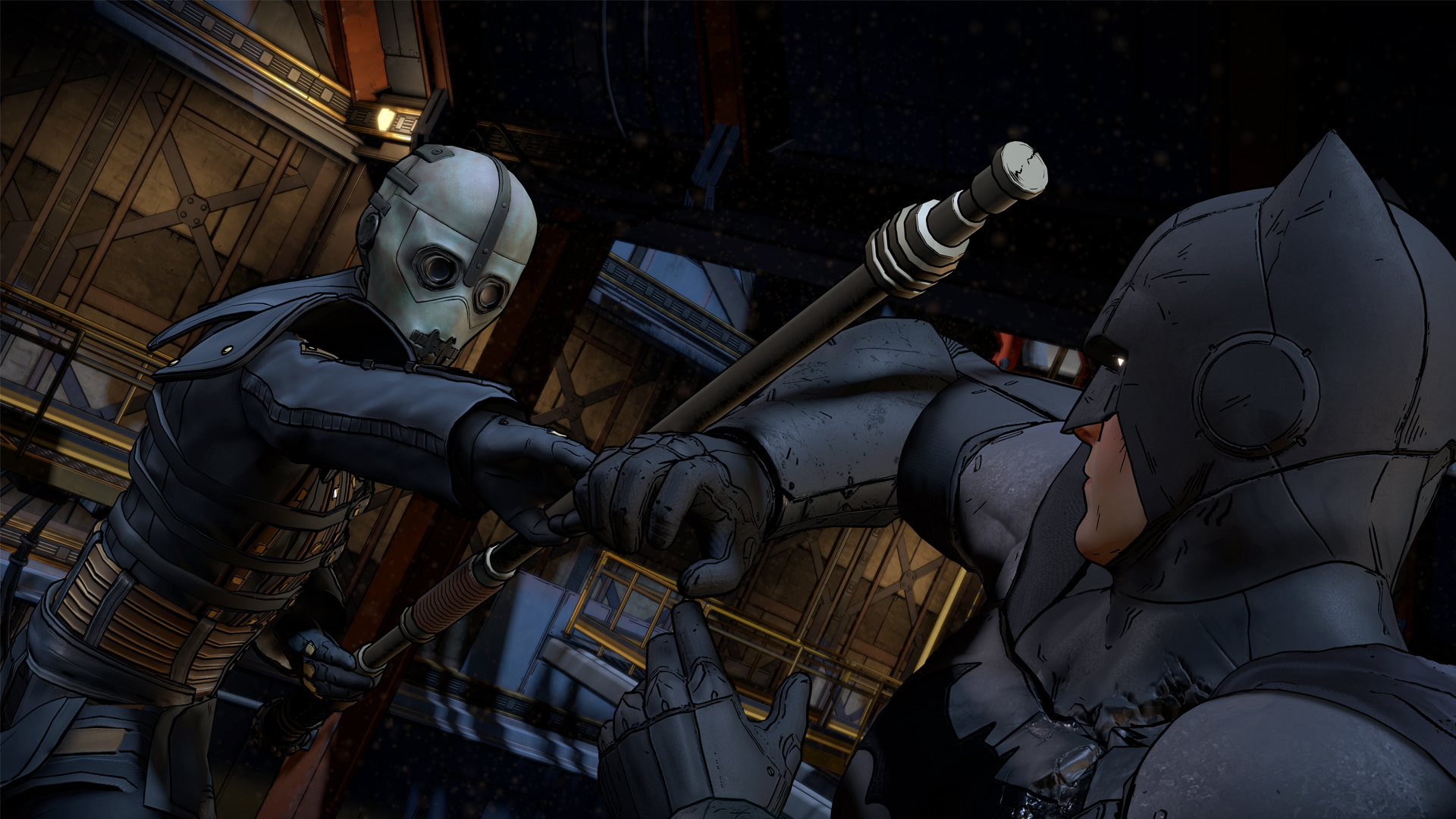 Batman episode 3 follows the events of Gotham City’s Mayoral debate turned tragic hostage situation. Bruce Wayne and Selina Kyle are on their way to pay their dear friend, Harvey Dent, a visit at the hospital.

Side note: If you’re in need of a quick refresher on the events leading up to this point, you can quickly catch up by reading our episode one "Realm of Shadows" review, and episode two "Children of Arkham" review.

Before the two can even get through the hospital room door, Selina excuses herself because she cannot bear to see Dent in his condition. Depending on the choices you’ve made in the previous episode, her reasoning will vary. Bruce Wayne goes on to endure this one alone and you’ll quickly realize it’s a difficult burden to carry.

Harvey Dent is physically and mentally changed from his encounter with The Penguin, and the entire time you’ll be torn between being honest or supportive of your long time friend. After some friendly consoling and for the first time in this series, Harvey and Bruce will witness the bright and shining bat signal displayed high above the Gotham city skyline.

Bruce takes his leave, dons his suit, and goes off to meet commissioner Gordon who’s in the midst of a crisis. On one hand, you can help Gordon save a cop who's gone rogue, and on the other hand, you can save Harvey Dent who’s forced his way out of the hospital and is now being terrorized by the Children of Arkham.

Still stewing in guilt from my visit with Dent, I opt to go help him. But after you save him, you'll instantly regret that decision. As Dent accuses Batman of perpetuating crime in Gotham city, you'll learn that the Penguin and his henchmen men have somehow gained access to the GCPD network and is tracking their every move.

Bruce makes plans to meet up with Lucius Fox the very next day in hopes of finding some answers. On your way to meet him, you'll be informed that in light of recent events, the board at Wayne Enterprises will be asking Bruce Wayne to step down as CEO of the company, and in his place will be none other than Oswald Cobblepot.

As a witness with limited control in the events outside of those affected by your decisions, it's here where all the repressed frustration comes to a head. While you’ll be tempted to engage in more reckless But since you are hyper aware of how Telltale Games work you'll likely opt for the choices that will have the least repercussions.

Despite feelings of dejection you’ll follow Batman as he pieces together Penguin’s next sinister move while investigating a seedy warehouse. He’ll be forced to face off with a new nemesis who threatens Catwoman's life but ends up getting his butt kicked.

Batman is then rescued by Catwoman and taken back to her apartment where the two get pretty cozy. The following day, Bruce formally announces his resignation from Wayne Enterprises.  and just as you begin to feel that you have maintained some sort of pride through this whole debacle, Batman Telltale Episode 3 throws you for a loop.

Without giving too much away, I would say New World Order is arguably the best episode of the Batman Telltale Series thus far. There's no sense of control and no matter what path Bruce Wayne or Batman takes, there's no recognition. Although we’ve found a bountiful of betrayal where it hurts the most, we’ve also found love in a very unexpected (but relatable) place.

There's some comfort in all the chaos as Bruce Wayne begins to form his own identity and sheds his ‘trophy son of Thomas and Martha Wayne’ persona. Most importantly, Batman The Telltale Series - Episode 3 marks the fall of Bruce Wayne and the rebirth of the Batman.

For more great storytelling on Indie Obscura, find out if Telltale is working on a Guardians of the Galaxy game, experience the trascendent journey of Owlboy in our review, and check out these awesome indie games of the month.