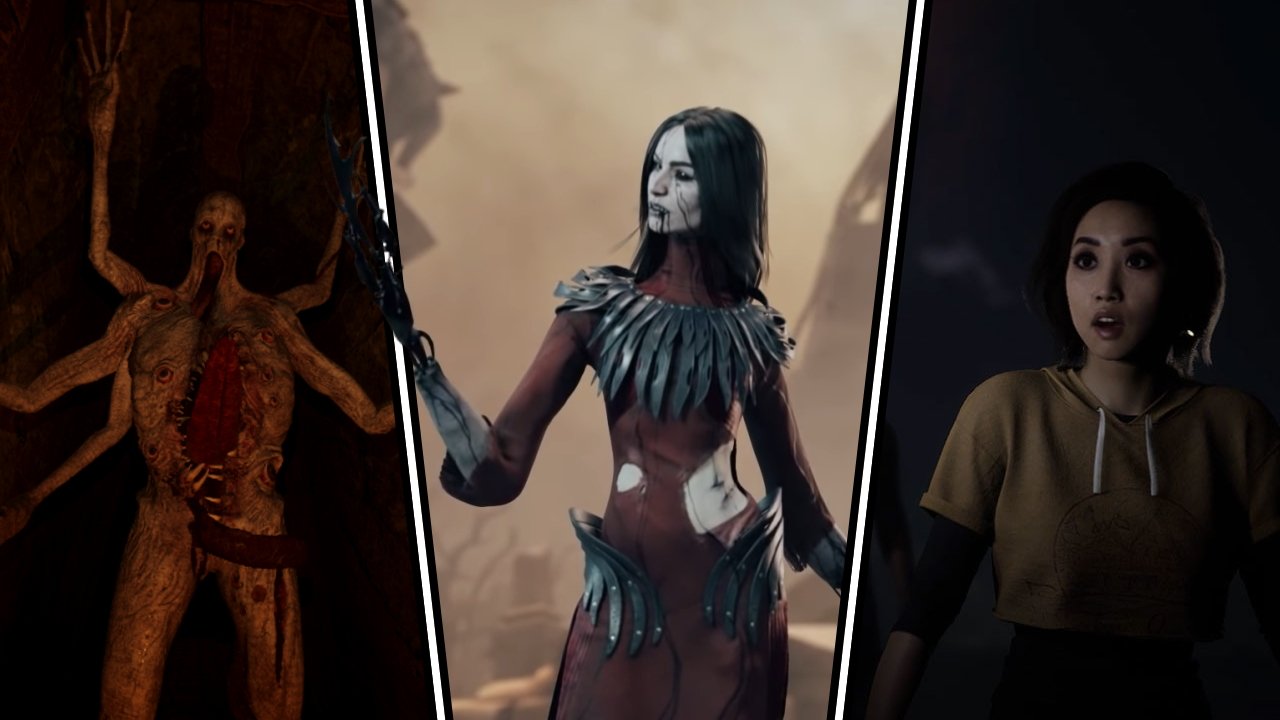 The best multiplayer horror games to play with your friends

Friends who scare together, stay together. After all, splitting up is just bad form when a monstrous killer is out to get you! Our roundup of the best multiplayer horror games to play with friends in 2022 will deliver all the spooks and jumps your cravenly crew are after. We've covered a number of different game styles, so your can be sure your scares never get too familiar by jumping between each haunting game on the list.

The best multiplayer horror games to play with your friends

Explore a haunted house! Hunt for the unsettling signs of spirits! Get murdered by a revenant as your friends hide in a closet! Phasmophobia is like every haunted house TV show you’ve ever seen, only here the ghosts are very real and likely to have you for a midnight snack if you aren’t careful.

Along with VR support, Phasmophobia makes the genius decision to use your microphone inputs. You can ask the ghost questions as you attempt to capture occult footage, but be prepared to run and hide if a hunt begins. Phasmophobia has received a steady stream of updates since release, adding new maps, a new hub area, improved visuals, cursed possessions, and a wealth of new ghosts with terrifying systems like the ability to impersonate other types. Be warned, Phasmophobia in 2022 is a more difficulty game than ever!

Haunted houses proving a little too pedestrian for your tastes? Forewarned puts the "arg!" in archaeology (sorry) as you and up to three friends wander through Ancient Egyptian temples in search of relics. If the spike traps and swinging axes weren't enough, these tombs are infested by mummies, mean spirits, and a few things far, far more terrifying. Forewarned is like Phasmophobia's stranger, less predictable cousin, but just as likely to murder you on a moment's notice.

Much like Phasmophobia, the aim is to pick up on clues to identify the grand horror residing within the chamber. But here a successful guess will see you scampering through the hallways in search of an exit before the mighty undead menace you've roused gobbles you up. It's also got full VR support, if you're brave enough to delve into the dark more personally.

Work with three friends to escape from the clutches of an unstoppable killer bent on stringing you up and watching you suffer. The problem? That killer is one of your mates, or sometimes even you! Dead By Daylight’s Survivors are weak, but with stealth and numbers on their side, they might be able to activate the generators necessary to open up a path to freedom.

Behaviour Interactive’s 4v1 multiplayer release remains one of the best online horror games to date, even if it is a litle bloated with perks and systems to wrap your head around. Since release, the game has been flooded with new Survivors and Killers to scamper around as. The huge success of the title has seen official partnerships with Hellraiser, Silent Hill, Ash vs Evil Dead, Halloween, and more. That means you can enjoy seeing classic horror movie icons like Freddy Krueger mixed in with gaming big bads like Resident Evil's Nemesis, each offering a unique system for hunting down their feeble human prey.

Supermassive Games has proven itself the master studio at recreating cinematic horror in gaming. The Dark Pictures Anthology – the previous entries to which include Man of Medan and Little Hope – sticks you in the boots of typical horror movie protagonists, making key decisions and attempting to keep them alive during tense quicktime segments. Find yourself shouting at horror movie protagonists and declaring how much smarter you’d be? This is your chance to prove it.

Supermassive Games' original hit Until Dawn is still an absolute corker, but the Dark Pictures titles offer shorter bursts of tense terror that a group can enjoy in one or two sittings. The latest entry, House of Ashes, is set in an ancient Sumerian temple beneath modern-dar Iraq. US and Iraqi soldiers find themselves lost in the dark corridors beneath the earth, but they're not the only living things down there. It's up to you to keep them alive through decisions and quick-time events, and a single slip up could see someone lost to the catacombs forever. Good luck!

Another release by Supermassive Games, The Quarry is a larger, more involved horror story than The Dark Pictures' horror snapshots. On scale, it's more akin to a refined sequel to Until Dawn, and a brilliant (if a little less scary) game too. Riffing on classic teen horror, The Quarry follows a group of camp councillors who stay one night too many at a sinister summer camp.

As mysterious figures and monsters begin to appear in the woods and surrounding buildings, will your choices keep the flirty and often foolish cast alive, or lead them to certain death? With less reliance on challenging quick-time button presses, The Quarry is a more welcoming experience for those less game savvy, so ideal for group gatherings. Pick it up in time for Halloween and you can even snag free '50s outfits to dress everyone in.

So you've joined a demonic cult. We've all made mistakes, but at least this is one you might be able to rectify. Each of Devour's harrowing maps is prowled by the posessed body of one of your cultist colleagues, now transformed into a hideous beast. You and your friends must gather and cleanse 10 cursed items in the hopes of curing them, but that's far easier said than done.

In Devour's base level, you'll be rummaging through an American woodlands shack to grab and roasting demonic ghosts, but later levels like The Inn involve more complex tasks including purifying spider eggs before burning them at matching shrines. Your only defence against the demons and their leader? A UV torch with limited charge.

The challenge (and weather) ramps up the closer you come to completing your task. By the closing stages demons will flood the halls, and your posessed ex-cultist colleague will be a whirling mass of noise and terror, stomping through the halls as flashes of lightning illuminate the dark Devour is far from easy to win, so bring a coordinated team if you're hoping to escape the clutches of Azazel.

Reckon you’re a wilderness survival expert? Got Bear Grylls skills? Well you might have what it takes to keep your friends alive when the monsters start calling in The Forest. This open-world survival game is one of the most unsettling on the market, as enemies often prefer to keep their distance, watching from afar before striking when you least expect it. And once you start delving into the caves and depths of the woodlands, the humanoid figures stalking your camps will be the least of your concerns.

The forest is a little older than most games on this list, but it remains an immensely popular multiplayer survival game. Playing solo is a true test of fear, but bring a few friends and you might just be brave enough to tackle the mysterious creatures and cannibals lurking in the woods.

Prefer a B-movie romp to genuine scares? Evil Dead: The Game is another 4v1 horror-laced showdown based on the iconic movie series. One player takes command of a Kandarian Demon, summoning Deadite minions and taking direct control of them, haunted trees, and more to attack Ash Williams and his friends. The four human survivors -- all drawn from the Evil Dead universe -- must cooperate to loot weapons and secure key items that will let them seal the breach to another realm. It's still, gory, entertaining stuff, best enjoyed with a group of four friends.

All the above options too spooky for you? Ghostbusters: Spirits Unleashed takes the 4v1 format and smothers it in officially licensed slime. One player picks a ghost type and attempts to fully haunt a building by posessing items, spooky civilians, and spreading chaos. The other four players take control of ghost hunters who must work together to wipe our rifts and catch that ghost before he conquers the building!

Unlike Dead by Daylight and other 4v1 games, the ghost hunters can't die in Spirits Unleashed, so you'll never be knocked out of a game early and left waiting for your friends to finish. Ghostbusters: Spirits Unleashed blends parts of prop-hunt gameplay with detective work and proton-pack blasting, making it a great multiplayer spooky blast for the timid hearted.

Those were our picks for the best scary games to play with your friends. Got any other spooky suggestions? Let us know your co-op horror game picks in the comments below so we can all have a harrowing time together! We also have a roundup of all the big gaming Halloween events for 2022, just in case you were feeling like an extra dose of spooks.