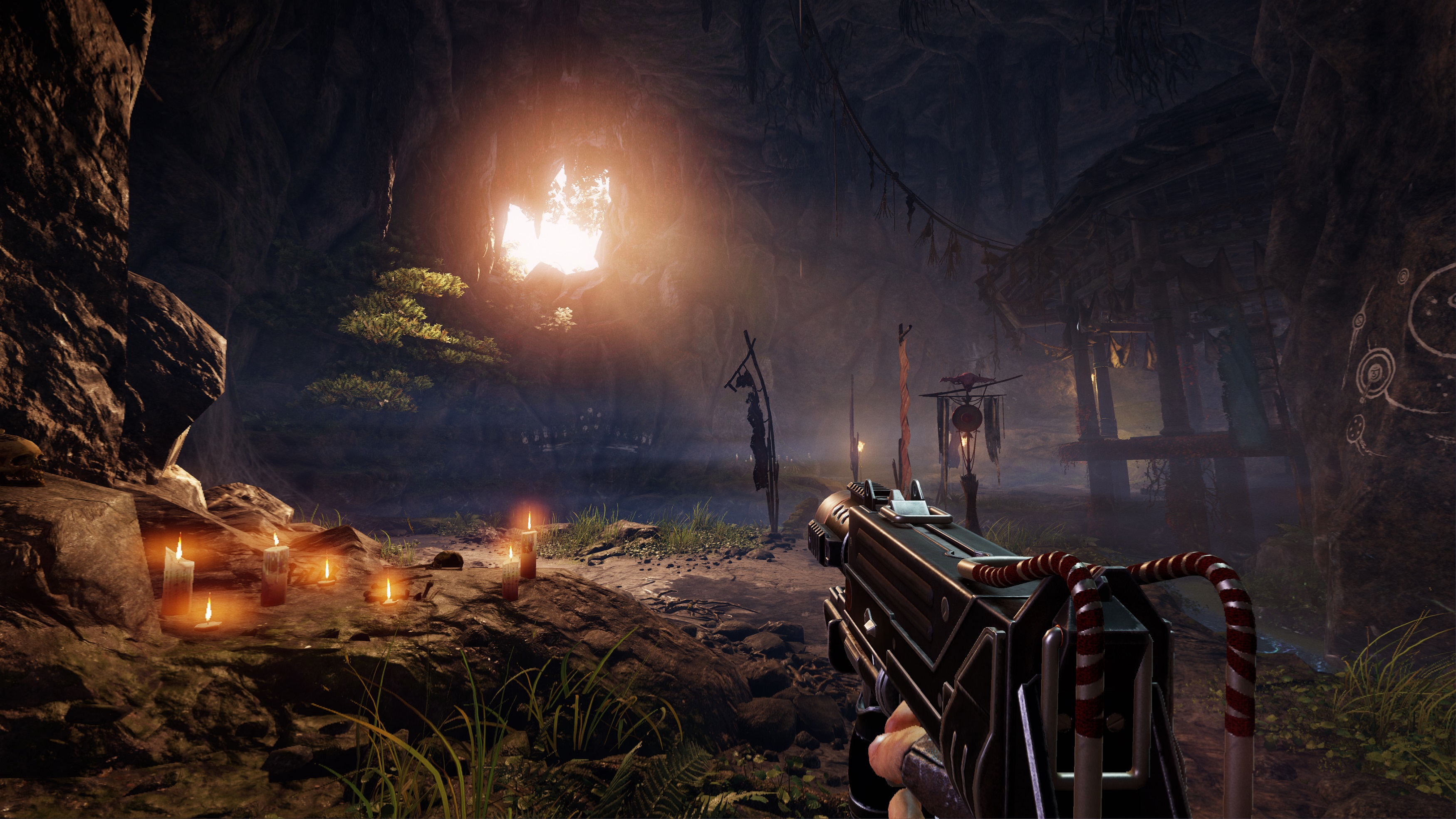 Shadow Warrior 2: How To Find The Developer Room

Check out Croteam’s latest entry in the Serious Sam franchise.

If you’ve played Shadow Warrior 2, you’ve undoubtedly taken the time to explore around Lo Wang’s aptly named “Wang Cave” and discovered some of the strange Wang Cave secrets hidden inside. In addition to the hilarious puns that can be made, there are quite a few goodies and secrets hidden within the Wang Cave including a secret developer room. Have you found them all yet?

If not, here are all the Wang Cave secrets in Shadow Warrior 2!

How To Find The Hidden Developer Room

If you haven’t had the pleasure of venturing into the lowest depths of the Wang Cave, you’re missing out on one of the coolest Wang Cave secrets. To find the hidden developer room in Shadow Warrior 2, walk into the Wang Cave and direct your attention to the left. There, you’ll find a “Hogs” drumset resting on the stage. Head through the curtain behind it.

Once you're behind the stage, you will find words written on the wall to your left. Referencing the movie The Wizard of Oz, the text reads... “Pay no attention to that man behind the curtain!”

Straight ahead through the hall is a door that cannot be opened… but can be walked through. To pass through the door, keep walking forward like Harry Potter heading off to the Hogwarts Express via Platform Nine and Three Quarters (it's the best comparison we could do, we apologize).

Behind the door, you will see more text that reads "We are the Wangs resistance is futile," which feels like a reference to the Borg from Star Trek. If that's the case, consider us assimilated!

Proceed down the stairs and into the basement. There, you will enter the hidden developer room and see a giant group portrait of the Flying Wild Hog development team in front of a snazzy Devolver couch.

In addition, be sure to take a look around the developer room at the awesome wall art, some text on the floor reading "love is in the air," and a Statue of Fortune (check by the creepy Chinese doll on the crates).

Before you enter the Wang Cave, take a look to your right and you’ll see a humorous drawing of a tiny Wang.

After entering the Wang Cave, turn around and look up. Here, a Legend of Zelda reference is scrawled on the wall reading... “It’s dangerous to go alone! Take a Wang with you!”

While you’re still facing the door, you will note three arcade games: Hard Reset, Hotline Miami, and Serious Sam. What do all three of these games have in common? They were all published by Devolver, who also published Shadow Warrior 2.

There are stairs leading down to an area you cannot access. However, on the left side is a restroom sign with Wonder Woman and what appears to The Wrath.

Venturing upstairs, you'll come across a glowing blue fish tank. As you get closer, you'll note text scrawled it which reads "Just keep swimming..." This is a reference to Finding Nemo, and on the counter to the right of the fish tank rests clownfish. Poor Nemo!

If you turn to your right, there's a 2016 calendar on the wall which is actually in Polish instead of English. This is because the developers at Flying Wild Hog are Polish! The months from the bottom to the top are Luty (February), Styczeń (January), Grudzień (December).

To the right of the Polish calendar is a fridge. Swat the fridge door open to find the text... "And all the cake is gone. You don't even care, do you?" This is a reference to a quote from GLaDOS in the original Portal game.

Returning to the Polish theme, you'll find a new chainsaw weapon in Wang's office dubbed the "!" which is a reference to the city of Warsaw, Poland (home of the Flying Wild Hog headquarters).

On the balcony, there's a vending machine (which I destroyed via Chi Blast) that has Pac-Man on it. Waka waka!

After collecting your goodies from Wang's office, there's a room on your right. In there, you'll find an item as seen in the image below. However, if you use your Chi Blast here (or slice and dice) to destroy the room you'll also find a Fortune Cookie! I highly recommend destroying as many things as possible in Shadow Warrior 2, as it's the best way to find Fortune Cookies and Wanglopedia Entries.

BONUS: If you have a thing for Fortune Cookies, you'll find another one to the right of the Laundromat. All you need to do is smash a few crates and explosives to find it. To reference a Hatebreed song, you will essentially want to "Destroy Everything" that you possibly can in order to find all of Shadow Warrior 2's secrets.

Did any of these Wang Cave secrets surprise you? What about the secret developer room? Let us know in the comments below!

The Wang Cave is only the tip of the iceberg, as we will be continuously posting guides on how to find all of Shadow Warrior 2's secrets including those elusive Statues of Fortune!