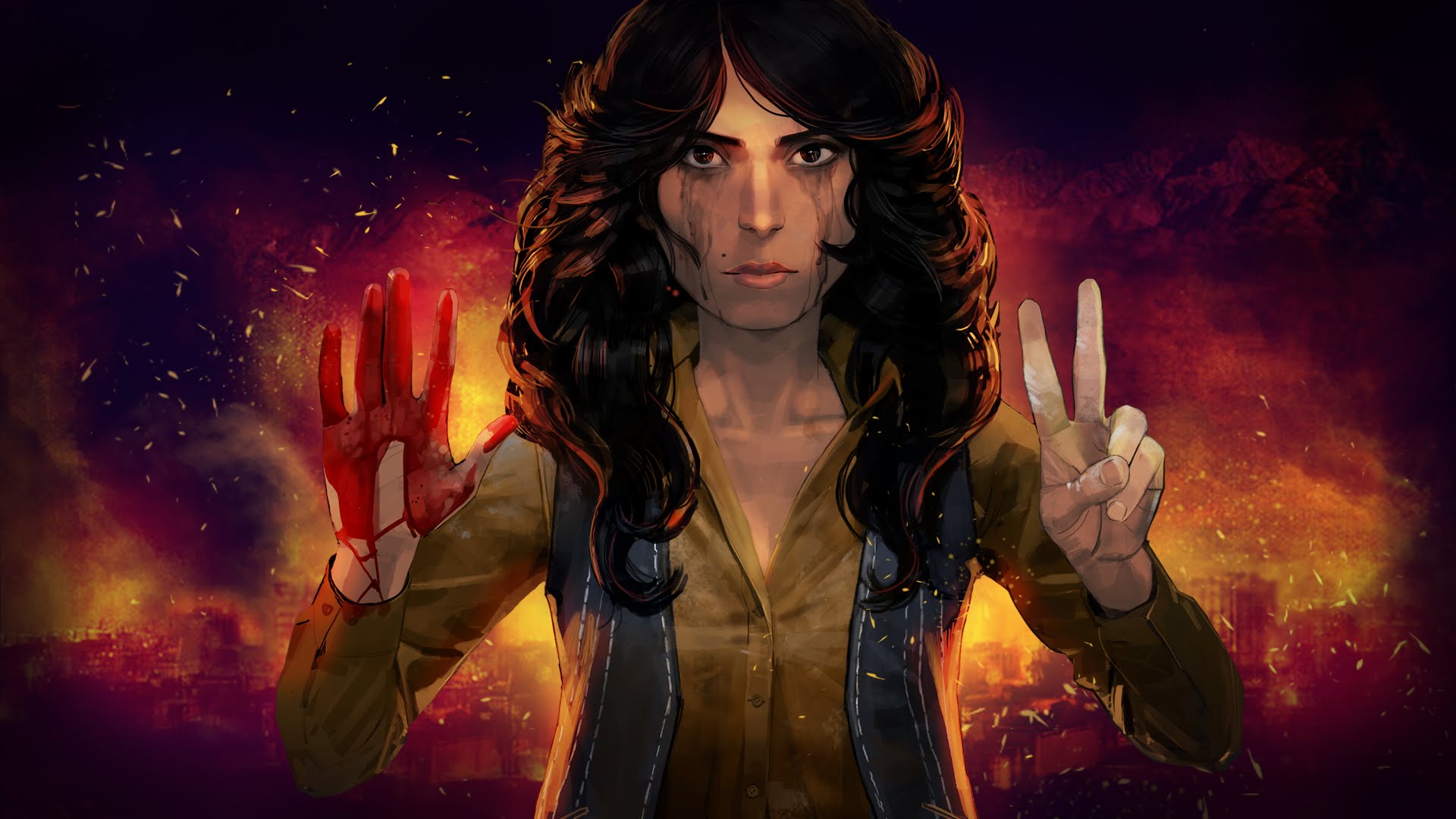 iNK Stories are a small team of directors, producers, developers, and artists. Spearheaded by founders Navid and Vassiliki Khonsari, iNk Stories are breaking the boundaries of video game storytelling. Their first entry into the world of video games, 1979 Revolution: Black Friday, has been making waves in the industry.

Not only has the game itself gained critical acclaim, it has also been outwardly slandered as propaganda by the Iranian government. We caught up with iNk Stories in their studio in Brooklyn, NY, to learn more about their unique approach to storytelling, and to talk about how 1979: Revolution: Black Friday is changing the way people look at video games.

We ran into Navid while on our way up to their chic studio suite. As he ushered us inside, the team greeted us warmly, with everyone taking the time to unplug from what they were doing to shake hands and exchange names. While the video team set up for the interview, I took in all of the charming idiosyncrasies scattered throughout the office.

Navid’s conceptualizations were scrawled neatly on the whiteboard, along with a list of game awards the team has either achieved or were currently striving for. Stickers of the game could be found sporadically on furniture, and the logo of the studio was carefully tagged on the wall. Vintage cameras, a cassette player, tapes, and other familiar artifacts from their game were also inconspicuously laying about. It was at this moment in time when I realized just how involved they are in what they do.

While the team finished setting up, we learned more about the driving force behind iNK Stories, as Navid and Bessie gave us a quick rundown on their background and expertise. Both Bessie and Navid have an impressive history in filmmaking. Navid is a veteran of the gaming industry, having worked with publishing giant Rockstar Games (the studio behind Grand Theft Auto), and Bessie is an accomplished documentary filmmaker and visual anthropologist.

As the video interview kicked off, you could hear the rattle of trains as they passed over the Manhattan bridge. Throughout the interview, Navid effortlessly created and maintained a dialogue that evolved into a profound interview which easily exceeded an hour in length. During this time, we learned more about the inspiration that drove 1979 Revolution: Black Friday, and the motivations behind the socio-political game.

Navid began with how his life experiences bleed into his work. 1979 Revolution: Black Friday began as an emotionally driven project stemming from the memories of his ten-year-old self, witnessing firsthand the events that led to the Iranian revolution. Upon its release, the game quickly became a cultural phenomenon because of the way it illuminates the experiences of the Iranian people at the time. He then went on to explain how seldom we hear about how deeply these events impact them.

Navid followed up by explaining that the team did a ton of research on the trajectories of revolutions, and how a vast majority of them follow a similar path. The team hopes that the game will shed light on the plight of the people, and inspire future revolutions to not make the same mistakes as ones in the past. The team stressed that they tried to avoid taking any stand on the politics of the time, but that didn't stop Iran's National Foundation for Computer Games from banning the game in Iran. Like most things, when you tell someone they can't do something, it only makes them want to do it more.

Localization and Making an Impact

Now that the game has been out for a while, the team at iNk Stories are hard at work localizing 1979 Revolution: Black Friday in different languages, including some lesser considered ones. By translating the game in Farsi, Turkish, and Russian, they want to put the experience in the hands of people who are currently going through revolutions themselves. Notably, the people fighting to remain free from Russian aggression in the Ukraine, and those caught in the uprising in Turkey this summer.

"We decided to localize it in Turkish, and this is, again, another place that’s going through some major, major changes. Often people, even in the press, refer to what took place in Turkey as 'Could it be the next Iran of 1979?' The ability to give this experience to a lot of people, to not have the barrier of language but be able to understand it, is exactly what we need to do if you’re trying to establish a new genre, and if you’re trying to open up a new way that games can have an impact," Navid said. As for Farsi, Navid explained that it felt right considering the lengths they went to keep the experience uniquely Iranian.

Bringing the game to multiple platforms is also extremely important to the team. 1979 Revolution: Black Friday is currently available on iOS, and is in the process of being ported over to Android. Mobile is an important medium for the team because it is the platform with the largest reach, and aids in the goal of getting the game into as many hands as possible. They expressed how accessibility is extremely important to iNK Stories, due to its ability to cover the kind of narratives that can make an impact.

Bringing these types of narratives to the forefront is somewhat of a challenge for iNK Stories, as it is important for them to maintain the dignity behind each person's experiences. Navid expressed how finding the balance of an accurate, impactful, and entertaining narrative is important. He went on to explain that a game based on true events runs the risk of becoming too preachy. iNK Stories founder Khonsari's background in anthropology was an imperative part of developing the colorful and dynamic narrative in 1979 Revolution. She called the process exciting, but one full of responsibility and burden.

Led by , the team spent a painstaking amount of time making sure they heard about the events of the revolution from all perspectives.

"Conducting more than 40 interviews speaking with academics, and scholars,and professors, and all different people to flesh out the very rich fabric, [a] mosaic of what events took place at the time from a dynamic group of voices. Religiously, ideologically, politically, [and] generation wise."

This level of inquiry is evident in the narrative events that take place throughout the game. Historical images give you visual references, while culturally, Iranian food or an inside look at Islamic prayer tell a story that extends beyond the political.

The amount of care and attention spent on character development and narrative is astounding, especially when placed in juxtaposition to the size of the team. Bessie explained how each and every voice actor was consciously cast with an Iranian background and maintained a personal connection to the event.

They even went to great lengths to ensure that their characters looked, sounded, and accurately represented the culture. She spoke on the challenges the team was confronted with, especially in an industry that is not used to correctly portraying unconventional characters. She went on to explain the struggles of dealing with talented video game artists, having to iterate several times to make sure that the female characters didn't feel sexualized, saying that they had to be "much more dynamic than that."

It then became natural for us to inquire about the importance of bringing a female narrative to the game, especially within the context of non-conventional roles and representation.

"It was very important to everyone on the team. Not only for the historical accuracy of the but unfortunately women became the largest collateral damage of the revolution and the most misrepresented voices who were very active in setting the wheels of movement and process during the revolution."

As Bessie finished her thoughts, it became clear to us that three hours had passed and it was now half past five. After we thanked them for their time and packed up our things, Navid accompanied us on a walk through Brooklyn Bridge Park, telling us about what the future held for iNK Stories. He explained how the team wants to circle back and tell more of the story between the events of 1979: Revolution before moving on to other projects, while simultaneously working on iNK VR, which will be a whole new way to step into the rich narrative that they have created.

iNK Stories passion to be as true to life as possible, while also pushing the boundaries traditional videogame storytelling has been inspiring. Make sure to check out iNK Stories' website and tTwitter to keep up with them. If you want more IN_DEPTH, check out our previous episode with Astroneer creators, System Era Softworks.