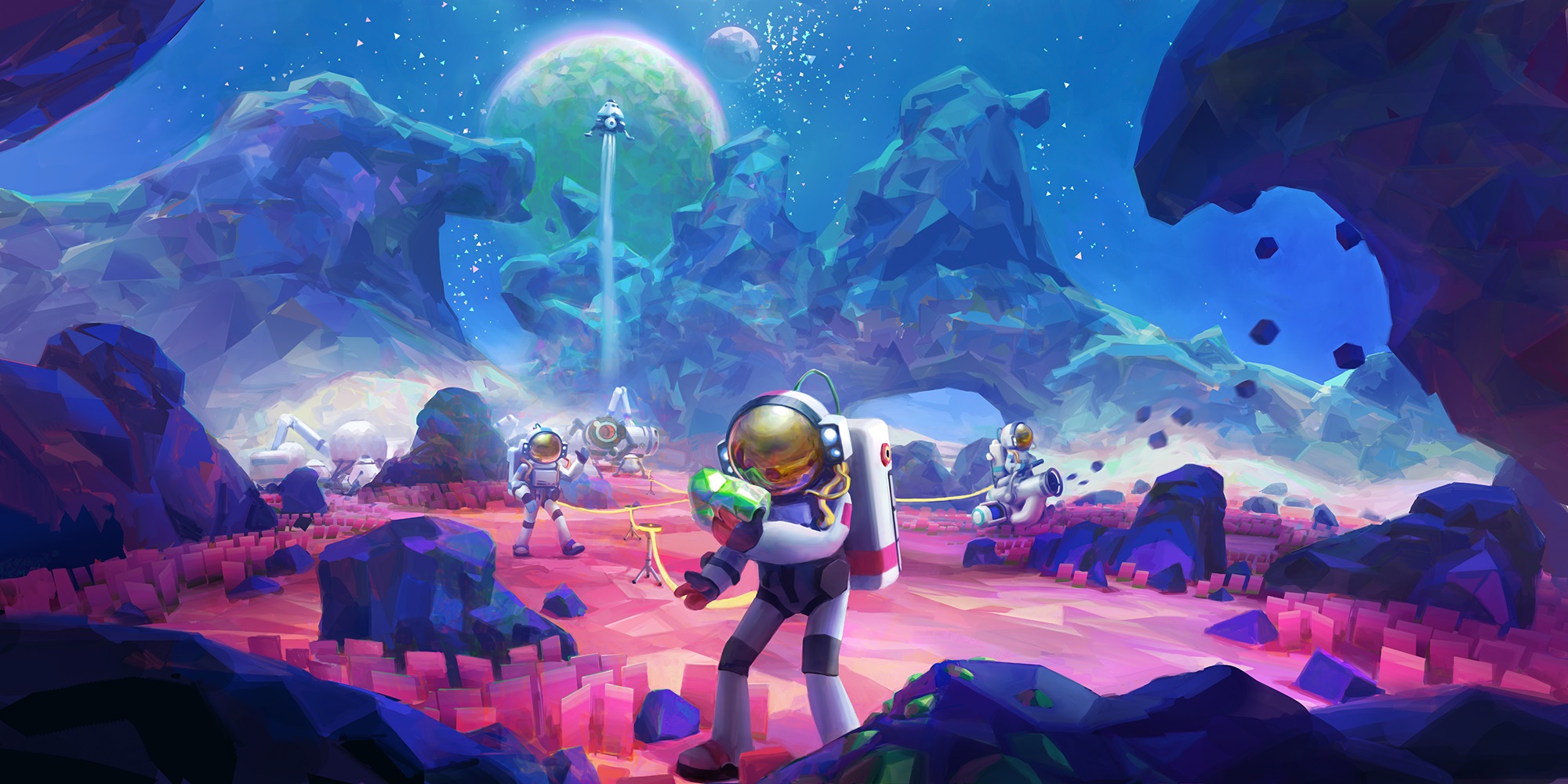 System Era Softworks is a rockstar group of developers in the indie world. Its members have worked at AAA development houses like 343 and Ubisoft, and their collective knowledge has resulted in their first title , which will release sometime later this year. Indie Obscura wanted to learn more, so we followed them around PAX West to see how development was going, the difficulties of doing shows, and how their backgrounds at big developers have helped and hurt them.

For The Kid In All Of Us

I first met System Era’s Adam Bromell when he was an artist working at Ubisoft. was but a twinkle in his eye, but when I saw early development images, there was an inevitable “something” about it. Fast forward a few years, and Adam and his friends at System Era are at PAX West, the final show before is revealed to the public before release. I sat down with a different team member, Brendan after the floor closed one night to talk about how it all feels.

“It feels really good that it’s the last because now it will be, kind of clear… not clear skies, but full steam ahead to launch. We will be heads down and focused," explained Brendan.

has been showing the game at all of the usual game events like GDC, PAX, and E3, and gaining accolades throughout. Brendan remarked on the experience, “Having a show kind of regularly has been pretty good for us. It’s easy when you think that you’re far out, to fall prey to a sense of security that there’s a lot of time, and you can slow down too much.”

Another team member, Jacob Liechty, had a different perspective. “So, shows take up a lot of time that you could be using doing game development, but I think what we have all found is that after you go to a show and you come back and do work on the game, the work is much more efficient. You regain a perspective on what the game is and what it should become based on people’s reactions to it.”

When speaking about how people react to the game, Brendan told me, “The best experiences that I get out of these shows are when kids come and play the game. This is a game that I want my son to be able to play. He’s three and a half now, but once the game comes out he will be a little bit older and I want to play it with him.”

At one point while filming and chatting up the crew in their booth, a young boy (possibly 10), walked by seemingly mesmerized by what was happening on the screens. He and his older brother lingered for a bit, and eventually jumped in line to take a crack at the build. I had to leave for an appointment, but I heard from the team that he didn’t walk away for over an hour.

"Watching them [kids] play the game for the first time is excellent because they’re noticing everything in the game... in a way that adults don’t."

Jacob also loved watching young people interacting with . “Watching them [kids] play the game for the first time is excellent because they’re noticing everything in the game... in a way that adults don’t.” He seemed kind of surprised at that notion. “They are always kind of exploring and poking and testing the limits of the game, because they don’t have expectations that are already kind of built in from people who have played other games, especially.”

isn’t a “kids” game in the traditional sense, but its charming, simple to master mechanics and sandbox-like gameplay make perfect sense for imaginative minds and the kid in anyone, no matter the age. It’s also the first time that the team showed off multiplayer publicly. Brendan told me that the biggest crowds happened when people realized that multiplayer and that he loved seeing the zany stuff occurring when people interacted with each other in the game.

Bigger Is Not Always Better

System Era was founded by a team of developers who all got their start in AAA game development. We have all seen the “CREATED BY EX [insert name of developer] MEMBER” style marketing within the indie game scene. System Era seems to be at odds with the notion, as they are learning that having worked on a big title does not automatically equal a great indie product.

“We’ve got some heavy hitters on the team,” Jacob told me. “It’s fundamentally though, like what we’re doing compared to what we used to be doing, and that was like a big transition for each of us. Working on a project where the stakes feel much more emotionally high than they are a bigger project.”

The process of leaving their comfortable jobs at some of the biggest developers in the industry can’t be easy. Typically, members of big development teams work in a small contained area. Once they're finished with their portion of the work, it gets added to the other team member's contributions. With a team like System Era, everyone is tasked with wearing multiple hats which proven to be but is ultimately worth it.

“When everyone has investment in the whole thing, definitely tensions can run a lot higher, but that process is what makes indie games interesting,” Jacob said.

While talking to Brendan, the same topic came up, and he laughed and stated, “I feel like I have never been more of an adult... in some way you know?” He referred to the warnings that teachers gave him before he went off to college about growing up and being responsible. He compared this to his current situation, “When you work at a big company, there’s still so much that is, sort of taken care of for you,” he reflected, most likely looking back at his time at 343 industries. “Leaving the walled garden of the corporate culture, in America… that’s when you’re really on your own, and you feel how difficult that is.” He went on to explain some of those difficulties, like things as simple as having health insurance.

What I found interesting was the placement of on the show floor. This year, the was on the same floor and in the same room as Sony and and was literally 10 feet away from Bungie. These are companies that most of these guys have worked with in the past, and I wondered what the team thought of showing off their game in the (almost literal) shadow of some of the biggest names in the business.

“It is interesting. People will come up to you that you worked on those big games with," Jacob said. “People tend to be really excited for you. A lot of times it’s if they were a different point in life... if they were more lucky with how their finances played out even, that they would have done the same thing. They get to watch you do it and support you, and that’s always really great.”

I spoke with Adam about the possible worry of releasing around this time several months ago. The team had some concerns, as the game drew many comparisons to the looming Sony hype giant, No Man’s Sky. At first glance, these games seemed somewhat similar. They both feature procedural generation, although the System Era team clarified that this only happens from the “ground down”.

They also both feature resource gathering and take place in space, but beyond these ideas, the games’ core principles are extremely different. You know the rest of the story. No Man’s Sky released to middling reviews and a general feeling of disappointment. At its worst, consumers felt cheated. At its best, people may feel like they got all the space exploration they needed this year.

That hasn’t stopped the team from pushing forward, and the feeling I got was that they came out better after seeing what happened to the much hyped Sony title. “Expectations are really tricky,” Jacob began. “I’ve been pretty optimistic the past few months, and actually it’s been the shows that made me really optimistic. It’s not like we have the most massive following online that is watching our every single move, or it’s not like the press is constantly writing about us or anything. Knowing that when people play the game, it excites them enough to want to tell somebody about that, you just have to expect that is going to have to happen over and over.”

Most players and fans of the game have taken to saying that will be what No Man's Sky is not. The team announced this week that will come to Xbox Game Preview in December, which means it will be available for both Xbox One and Windows 10, as well as the previously planned release on Steam. The comparisons to No Man's Sky haven't stopped, but now it looks like fans of the game are seeing just how different the two are, and more importantly, they know what to expect.

System Era's list of seasoned veterans appear to be on a great track to produce one of the best indie titles of the year, not just using their AAA experience, but also because they won't allow that experience to hold them back from adapting, learning and taking feedback. If you want to get in on the action, you can check them out at their website as well as on Twitter.