Grab some goodies and celebrate the 10 year anniversary of League of Legends. 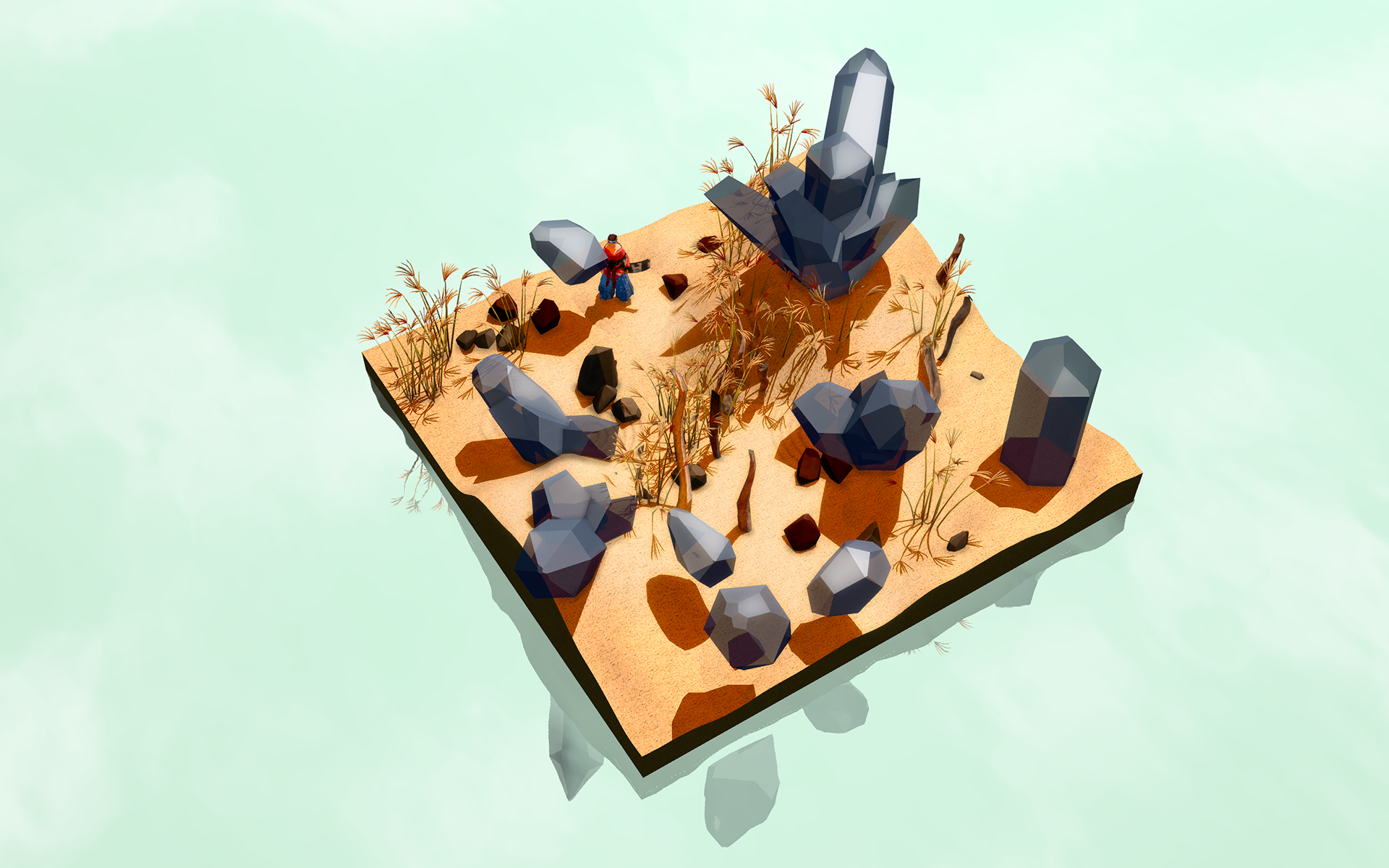 Miegakure is a 3D puzzle game with a twist: players utilize the fourth dimension to solve problems. The puzzles are presented on a tile with the player’s character able to move within the space, but it’s what lies out of sight that’s most intriguing. By pressing a button, the player is able to seemingly transform the world around them as the extra dimension shifts into focus.

We’re not talking about “time” as the fourth dimension, but a dimension that exists beyond our three-dimensional world. This makes for an initially bemusing experience as the world appears to distort and change. However, the brain behind Miegakure, Marc Ten Bosch, has been able to craft an experience that teaches the basic principles and then asks the player to solve four-dimensional puzzles based on what they’ve learned.

We’ve been following the development of Miegakure for a few years now and are extremely excited to have had the opportunity to write up a series of questions about Miegakure for Marc to answer.

1. Can you explain more about what Miegakure is and how its unique gameplay works?

"Miegakure is a game that takes place in four spatial dimensions. Our universe has three spacial dimensions plus time. This game has four spatial dimensions plus time. This works because in a game every object's position is represented by the computer as three numbers, one per dimension, and in this we just use one number. Computers basically just work with numbers, so one number doesn't matter to them much. But our universe has only three spatial so how do we show 4D objects?

The way we chose is that we only display three dimensions, but allow the player to trade one of them for the fourth one by pressing a button. This allows the player to see and move in all four dimensions, three at a time. More specifically we take a 3D slice through the 4D world and display it. This is similar to how one might take a 2D slice through a 3D object, like an MRIs for example. As the slice changes what is displayed seems to be deforming, but really it is just the point of view that is changing. For a long time, people have been trying to imagine what you could do if you could move in 4D, and this game lets you do these things.

For example, if you have a completely closed building it might not be closed in the fourth dimension, so you could go inside and steal what it contains. Or you can bind two rings without breaking them. Or object might appear to float in mid-air because they are attached to something you can't see because it is out the fourth dimension. Each level is about some interesting consequence of being able to move in 4D like that."

2. What were some of the key inspirations (including Flatland) behind the creation of Miegakure and how did they influence the development process?

"When I first started working on this game I knew I could build it but it wasn't so clear what you would do in it that was interesting and specific to the fourth dimension. It was eye-opening to read Flatland and many other books that talk about what a world with an extra dimension of space would be like and what you could do if you were able to move in 4D.

In terms of games, Braid really showed that you could seriously explore a concept (such as rewinding time) using a puzzle game structure: each puzzle could be a specific consequence of the mechanic. I am also inspired by the JRPGs I played growing up such as the Final Fantasy and Chrono series because I want the game to feel like a world, and your actions mattering to that world, and not just a series of puzzles."

3. The choice the world existing in a nebulous void on a tile is fascinating, do you think this concept could work on a larger, open-world scale?

"Each level happens within a small chunk of 4D space (but you see only a 3D cross section of it). This is because we want to keep to a minimum what the player has to think about at any given moment. Think about how much more stuff you can fit in a cube versus a square. The same thing happens here: a four-dimensional cube can contain a lot more things than a three-dimensional cube. So even though the space you see seems small, it is actually quite large. I think you might be able to increase the scale, but I wanted to focus the gameplay on really understanding what is there, instead of getting lost in a large space."

4. While creating Miegakure, what were some of the challenges that you faced and how did you overcome them?

"Making a 4D space that looks good and looks like an actual world (with trees and rocks, etc...) has never been done before. Similarly, making a 4D game that is understandable for most players has never been done before. Anything one takes for granted while making a game has to be re-thought: things like collision detection, applying textures to objects, how lighting is calculated, etc... It was a huge challenge to make the game look good while still keeping it understandable for players.

For example, the game uses these large four-dimensional blocks as the large-scale features of the world that you climb on and interact with, basically the 4D equivalent of Minecraft tiles. However, as you know from looking at Minecraft, a world made of large cubes is not very good looking. So we struggled with ways to make the game look better, without being able to change the shape of the cubes, since it is very important for gameplay that they remain simple. Our solution involves adding other objects on top of the cubes, such as rocks and trees, that do not affect gameplay very much. At first, I didn't know how to even display more detailed objects like that in real-time in a 4D game!"

5. You mentioned in your speech “Exploring and Presenting a Game’s Consequence-Space” at Practice 2015, that you want Miegakure to be non-verbal so that the player can make their own discoveries. Can you go into more detail about why this aspect is important in Miegakure?

"It feels terrible when a game keeps telling the player what they should be doing all the like many modern games do. It takes them away from the since they end up just mindlessly following the prompts. This doesn't give them the space to understand things for themselves. So if you are serious about making players understand something using a game, a non-verbal approach is much more powerful.

Us humans can learn by playing with objects and being immersed in an environment. For example, by playing with toy balls as kids we indirectly learn about gravity and many other things, or we can learn a language simply by living in a country for a while. The other way is to learn from books and teachers, which is usually more specific and in-depth, but often builds upon hands-on experience. For example, when we learn about the specific equations used to model gravity we can use our experience throwing balls to base ourselves on. I think games are naturally suited the first, non-verbal, kind of learning."

6. You don’t see developers working on fourth-dimensional games like Miegakure. Why do you think this is, and do you feel more developers should experiment and attempt to make games that take advantage of a fourth dimension?

"It is probably because it is very difficult to do right. I have seen many failed attempts that were unplayable. I think in general more games should try to be about interesting things. One category of such things is exploring different rules for our universe, like high-dimensional spaces, curved spaces, relativistic effects, quantum effects etc... I would love it if game-designers explored these things more.

It requires more mathematical skill but it would be so much more interesting! But really I am interested in any game that properly explores its subject matter, and I feel like this is already happening with games like Papers Please that explore border control for example."

7. When working with Miegakure’s four-dimensional world, did you have to make a decision on whether or not gravity would work in a single direction?

"Yes, one guiding principle for the project is that the 4D world should feel like a 3D world when you take a slice of it, so I had to make gravity work consistently in that case. So in the game, the fourth dimension is a “horizontal” direction, like north/south and east/west. So at any there are actually three directions you can walk along while remaining on the ground, instead of two."

8. At the moment, are there any other ideas for future projects that you’re mulling over in addition to work on Miegakure?

"I have a side project that kind of spun off from Miegakure, and is also 4D, but I am not talking about it yet. I try not to think too much about what I want to do after this game is done, to remain sane. I have a ton of old ideas, but I need to reconsider them since making this game has changed my perspective on design so much. I am much more precise in my approach now."

9. If you could team up with another indie developer, who would it be and would you create with them?

"That's a good question! In general, I kind of like to have full creative control so teaming up with someone sounds tiring. It could be fun to team up with Jonathan Blow since we tend to agree on a lot of game design stuff, but it would have to be for something small."

10. Finally, what advice can you give to any indie developers looking to get into video game design?

"Learn to program. That one is obvious. This is biased toward what kind of games I would like to see, but: learn something deeply and make a game about it. It could be math, but it might also be history, geology, astronomy, a foreign language... I think the world is ready for more games like that."

For more indie game interviews and features, be sure to check our interview with Jason Kim of Cardboard Utopia, a chat with Saran Walker from Offensive Magenta Games, and our developer interview with the guys at Vile Monarch.