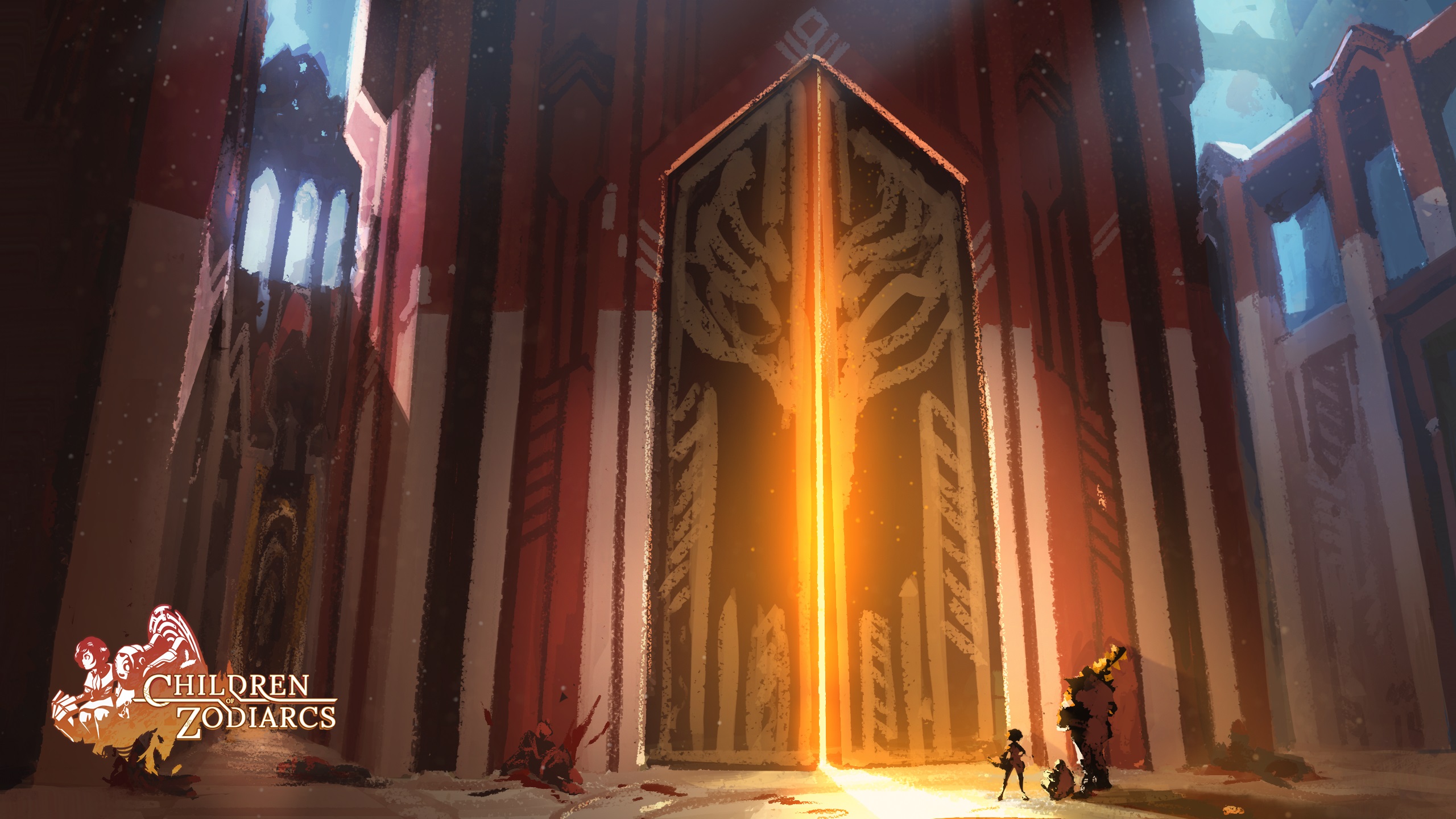 Cardboard Utopia is a new indie game studio currently at work developing a game entitled Children of . We recently sat down with Cardboard Utopia founder Jason Kim and crew to learn more about the indie studio and their work on their upcoming indie title.

1. Who is Cardboard Utopia?

“We’re a new indie studio hanging our hats in Montreal, Canada. I started the studio solo in 2014 and the studio has been slowly growing over the past 2 and a half years. Most of us are veterans of the games industry having worked on PS1 to current­-gen consoles, and on triple-­A games like Eternal Darkness, Bully, Assassin’s Creed Brotherhood, and Far Cry 3. We are currently working on our first game as a studio, Children of .”

2. How did Cardboard Utopia come to be?

“Before I went indie, I had been working in games for a decade, the last four in triple-­A. I was no longer happy working for a corporation whose values didn’t line up with mine. After years of putting it off, I felt I was the right time and place to make the indie leap.The first year was spent putzing around, figuring out the game’s concept, and slowly recruiting the core team. After a year and a half of basement operations, the studio was named, incorporation papers were filed, and we have been fully active since.”

3. Where did the idea of Children of come from?

“Children of came from two places; my love of tactical RPGs, and the board game Arkham Horror. I had been craving a good tactical RPG for years, something like the ones I used to play during the 16 and 32 -bit era. Something turn­-based, light-hearted with good character development but wasn’t filled with an overly serious cast that would probably die if they cracked a smile. Something that had a traditional story but also broke away from the norm. I wanted to play that, but I wasn’t finding it in the games I was playing.

I was also really getting into board games and bought Arkham Horror based on several recommendations. I wrangled several friends together, and we played a few sessions. Unfortunately, none of us really liked it. But it was really too bad because I loved its game mechanics! I loved the excitement of drawing cards, choosing which items to buy, and rolling the dice to determine the outcomes of your actions.

That’s when I realized I wanted to take the feelings of tension, anticipation and surprise of this game and bring them into the realm of video games.That about sums up where Children of comes from, I wanted to play a weird retro-feeling tactical RPG/board game hybrid… so I gathered a stellar team and we started making one!”

4. Can you tell us more about Children of ?

“Children of is a singleplayer, story-driven tactical RPG, à la Final Fantasy Tactics, Shining Force, or Fire Emblem. But unlike those games, CoZ takes classic tactical gameplay and combines it with collectible cards and craftable dice. You play as , a thief from the slums of the city of Torus. She’s given the task to lead a small team to steal an ancient relic from a Toran nobleman’s vault.

What should’ve been a simple mission quickly turns into something far greater as the group is forced to flee the heart of the city while being pursued by city guards, rival gangs, and subterranean cannibals. and her motley crew of thieves will have to be resourceful to survive this vicious world.The question is, can they do it without sacrificing their own humanity?”

5. What are some of the highlighted features of Children of Zodiarcs?

“The most stand­out, “in your face” features are the card and dice systems. In CoZ all your attacks and spells are cast using cards. As your characters level up, they will unlock new cards which you can use to build custom decks for them to bring into battle. For each card you play, you will also roll a set of dice. We use symbol based dice, with each symbol affecting and enhancing the cards in different ways.

They can do things like increase your attack damage, trigger special effects on cards, give you extra cards, or even allow you to play an extra action. After each battle, you will collect loot dice that you can then equip on your characters. As an extra layer of customization, you can then go and craft the dice, changing the symbols on each side, so your your decks of cards.”

6. In what ways is Children of Zodiarcs different from other titles within the genre?

“The way the cards and dice mix with the tactical aspects of the gameplay is what makes Children of Zodiarcs really special. Generally, tactical RPGs are about execution, you see the next five actions you’re going to make, and then you execute them, only making slight adjustments along the way.

7. When do you hope to release Children of Zodiarcs and on what platforms?

“We’re currently looking a spring 2017 release date on PC. We already have a page up on Steam so people can add it to their wishlist and be notified when the game goes live. After that, we’ll be bringing the game to PlayStation 4 and Mac”

8. What's next for Cardboard Utopia?

“Right now, we have 2 possible paths, which one we go down hinges on what gamers think of Children of after it’s released. We already have a second project in place, ready for us to move on to after CoZ finishes.This second game is more action focused and very different from CoZ’s turn­-based gameplay. We already have the high ­level vision and narrative pretty fleshed out. It’s a pretty exciting project. However, if CoZ is a massive, supernova­-esque success, let’s say we already have a few ideas in mind for CoZ 2.”

“Jason (Creative Director): Final Fantasy Chronicles for PS1. Final Fantasy IV and Chrono Trigger all in one package, baby! I’ll spend my island days trying to kill Zeromus and then Lavos in every era. Of course, my nights will be spent dancing away my hunger pains.

Denis (Lead Programmer): World of Warcraft because it's already a game that made me wish I was in that situation so I could play all the time!

Sam (Game Director):­ Skyrim. I'm a hardcore fan of RPGs. Skyrim is roughly an RPG­ sim supporting neverending exploration in a high fantasy RPG setting.The game teases you to turn it into the game you want it to be, as opposed to playing it from start to finish.This extends the reach of the simulation for me, and modding the game compounds this and makes the experience less about playing the game's systems, and more about role­playing what I like in an RPG through this game.

Michael (Lead Artist): If we’re talking about a game I can play forever and ever and ever, I would go with Civilizations 3.There are potentially millions of scenarios I’d like to play out still. That, and I descend into a time bubble of endlessness when I do play.

Erica (Art Director):­ World of Warcraft because there are responsible adults playing that game who can help me if I go into General Chat and say “Help, I’m on an island in the Pacific oh god come save me!” If not WoW, then EVE Online. If I'm gonna be stuck on an island for the rest of my life, I might as well transcend the garbage human realm and realize my dream of being an interstellar merchant.

Camille (Programmer):­ Tony Hawk Pro Skater 2. I discovered lots of cool music and alternative skate culture with this game. I actually bought a board after. Also, because no one can beat me at this game. After Tony Hawk Pro Skater 2, EVE Online, because I want to become the master of the universe! Andrée (Operations and Community): I would go for a game that has near infinite replayability, like Minecraft or Starve. Also, their themes are relevant! I’m sure they could help spark some creativity for my own survival needs. I wonder if I could find enough spider webs to make myself a top hat.”

Be sure to check out Cardboard Utopia's official website for more details and information, and stay tuned for the release of Children of Zodiarcs!

For more interesting indie interviews here at Indie Obscura, be sure to check out our recent interview with Saran Walker from Offensive Magenta Games, our developer chat with Vile Monarch, and our previous Indie Spotlight about Gattai Games.