Hello Games has quietly delayed the game’s PC release by a few days. 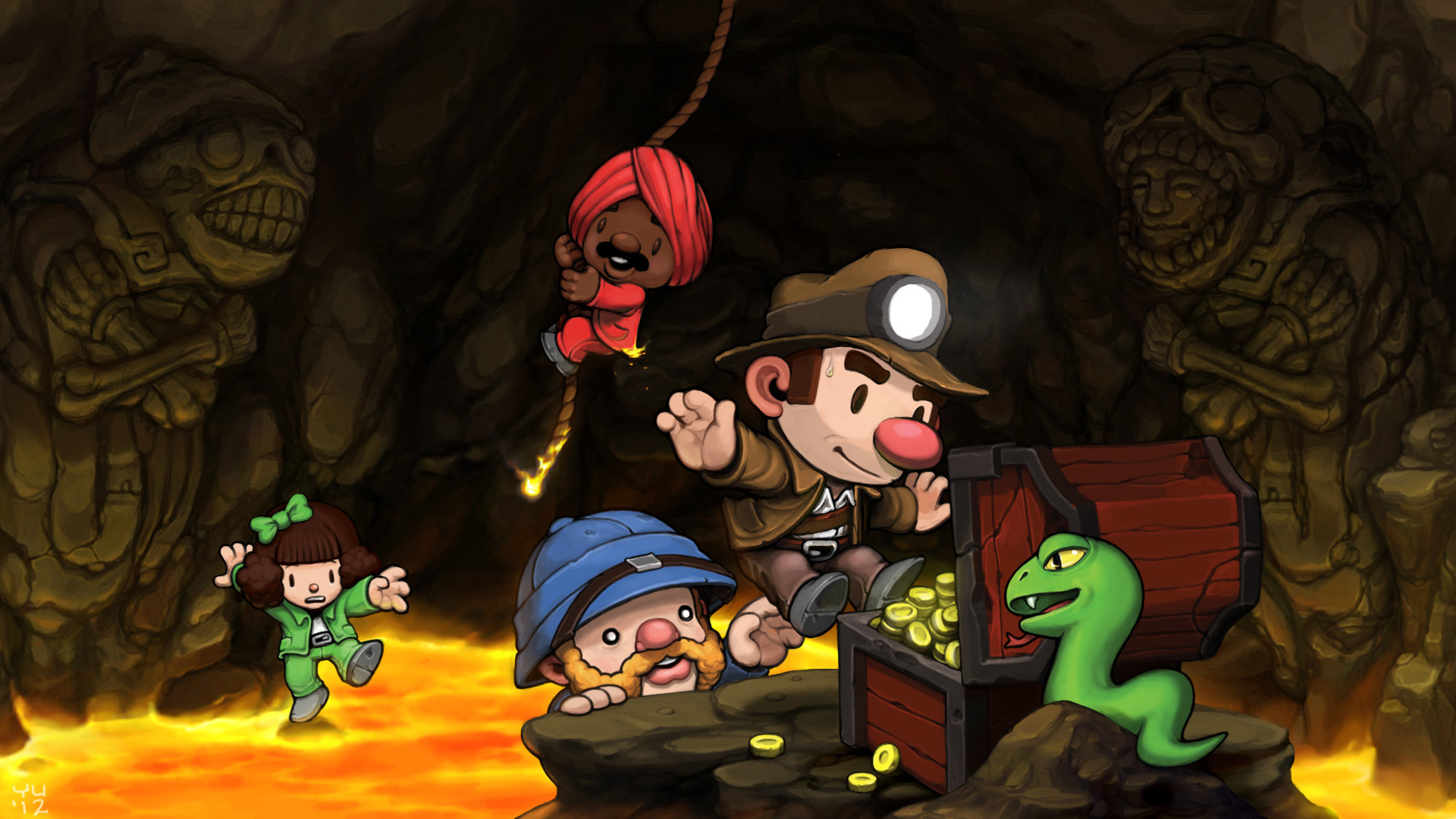 Sega and Nintendo battle it out by releasing mini versions of classic consoles.

Spelunky, by developer Mossmouth, is a roguelike platformer. Each progressive level in Spelunky is randomized, which makes it difficult to know what lurks around the corner. Death is permanent in Spelunky, reverting you back to the very beginning, which can be a somewhat frustrating method to learn the game’s mechanics. Below, we list life-saving Spelunky tips to help you get the hang of this game with as little hassle as possible.

In Spelunky, the name of the game is to progress your way downwards through each stage collecting goodies, all under a certain time limit. You have under 3 minutes to get yourself from the top of the map to the bottom, although this time extends if you’re able to evade the ghost that spawns after the 2 and a half-minute limit. Be extremely cautious when the ghost spawns, as his touch causes instant death. Speaking of death, one of the easiest ways to die in Spelunky is through the act of rushing to beat the time limit.

Sprinting through the level in order to gather as much as you can before walking through the exit can be tempting, but remember that a wide variety of traps and enemies are waiting for you in Spelunky. For example, if you’re unsure what waits for you over a ledge, press yourself against the ground to pan the camera downwards. If there’s a motion-detected arrow trap waiting, you can grab a nearby rock, clay pot, etc, and drop it over the ledge to trigger the trap, sparing you a painful arrow to the head.

To help you traverse the randomized levels of Spelunky, you’re given a few items that can be extremely handy in certain situations. Be sure to use your items sparingly, as finding/purchasing more can sometimes be a tricky endeavor.

Whip: To attack foes, you have a whip that snaps out and deals damage. Later on, you’ll have the opportunity to get your hands on some deadlier weaponry, but at the you’ll have to make due with the whip. The whip is most effective for forward assaults, and can also hit things flying above you (like bats). Be careful what you whip in Spelunky, as whips can set off explosive blocks, and if you whip the shopkeeper in the face he will be thrown into a rage, shooting his shotgun off in all directions!

Hearts: Your life is represented in hearts. You start with 4 hearts that equal 4 hit points each. Damage dealt in Spelunky will always do a minimum of 1 heart damage. There are a variety of ways in which you can replenish your hearts, including tracking down a Damsel. You will hear Damsels crying out for help when you get close enough to their location. Keep in mind that picking up a Damsel will prevent you from picking up other items, and performing actions like using your whip until you set the Damsel down. Damsels are only useful to you alive, so be sure to keep them out of harm’s way before depositing them in the exit door. Damsels replenish 1 heart.

Rope: You are given a total of four ropes to start with. Additional ropes are located within crates and in the shop. Ropes are useful for getting yourself out of tricky situations, reaching things that are located above/below you, and for minimizing fall damage. Activating a rope will shoot it directly above your head. You can send out a rope mid-air while jumping, which can extend the length of the rope. Keep in mind that ropes can activate arrow traps, with bouncing/falling arrows capable of dealing damage.

Ropes can be a useful tactic for collecting certain goodies, like the Golden Idol (think Indiana Jones). When you pick up this object, a giant boulder will roll from the left to the right, crushing you if you’re in the way. A good way to avoid this is to deploy a rope above you, grab the Golden Idol, then quickly shimmy up the rope and let the boulder pass by underneath you.

Bombs: You are given a total of four bombs to start. Additional bombs are located within crates and in the shop. Bombs can kill you, so when you set down a bomb, be sure to scurry away before it detonates. You can use bombs to destroy walls, create shortcuts, and even kill enemies like the giant black spiders. When working through walls, get the most bang for your buck by placing bombs on seams in-between the dirt clods. Note that bombs won’t penetrate harder surfaces (like moveable cement blocks) as efficiently as simple dirt surfaces. So make sure to always use your bombs sparingly!

There are a few different items you can pick up along the way, each with their own usefulness.

Crates: Whipping a crate will reveal its contents. Inside the crate are typically additional ropes and bombs, but you will occasionally find more valuable items including Paste, and Parachutes that prevent you from taking fall damage (will activate only once) if you plummet from a high ledge.

Rocks: You will find these lying around. Rocks are great for throwing at enemies and for disarming arrow traps. Careful when tossing a rock, as it can bounce back and hit you for damage.

Pots: These will either contain jewels, absolutely nothing, or deadly enemies. The best method of breaking open pots is to toss them away from you in case an enemy lurks within. In addition, you can use pots in the same manner as rocks by dropping them to the next level below to set off any arrow traps waiting for you.

Chests: These contain random treasure, jewels, etc. Every now and then, an active bomb will be hidden inside a chest. Be sure to get to a safe range before the bomb detonates. An empty chest can be carried and used like the rock or the pot to deactivate traps.

Damsels: In addition to replenishing 1 heart if you can get them through the exit door alive, Damsels also have other uses. If you’re carrying a Damsel and activate an arrow trap, the Damsel will take the damage instead of you. They can also be thrown to kill enemies like spiders. Be careful with how much damage you allow your Damsel to take, as death renders them useless when seeking to add another heart. Also, they tend to wander off when you set them down, so keep a watchful eye on them!

Shops can spawn any level and will offer either helpful items or paid services like the Kissing Booth, which can help replenish health for a high cost. Stealing from the shopkeep is not advised, as he’ll lose his mind and chase after you with a shotgun in the same manner as if you’d whipped him in the face. The best tactic is to buy your item, which he will transform into a nice looking present, carry that present outside the shop, and then whip to open it to avoid any… misunderstandings.

Below are a few items you can purchase from the shopkeeper in Spelunky.

You'll bump into quite a few in the beginning, the list gradually increasing as you move through Spelunky's stages. Below are the first enemies you'll encounter.

Use your items sparingly in Spelunky, and be sure to prioritize caution over rushing through each stage. Think strategically, like throwing a bomb into a giant black spider’s web, or using the rope to shimmy out of harm’s way when picking up a Golden Idol. After that, it’s simply a matter of getting yourself from the top of each map to the bottom, taking as little damage as possible!

For more helpful indie game guides, be sure to check out our Don't Starve Beginner's Guide to help you survive longer. Fan of Viscera Cleanup Detail? We have a tutorial on how to earn the Clean Freak achievement in Viscera Cleanup Detail! Not sure which class to play in Chivalry Medieval Warfare? Read through our guide to the best class setups in Chivalry Medieval Warfare.