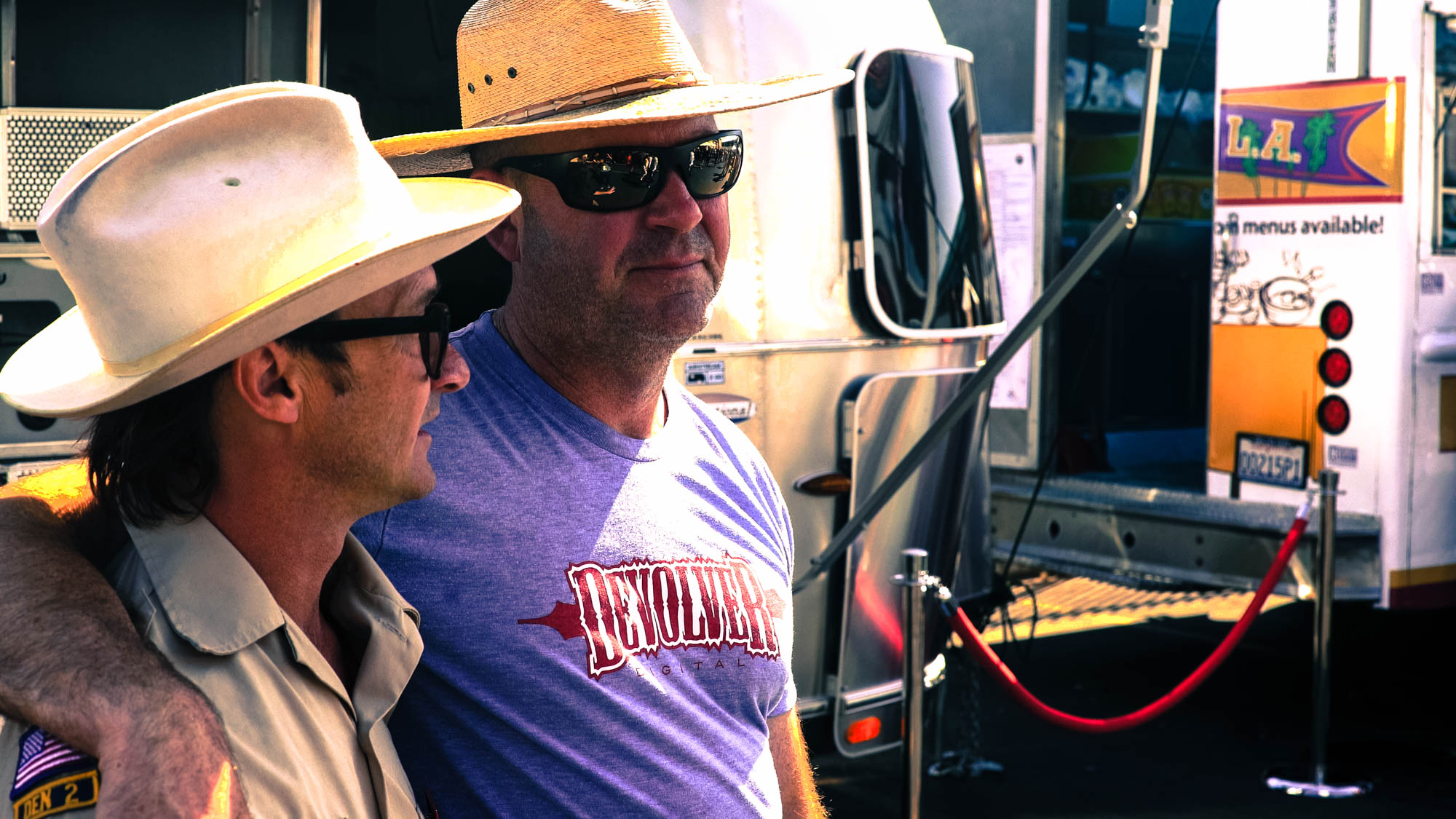 Gambitious started as an answer to the current trend of crowdfunded or "kick-started" games that more often than not never see their true potential realized. Using their years of industry know-how, Gambitious wanted to create a platform that allowed video game developers a clear path towards realizing their dreams, while also handling the stuff that inexperienced groups would have trouble with. We managed to pull Mike Wilson and Harry Miller away from the busy foray as hosts of other venture, Devolver Digital, to learn more about their philosophy, motivations — as well as for some good old-fashioned fun!

To give you some additional background on these two, they throw a party across the street from E3 every year as a counter movement to the big, expensive spectacle of E3 (one of video gaming's largest industry trade shows). Anyone from E3 with a badge is invited to attend, and when asked why Devolver set up shop in a parking lot across the street, and not in the LA Convention center where E3 was held, Mike gave us a rather coy response.

Mike instantly struck me as a guy who genuinely likes to go his own way. I tend to avoid making judgments on appearances (Mike is donning a Boy Scout uniform complete with the hat), but everything I know and see from this team reinforces that sentiment over and over again, and it definitely works. Gambitious decided they wanted to create a system that allows aspiring developers to create their games without being influenced by publisher motivations, or investor pressure. Since their inception, they have successfully funded and published several games, with four of the first six paying out profit within a month of release.

"We like to do things our way. We like to enjoy ourselves, not to forget that gaming is about fun, and this is fun for us."

When I asked Harry the same question, he responded in tune. "It's a story that goes way back," most likely referencing his time as a founding member of GOD or Gathering of Developers. "Of course one of the answers is financing, right? The cost is so exorbitant in there. We think it's stacked against most people... and really, only the big boys can play." He went on to talk about his own team, "we like to do things our way. We like to enjoy ourselves, not to forget that gaming is about fun, and this is fun for us."

I then went on to ask Mike, "Why are independent games important to you?" Up until this point, we had been joking and having a laugh, but his tone changed, as if to imply that he didn't take this subject lightly at all.

"Because I love the people that make them. I find it a really refreshingly and nearly ego-free artform, and I love artists. A lot of people go their whole lives without getting that thing out of them that wants to come out."

A big portion of what has made the Gambitious model work is just that. They aim to be as hands-off (or on if requested) as possible with the teams actually making the games. We recently chatted with Crush Your Enemies creators Vile Monarch, and when asked about working with Gambitious as a publisher they told us, "we don't have to be afraid about the intricacies of crowdfunding. The best thing is how they gave us all the freedom when making the game. We just make the game, and it's our game."

You can watch the video version of the interview below.