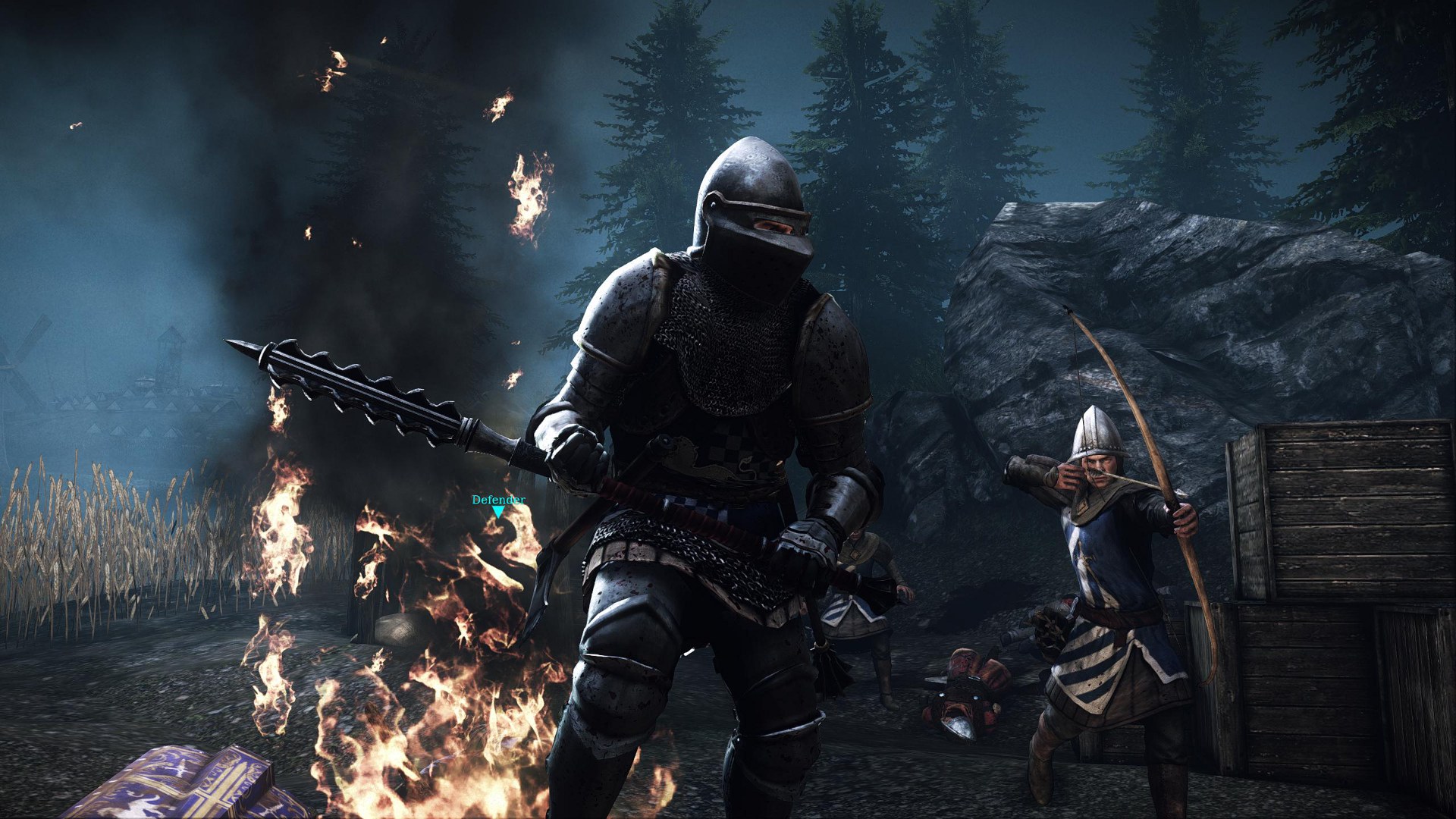 Developers of Quantum Break, May Payne, and Alan Wake are hard at work on two upcoming titles.

Chivalry Medieval Warfare is a hack-and-slash game that offers plenty of gruesome weapons to choose from. Whether you’re defending peasants in Team Objective, earning kills for your team in Team Deathmatch, or running around chopping heads in Free-For-All, the following class setups are some of the best for bloodying your opponents. While everyone will have their own unique play styles and personal preferences, the following setups have been selected based ease of use, effectiveness, and overall damage output.

Starting things off we have the Knight, one of the best classes for beginners to use thanks to its tank-like nature and slower movement speed. In addition, the Knight has access to some of the most brutal weapons in the game. While the Knight’s slow speed may seem like a disadvantage, it more than makes up for it with its beefy health and arsenal of weapons.

Beginners will have access to one of the following four weapons: Double Axe, War Hammer, Longsword, and Flail. To unlock the rest of the weapons you must score kills with each. The best of the four to use is the traditional Longsword as it offers the most range, alongside adequate damage output. As you score kills with the Longsword you’ll eventually unlock two other viable weapons: the Sword of War (quick sword with moderate damage output), and the Messer (a slow sword that doles out massive amounts of damage).

Beginners will have access to either the Mace or the Broadsword. Because you will already have the Longsword equipped, the Mace is the better of the two options. This is because it deals blunt force damage that is highly effective against other Knights. If you aren’t dealing adequate damage with your Longsword (or an opposing Knight has a similar blunt weapon equipped), simply swap out your Longsword for the Mace and bash them over the head. In addition, the Mace has the ability to obliterate your opponent’s skull.

The Knight has the option to equip a Shield or Throwing Axes. For beginners, the Shield can provide extra protection, but is not recommended for the Knight because it’s slower than parrying an attack with your primary/secondary weapon. The better option here are the Throwing Axes. If your opponent decides to flee a skirmish and you don’t feel like chasing after them, Throwing Axes offer an opportunity to peg them in the back.

Somewhat similar to the Knight, the Vanguard is the speedier of the two with a class-specific ability to lunge at opponents. To Lunge, simply run through the map until you see the Vanguard hoist his weapon up in preparation, then pick an unwary opponent and Lunge by pressing the left mouse button. To complement the Vanguard’s special ability, you will need to choose the appropriate weaponry.

Beginners will have access to one of the following four weapons: Greatsword, Spear, Bardiche, and Pole Hammer. To unlock the rest of the weapons, you must score kills with each. Among the four, you can choose either the Greatsword or the Bardiche depending on personal preference.

While the Bardiche is the better option of the four starter weapons, scoring kills with the Greatsword will eventually unlock two major Vanguard weapons: the Claymore (a brutally fast sword that can be difficult for opponents to parry), and the infamous Zweihander (one of the longest swords in the game with immense damage output).

Beginners will have access to either the Shortsword or the War Axe. While both are equally viable, the better option here is the War Axe. This is because the Vanguard doesn’t have access to a wide variety of primary weapons that deal blunt force damage, so you will want to select a secondary weapon that makes up for this. The War Axe is great for bashing in the skulls of enemy Knights and is speedy enough to handle both the Man At Arms and the Archer.

One of the faster classes in Chivalry, the Man At Arms also has the special ability to dodge incoming attacks. Using the Dodge ability, the Man At Arms can avoid deadly swings, or disorient an opponent long enough to get in a well-timed swing or two. To Dodge in a specific direction, simply double tap the movement key of the direction you want to Dodge. You can Dodge forwards, backwards, left, and right.

Beginners will have access to one of the following four weapons: Broadsword, Hatchet, Mace, and Quarterstaff. To unlock the rest of the weapons you must score kills with each. Unfortunately, the Man At Arms lacks access to ranged weaponry, which means you will have to choose your weapon of choice carefully as you will need to get quite close to your opponent.

While all four are equally viable, the two on the top of the recommendation list would be the Quarterstaff (great for dealing blunt force damage, and frequently underestimated by opponents which it tricky to parry), and the Mace (decent damage output, and unlocks two other viable Man At Arms weapons).

Universally hated, the Oil Pot is a deadly throwable that lights opponents on fire within the Oil Pot’s damage radius. Capable of killing enemies with low health, as well as bringing your opponent’s health down in order to take them out quickly, the Oil Pot is definitely one of the best in Chivalry, despite the you will receive while using it.

The Archer is Chivalry’s only ranged class. The Archer is a tricky class to play and has several pros and cons to consider. Quicker than the Man At Arms, longer range, and an impressive variety of weapons, the Archer can be a fun class for players who enjoy sniping opponents from afar. However, the Archer has the lowest health of all four classes (can be instantly killed by the Vanguard’s Zweihander). In addition, it’s also the most hated class in the game, with special voice prompts to “Kill those archers!”

Beginners will have access to one of the following four weapons: Longbow, Crossbow, Javelin, and Sling. To unlock the rest of the weapons you must use score kills with each. Of the four weapons, the only one that isn’t recommended is the Sling. While it’s the perfect weapon to annoy opponents with, it doesn’t deal enough damage to be viable.

The Longbow is great all-around because it deals moderate damage and has fast . The Crossbow deals the most damage of the but has a punishingly slow reload speed that leaves you vulnerable to enemy attacks. The Javelin is the perfect middle-of- weapon, but doesn’t offer as much range as the Longbow or Crossbow.

Beginners will have access to either the Broad Dagger or the Shortsword. The Broad Dagger is a great and is particularly deadly in the hands of an Archer due to the fact that the Archer has more speed than the Man At Arms. However, because the Archer lacks access to blunt force weapons, using the Shortsword can be equally viable, as you will eventually unlock the Cudgel. While the Cudgel may not be the best blunt force weapon in the game, as an Archer it’s your best secondary weapon pick to use against Knights.

The Archer has the option to equip a Shield, Extra Ammo, Bodkin Arrow, Broadhead Arrow, Pebble, or Lead Ball. Beginners will definitely want to equip a Shield, as their low health makes them extremely vulnerable. However, once you get comfortable with timing your blocks, you can experiment with the other available.

Extra Ammo is great when using the Javelin, although it’s not as necessary with the Longbow and Crossbow. Both the Pebble and the Lead Ball are throwables that work along the same lines as the Sling. Not really recommendable, as they simply won’t bring an opponent down quick enough. The Bodkin Arrow and Broadhead Arrow will both increase your damage output, and depend on personal preference. Experiment with both to see which one best fits your play style.

That’s it! By keeping these class setups in mind, you will be on your way to becoming a Chivalry Medieval Warfare master in no time.