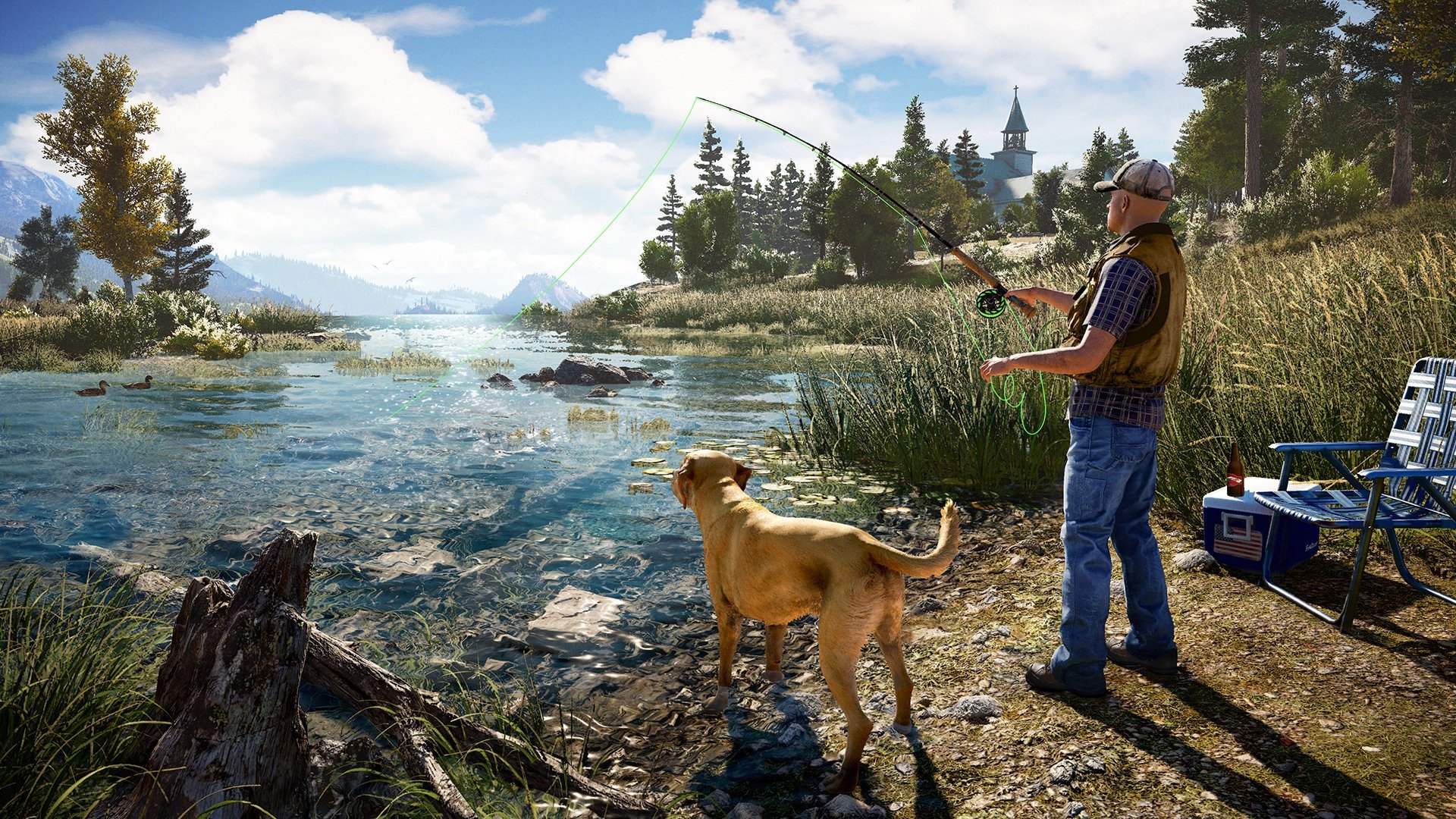 So there we are, creeping through the undergrowth on the side of a hill, shafts of sunlight piercing the dense canopy overhead, when we catch sight of our prize: the telltale white and brown furry hide of a North American pronghorn. We need to bring down and skin two of these fast-moving critters to complete our current mission, and we've been crawling around for the last 10 minutes patiently looking for the second one.

All of a sudden, a wolverine appears out of nowhere and jumps right at us. Fumbling for our melee weapon to avoid spooking the distant pronghorn, we swipe at this new adversary and send it skittering lifeless across some nearby rocks. At which point the game decides we've fulfilled some unseen quota for whacking hallucinogenic animals, and literally kidnaps us to go and do a story mission. We never see the pronghorn again.

Far Cry 5 isn't exactly heaving with open-world innovation, but one of its standout new additions is this weird habit of abducting the player at intervals to go deal with one of the bad guys on the game's critical path. You might be fishing in a lake, minding your own business, when out of nowhere a party of Eden's Gate enemies rolls up and knocks you out with a "bliss" dart, and then you wake up in a van at the start of a shoot-'em-up mission where you have to liberate the cult's other captives.

If any other open-world developers are reading, here's a tip: please don't do this. Let us choose when to engage with the story. Then again, we can understand why Ubisoft might have chosen to throw in this feature, because everything else in the game is so much fun that the overarching tale about liberating Hope County from a religious cult ends up feeling like a distraction rather than the thing driving you forward.

For anyone in search of a game with something to say, this should be an instant turn-off. Frankly we're not surprised Far Cry 5 has been given a shoeing by a few critics, some of whom felt its provocative choice of setting and its quasi-nationalist religious nutball antagonist demanded a bit more storytelling bravery, especially given the presumably deliberate parallels with the current political climate in the USA. Others simply felt that the tonal dissonance between the fairly serious narrative and the ridiculous antics you get up to outside of it meant it all felt a bit random and gratuitous.

Neither is a bad take, but we still can't stop playing Far Cry 5. Random and gratuitous, it turns out, is our jam.

Part of the disappointment with Far Cry 5's narrative stems from the fact it starts pretty brilliantly. You're a rookie US Marshal flying into Hope County, Montana, as part of a group trying to arrest a local religious leader, Joseph Seed, who has stoked up tensions among the local populace to the extent that it could all boil over at any minute. The local sheriff begs your boss to call off the raid, but you go through with it, landing outside Seed's church, where his heavily armed followers patrol a chain-link perimeter. You can feel the violence simmering under the surface, but you press on into the church.

We won't spoil the next bit, but half an hour later you're waking up in a bunker somewhere deep in the countryside, where a resistance leader, Dutch, has squirrelled you away from the wreckage of the botched raid on Seed's church. Dutch gives you a weapon and sends you out into Hope County to help build up the resistance against the Eden's Gate cult, which has used your attempted arrest as a catalyst to throw off any semblance of lawfulness and take control of the region, forcing residents to surrender property and themselves and go through hideous indoctrination routines to become part of the cult.

Heavy stuff. You need to complete missions to build up the resistance's strength and weaken the cult's stranglehold, liberating several large regions, each under the control of a Seed lieutenant. The standard open-world template starts to emerge in front of you, and while the story missions slump into a predictable pattern of big shootouts bookended by lengthy monologues from the various Seed family members, the rest of the game quickly steps up.