They're sure to get your heart racing. 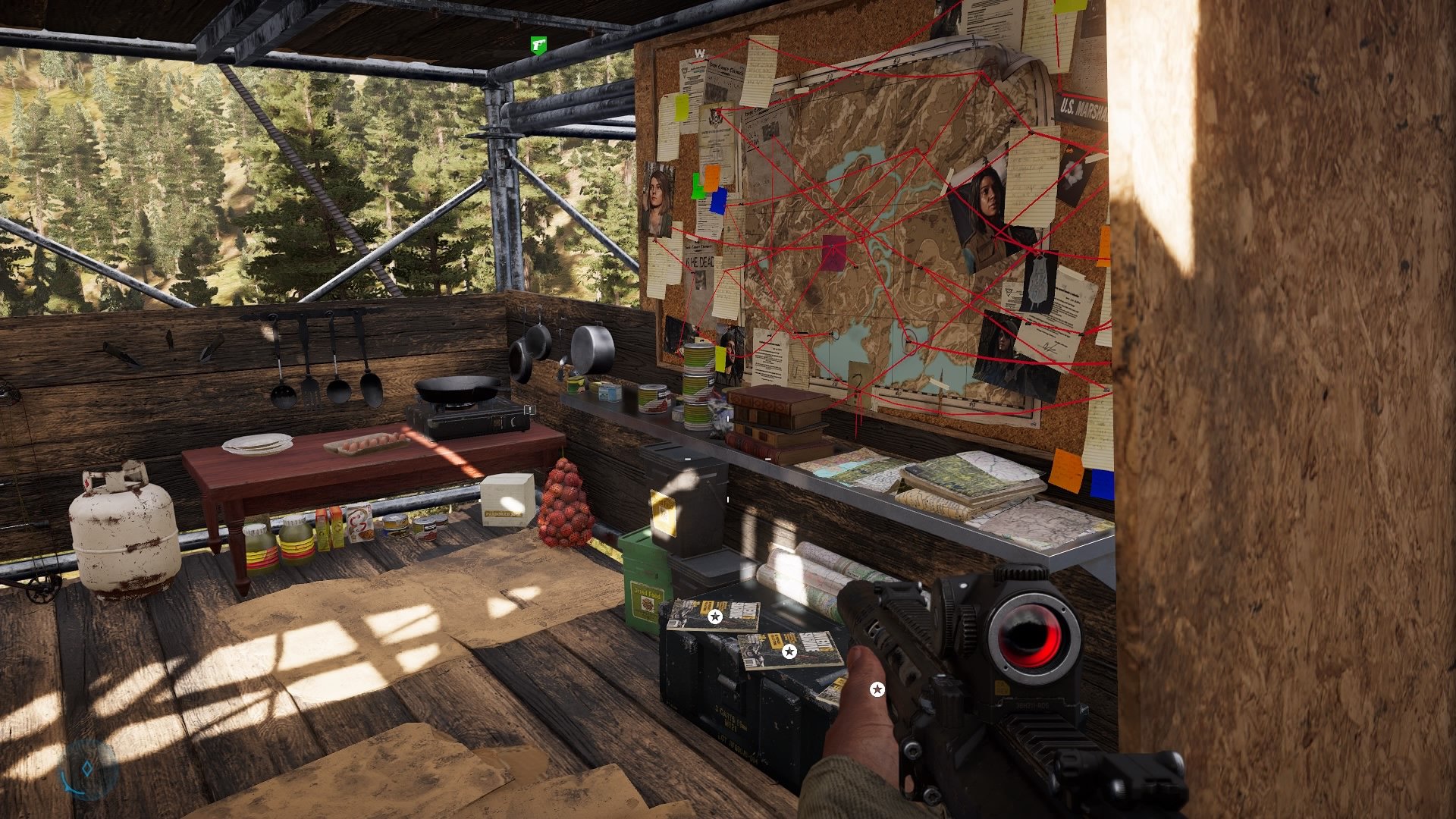 Far Cry 5 is brimming with collectibles and hidden spots to find, but few are as satisfying as the Prepper Stashes you’ll find strewn across Hope County. Each provides you with a choice bit of loot, but there’s also a tangible sense of satisfaction each time you uncover one. There are a huge number out in the world, but we’ll help you track down and break into every Prepper Stash for Dutch’s Island, John’s Region, Faith’s Region and Jacob's Region. In this guide we’re covering Faith’s Region, so get out there and collect those goods!

You’ll find the Pooper Scooper Prepper Stash at the Silver Lake Summer Camp. Once you’ve read the note to start the quest, head round the back of the main building and smash your way in through the wooden boards. Once you’re in, look at the floor and pick up every poop you can find. As you might suspect, we found the Summer Camp Key Card in the final pile. When you find it, simply go back outside and use the keycard to open the cabin doors. One of the cabins is the stash you’re looking for. Inside are three perk magazines, cash, and a few weapons.

You’ll find the note to start this quest just outside the Howling Cave. Read it, then head into the cave. You’ll have to take out some enemies and grumpy wolves, but beyond that it’s pretty straightforward. You need to use your Grappling Hook to reach the level with the helicopter, where you’ll find cash and three perk magazines sitting on a wooden pallet.

This is one of the easier stashes to acquire, but you might need to keep any eye out for angry bears. Read the note at Taft Lookout Tower to start the quest. then head up the mountain to Raptor Peak. You’ll find cash, three perk magazines, and at least one backpack. If you’re not fussed about reading the note to start the quest then simply head directly to Raptor Peak. We’re not gonna stop you.

Arriving at the Horned Serpent Cave, read the note just outside the barred gate. From here you’ll need to Grapple up the cliff before walking toward the waypoint at the cave. Jump down as far as you can go, then use your grapple for the rest of the journey. You’ll need to alternate between jumping, grappling and using your zip line to make it through the cave, taking out a few enemies along the way. The stash here has three perk magazines, cash, a backpack, and some crafting supplies. Once you make it to the stash the gate will be mysteriously open, making your route out a lot simpler.

This is another fairly simple stash to secure. Look through the main bit of the garage for the note, then head out and round the back to break through the wooden barricade and into the building. Hit the button on the far all and you’re open the main garage door. Exit the building and enter through the door you opened. Move through to the washroom and you’ll find McCallough’s Key Card. This will open the locked door to the Prepper Stash. Along with the usual cash and three perk magazines, this stash also unlocks the 1973 Pygmalion SSR for your garage.

Outside the Bright Warden Radon Spa you’ll find a note outside that gives you the Side Effects quest. Enter the mine and make your way to the back, smashing and wooden barricades in your way until you reach the final room. You’re not there until you can’t move forward any further. Flip the switch here to turn on the power. You’ll now need to backtrack through the cave, killing any angels as you go (remember: headshots are the key here). The prepper stash will now be open, offering three perk magazines, cash, and grenades.

Time for the spookiest of stashes! Nab the note from beside the Prepper Stash Door to kick things off, then climb up the scaffolding beside the house. Enter and you’ll be able to turn on the power to open the stash door. If you don’t like jump scares, this’d be a good time to look away, as you’ll basically be walking through a short sequence full of them. Make it to the end of the house and you’ll find the standard cash, three perk magazines, and a few other valuables.

The note for this Prepper Stash is just outside the Dead Man’s Mill. Read it, head under the cabin and inside. Grab the Waterfall Wheel and use it outside to stop the waterfall. Just below the Waterfall Wheel you can find a grapple point. Drop down with your Grappling Hook and swing into the cave. Loot the prepper stash for the cash, three perk magazines, and anything else. Simples!