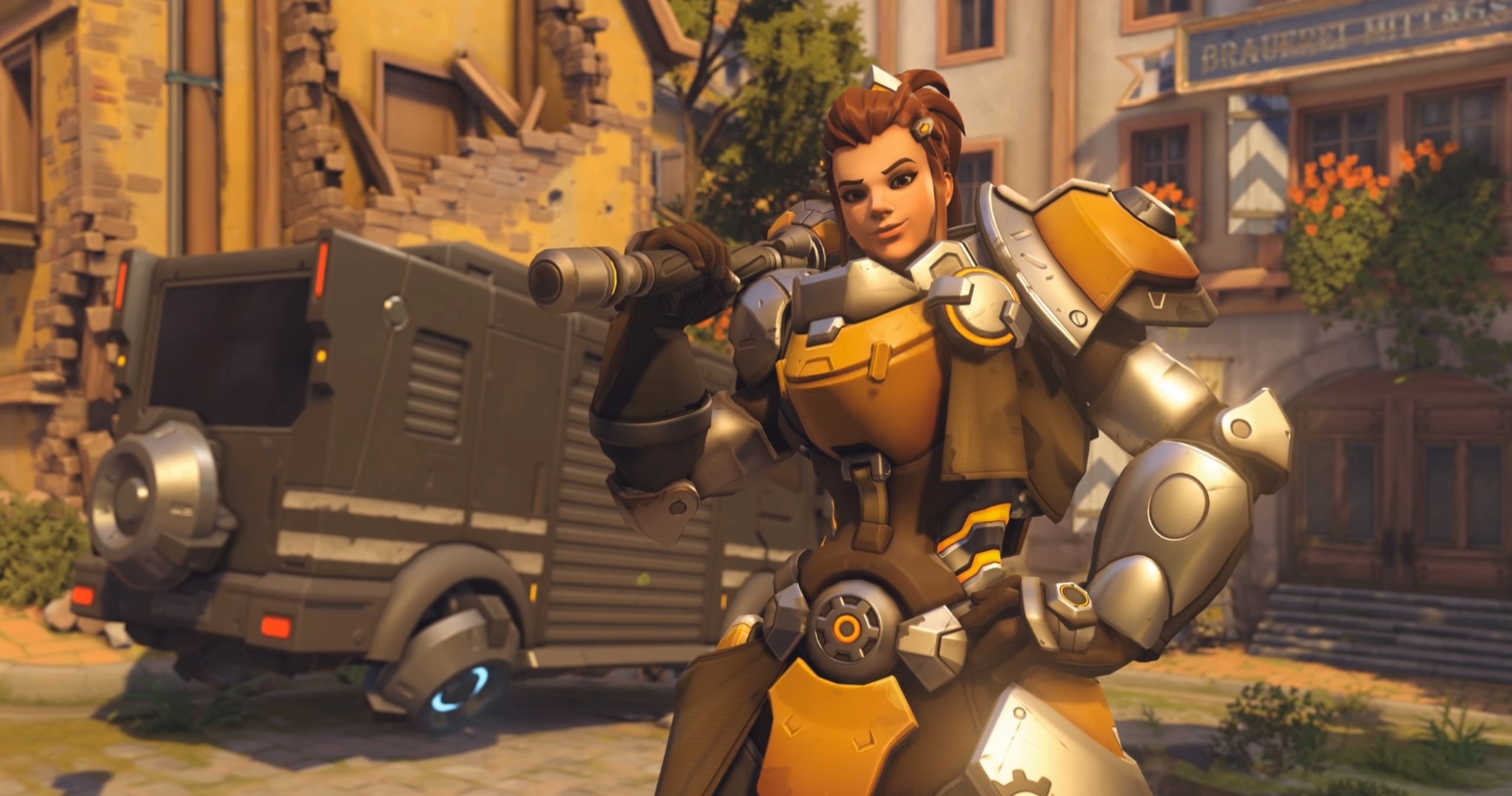 How to play as Brigitte in Overwatch

Brigitte is the latest hero join Overwatch’s colorful cast of characters and she’s an excellent addition to the roster. Her strengths lie in her Rocket Flail, which gives great offensive potential and allows her to constantly heal nearby allies with Inspire, while her Repair Pack and Barrier Shield greatly enhance her ability to protect friendly units and dictate the flow of battle. Brigitte’s kit may share similarities to both Torbjörn (father) and Reinhardt (squire), but she shakes up both and turns them into a wholly unique tank/support experience that’s an absolute joy to play. For those looking to create some death-defying plays, Brigitte is a great pick.

Brigitte's primary attack is with her Rocket Flail, a melee weapon that does damage in a circular area in front of her. The flail has a maximum range of six metres and does 35 attack per hit, meaning it will take six hits to kill a 200 HP hero. Brigitte can whittle down most targets, especially squishy damage dealers who happen to get caught flanking. Make sure you maintain an offensive playstyle to proc the healing from your passive and make yourself and those around you unkillable.

When activated, Brigitte hurls out a Repair Pack that can heal an ally, however, any healing over an ally’s maximum health provides them with armour instead. The repair pack dishes out top up of 150 health and up to 75 armour over max health. Having a 30 metre radius and five second bonus armour duration makes this handy little pack extremely useful, especially when healing those that are just out of reach of Inspire's passive healing range.

Whip Shot allows Brigitte to throw her flail a long distance in front of her, dealing damage and knocking an enemy away. This ability has a maximum range of 20 metres and is great at pushing an unsuspecting foe off the map, sniping low-health targets or peeling off particularly aggressive players from your backline.

This nifty shield not only allows you to protect yourself from incoming damage, it also gives you a dash that stun enemies. Brigitte’s shield only has 600 health and while it’s not as useful as Reinhardt’s, it still gives her great opportunities to prevent lethal shots and lock down high priority targets with Shield Bash. This move is also very useful for traversing short distances and avoiding various ultimate abilities.

Brigitte’s passive allows herself and her teammates to stay healthy when barraging enemy heroes with her Rocket Flail. This gives the mechanical engineer plenty of opportunities to get right into the thick of battle without the fear of instantly falling to those around her. However, the healing from Inspire is only active when Brigitte is attacking, so she must maintain her offence to unleash the passive’s full potential.

Rally grants Brigitte increased movement speed and provides all nearby allies with armour that lasts until it’s removed by damage. If properly executed, this ultimate can be utterly game-changing. Being able to counter highly-aggressive plays or help make a final objective push gives Brigitte’s team excellent opportunities to steal an all-important victory.

Brigitte is a hero who requires great awareness and synergy to be effective on the battlefield. Her blend of tank and supportive abilities give her plenty of opportunities to disrupt enemy tactics and make her extremely useful in teamfights and smaller skirmishes. She has great tempo control and anti-dive measures with her Rally ability and her playstyle just oozes potential.

When playing Brigitte your primary goal is to barrage nearby foes with your Rocket Flail. Constantly smacking enemy heroes with your mechanised whip will allow your team to capitalise off the healing from Inspire and greatly increase your team’s survivability. If you see a healer or squishy damage dealer out of position, then don’t be afraid to use your Shield Bash to dash in and stun them. Once they’re stunned keep wailing away with your Rocket Flail to keep yourself healthy, while also dishing out sustained damage. This combo will usually give your team enough time to quickly pickoff your chosen target before they can even retreat.

However, make sure you communicate with your team before rushing into the fray, as you could find yourself being left high and dry without the aid of your teammates. If you get into trouble, simply put up your shield and counter as much damage as possible. Just be sure to throw out a few hits every now and then to regain some of your missing health, but be aware of enemy Pharah and Junkrat players as their AoE splash damage can easily creep under your shield. Once Shield Bash is off cooldown either reengage or make a mad dash back to the safety of your teammates. It’s often best to retreat rather than gifting your enemy a kill, so don’t be afraid to use Shield Bash to escape.

Brigitte doesn’t just have to get up close to deal damage as her Whip Shot provides her with decent amounts of ranged damage. Use this ability to stop unwanted dives and keep any healers/squishy damage dealers out of harm’s way. If you happen to see a low health enemy slinking off into the distance, try and use your Whip Shot to deliver the killing blow. The shot can be a little tricky to land, but if you’re used to landing Roadhog’s hook, then you should be sniping and punting people off the map in no time.

It’s easy to forget that you’re playing a supportive role when using Brigitte, but make sure you are constantly throwing out Repair Pack’s whenever they’re available. This won’t only save a teammate from an early demise, it will also give tanky heroes like Reinhardt or Winston an extra boost in defence before they launch themselves into the midst of battle. Once your primary tanks have engaged don’t be scared to follow-up with your own attacks as this will keep them ticking over while your damage dealers are able to safely deliver deadly blasts. If you feel the battle is swinging in the enemy team’s favour, then use Rally to give your allies the extra oomph they need to turn the tide.

Brigitte’s ultimate can be used both offensively and defensively. For example, if an enemy Zarya has popped her Graviton Surge you could Rally to help negate any incoming damage and save multiple lives. Meanwhile, Rally also has great synergy with heroes like Zenyatta, Lucio and Doomfist and her kit counters the current dive comps that are rife in normal and competitive ranks of play. Brigitte is absolutely brimming with potential and she’s easily one of the most fun support heroes Blizzard has introduced to date, so if you like the idea healing and shielding your teammates while ferociously bludgeoning your opponents, then Brigitte is the hero you’re looking for.