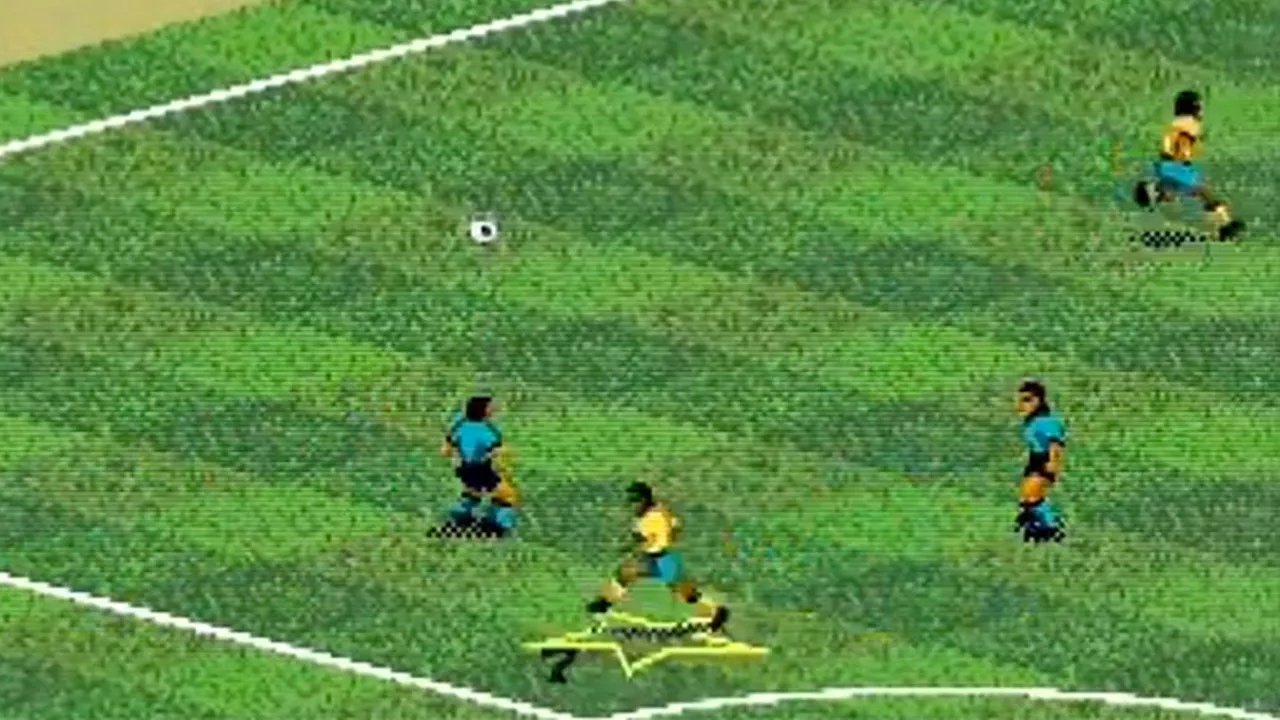 FIFA 18 is due out around the world this week, eagerly anticipated by over 10 million soccer fans who buy it religiously, many of whom then pour even more of their money into the game through microtransactions that fund their FIFA Ultimate Team habits. The game costs hundreds of millions of dollars to develop each year at EA Sports Canada, an imposing campus nestled in the hills above Vancouver like the volcano base of a Bond villain. It's strange to think that all this grew from a game that EA's upper management didn't even want to make in the first place. It's even weirder to play it now and realise it's still a lot of fun.

These days we think of FIFA battling with Pro Evolution Soccer, but when FIFA International Soccer was released in 1993, its main competition was games like Sensible Soccer and Kick Off, top-down abstractions of the sport that relied on the player's imagination to fill in some whopping gaps. In-game players in these rival titles essentially didn't have bodies - they were little pixelated heads and shoulders viewed from above, or appeared as strange one-legged sprites when slide tackling - so the isometric viewpoint pioneered by EA Sports in its first FIFA title was to prove revolutionary. For the first time, you could actually see the players' bodies and watch them run, kick, head and tackle.

Revisiting the game now, it's easy to spot weird issues, like defenders sometimes standing on the goal line for no particular reason as long-distance shots head towards them, but these wrinkles are easy to ignore, because the core game of gathering the ball, moving it upfield with a mixture of long balls, passes, chips and one-twos still feels very good. The way players actually knock the ball forward as they run with it, rather than having it glued to their feet, really adds to the feeling of watching soccer, and the isometric perspective means that shots flying into the top corner look great. There's something uniquely thrilling about standing along the trajectory of a goalbound shot and seeing it zoom into the net, and FIFA was the first game to give you that. (Providing you shot toward the top-left of the goal, of course.)

For a relatively simple take on soccer, EA packed in some pretty detailed controls, too. Without the ball, you can hold a button to run faster to catch an opponent, another button lets you slide-tackle, while another shoulder-charges and even throws an elbow in some circumstances. (Referees turn a blind eye, however, presumably because EA didn't have the time to implement them.) When you have the ball at your feet, you can unleash passes long and short, lob or chip the ball, play a give-and-go with a team-mate, and even execute a cheeky backheel. Of course you can also unleash a shot in the direction of the goal, using the shoulder buttons to add aftertouch to tweak the trajectory. What's more, every type of pass or shot can be played at a velocity of your choosing thanks to a power meter.

Back of the net

Despite the familiar FIFA logo and a photograph of England's David Platt on the cover, EA's reputation for piling up official licences was won in the years after International Soccer. In this original installment, players can choose between 48 national sides, but the players are all fictional. One, Brazil striker Janco Tiano, does bear resemblance to a real-life figure, but it's not soccer player - it's EA programmer Jan Tian, who worked so hard on the game in the early 90s that at one point he was hospitalized from exhaustion.

Naturally Tiano is a dead-eyed goal machine in FIFA, although to be fair it's hard to feel much difference between the capabilities of individual players. It's certainly a far cry from these days of regular players, in-form versions and Icons, but back in 1993 it was a big enough achievement just getting the players to move around in something resembling a soccer formation, so we can cut Tian and his colleagues some retrospective slack.

One of the things they probably should have noticed at the time was the ability to block goalkeepers drop-kicking the ball. Easier to avoid in multiplayer, it does make single-player tournament matches rather simpler to win. Essentially, whenever the opposing goalkeeper collects the ball, you just take control of a nearby striker and position him a couple of paces in front of the goalkeeper as he prepares to kick the ball. Judge it correctly and the keeper will kick the ball straight into you, allowing you to control it and then move to one side and blast it into the net. It doesn't always work or result in a goal - the goalkeepers oscillate between hapless and superhuman, so a six-yard half-open goal is no guarantee you'll hit the net - but it's reliable enough to fall back on if you struggle. It certainly puts modern complaints about things like "near post shots OP" into perspective.

Of course, these days the goalie issue feels like more of a cute mistake than a real problem, and if you're playing with friends then you can always make a polite agreement not to use the exploit. We'd certainly recommend playing it again with friends. If you have an old console handy, FIFA International Soccer is pretty cheap on auction sites these days, and if you're looking for an alternative to complicated modern takes on the sport, you could do worse than return to this simpler time and embrace the nostalgia. It still feels crazy that FIFA has become such a behemoth, but these were hardly rude beginnings, and you hope that some of the series' original brain trust has been able to share in its good fortune since.