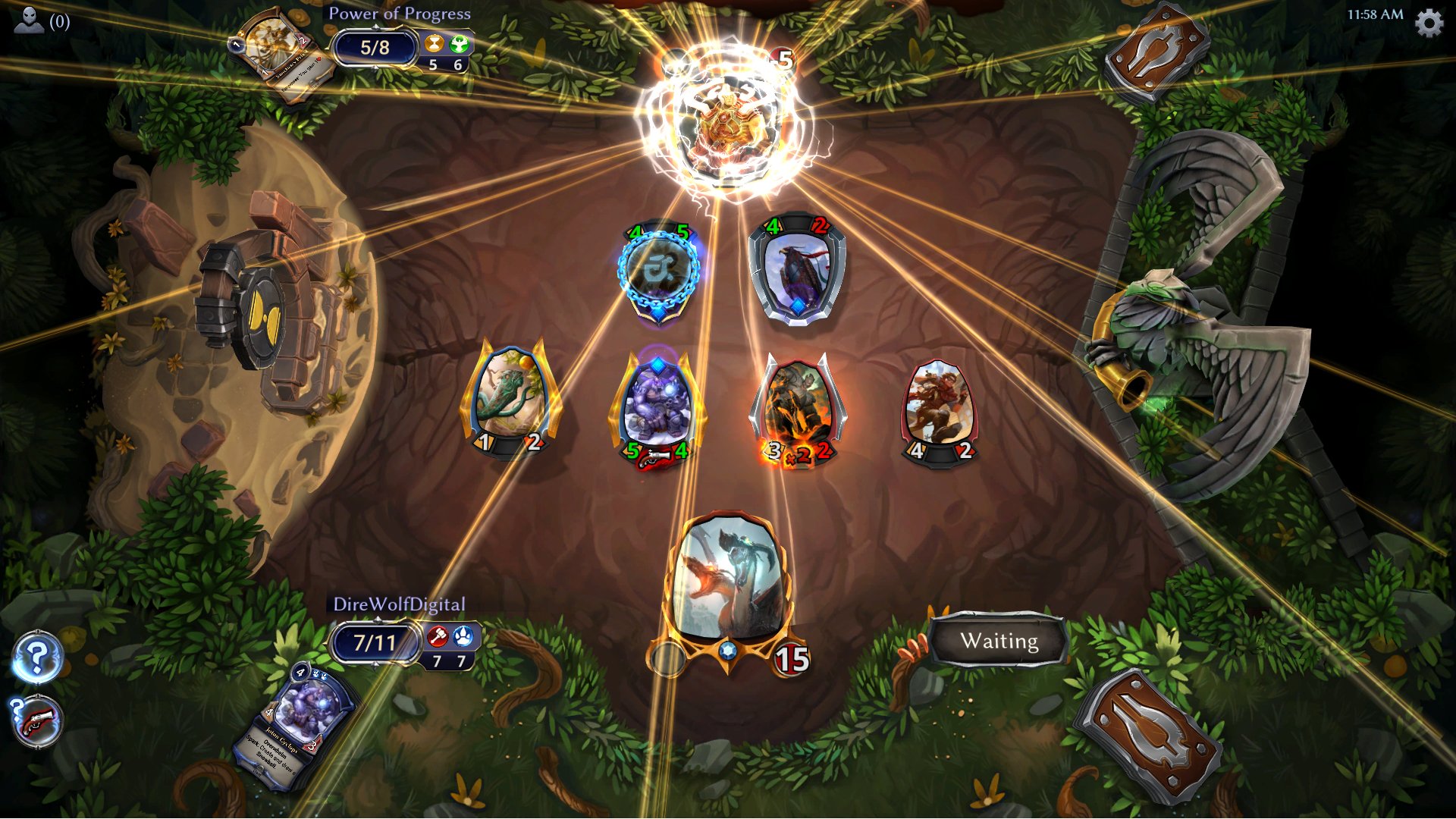 There's still an untold number of weeks (months) until Dota 2 card game Artifact arrives on our mobile devices to save us from mundane bus journeys and airport layovers. Valve have offered a release window for Artifact in late 2018, however that will be the PC beta and we'll need to wait another year for it to arrive on iOS or Android. So in the meantime, to keep your deck-building hands busy, we've shuffled through the best card games on iPad and tablet to deal you a winner. Here are the ones to go and grab right now:

In Faeria, you don't just build up your army on the board, you need to build the battlefield too. The hex-based tiles require terrain placing down before you can summon your minions onto them, and different types of land affect which minions you can place. This, combined with the shape of the path you lay out for your army to follow to your enemy's gates gives you a huge number of options for out-playing or out-manoeuvring your opponent. Keeping track of your minion strategy and your land strategy gives this an extra level of tactics that will keep you well-prepared for the three lanes of action on Artifact's game board.

The undisputed king of virtual CCGs. Hearthstone is pretty much single-handedly responsible for the renewed interest in a tabletop format that for the most part failed to make the leap onto digital battlefields. As you can see, there are other options if you aren't fully invested in the lore of the World of Warcraft, but as far as accessiblity while retaining depth goes this is your front-runner. Given its age there are a lot of cards to get your head around if you want to build a competitive deck, but it still has some of the fairest pack-earning reward systems in free-to-play while offering some very fun single-player adventures if you're not ready to get taunted by a real human yet.

The side-game that bumped your Witcher 3 campaign up from 100 hours to 150. This is one CCG that hasn't taken its roots directly from Hearthstone or its precursor Magic: The Gathering and is all the better for it. No hero health or card spell mana, and starting off with almost your entire deck in your hand, means the game is more about deceiving your opponent and choosing your time to clear their cards. Points are tallied up at the end of each round, so carefully managing your board and your opponent's is key to coming away with the W.

From a game with no ties to Hearthstone and Magic, to one that combines them more than any other. The Elder Scrolls: Legends lets you mix two factions' cards together for your deck, and also has two separate lanes to play minions into. One lane protects minions for a turn before they enter play, and a rune system that gives you a free card every time you lose five health. You've got to be careful about where you play your minions and when you deal damage to your opponent to avoid giving them an easy way out of a tough card draw lock.

On top of working on The Elder Scrolls: Legends for Bethesda, Dire Wolf Digital also have another card game in their stable: Eternal. This is a much closer approximation to Hearthstone, with a very familiar board set up and minion mechanics. However Eternal also allows you to do things like play instant cards during your opponent's turn, mix any number of faction decks together and choose the blockers when your opponent tries to attack one of your minions. There are multiple mana pools to denote each faction, so resource management and card strategy is a little more complex than Hearthstone, but that's exactly what you'll need to prepare you for the triple-board 4D chess layout of Artifact when it arrives on your tablet next year.