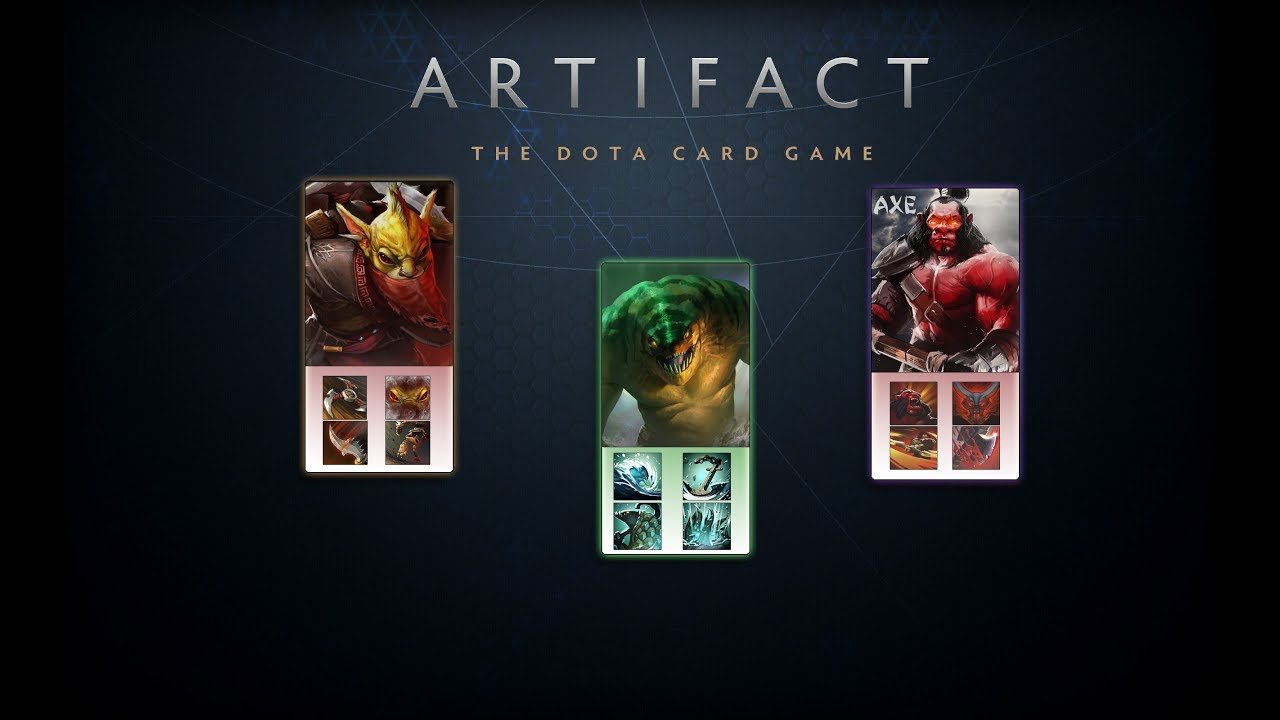 What's the deal with... Artifact, the Dota 2 card game?

Artifact, the Dota 2 card game spin-off from Valve, is finally starting to show its hand. We don't know everything about the collectible card game yet, but there's enough out there to form a picture of the sort of deck we're dealing with. So far we know how to play Artifact, which Dota 2 cards feature in it, a potential release date for the game and that it definitely isn't free-to-play. Here's what the deal is with Artifact.

If you're familiar with how Dota 2 works then Artifact may seem a little similar to you. The card game plays out over three lanes as you use your deck, featuring five heroes, to try and attack the opponent's towers. On top of these five powerful hero cards, there are also weaker minions, like the lane creeps that mindlessly run to their own doom, crashing against the enemy structures until it or they die.

Obviously to win you're going to have to knock down your opponent's towers, but balancing your aggression across three separate game boards will be key to not losing your own. Each tower on the three lane boards has 40 health and winning the game means destroying at least two of them OR knocking down one of them which opens the way to the Ancient. The Ancient replaces any fallen tower on its lane board and has 80 health, so if you're really rolling down mid you can go all-in for the game win.

As with most card games, especially those sharing the same heritage of Artifact and Magic: The Gathering designer Richard Garfield, every action costs mana. You begin with three mana points and increase by one after every turn, however minion kills also grant you gold – in that time-honored MOBA tradition. Gold functions as a currency for a second action, chiefly buying and equipping new items, weapons and armor for your hero cards and placing other cards into play.

To add just one more layer of complexity to proceedings, each card is given a color from Artifact's logo: red, green, blue or black. These colors determine whether you can play them in lane, and to do so you must have a hero card of the same color in the lane. For the most part, the card colors also represent what kind of spell they'll cast: black for single-target strong spells, blue for other strong spells, red for heroes that have high attack damage but are weak to spells and green for buffs and creep-focused spells.

There is currently no hard release date set for Artifact, but Valve have suggested a couple of release windows. The PC version of Dota 2's card game will appear in late 2018, and if it's anything like its MOBA predecessor that will come with a lengthy beta release so be on the lookout for keys. Artifact's announcement was made during The International, the biggest tournament of the year for Dota fans, so expect at least some more information at the end of August this year when TI8 takes place in Seattle.

As for the iOS/Android version of Artifact, Valve have suggested it will take at least another year after the PC version appears for it to arrive on mobile devices. That means the final version of the Dota 2 card game could appear on your tablets and phones sometime in late 2019, thought obviously game development cycles mean even this broad release window is open to shifting around a little.

As for the price, well Dota 2 being a free-to-play game may be setting you up for a shock here as Valve have indicated that the Artifact card game will have an upfront cost. After buying the initial game, there will also be additional in-game purchases for card packs which can either be for real money from the store or via the Steam marketplace for funds in your Steam wallet from trading or selling other cosmetic items.

It's unknown how you'll get cards in other ways, so buying card packs might not be the only option for expanding your collection, but at the moment that looks like an awkward proposition from Valve.