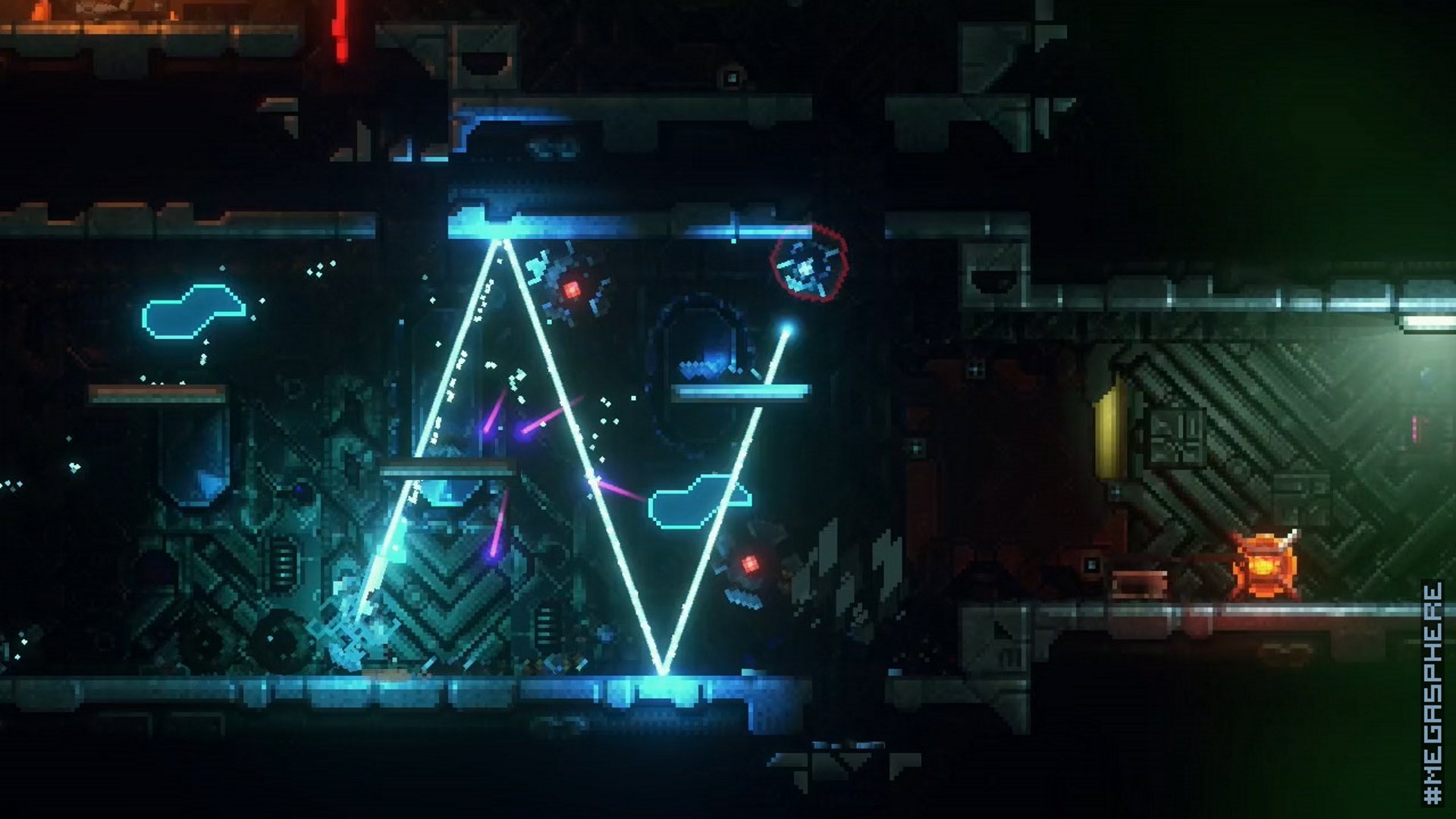 Every Saturday, studios and individuals the world over take to Twitter to share images and videos of their games in development as part of #ScreenshotSaturday. It’s a fantastic celebration of how widespread and varied game creation has become, not to mention a great way to keep an eye on upcoming gems or spot incredible artwork. Collected below are some of the coolest stills, gifs and videos from this weekend which we’ve gathered for your perusal pleasure. Cars, guns, swords or just a good friend — whatever your weapon of choice, this week we've got a game for you!

There are two kinds of players in racing games. Most are happy to be perfectionists, chasing those perfect corners to shave milliseconds off their lap times. Then there are the wreckers, players who want nothing more than to ram everyone else off the track, and out of the competition. If you’re one of the latter group, Thunder Rally might be the perfect game for you. Chucking 2-8 players into a top-down destruction derby, the aim is to launch your opponents out of the arena, or hit them hard enough to end their driving career.

To help you gain the edge, Thunder Rally offers what looks to be a fine selection of powerups. So far we’ve seen twin gatling guns which mount on either side of your car and a jet booster which grants some serious ramming power. Thanks to the physics engine it’s also possible to flip your opponents, forcing them out of their vehicles. Hanging around outside the safety of your car isn’t recommended however, as other racers will leave you as little more than a red smear if they catch you. Our favorite feature shown so far is that anyone knocked out from the round gets control of an explosive barrel catapult, keeping them involved in the fun. No word on a release date that we can see, but you can sign up for the developer’s newsletter to keep updated.

Knocked out this round? You've got a catapult now. Get even! #indiedev #indiegame #madewithunity #thunderrallygame pic.twitter.com/IQ8ep4XgrN

The galaxy’s stars have been blinking out one by one, and it’s up to a lone special ops unit to figure out what’s going wrong and put an end to it. How can one amnesia-riddled robot prevent the inevitable consequence of universal expansion? By shooting plenty of other bots with a big, shiny gun of course! MegaSphere is a 2D action-platformer with a heavy emphasis on gunplay. Built on a permadeath system with checkpoints, death causes the MegaSphere to rearrange itself, creating a new world each time you play.

There’s a huge swathe of upgrades to collect each run, and the weapons on offer include such delights as a flamethrower, ricochet-gun, scenery destroying grenades, and even a gravity gun style block flinger. Each is gorgeously rendered through pixel art and particle effects, and it all adds up to one of the most polished packages we’ve included so far in the showcase. MegaSphere is currently in Early Access on Steam, and with gamepad support built in we’re hopeful it’ll make its way to the land of consoles in the not-too-distant future.

Fling to the Finish! - SplitSide Games

Do you trust your friends? Enough to let them dangle you over a pit of certain doom? #gamedev #indiedev #madewithunity #screenshotsaturday pic.twitter.com/PzPxcVnVOo

Fling to the Finish is a game built with three ideas in mind: two controllers, four players, and a whole barrel of laughs. A 2v2 racing game, each team consists of two balls connected via rope, with players using the joysticks on a shared controller to maneuver their orb. Each ball can be rolled freely or frozen in place, forming a point for their partner to swing or roll from. Tracks include a range of jumps and obstacles to overcome, forcing teams into clumsy co-operation. It’s the perfect formula for laughter, with the added pressure of the race inviting more and more slip ups as each side desperately vies for the lead

We love that SplitSide Games has used playtesting footage to highlight Fling to the Finish!, as the unique atmosphere an offline, same-couch game can bring clearly shines through. It’s great to see the core concept causing bouts of laughter (and shouting) even in the early stages of development. No word yet on where we can expect to find the final release, but you can sign up to the mailing list for the chance to be an early playtester. Fling to the Finish is currently demoing at GDC 2018, with the build shown there to be sent out for further testing soon.

If love isn't trying to kill each other in a dance of death, then we don't know what is.
We're open to ideas though, -> https://t.co/T9FIwDDadt#indiedev #indiegame #ScreenshotSaturday #unrealdev #UE4 #UnrealEngine #Sinner #gamedev pic.twitter.com/r4xo1DZy9Y

It’s impossible to ignore the Dark Souls blood pumping through the veins of Dark Star’s action-RPG, but where Sinner: Sacrifice for Redemption differentiates itself is in its approach to boss fights. As a melancholic knight looking to atone for his sins, the aim of the game is to take down eight gigantic bosses. The first seven of these, based loosely on the deadly sins, can be faced in any order you’d like, and this is where the game’s narrative of sacrifice come to the fore.

In order to face each boss, a price must be paid. The nature of your loss will depend on the boss you choose, but can include losing a chunk of your health and stamina, or most of your healing potions. The real kicker here is that whatever you give up won’t be returned for the rest of the game. While most RPGs are an exercise in empowerment, Sinner instead asks what you’re willing to give up, and when. As you progress, the fights become harder and harder, encouraging you to tackle your most feared opponent first, while you’re in prime condition. It’s a fascinating premise, and one we’re keen to see if Dark Star can pull off in a satisfying manner.

Sinner: Sacrifice for Redemption already has a page up on the Steam store, but the game isn’t officially out until April 25, with simultaneous releases planned for both Xbox One and PlayStation 4. A few sites and streamers have been able to get their hands on test builds ahead of launch, and have generally praised the game’s atmosphere and design, with hopes that the weight and feeling of combat can be tightened up for release.

Redemption always has a price.
Are you ready to pay the price in blood,flesh and pain?
The Avatars of Sin do not forget.
Join us @ our https://t.co/T9FIwDlyOT
Wishlist us on Steam:https://t.co/UltEPxaImR#indiedev #unrealdev #UE4 #UnrealEngine #indiegame #GamersUnite #gamedev pic.twitter.com/g4DK8wFStW

Working on a lot of not "showable" stuff yet :D, but here, a new fx to show that the sword is charging #screenshotsaturday #gamedev #indiedev #pixelart pic.twitter.com/WOtLicJ6QC

Bleak sword is one of those games that, through some magical combination of art and animation, just seems to pop from the screen. Despite its minimalist, black and white pixel art, The detail it manages to convey is immediately memorable. The game itself sees you traversing a Super Mario Land style overworld map, which each level dropping you into a small-scale arena battle.The intensity and range of enemies you’ll face will increase as you progress through different worlds, and who knows, there may even be some boss battles along the way.

It looks like there’s still a long way to go for Bleak Sword, but developer Luis Moreno Jimenez has been handing out tantalising animation updates throughout development, so be sure to follow them on Twitter if your interest is piqued. Here’s a quick look at the game’s eerie sound effects and ambient audio:

Could it be that @KissaKolme is oficially the awesome Sound Designer of Bleak Sword? :D #gamedev #pixelart #screenshotsaturday #indiedev pic.twitter.com/ki3QwhKoi1