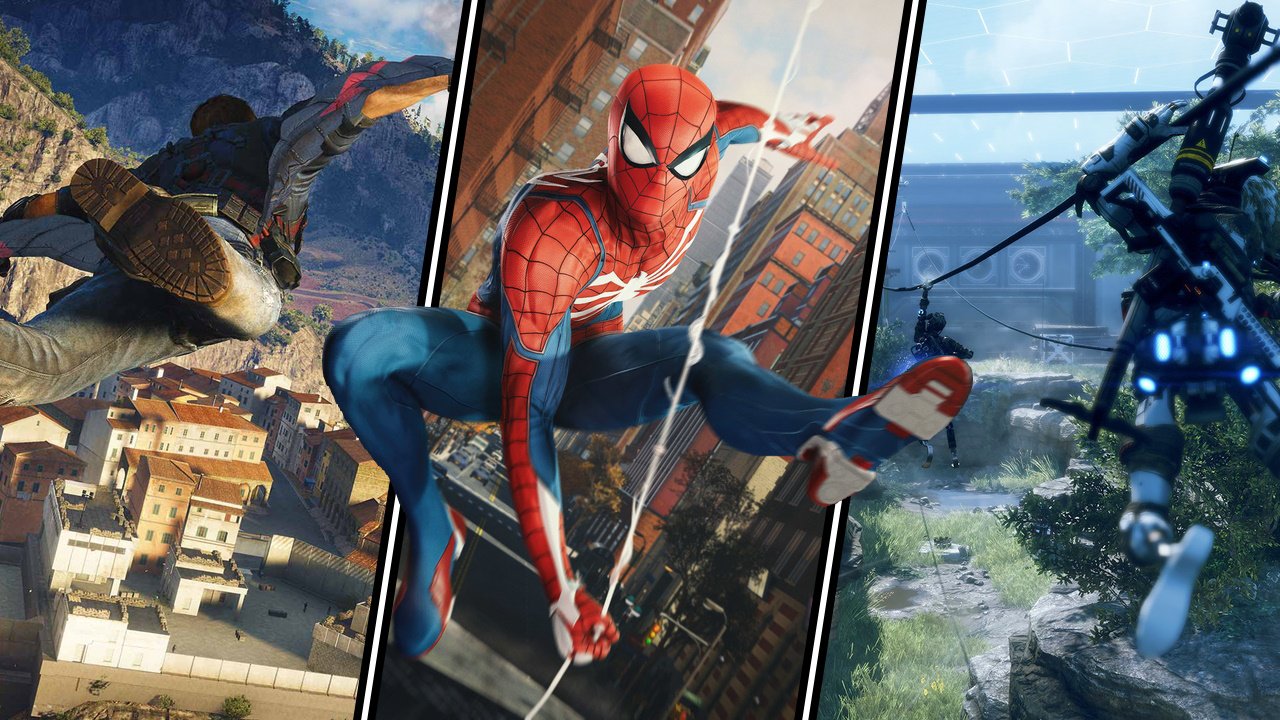 The best movement mechanics in games

Fast travel is no fun. If you’re going to drop us into a giant world, at least making getting around it part of the pleasure. The best movement mechanics in gaming transform traveling, letting us rejoice in a simple trip from A to B. Here are our top picks for mechanics that turn video game traversal into a highlight.

Crackdown’s most moreish gameplay loop was, by far, leaping around and collecting the open-world crime game’s agility upgrades. As the newest supercop on the block, you start out with merely extra-human abilities, the power to jump over a truck or punch a guy across a street. But through using your powers more and more, you amp them up – except for driving, which no agent ever did as a result of it being far too fun to jump everywhere.

Once enough agility orbs have been harvested from increasingly precarious places, you can leap over entire buildings and sprint faster than any vehicle in the game. There were also certain skyscrapers that required high agility levels in order to scale, turning them into a sort of metroidvania platforming puzzle, stretching up into the clouds. All the more satisfying to throw yourself off and into a ground pound, smashing a pedestrian into the pavement like an angry meteor. Bounding around and abusing your authority has never been so fun.

Titanfall’s pilots aren’t your average multiplayer FPS schmucks. Where many games considered shifting your legs a little faster a movement “ability”, Titanfall saw an opportunity to evolve. Why run on the ground when walls are right there? Its levels are transformed by this addition, reimagining restrictive alleyways as vertical playgrounds to scale, bound, and slide about. Throw in double jumps and speed boosters like the stim injection or sequel’s grappling hook, and you have a recipe for both extreme finesse and fun.

In Titanfall 2, those systems were given the chance to shine in an outrageously inventive solo campaign. One level has you bounding between components on a mega-factory production line, while another sees you manually time traveling between each jump, all while popping shots off at enemy grunts and monsters. A game in which the main focus is stomping around inside a giant mech has no right making its external motion this slick.

Apex Legends brought through many of Titanfall 2’s finest mechanics, including the knee slide, zip lines, and grapple, but wallrunning was sadly left by the wayside. Unless, that is, developer Respawn decides to return to this spectacular sci-fi series in future.

2004’s Spider-Man 2 was the web-slinging champion for over a decade. Right up until, that is, Marvel’s Spider-Man on the PS4 utterly blew us away. Insomniac’s take on the smart-mouthed superhero puts the joy of navigating Manhattan above all else. Chaining swings together to slip between two skyscrapers, wallrunning along the edge of an office before springing off to sweep low over citizens on the street feels nothing short of glorious.

Crucially, Parker – and Miles in the standalone spinoff – are entirely under your control, actually latching webs onto buildings instead of flinging them magically into the aether. Better yet, the right upgrades mean even missed jumps won’t kill your momentum, letting you bound forwards off any surface. Sure, there’s a subway fast-travel mechanic, but why would you ever use it when getting to and fro is this much fun?

Counter-Strike is that game about teams of terrorists and FBI agents planting bombs and shooting each other, right? Not in our teenage years, that’s for sure. You see, Valve’s immensely popular FPS series has always had a second life as a modding hub. Community servers for CS: Source ran a gamut of weird and wacky variants that shook up everything from weapon and damage numbers to the world’s physics. The best of them all? Surfing.

By slightly tweaking the base game’s air velocity, tinkering players found it was possible to not just slide along sloped surfaces, but build up speed, too. It’s essentially skating your way along a bizarre, triangular track. And people have gotten very, very good at it. The most complicated surf levels require pinpoint precision, asking you to flick upwards off ramps before zigzagging through obstacles mid-air to land at the next checkpoint.

Part race, part obstacle course, Counter-Strike surfing is an experience that doesn’t exist anywhere else in gaming, and it still lives on today through CS:GO’s custom lobbies. Keep an eye out for professional CS:GO players dabbling in it between matches.

Open-world city designs never quite managed to feel as immersive or alive as they could have until Assassin’s Creed opened up the rooftops. But all that height and verticality would have meant nothing if it weren’t for Altair’s swift-footed traversal of the minarets and souks of Acre and Damascus. Breaking free of the in-built street-level GPS and heading straight as the eagle flies across the city was revolutionary, as was the vaulting and context-sensitive hopping over poles and grasping at ledges.

And the game’s generous performance of all these leaps and flips if you just held down the sprint trigger made it even easier to fall into a parkour trance. An unbroken sprint could quickly veer you off course to your next assassination appointment as you got lost in the flow of keeping the streak going. You almost don’t want to arrive, if there was a particularly tempting pole jutting out of a wall at perfect swinging height but in the wrong direction for your target. That’s the sign of a good traversal system (and a bad assassin).

Already one of the best tools in the vast video game arsenal, the grappling hook was given the Michelin star treatment in Just Cause 3 and 4, elevating it to new heights of entertainment. Standing on the ground? Grapple the floor ahead and open a parachute to inexplicably launch into the air. Already aloft? You can grapple the floor, walls, or pretty much anything to gain speed and often height. See a vehicle? You can grapple onto it and take control – even with enemy helicopters. When you've had your fun, leap off and parachute or wingsuit to safety as your ride crashes below.

Just Cause doesn’t just let you grapple onto anything, it actively encourages it during combat and exploration. You can even tether two objects together with the grapple, creating entertaining scenarios like forcing a helicopter to fly into a blimp. Grab an unbreakable tether mod on PC and you’ll probably spend more time stitching cars to the back of planes than actually, y’know, liberating the local population. We wouldn’t blame you, either.

Even if you played it, you’d likely forgotten all about Prototype before reading this entry. It featured a forgettable main character, bland brown-gray visuals, and a story fit for a straight-to-DVD B movie. But none of that mattered when the game was willing to give you ridiculous superpowers and simply let you loose on a city.

Hooded protagonist Alex Mercer is imbued with monstrous shapeshifting, a power the developers apparently took to mean he can ignore the laws of physics entirely. Mercer is capable of sprinting up skyscrapers, gliding and dashing through the air, and slamming down in devastating fashion.

Ol’ Spidey might need to avoid causing too much damage, but as a somewhat villain, Mercer has no such qualms about tearing up the streets.and anyone unfortunate enough to be in his path. Toss a bunch of hijackable tanks and helicopters into the fray, and you have a recipe for a seriously entertaining, if unmemorable, blast.

Breath of the Wild’s everything

Breath of the Wild feels like a cheat code of a game. Six years on, we’re still baffled by the sheer amount of stuff the game gives you freedom over. See that mountain? You can climb it. You can climb anything, in fact, and even if you don’t have enough stamina, Link will just wolf down some meals mid-hike to top up your reserves.

And the glider, oh that glider. Sailing link through the air at a generous pace, it makes any mountaineering worth it for the descent alone. Games like Horizon Forbidden West have certainly tried to ape it, but Aloy’s shieldwing comes up short both in literal distance and satisfaction.

And that’s barely skimming the surface of traversal systems Breath of the Wild offers. There’s horseriding, of course, but why not mount a bear, go shield-surfing down a snowdrift, hitch a ride on a bomb-fueled minecart, or latch yourself to a seal so you can slide across the sands? Movement is every bit as important to Breath of the Wild as the world you’re doing it in.

What are your favorite movement mechanics in gaming? Let us know so we can waste even more time wandering the virtual wilds with them.

Additional contributions to this article were made by Chris Higgins.