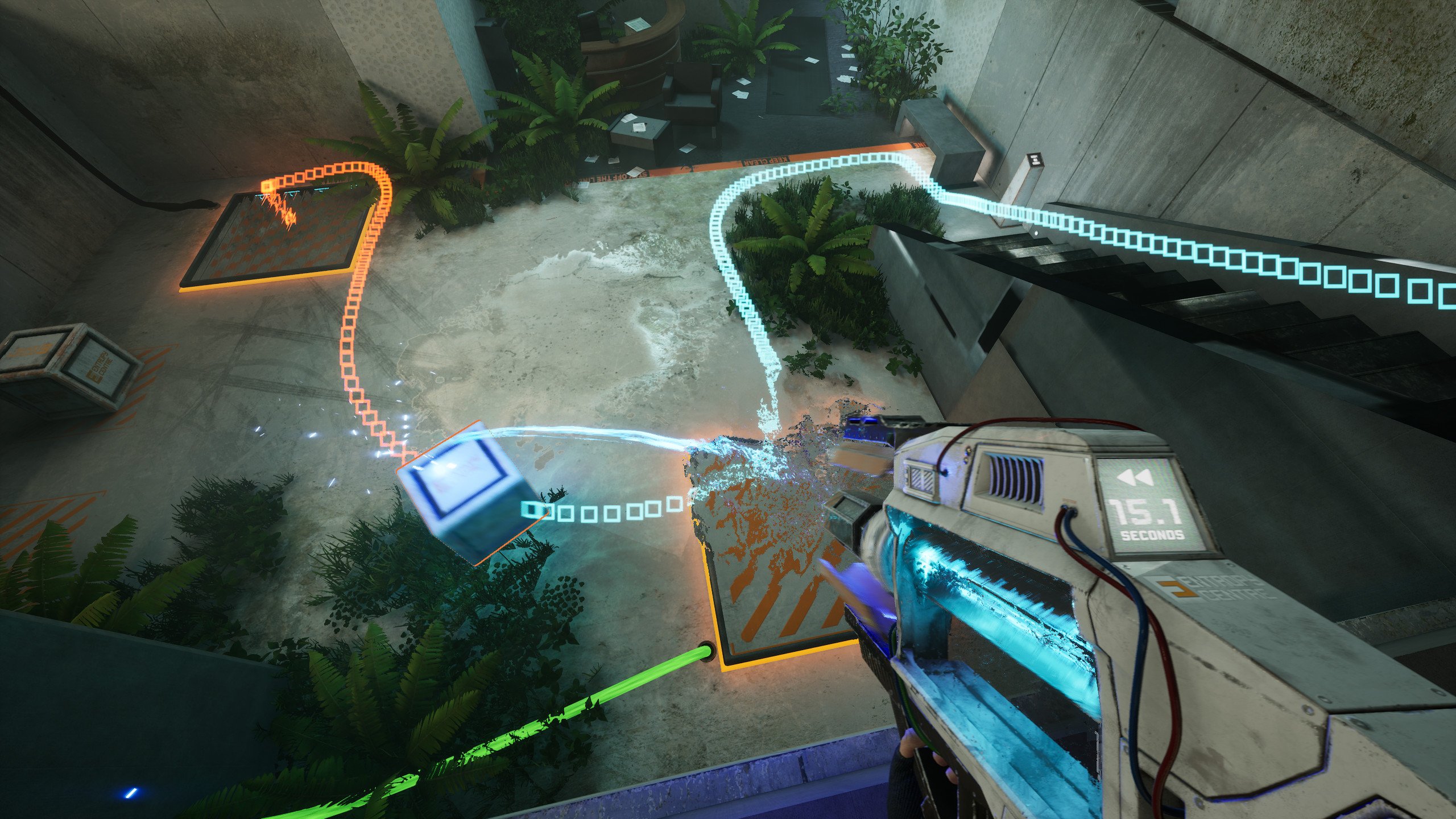 Yes, the Earth is exploding, but could you just give us a minute? We’ve almost got this one figured out. Putting boxes onto switches is such a staple of first-person puzzling by this point that we’re starting to believe it might be as intrinsically satisfying to humans as popping bubble wrap.

Then again, we’re almost certainly underselling the caliber of creative talent that goes into crafting a game on the level of Portal or The Talos Principle. It’s not clear yet if The Entropy Centre can measure up to such heights, but after rewinding our way through the game’s brief Steam Next Fest demo, it definitely scratches that same box-shifting, puzzle-pondering itch.

Comparisons to Portal aren’t for nothing – The Entropy Centre is unabashed in its inspiration, plonking you down in test chambers complete with an AI companion and dubious experimental motivations. The setup is the same, but the execution is very different. Rather than stitching two points in space together with wormholes, time manipulation is the heart of the puzzle. More precisely, the ability to rewind certain objects through the recent motions of their past. Shift a box from A to B, and your magic entropy gun can zip it right back again from afar.

Puzzles, therefore, are all about the setup. If you need three door switches activated in a certain order – A, B, C – you’ll need to move the triggering box between them in reverse – C, B, A – first. That way, when you come to rewind, everything plays out exactly as you need it.

It’s a simple concept once you get your head in gear, but the demo isn’t afraid to tease the extra ideas that can be built on top. Objects can be paused and dropped mid rewind, jump pads and barriers force you to think about the paths you create in advance, and multiple objects can be rewound at alternating times with potentially brain-melting results.

None of the Entropy Centre’s demo puzzles had us stumped or studying the room for long, but they certainly left us eager to see the more rigorous challenges that developer Stubby Games has prepared for the full title. Add to that some genuine humor which lightens the bleak environments and the obligatory email logs to discover so you can piece together the abandoned facility’s story, and there’s plenty of satisfying puzzle potential here.

There are certainly some quirks that stand out, including inconsistencies in how the rewind affects different objects outside of puzzles, which items you’re allowed to interact with or throw, and what exactly solving box puzzles has to do with the universe’s natural tendence toward disorder. But if you’re a fan of Portal or similar games, you should absolutely check out The Entropy Centre demo during the current Steam Next Fest. You’ve got until October 10 to do so, and The Entropy Centre launches fully for PC, PlayStation, and Xbox on November 3.