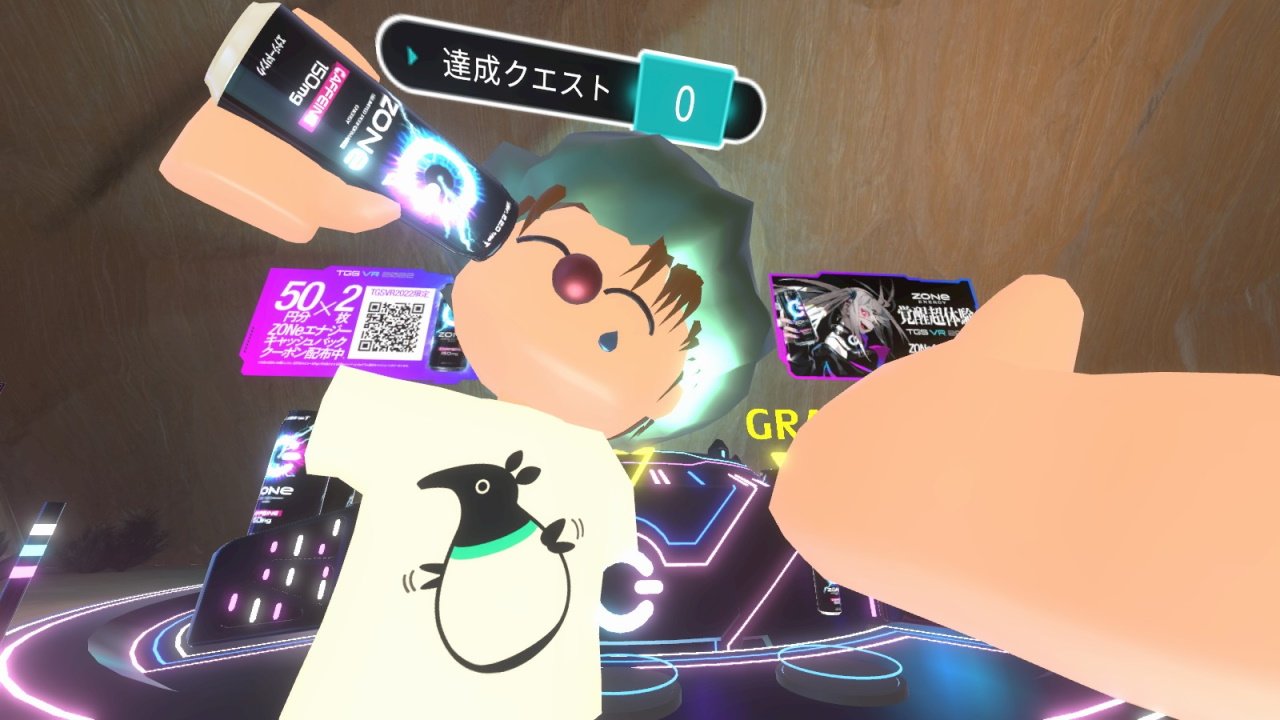 While the real Tokyo Game Show rumbles along in Japan, its metaverse incarnation is alive and, uh, well, there. TGS VR 2022 lets those with a virtual reality headset dive into a digital exploration of exhibitors, environments and trailers. You can even unlock ridiculous outfits and take selfies along the way. Is it entertaining, and does it actually work as an experience? We took a virtual photo tour of TGS VR 2022 to find out.

Our TGS VR 2022 experience kicks off with a slightly bizarre opening where a bunch of these mole people are all talking about mining and don’t seem entirely sure why you’re there. Still, you can’t deny that they're kinda cute, unlike our Ralph-Lauren-sporting avatar.

Starting in the Desert Zone, Capcom’s virtual booth says hello with a gigantic exoprimal dinosaur. He didn’t seem much fussed by my greeting. There was also a Street Fighter section with neat art of the main games in the series. Not much in the way of games, mind.

Unfortunately, it’s at this point that we discovered watching low-rez trailers for video games through a VR screen isn’t exactly a quality experience, in more ways than one. Especially when you’re not even given the luxury of a fast forward or rewind button. Anyone got a YouTube link instead?

But hey, you get a hat for watching and look, you can high-five Ryza from the Atelier series. That’s kinda neat, we suppose.

Things are on the up again. We have no idea who this guy is, but he’s adorable.

And look, here’s that Kojima Productions VR project everyone was going crazy about – surely it’s got to be something cool! It’s… a non-interactive replica of the company’s entrance hall -- complete with a tease for their new project -- and that room Norman Reedus poops in in Death Stranding. Okay…

One thing that was actually cool was the wealth of game art to ogle. In Square Enix’s part of the crystal section was a gorgeous gallery of official art from the Final Fantasy series. Unfortunately we ruined it for you by sticking our dorky character in the middle.

There were also some pretty detailed 3D models to check out, including Final Fantasy’s Sephiroth and a YuGiOh bit that summoned monsters from cards when you stepped on them.

No idea what was going on here but this anime girl kept doing a creepy laugh whenever we approached. Avoid if you don’t want to get murdered in VR.

One thing inescapable in the TGS metaverse? Your corporate overlords. Sponsorship companies pop up through the entire area, including this aggressive energy drink. Don’t make us put on the suit again, please.

Moving on to the forest zone, it was time for SEGA. Sonic’s a lot bigger in VR than you might have realized, but by dressing as a zombie we were able to take him out and wear his face as a hat. No one will be able to tell the difference.

Again, nothing much to see here beyond a few trailers you've already watched online and promotional pictures of the game.

Time for another sponsor break -- this time for some coffee. Should Blue Eyes White Dragons even drink caffeine? Don’t ask questions when they’re paying the bills, just consume!

With the main zones completed, we wandered into this weird pre-recorded boat race segment. We can only assume it was another sponsor, but we weren’t even sure if it was advertising a real boat or a virtual one. Still, if you needed a better summation of the corporate metaverse, here’s a blobby avatar wearing a Sonic hat dressed in a Ralph Lauren shirt and riding a boat. Make of that what you will.

And finally, to end on something that was actually pretty cool. The lower levels of the central ring housed a gallery archive of Famitsu magazines. The deeper you traveled, the further back in time you went. Each stage included information on big game releases of the year and there was even a quiz to complete as you went.

Overall, TGS 2022’s VR incarnation was a bizarre thing. Digital incarnations of trade shows still don’t exactly know what they’re aiming to be, relying almost entirely on the “wow” factor of being in a 3D space. Giant models of characters are cool and all, but wandering largely empty halls to watch blurry trailers is a miserably inefficient experience compared to simply browsing the web.

There’s fun to be had in unlocking outfits and taking virtual selfies in mocked up video game environments, but there’s little else to actually do or learn within the world. Interacting with the majority of signs simply links out to a traditional web browser on your PC, begging the question as to why the virtual space is even there in the first place.

If anything, TGS VR 2022 left us wishing for more virtual reality museums than trade shows. VR worlds offer a novel and interactive perspective from which to learn more about history, art, and culture. Sadly that doesn’t feel like it lines up with the money-centric gaze that most companies enter the technology with. Maybe next year will be better, if it still exists…