Snack-scavenging raccoons and rhythm-based rumbles stood out during the Gamescom 2022 Future Games Show. 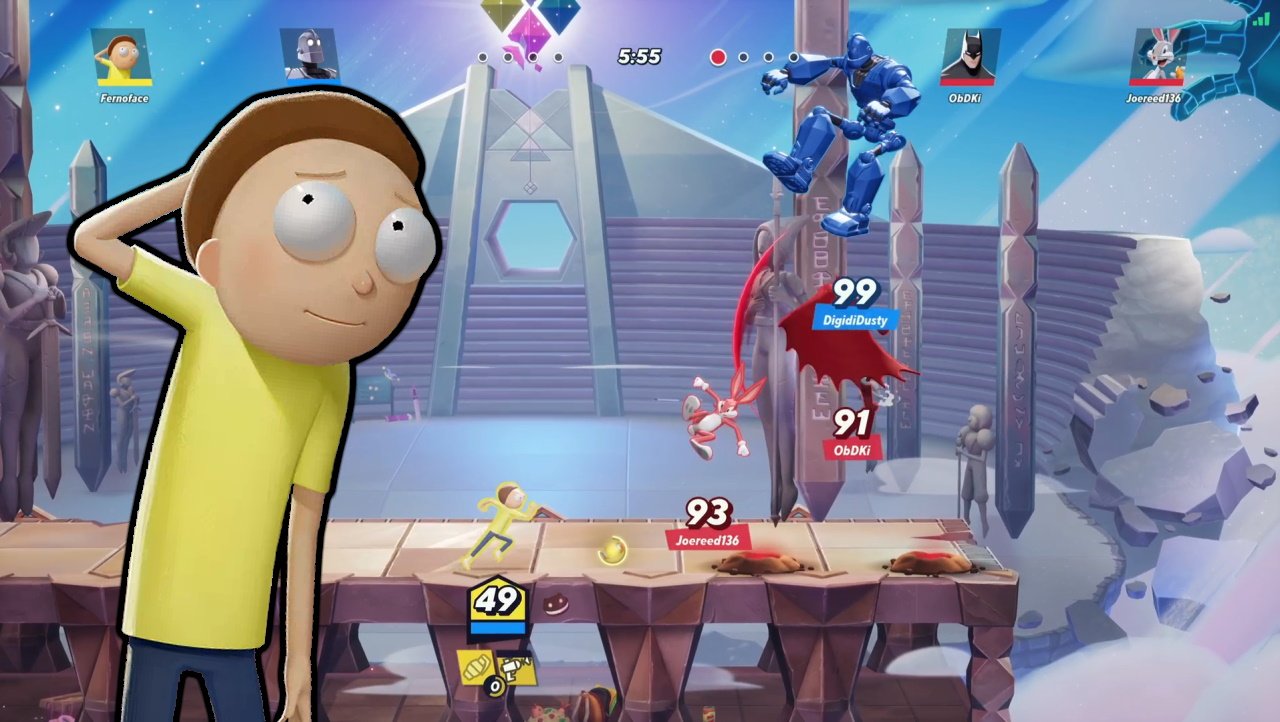 Dark Souls 3 rises from the bonfire, but the original and its sequel remain offline.

In his MultiVersus incarnation, Morty is one of the strangest characters in the roster. Listed as a Bruiser, he plays partly as a ranged fighter, partly as a melee brawler, and partly as a teammate-saving support. Our MultiVersus Morty guide will help you get to grips with the Morty moveset, teach the best perks for Morty, and walk you through some basic Morty combos you should be using.

Morty’s moveset in MultiVersus is extremely complicated compared to the rest of the cast, as he comes with a wealth of cooldowns and conditional attacks. We’ve broken down the key moves below that you need to understand.

Morty fires a projectile which splits in two after a short distance. After the split, one part travels upwards and the other down. This attack has a short cooldown. If on cooldown, morty fires a small laser which deals a few points of damage but doesn’t stagger enemies. Activates the same cooldown at Up Attack.

Much like the Neutral Attack but Morty fires the projectile upwards. The split then happens to the left and right, arcing down slowly. Activates the same cooldown as Neutral Attack.

Morty begins running a Plumbus along the ground, hitting any opponents he touches and inflicting the Weakened Status Effect. Allies passed are Cleansed by the Plumbus. Can be held infinitely long.

Morty throws a grenade that detonates after a lengthy duration. The throw can be charged and angled. Morty has a base ammo of three which recharges slowly. Grenades can be hit by allies and enemies to knock them around. Grenades can be picked up and thrown by allies.

If Morty has a grenade out, Neutral Attack will automatically target and shoot the nearest grenade, detonating it. If a grenade is hit by side special, it will split into two grenades with short detonation timers.

Side Special: Power of Earth / Another Portal?

On Ground, Morty charges a spike of rock which appears from the ground in front of Morty. The distance it appears at depends on the charge. The rock inflicts stacks of the Weakened Status Effect on enemies. If the rock hits a grenade, it splits it into two grenades with short detonation timers.

In the air, Morty aims a short range teleport, opening a portal at the position he starts from. If off cooldown, the starting portal remains in position for a lengthy time. Any allied projectiles fired through the portal are sped up dramatically. This is Morty’s primary recovery tool.

Morty summons a spaceship platform beneath him (at around two full jump’s height if airborne) which slowly rises off the top of the screen. Has a lengthy cooldown.

Morty marks his current position, leaving a trail behind him for a short duration before teleporting back to that place and healing slightly. Use Down Special again within the duration to immediately teleport back. Morty will leave a grenade at the position he teleports from. Any allies who would be rung out while Down Special is active will instead teleport to Morty’s position. Has a lengthy cooldown.

Morty relies on a high number of cooldowns for his key attacks, meaning reductions are essential for him to perform at his peak. He also unleashes a lot of projectiles, so our perk choices aim to boost this and his maneuverability.

Ice to Beat You (Offensive)

Morty thrives off chaos and having someone else keep the opposition busy while he sets up grenades and portals. He’s also pretty light, and as such, larger or heavier fighters like Iron Giant and Wonder Woman make for good allies. The latter will also benefit from any cooldown reductions. Morty also pairs well with other projectile users like Bugs Bunny and Tom & Jerry as he can boost their attacks and flood the screen with dangers.

Morty plays quite differently to the rest of the game’s cast, so don’t worry if it takes you a while to adapt to using him. You’ll need to dash in and out of range of your opponents, dropping grenades and laser attacks between axe swings. Your aim is to frustrate them into throwing out attacks you can punish, building up damage until they reach kill percentages. Here are some key MultiVersus Morty tips and tricks that’ll get you in the right mindset.

1. Hit grenades to give them impact damage

Morty’s Grenades are the core of his kit, and you can make them more dangerous by giving them a whack after throwing. Rather than charge your throws, toss grenades a short distance then follow up with an aerial or side attack to send them flying forwards. This will make them active, knocking back any opponents hit and healing a healthy chunk of damage. You can follow up by shooting the grenade, or leave it out as a present danger.

Here’s a comparison of a thrown grenade and a hit one:

If you’re playing with a friend, encourage them to pick up and throw your grenades at every opportunity. With the Oh That’s Still a Grenade Perk equipped, this will give them an enormous blast radius.

2. Approach with side air

Morty’s side air axe swing comes out quickly, has great range, has a built in followup, and combos into his grounded jab when used low. This attack should be your go-to choice when hopping around the stage. As you'll see in the combos section below, it can set you up into a number of different moves.

Morty’s main kill moves are his down air and up air. Both are powerful strikes, and the two even combo into one another. Once your opponents are past 120%, you should be finishing to land these as quickly as possible. Up air is extremely powerful at all percentages as it will Ignite enemies hit, dealing extra damage over time. Down air is also a powerful spike off stage if you want to earn earlier kills.

4. His Up Attack is better than Neutral

Morty’s Snakes gun attack is put on cooldown either by his Neutral or his up attack. While the Neutral is useful in combos, the Up Attack is far more dangerous in general play as the snakes will split apart and cover a huge space either side of Morty, even travelling off stage.

5. Don’t underestimate his gun on cooldown

While on cooldown, Morty’s Neutral Attack fires a rather feeble plasma shot that doesn’t interrupt enemies. While it is weak, you should be blasting this constantly while moving to keep building up damage on enemies. Add in some small jumps and Morty will rapidly fire two shots when landing. If you have a portal out, the shots will gain a huge speed boost when passing through it, making them more effective at range.

6. Use Plumbus to cleanse allies and break up attacks.

Morty’s Down Attack, Plumbus Time!,  isn’t great in 1v1s. In 2v2s, however, it will instantly cleanse allies of negative effects like Weakened or Harley’s sticky bomb. Don’t forget to use this to make your ally’s life that much easier. If they’re getting pummeled across the stage, pulling out the Plumbus and charging over is a great way to mess up their attacker’s combos.

7. Use Down Special to save allies

Morty’s Down Special, Temporal Back-Up, is great for letting him get stuck in before quickly ducking out. What it’s better at, though, is saving your partner in 2v2s. If the move is active when they would be rung out, they’ll instead teleport directly to Morty’s position.

If you see your ally about to be spiked off stage or carried to the blast zone by something like Superman’s grab attacks, activate Down Special and you’ll protect them from an early K.O. It’s a powerful enough effect that it’s worth saving this attack for that exact reason.

Morty won’t be landing many complicated combos, but there are a few nasty attack sequences worth practicing.

Many make use of his laser when it’s off cooldown, so be aware that you’ll need it to link together hits. We highly recommend having Neutral Attack assigned to its own button (R1/RB by default) to pull it off easily. Here are the best MultiVersus Morty combos we’ve found so far:

One of Morty’s basic combos is chaining his Down Air directly into Up Air. At low percentages you’ll need to drop into the Up Air, while at high percentages you can guess which  way your opponent flies and hope for an early kill. This combo will also Ignite them for some extra damage.

That Down Air to Up Air combo you learned above? Here it adds a nice chunk of damage after opening with a Side Air into Neutral Attack combo. Make sure you move sideways with your opponent as you hit them with the Side Air to ensure you don’t miss the following attacks.

Side Air -> Down Air

This isn’t always a guaranteed combo as it depends on the bounce of your opponent, but at high percentages you can sometimes combo Side Air straight into Down Air for a kill. You’re looking for your opponent to bounce into the floor after the Side Air, stunning them long enough for you to rapidly jump and Down Air.

An alternate combo to inflict the Weakened status and damage on enemies is to follow your side air’s first hit with Morty’s Neutral Attack before comboing a couple of jab hits into his SIde Special rock. You’ll need to input the attacks pretty rapidly or your opponent will have time to dodge out of the sequence.

One challenging but high-damage combo you can practice cancels Morty’s second jab into his Side Special to knock the opponent back towards you. You can then follow that up with the Down Air to Up Air combo once they’re Weakened. This one is tricky as you’ll need to push the Side Special enough to land behind the opponent. If it hits in front, they’ll fly away from you instead.

That’s all we have in our MultiVersus Morty guide. Now that you’ve learned Morty combos, why not move on to our Velma, Superman, Batman, and Wonder Woman guides as well!