When to watch Opening Night Live and all the Gamescom 2022 shows. 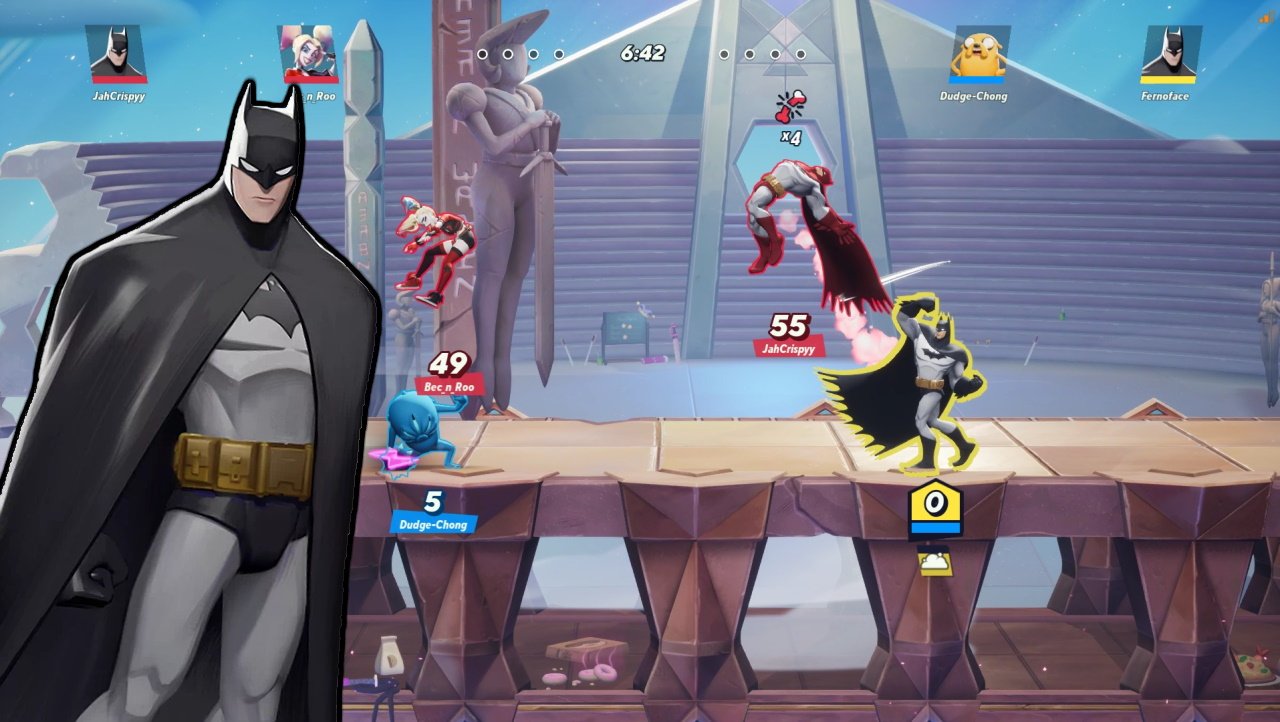 "You have no idea what loss is."

Gotham City’s detective isn’t afraid to get his hands dirty in MultiVersus, and your hands will certainly be busy while making the most of Batman’s moveset. In this MultiVersus Batman guide, we’ll talk you through the key tools the Dark Knight has, tips and tricks to mastering him, Batman’s best perks and partners, and break down some basic MultiVersus Batman combos to work into your arsenal. If you want to learn how to play Batman in MultiVersus, you’re in the right place.

Rather than break down the entirety of Batman’s moveset, we’re covering the key components you need to be aware of and how they fit into his playstyle

Passives: While Invisible, Batman gains Hasten and applies stacks of Weakened to any enemies hit. Batman can also hold jump or up in the air to slow his fall with his cape. Finally, like Superman, Batman can dodge upwards or diagonally into the air from the ground.

Batman throws out a Batarang in front of him. The Batarang’s direction can be controlled while moving Batman with the left analog stick. This is by far one of Batman’s most powerful tools, and can be used as a combo extender, edgeguarding tool, or generally to pester the opposition. Has a cooldown that is significantly reduced if you collect the batarang.

Up Attack: Clear The Air

Batman sweeps his cape in front and overhead. While not exciting to look at, this is a key anti-air tool that’s effective against opponents approaching from above.

Batman swings his foot down from overhead, spiking anyone hit. There’s a lengthy wind up, but this move is a powerful combo tool and kill move at higher percentages.

Batman enables a Bat Bomb that will stick to the opponent on next hit. The bomb counts down three seconds before exploding and knocking the enemy upwards. A combo extender, interruption, and sometimes even kill move, all in one. Puts a lot of pressure on your opponent. Has a significant cooldown.

Batman points a grappling hook sideways which can be aimed up and down before firing. Latches onto allies, enemies and surfaces before pulling batman towards them. Batman hits enemies along the way but can also dodge out of the move. A superb pressure tool and one of Batman’s primary recovery options.

Batman rapidly deploys a smoke bomb which grants him and his allies Invisibility and Projectile Sidestep, as well as faster recharge for their dodges. Allies receive brief invulnerability on impact and enemies are Slowed while inside the smoke. Has a significant cooldown.

Batman punches upwards in an uppercut with his cape, knocking enemies upwards. Can be charged on ground. One of Batman’s vertical kill moves when used in the air. It isn’t a brilliant recovery tool, so save your Bat Grapple to retreat to stage instead.

Batman’s moveset relies on his speed and tools, so our choice of Batman’s best perks aims to enhance both of these aspects further. You’ll need to use Perk Training to unlock some of them, meaning Batman will need to be over level 9.

As always, it’s worth noting that perks should be adjusted based on your stage and opponents. Against characters like Superman, Garnet, and Wonder Woman, for example, it’s highly recommended to equip Armor Crush over something like I'll Take That.

Here are the best perks for Batman in MultiVersus:

As a rapid melee fighter, Batman thrives on closing in during chaos. As such, he pairs well with projectile-heavy characters like Bugs Bunny, ReinDog, or Tom and Jerry. He also benefits from armor allowing him to initiate freely, making Wonder Woman a solid choice for a Batman partner too. Finally, characters which excel at finishing opponents off after Batman racks up the damage can also paper over his lack of finisher moves.

Batman is a Brawler character, but he plays very similarly to most Assassin-type fighters in that he’s designed around rapid combos and movement that pile pressure on enemies for early kills.

Batman struggles to finish off high-damage opponents as he has very few direct kill moves in his kit. As such, he is a difficult character to play well who requires fast inputs and good knowledge of the game. Here are some key Batman tips and tricks to best your foes.

Batman’s entire kit is built around unrelenting pressure. While you’ll rarely be putting out true inescapable combos for long periods, you will be able to chase opponents continuously using his dodge jumps, Bat-Grapple and aerial combos.

Much more so than other characters, you will want to practice dodge jumping and dodge attacking with Batman to rapidly close down the distance on opponents before they can react. Dodge jumping out of his smoke bombs makes him even faster and applies Weakened to enemies hit.

Many of Batman’s moves are two-part ones that can be optionally followed up with a further hit. It’s worth learning and remembering them:

Up Air: Batman Swings a fist overhead once, then again if you press attack a second time. The second hit applies Weakened. You should almost always use the second hit of Up Air when able.

Down Attack: Batman slides along the ground, then can follow up with a heavy boot kick. The direction of the kick and be changed to hit the other way if you angle the stick.

Side Air: Batman charges a kick. If he remains in the air, this can be followed up with a punch that sees batman turn black and rapidly move diagonally until he connects with an enemy or the floor. The second punch hits enemies diagonally down and applies Weakened. A great off-stage finishing tool or repositioning option while in the air.

3. You can control the batarang (and use it to edgeguard)

An easily missed feature is the ability to control where the batarang flies after you fire it. This makes it an exceptionally powerful edgeguarding tool against opponents knocked off the side of the stage. Don’t just use it at range, though, as it’s actually one of Batman’s most powerful combo tools, as we’ll demonstrate later in this guide.

In addition, you can also apply the Bat Bomb via the batarang – you don’t even need to have equipped the bomb first. Just tap Neutral Special before your batarang hits and it’ll apply the bomb for you.

Unless you can interrupt a recovery, Batman struggles to land finishing blows on opponents at higher percentages. His best direct kill moves are his Down Air on grounded opponents (usually above 130%) and Up Special against airborne enemies, or when fully charged on the ground. Otherwise, your best kills will usually come from hounding opponents off stage and attempting forward air or down air spikes.

5. Recover with side special and glide

Unlike most characters, Batman’s Up Air isn’t much of a recovery tool. As such, you should primarily use his passive glide (hold jump), dodges, and Bat-Grapple to make it back to the stage. Save your special uses when you leap off for edgeguards and can return from extremely deep even without any jumps left.

Be careful though, because your opponent can see where the grapple is headed, they can attempt to spike you as you arrive. Mix up the height of the wall you aim at, and remember that you can dodge on arrival with the grapple, too.

6. Mix up your Smoke Bomb attacks

Smoke Bomb is one of Batman’s most powerful tools. It doesn’t just buff him, it makes anticipating him that much harder. You’ll mostly be dodge jumping out of it into aerial hits, but don’t let yourself become predictable. You can also use the Smoke Bomb to conceal a Batarang or Bat Grapple Strike, giving your opponents little time to react. Deploy it at a middle distance, then surprise your enemy every time you strike out.

Batman is one of the more complex characters in MultiVersus when it comes to combos. You’ll need to be quick to react to your opponent's movements if you want to stick with them and keep the damage up. That said, we’ve put together a few simple and intermediate MultiVersus Batman combos below that are great for beginners to learn and practice.

Most of Batman’s extended combos come courtesy of his Batarang. You can throw it rapidly out in the middle of his jabs to stun an opponent enough to continue hitting them. At the very basic level, you should practice using it instead of the third hit in his jab sequence. This lets you perform another full jab sequence or end with an up special uppercut for solid damage. You need to start the jab combo close to your opponent to link it all.

KO Move: Down Air -> Up Special

Down Air is one of Batman’s best direct knock-out moves, but you can finish off enemies a little earlier if you practice linking it directly into an Up Special. Hit the Down Air closely with Batman’s boot and you’ll pause the opponent briefly enough for you to enter an Up Special and send them soaring even higher.

At lower percentages, you can follow Down Air with pretty much anything from Batman’s kit. Basic moves include Up Special or Up air, but try following with the jab combo above at a low percent if you can. Bear in mind that you may need to dash forward a little after using the Batarang to keep the opponent in combo range.

At medium percents, you can chain Down Air into Side Air's multi-hit attack then continue into the jab combo detailed previously. Manage to pull off this MultiVersus Batman Combo and you'll deal massive damage and apply two stacks of Weakened in one go.

That basic combo we taught you above? You can extend it even further by initiating with the first kick of Batman’s Side Aerial Attack. It’s the exact same moves you already performed, using the Batarang in the middle of the two jabs to connect them together. All you need to do is land close to your opponent with the Side Air Attack and immediately chain into the jab combo. Perform it out of your Smoke Bomb and you can strike even faster and carry your opponent further.

Feeling adventurous? The Bat-Bomb can be used to extend combos even further, detonating such that you can follow up even lengthy combos with extra hits. Here we follow the combo detailed above with an extra jump and forward air, allo enabled by activating Bat Bomb before we begin.

Don’t worry too much about landing lengthy combos like this during matches – you’ll likely only pull them off once every few of games. But putting the Bat Bomb on opponents, combo or not, creates pressure, which is where Batman excels. Stay close and aggressive and you can follow the explosion with any attack you like.

And that completes our MultiVersus Batman guide. Practice those Batman combos and you’ll force your enemies to fear the Dark Knight. Want more character tips? We have guides for Superman, Velma, and Wonder Woman as well. Read our key MultiVersus beginners tips for more general advice to get you ahead in online matches.