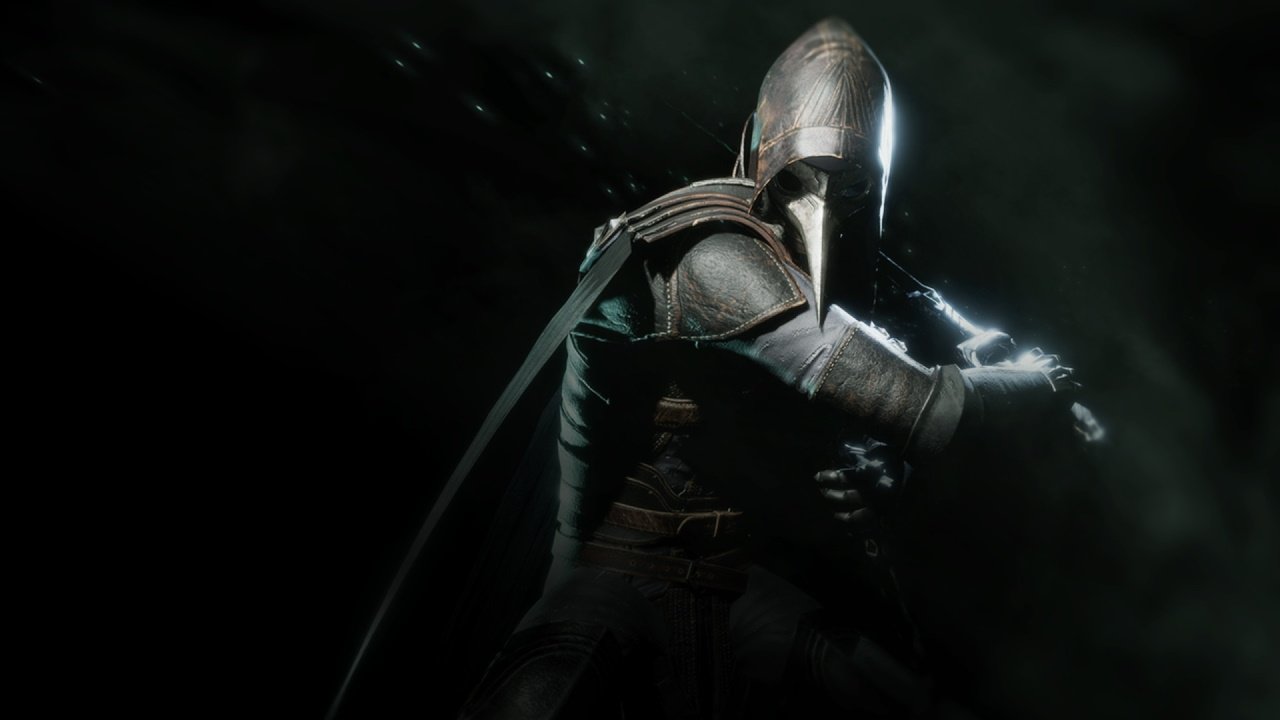 Thymesia is a game stuck in two worlds.

In one, it’s an homage, perhaps even zealous devotion, to Dark Souls developer FromSoftware’s mighty catalog. It is desperate to show how it draws inspiration. You have Bloodborne’s Victorian-gothic world, ravaged by a plague that has driven its inhabitants mad. Littered within it are greatsword- and shield-wielding knights who wouldn’t look out of place in the heights of Dark Souls 3’s Lothric. But wait! Here’s Sekiro’s parry system too, inflicting meaty damage to an enemy’s guard if you can tap along in time to their attacks. Aside from an absence of magic, Thymesia tries to do it all.

In the other world, Thymesia’s own ideas bubble to the surface, messy, frothing, and, at times, brilliant. Here, Thymesia wants to show you just how different it can be. The biggest change is that enemies come with two health bars. The first, a recharging white guard is broken by your rapid saber swings. The second – their true health – is revealed underneath, best damaged by slower claw attacks. A balance must be kept, unleashing flurries of lighter strikes before finding the opening to rend a chunk of core health with your claws.

It’s a good system, but it’s far from the only system. You’ll need to say hello to Plague weapons, too. Hit a foe with a fully charged claw and you’ll reave their attack, plundering it for a one-off power hit of your own. Steal from enough enemies and you can unlock it as a permanent and upgradable addition akin to Sekiro’s combat arts or prosthetic tools.

On top of that comes an expanded parry system. Tougher enemies and bosses occasionally throw out unblockable attacks indicated by a green glow. Dangerous, yes, but toss a feather in their face during the brief windup and you can stagger them briefly. Think Bloodborne’s pistol parries made a core necessity. But don't confuse them with red attacks, which are entirely unblockable and undodgeable. See a crimson flash and you’ll need to sprint away as quickly as you can.

It’s a lot to keep in mind, and Thymesia throws almost all of it at you within the first hour. There are simply too many ideas in play, without developing each to the degree it deserves. Expanded enemy attacks feel the weakest element by far. Feather counters become nigh on impossible  should you face multiple enemies at once, and offer little reward when you successfully hit the precise window. Red undodgeables are worse, forcing you to ditch the fight entirely for a while as you scarper to the edge of the arena.

Sadly, it’s in boss fights that the strain of all those systems begins to tell most. The style of these duals feels directly ported from the inspiring series, and not at all adapted to the mechanics introduced. You’ll rarely have time to unleash or even consider Plague weapons, and we soon found ourselves resorting to simply bashing down their entire guard bar with rapid attacks before unleashing nothing but claw strikes in each window.

There’s an overall lack of polish to presentation as well. Opening environments are a miserably murky brown despite the potential offered by a circus theme, disincentivizing exploration and discovery of the many secrets within. The absence of voice acting means cutscenes and dialogue play out entirely through subtitles, often made impossible to read mid boss-fight.

The most frustrating thing is that the core of Thymesia’s combat is extremely solid. Against regular enemies, dodging and parrying strikes as you alternate between saber and claw creates a fantastic flow. And against slower foes, seizing the chance to steal an attack and unleash it against them is immensely satisfying. When it clicks, it works brilliantly.

Upgrades are handled well too. Instead of pondering myriad indecipherable stats, your attention will be dedicated to Talents that skew your combat style, expanding the parry window or granting temporary buffs for successful dodges and counters. Thymesia insists you play in a certain way, but it lets you hone the edges of your blade to a preferred sharpness.

Overall, Thymesia feels like a game begging for focus. To pick one or two of its most interesting new systems – Plague Weapons and dual health bars – and make them the foundation upon which everything in its combat is built. Instead, we’re left with a flurry of contrasting ideas plastered on top of an amalgamation of FromSoft design. Design that doesn’t always allow room for those new systems to shine.

As a debut release by developer OverBorder, Thymesia is a solid soulslike that will test the mettle of even seasoned genre stalwarts. But there’s so much uncapitalized promise that we’re more eager to see what the team might achieve next with a sharper direction and belief in their own ideas.