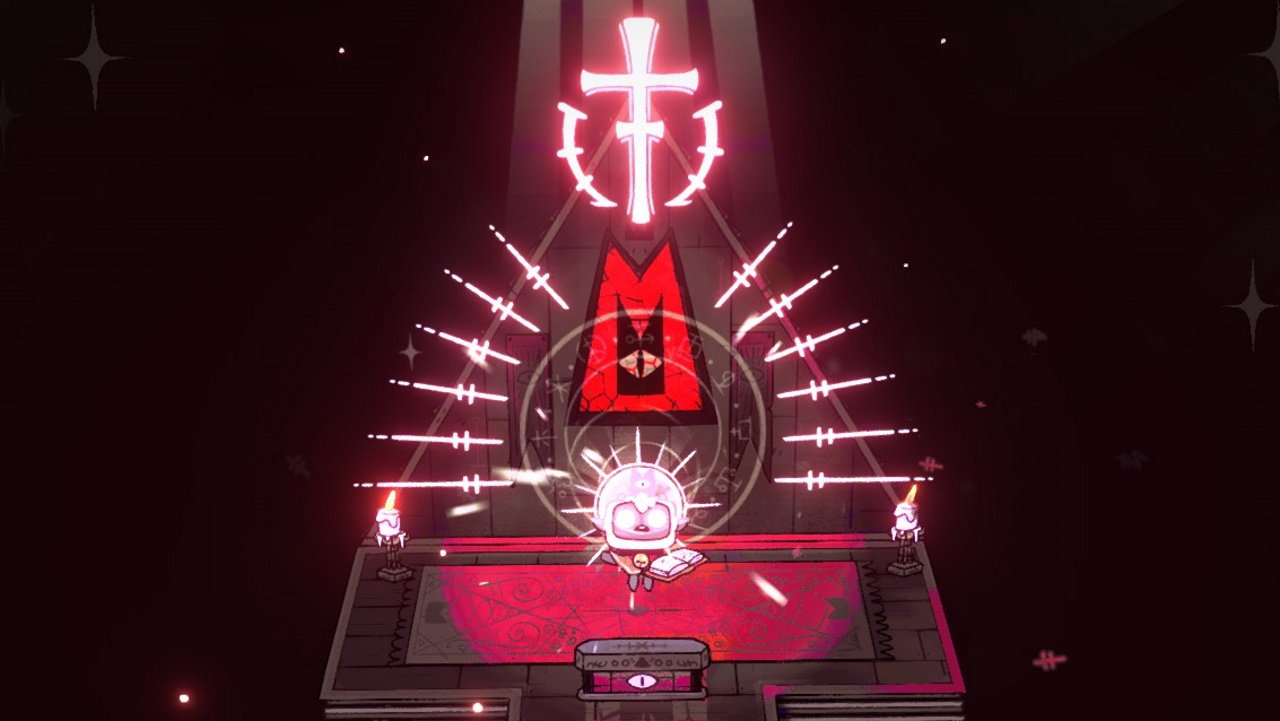 Join the cult and you can live forever. That’s the sales pitch we’d slap on the posters for Sanguine Verdict, our burgeoning home for worshippers of The One Who Waits. Take the time to read the small text, of course, and you might learn how that eternity is only achieved through your body being devoured by the group’s younger members.

Not into cannibalism? Each to their own. The good news is that in Cult of the Lamb, our system doesn’t have to be yours. As your Flock expands, you’ll have the chance to enact doctrines which define the very nature of your cult. Each selection is a simple binary choice on a given topic – one that could easily be construed as between morally good or evil options – but the order in which you unlock them leads to an entertainingly (un)natural evolution of ideology.

Here’s how it started: Older members of the cult are a burden. They shamble around, eating food and taking up precious sleeping space. Should they die, you’ll even need to research and develop dedicated burial space for them.

Those old timers, though? Also likely to be the most experienced members of your Flock. Sacrifice them to the unholy being which granted you new life and you’ll be mightily rewarded. There’s just one catch: a cult in which senior members are devoured by a giant tentacle doesn’t exactly offer great optics for newcomers. A hurdle, but one that a new doctrine or two could easily overcome.

Swap “Sacrifice” for “Ascension” and suddenly the dedication of your followers is rewarded, raising them into the light above and a final rest. The chunks of meat which fall from the sky after their disappearance? Nothing to worry about. Encourage a spot of cannibalism, in fact, and they become a bountiful reward from our benevolent deity. Eat up and you too could inherit your predecessor’s devotion!

Civilization-building games often allow the player to direct the course of their people through edicts and cultural decree. Rarely, though, do you get to see the results enacted in such direct and often entertaining ways. With feet or, er, hooves to the ground, you’ll witness the results of your magnanimous or malicious plans firsthand.

Often you’ll be the one personally enforcing them. Extorting followers for money each day is a solid source of income, yes, but can you really bring yourself to do that to Tyon the adorable red fox? If it helps, we’re sure that money would be better spent in your hands, benefiting the lives of everyone.

Selecting doctrines in Cult of the Lamb, we found ourselves weighing up not just the best gameplay benefits, but what felt right for the ridiculous convent of devil-worshiping animals we’d amassed.

Are we into resurrection or impressive funeral rights? We’ll opt for the former, as could encourage more folks to sign themselves up for sacrificial rights. Forget laboring away for eternity as a zombie when you could ascend to another realm.

Should we want to encourage interest in material benefits or an indulgence in decorations and idols? A giant statue or two does sound pretty great, just so long as it doesn’t encourage heretical worship further down the line. As leader, the choice is yours, whatever blood, blades, and tentacles that may entail.

Cult of the Lamb is available now on PS4, PS5, Xbox One, Xbox Series X/S, Nintendo Switch, and PC. If you’re just getting started, check out our 11 Cult of the Lamb beginner’s tips to construct a quality cult.