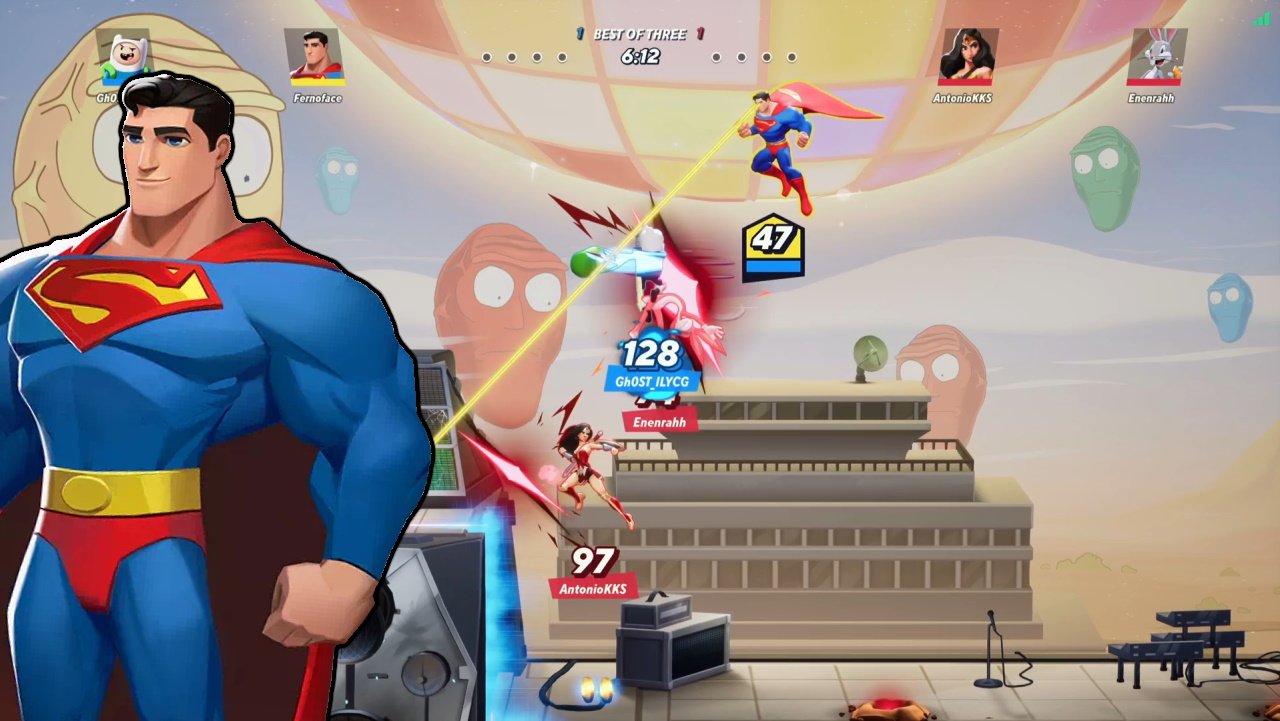 Up, up and away! That’s where you’ll be sending your opponents if you play Superman right in MultiVersus. The Man of Steel is a tank who can take a lot of damage, but his real skill is in securing outrageously early ring outs. In this MultiVersus Superman guide, we’ll take you through the key parts of the Superman moveset, list his best perks and partners, details basic Superman combos, and give you tips on how to play Superman in MultiVersus so that no one will ever mistake you for a humble bird or plane.

Superman is a Tank character, and he leans into that role aggressively through his hefty weight and the armor available on many of his basic and special moves. Superman may feel slow by default, but his unique passive ability can be utilized to maneuver him at terrifying pace across all the MultiVersus stages. Here are the key attacks in the Superman moveset:

Superman can dodge straight and diagonally upwards into the air from the ground. Invaluable for chaining combos.

On the ground, Superman charges an armored punch in a straight line ahead of him. A great tool for finishing up ground combos.

In the air, Superman delivers a flurry of punches ending in a knockback hit. A good tool for starting grounded combos as you land.

Superman delivers two punches before engaging in a rapid jab sequence. Unlike most characters, this is best canceled into other moves after the first hit. Scroll down for combo examples.

In the air, Superman delivers a rapid forward punch that can be charged.

Superman charges an overhead swing that breaks armor when charged. This is his only armor-breaking move and one of his key combo tools on the ground.

In the air, Superman swings a fist forward and down to spike opponents.

Superman breathes out a frosty cloud, applying stacks of Ice to anyone inside it. At 15 stacks, opponents will be Frozen until hit by an enemy or ally, or they mash out. This attack can be canceled faster when airborne, so try to jump directly before starting it. If you manage to freeze someone, use a charged Up Attack to deliver a killing blow.

On the ground, Superman charges a targeted punch which chases enemies within the cone. Superman has armor when unleashing the punch. The delay on the release means it’s easy to dodge when used without planning. Use this directly after hitting an attack with sideways knockback to quickly chase and follow up on an opponent.

In the air, Superman flies sideways for the duration of the move, grabbing the first opponent hit and carrying them briefly before punching them forward and up. Superman can be directed up and down during the flight. A great recovery tool.

On the ground, Superman charges a leap and dive, knocking opponents away lightly on the leap and heavily upon landing. Superman has armor during the initial leap, but loses it after that. This is one of Superman’s worst moves by far. Avoid using it while grounded.

In the air, Superman shoots upwards a short distance, grabbing the first opponent hit and throwing them above him. If the player holds a direction, Superman will throw the opponent in that direction instead.

Superman fires lasers at the ground beneath him in a forward sweep. On the ground he has armor during the attack. When used on a raised platform, Superman will fire the lasers through the platform at the ground underneath, covering much more ground. Down special is one of Superman’s most important moves, especially when used in the air.

Superman is already a heavy fighter with great survivability. But thanks to a lack of many complex combos, he benefits from buffs in certain other areas. Our best Superman perks are chosen for 2v2 battles, though they will still help in 1v1 as well.

Bear in mind that you'll need to unlock most Perks through Perk Training before you equip them. Perks should also be adjusted depending on the team you’re facing and the stage you’re playing on. We recommend swapping out Triple Jump for Armor Crush against enemies like Garnet and for Toon Elasticity on a walled stage like Scooby’s Mansion.

Ice to Beat You!

When equipped with the Ice to Beat You! Perk, Superman will work well with any ranged fighter. The best Superman partner by far, however, is Velma (check out our full Velma guide here). Not only does the bookworm come equipped with her own ice-inflicting move, she also enlarges Superman’s head (and therefore his ice breath) when she uses her down special. Alternatively, speedy characters with a few ranged moves like Harley Quinn can make great teammates. You want a partner who will get stuck in and keep enemies in your lasers or launch them into your grab attacks.

Superman is a beefy Tank, but you need to play smart to use him well. In 2v2s, let your teammates get involved first so that you can utilize your slower moves and grabs at key moments to secure early ring outs.

1. Lasers are your key combo tool

Superman’s Down Special is a crucial tool in his combos and kill setups. You’ll largely want to use this while airborne. Any opponent hit is sent flying upward in hitstun, allowing you to confirm another attack so long as you track them in the air. Above 80% or so, you can use this to combo into up air and up special for early kills.

2. Aim for early kills with grabs

Superman’s command grabs – Side Special and Up Special in the air – are exceptionally dangerous tools, capable of claiming stocks at low percentages. Don’t be afraid to go deep off the edge of the stage or up toward the blast zone when chasing opponents to use these. Your aim is to follow up on your own or your ally’s attacks, landing grabs that carry people to the edges.

A key mechanic many players aren’t aware of is that Superman can direct his Up Special throws. Grab an opponent and you can hold down or even backwards to toss them in that direction. This makes Up Special an especially deadly tool off the edge of the stage. Make opponents scared to edgeguard you by grabbing them from below and throwing them straight down. If they’re at a low percent, you can follow up with a down air to finish them off.

Check out Superman punishing Wonder Woman in this clip to get an idea of how it can work in a match:

In MultiVersus’ rapid 2v2 combat, Superman’s neutral special, Ice Breath, can feel a bit underwhelming. It doesn’t do much damage and you’ll rarely build all the way to the Frozen status at 15 stacks of Ice. But that effect is just the literal icing on the ability’s uses.

Ice Breath can block almost every projectile in the game, transforming them into ice chunks you can throw back at them. It also boosts your allies, granting them ice fists that apply Ice stacks on melee hits.

Stacks of Ice apply a movement debuff to any enemies. Reducing the movement speed of characters like Batman or Arya hurts them significantly, negating their combo potential and opening them up to hits.

On top of that, Superman’s Ice to Meet You signature perk means he deals increased damage for every stack of Ice inflicted. Pair yourself with another Ice-inflicting character like Velma and you’ll be dishing out massively increased damage just for topping up your opponent’s ice stacks every so often.

4. Use dodges to jump and chase combos

Dodging is already powerful in MultiVersus, but Superman’s are better than most. His passive allows him to dodge upwards or diagonally, and it’s far faster than jumping. As a result, he can launch enemies and chase them upwards near instantly by canceling the attack into an upward dodge.

It’s a little tricky, but get used to following your up swings with a dodge and you’ll be able to punish enemies far more at low percentages. Try practicing an up attack into an upwards dodge and then neutral air to get you started.

5. You can use Up Air to stall your recovery

As Superman, you’ll regularly find yourself off stage hunting for ring outs. If you’re recovering and low on specials, use your Up Air attack to delay your fall. It’ll allow you to drift slowly from side to side, massively slowing your descent. You’ll be vulnerable to spikes, but that’s better than dying outright.

Superman has a few crucial combos to learn, but he isn’t built around lengthy sequences that deal high damage. Many of his sequences are strings that rely on you chasing an opponent in the air or predicting their dodges. As such, bear in mind that a few of the MultiVersus Superman combos below aren’t “true” combos – they rely on adapting to your opponent’s aerial movement and decisions.

A very basic combo you should have in your toolset is Superman’s launcher into pretty much any of his aerial attacks. This works at low percentages up to around 50% or 60%+. Start with the first hit of your jab for some extra damage and an easy opener, but the key is to dodge upwards immediately after your upward attack.

When landing with either your forward air or your downward air, follow it up immediately with a neutral attack punch to chase your opponent further. Even if you whiff, the move at least has armor to protect you.

At higher percentages, you can also throw in a forward dodge after the first hit to chase your opponents further as shown above.

Lasers to pretty much anything

You should be using your down special lasers a lot as it’s one of your best combo starters. At low percentages you can follow it up into a neutral air, forward air, down air, up air, and even up special.

Above 80-90%, you should be trying to confirm this move into kills using your up air or up special. You’ll need to track the direction your opponent DIs from the hit, or just get lucky with a guess.

After something a bit more complex? Land close to your opponent with a forward air and you can chain it at low-medium percentages into a sequence of single hit Jabs (Side Attack) and Down Attacks before finishing with a neutral punch. You’ll need to be quick on the button presses to ensure you don’t leave a dodge window open.

That’s everything we can teach you in our MultiVersus Superman guide. We also have dedicated guides to Wonder Woman and Velma, along with more general tips and tricks to get you ahead in your online games!