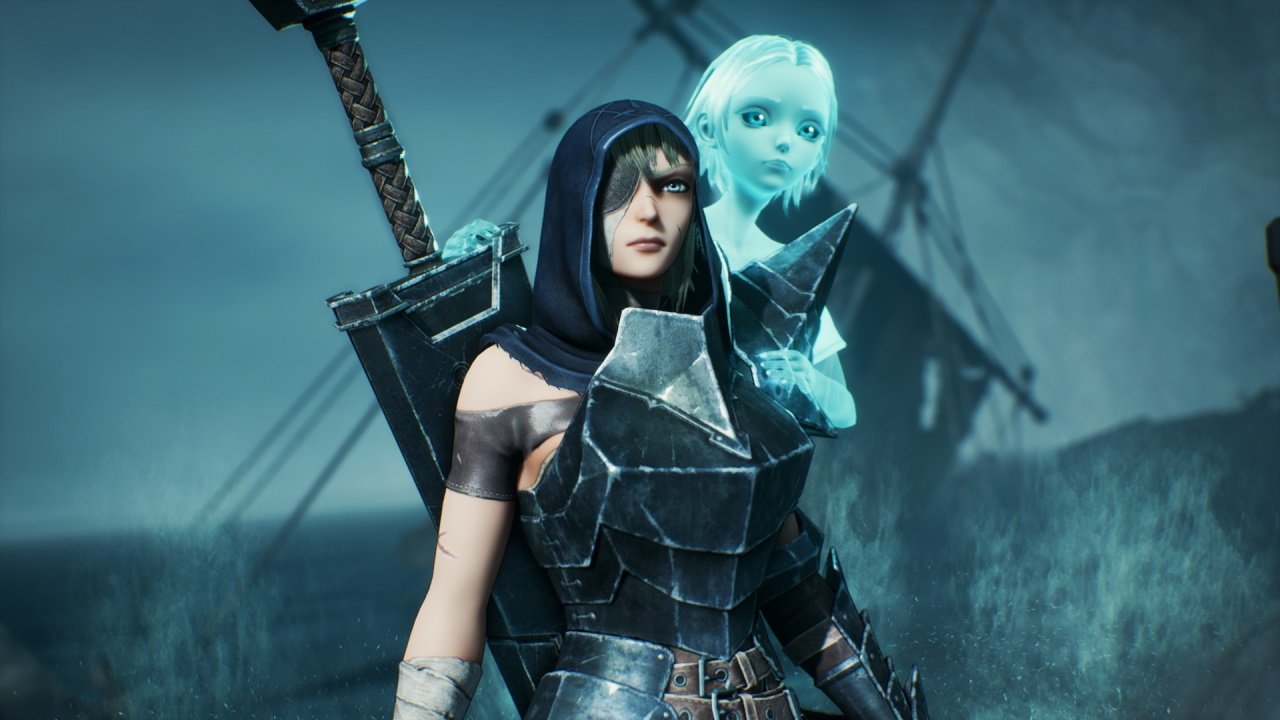 Sisters are often said to have a strong bond, but Soulstice’s Briar and Lute safely put most sibling partnerships to shame. Linked beyond death, the pair fight together as a Chimera – a hybrid warrior of human and spirit tasked with hunting down multi-dimensional wraiths in a medieval fantasy world.

In this Devil-May-Cry-style combo-chasing slash ‘em up, Briar is the weapon wielder of the pair. She’s capable of carving through monsters with her gigantic sword, hammer, fists, and a plethora of other weapons. The ethereal Lute, meanwhile, flings spells from her shoulder. Not just an extra source of damage, Lute also provides protection in the form of interrupts, slows, and deflections.

It turns out, having a magical ghost watching your back is pretty handy. While Briar focuses on dashing between enemies to deliver sweeping uppercuts and rapid slices, Lute keeps her safe from pesky projectiles and rear attacks. The trouble is, you’re in control of both of them, and managing the pair at once amid chaotic combat is far from easy.

Much like DMC or Bayonetta, Soulstice is a game about perfecting the art of combat. Fights play out in contained segments, with scores awarded for everything from a brief beatdown to a lengthy bossfight. But where Bayonetta puts the emphasis on expertly timed dodges, Soulstice demands synergy. If you want to earn those Platinum ratings, you’ll need to ensure that both Briar and Lute are working in tandem.

At its most basic, Soulstice’s combat sets spirit Lute as your defender. As monstrous enemies prepare to strike from any range, Lute can interrupt them with a tap of a button prompt. Time things right and you can chain these together, freezing or staggering multiple enemies to allow Briar a clean run of hits. Slip up and Lute will be distracted, losing focus such that enemy attacks begin to connect.

It is technically possible to focus almost entirely on the sword-swinging Briar, dodging between enemy strikes to unleash your own flurries in return. But fight with both and you’ll build up the sisters’ Unity. Substituting traditional  combo counter, Unity is a gauge of your success mid-fight. String together Briar’s hits and Lute’s counters, and it’ll build. Mistime your blocks or dodges, and it’ll drop. Sustaining Unity is key to high scores; once a certain level is achieved, the pair can unleash devastating combo attacks that cleave through multiple foes at once.

Achieving that synergy, however, is far from straightforward. There are a surprising number of mechanics to keep in mind during the frenetic fight sequences. Briar will need to alternate between standard and heavy attacks depending on the armor type of her foes, but not every enemy can be struck so cleanly.

Wraiths sit between dimensions, meaning you’ll need to activate a glowing blue field with Lute before they’re tangible enough to strike. Possessed enemies are embedded with hardened crystals, demanding Lute conjur a disrupting red field before they’re weakened enough to hit. Once both systems have been introduced, fights regularly ask you to flit between these fields almost as often as Briar does enemies, all the while blocking and interrupting with Lute’s counters. Hold either field too long, though, and Lute will Overcharge, temporarily vanishing and losing all Unity.

Balancing these combat capabilities and modes can prove seriously taxing on both hands and mind, so it’s a blessing that combos have been kept simple. You’ll only need to memorize a few attack patterns to unleash impressive sequences with each and every weapon.

When you enter a flow with the combat, fights feel exhilarating, capped off with a dramatic slow-motion zoom on the final strike. But it takes only a moment’s distraction to fall apart and find yourself utterly discordant with the game’s expectations. Death is only a minor disappointment when compared to a Bronze or Iron rating slapped atop your efforts.

There’s a solid degree of customization, too, letting you unlock new attack moves for Briar and tweak Lute’s capabilities in more offensive or defensive directions. These allow you to enhance your strengths or counter weaknesses in your style. Lute, for example, can be upgraded such that triggering her Overcharge – typically a negative effect – unleashes an extra wave of hits or slows on nearby enemies. The high skill ceiling is evident, and it’s likely that Soulstice will prove extremely rewarding for those investing time into its mechanics.

Where our time with Soulstice proved far weaker was in story and exploration. The visuals of the dark fantasy world and characters draw clear inspiration from Japanese mangas Claymore and Berserk. But while the designs look spectacular when unleashing special moves mid-combat, the tone is let down by the surrounding story. Vaguely defined threats of corruption and machinations by ominously named factions struggled to grip us when compounded by lackluster acting from the game’s supporting cast.

There are plenty of secrets hidden throughout the game’s linear environments, and you’ll want to explore to maximize resources for upgrades. But vertical platforming segments reliant on Lute’s fields proved fiddly and often frustrating. Soulstice’s use of fixed-position cameras outside of combat adds atmosphere but makes judging certain jumps and environments far more of a pain.

A few puzzles and exploration sequences aside, though, action is the core focus of Soulstice. And fortunately, there’s plenty of potential to be found there. An impressively complex combat system, combined with a distinct visual flair, make Soulstice an intriguing prospect. Fans of Devil May Cry and other combo-heavy hack-and-slash games would do well to keep Briar and Lute in their sights as Soulstice approaches release for PS5, Xbox Series X/S, and PC on September 20, 2022.