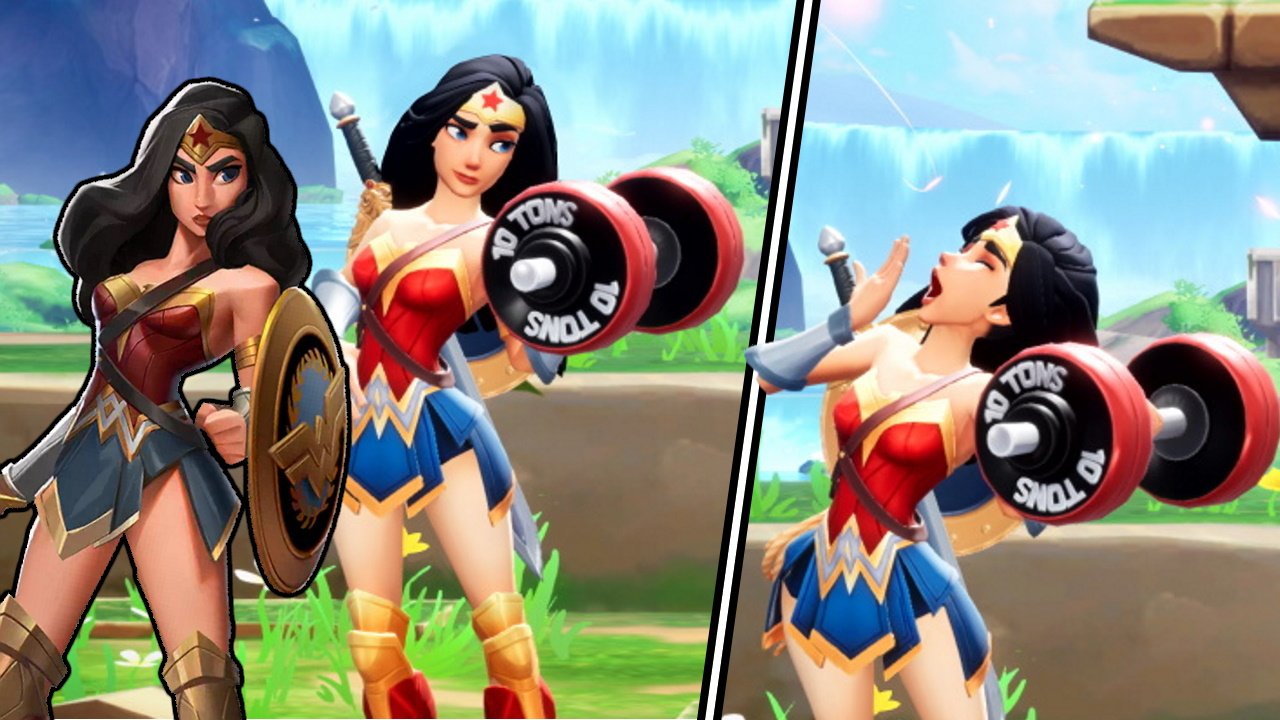 Wonder Woman is a tank who can equally work as a support in 2v2s thanks to her team-protecting moves. She has a few cooldowns to get to grips with, but is a fairly simple character to learn over all.

While not a combo-heavy character, she excels at juggling foes from underneath and her exceptional recovery tools make her a fierce fighter off the stage as well. Here are the key parts of the Wonder Woman moveset in MultiVersus:

Every time Wonder Woman blocks a projectile with her shield or takes a hit while armored, she charges her bracer meter shown underneath her character. The higher her meter, the more damage and knockback her down attack (Amazon Shout) deals.

Wonder Woman charges an expanding sphere around her. Wonder Woman When unleashed, enemies within the sphere are damaged and knocked back. Wonder Woman and any allies within range briefly gain armor during the blast. If fully charged, Wonder Woman gains armor on the last quarter of the charge.

Wonder Woman swings her foot overhead, kicking in an arc that knocks upward through most of the hit. The very end of the kick is a sweetspot which spikes down and away from Wonder Woman.

Wonder Woman throws her lasso forward, pulling any enemies and allies hit toward her. The lasso can be angled up and down when on the ground and airborne even briefly after firing, allowing you to adjust to track enemies.

Wonder Woman bursts upward, shield held overhead, knocking enemies back. If the attack is held, Wonder Woman will float slowly downwards and can glide left or right. While held, allies can stand on top of the shield.

Down Special: Defense of the Gods

Wonder Woman dashes to her ally (if in range), cleansing them and herself of debuffs and granting Shield. The Shield Status Effect removes knockback and damage from the next hit received. Wonder Woman gains Bracer Meter charge when the shield is hit.

Wonder Woman has a couple of cooldowns to work with, but you shouldn’t tool all your perks around this. She also excels at juggling, which makes her aerial capabilities worth boosting too. As such, we’ve included a mix of perks below to bring out the best in her kit.

In terms of Signature Perks, we recommend Whip of Hephaestus to add an extra kill move to her arsenal. Shield of Athena is also a solid choice against projectile characters, while Grapple of Hermes reworks her playstyle and adds an extra recovery tool. As ever, perks should be adjusted depending on your opponent. When facing an Armor-heavy character like Garnet or Superman, we highly recommend taking Armor Crush in place of one of the options below.

With that in mind, these are the best Wonder Woman perks in MultiVersus that we recommend equipping or unlocking with Perk Training:

I Dodge You Dodge We Dodge

Thanks to Wonder Woman featuring several support-style abilities, she makes for an excellent partner to almost any character. Thanks to shared reliance on cooldowns, she works well perks-wise protecting ranged fighters like Velma and Bugs Bunny. Alternatively, Wonder Woman is an excellent partner to Assassins like Finn, Harley, and Arya as her Defense of the Gods down special allows them to initiate combo sequences safely. Her Lasso of Truth can also be used in rare circumstances to rescue allies knocked off the stage edge.

Wonder Woman wants to get up close and personal with her opponents, and ideally end up underneath them for a lengthy juggle. Here are the key tips to keep in mind.

1. Use Down Special to initiate unless you need it to Cleanse

Wonder Woman’s Down Special, Defense of the Gods, grants her (and an ally) a shield which absorbs a single hit entirely. This makes it a superb initiation tool that’ll let you tank a hit to engage your opponents. You should open most matches with this to protect you and your ally.

Be aware that against enemies which apply debuffs or bombs like Harley Quinn’s you may wish to save Defense of the Gods to cleanse negative Status Effects like Weakened from you or an ally. It’s also an exceptional move to assist an ally being comboed as the shield will let them tank one hit, breaking the cycle and granting time to dodge out of the way.

2. Approach with jabs, forward air, down air, or lasso

Wonder Woman’s best tools for approaches and combo starting are her side attacks jabs (which can be canceled into a huge range of attacks – more on that later); her forward air slice which has decent range and can, at low percents, combo into jab; her down air combos at most percents into up air or up special; and her lasso grants a followup hit.

Pull an opponent with the lasso and you pretty much have free reign to follow with any attack you please. There are longer combos, but for the simplest high-damage single move, follow it up with a jumping neutral air to quickly dish out the hurt.

Wonder Womans has a relatively limited moveset and her moves include quite a bit of windup. You should spend some time learning her best kill moves to ensure you know what tools to use once your opponent gets to high percent.

Most of Wonder Woman’s kills are likely to come off the top of the stage thanks to her powerful Up Air attack and Up Special. Down Air is an effective spike, but you’ll largely be using it on stage to set up kills off the top. Her Side Special in the Air is one of her strongest kill moves and has a lasting hitbox, and you can catch opponents out by starting it high and rapidly fast falling to catch them on the ground. Use this off stage where possible to finish recovering opponents. With Whip of Hephaestus equipped, the tip of her Lasso also becomes a kill move.

As a tank, it’s your job to get hit more than your ally. This means you want to pay special attention to how your ally is doing. If you’re paired with an assassin and they’re getting beaten up, switch target to intercept their attacker. Coming in for a surprise hit also increases the chances of you landing one of your slower, heavier attacks. And if the other fighter hits you in the back? You’re tough, you can take it.

5. You can use Amazon Shout to edgeguard low opponents

Charge up your Bracers and Amazon Shout becomes an extremely powerful hit, though the activation time means you’ll rarely get the opportunity to use its full power. One niche use it to stand at the edge and charge it against opponents recovering below you. Anyone trying to spend time wall clinging will find themselves blasted out of the stage in short order.

6. Get used to prediction

Wonder Woman hits hard but she also hits slowly. Many of her moves have windup, and in her higher percentage combos you’ll need to track the direction your opponent DIs in. As such, you need to start focusing on when and where your opponent is dodging. Manage to start baiting them into dodges after certain combo strings and you can pause before following up with powerful hits like her Side Special, Neutral Air, Forward Air, or Up Air. Watch your opponent and learn what they do over the course of a match.

Much like Velma, Wonder Woman isn’t a combo-heavy character, but she does have some key sequences to practice if you want to excel. Here are the best basic Wonder Woman combos:

Jab x2 into Up Special / Up Attack / Neutral Attack

Approaching on the ground, Wonder Woman can cancel her side attack jab combo into a number of moves. Follow the first two hits with her Up Special, Up Attack, or Neutral attack for bonus damage. The Up Special does solid damage and can get your opponent into a dangerous position above you. Delay the final hit later in the round and you can bait out dodges to hit with other options as well.

Down Air into Up Special and Up Air

Wonder Woman’s down air spike is a brilliant kill move and combo starter. At low percents, follow it with her Up Special and Up Air for around 20 damage. At mid percents, swap to just up air and track their bounce.

Lasso into Down Air and Up Air / Up Special

Got your lasso charged? You can use it to initiate the down air combo above. As your opponent is pulled toward you, jump up and land a downward hit to bounce them back up again for another strike.

Beyond 130% or so, the lasso into down air will begin outright killing opponents, making it a go-to kill move if you manage to land the lasso pull.

Forward Air into jab x1 and up special

A much trickier to execute combo starts with her forward air at low percentages. Land the hit close to your grounded opponent and you can combo into the first hit of your jab and then an upwards attack. Remember to only do a single jab hit or your opponent will bounce over the leg sweep.

That’s everything for our MultiVersus Wonder Woman guide, but you can find more general tips and tricks to learn here. We also have a dedicated Velma guide, a Superman guide, and a breakdown of all the Status Effects in MultiVersus for your easy reference.