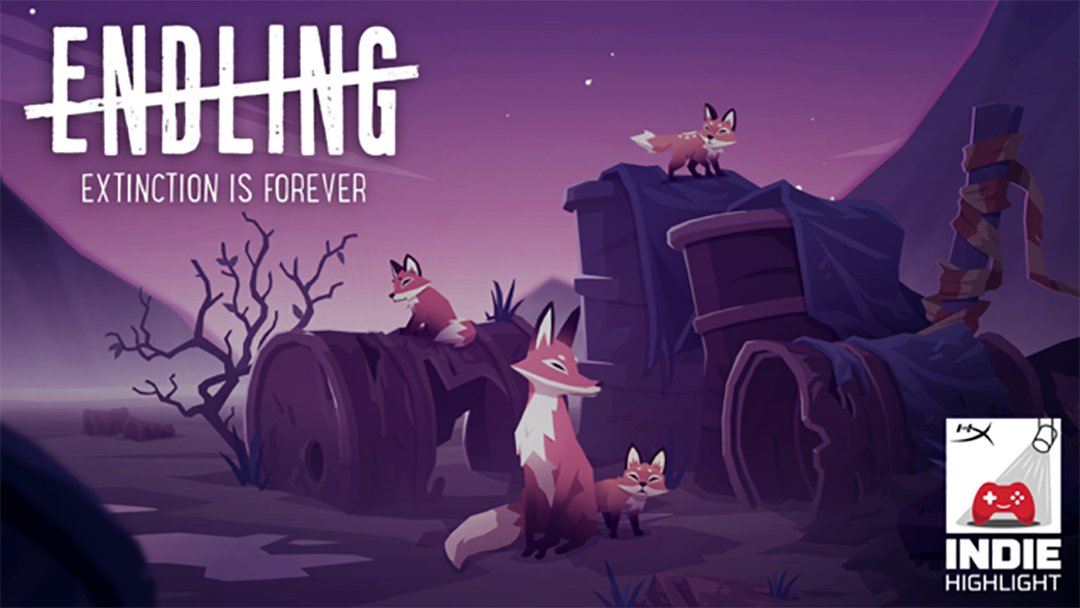 Sometimes, it’s tough to get someone to understand a different perspective until they’ve walked a mile in someone else’s shoes. In an attempt to help people understand the ecological nightmares that are unfolding as a result of human-based climate change and over-industrialization,Herobeat Studios aims to put you into the furry paws of a mother fox…specifically, the last mother fox on Earth.

In Endling – Extinction Is Forever, this month’s HyperX Indie Highlight, you’ll try and shepherd your children to safety as you try to circumvent forest fires, avoid traffic, and elude predators as you and your kits try to stave off extinction for another day. You’ll also have to get to know your individual, defenseless kits. Over time, they’ll develop personalities and fears, and these traits could lead to them getting into situations you’ll have to account for.

We reached out to the good people at Herobeat for an interview, about their motivations behind their game, their thoughts on environmental issues, and they replied from their cozy den in Barcelona, Spain.

HyperX Indie Highlight: This game looks to be simultaneously cute and dark. Some of the fates that can befall the characters in the game are quite grisly. What made you settle on using a vixen?

Herobeat: Foxes are very adaptable animals and could be present everywhere. We needed the main character to explore different environments without breaking the fantasy of being a real fox. On the other hand, foxes are both predators and prey, so this decision was enriching for the gameplay because they can hunt and there are many dangers out there for them as well. And last but not least, ¡foxes are beautiful animals!

HX: Looking the game, it appears that you wanted the game to have simple controls, but you wanted the movements to be quite high stakes. Was this always part of the game design, or was this a nuance that got iterated in later?

HB: We were committed to deliver a high production value game with a beautiful art style and carefully honed animations. We wanted to have control over everything shown in the scene, so building a side-scrolling game with simple controls was the obvious way to go for us.
However, we also wanted the narrative to revolve around environmental issues. For that reason, we really needed players to see how the world was evolving, degrading, and being destroyed by human action as the game progressed.

Making these two ideas to match looked like an impossible task. The very nature of the side-scrolling genre was playing against us, since everything the player would leave behind would be forgotten forever. There was no room to create that player-environment bond we were looking for, which is easier to achieve in open world games.

At the end we came up with the idea of mixing both concepts and developed a navigation system where you are moving on rails but at some points you can switch lanes and move to the background or foreground, allowing the player to explore a fully 3D world and remain in control of the scene composition while keeping accessible controls. After all, Endling was never conceived as a hardcore skill-based game.

HX: When did you first entertain the idea of creating a game to speak to environmental issues?

HB: Back in 2017, my colleague Pablo Hernández and I were having a coffee and talking about the kind of games we would like to work on in the future.

We had been developing video games for years, but always felt that we were missing the opportunity to deliver a meaningful message and use this medium to reach young audiences that, just like us, were worried about the climate crisis and how next generations will have to deal with the consequences of the present acts.
Knowing that we were so aligned we just had to take a step forward, to quit our jobs and invest our life savings into creating Endling, our first title as studio.

HX: Without pulling back the curtain too much, what are some of the conversations you hope that your game will spark?

HB: We believe that the more immersed you are into the narrative, the more committed you are when it comes the time to reflect about the questions we raise through the game. We don't want to break this immersion with value judgments about player’s decisions. Instead of moralizing, we want people to focus on enjoying the gameplay mechanics and the message will eventually hit the player.

With Endling we are just presenting a feasible future situation based on scientific predictions and then we let the player go through the experience.

HX: Extinction is forever, but if you could magically bring back one species from extinction, what species would it be?

HB: Might be handy to keep that in our back pocket, just in case we humans need it sometime soon!

Oof, that’s a chilling prospect to consider! We’d like to thank Herobeat for taking the time out of their busy schedule to discuss their labor of love with us. It’s not every day you see a developer pouring not only their heart and soul, but their life savings into a project.Endling – Extinction is Forever is currently available on Steam, PlayStation, Xbox, Switch, and the Epic Games Store.