Learn how to play with cross-platform friends with our MultiVersus crossplay guide! 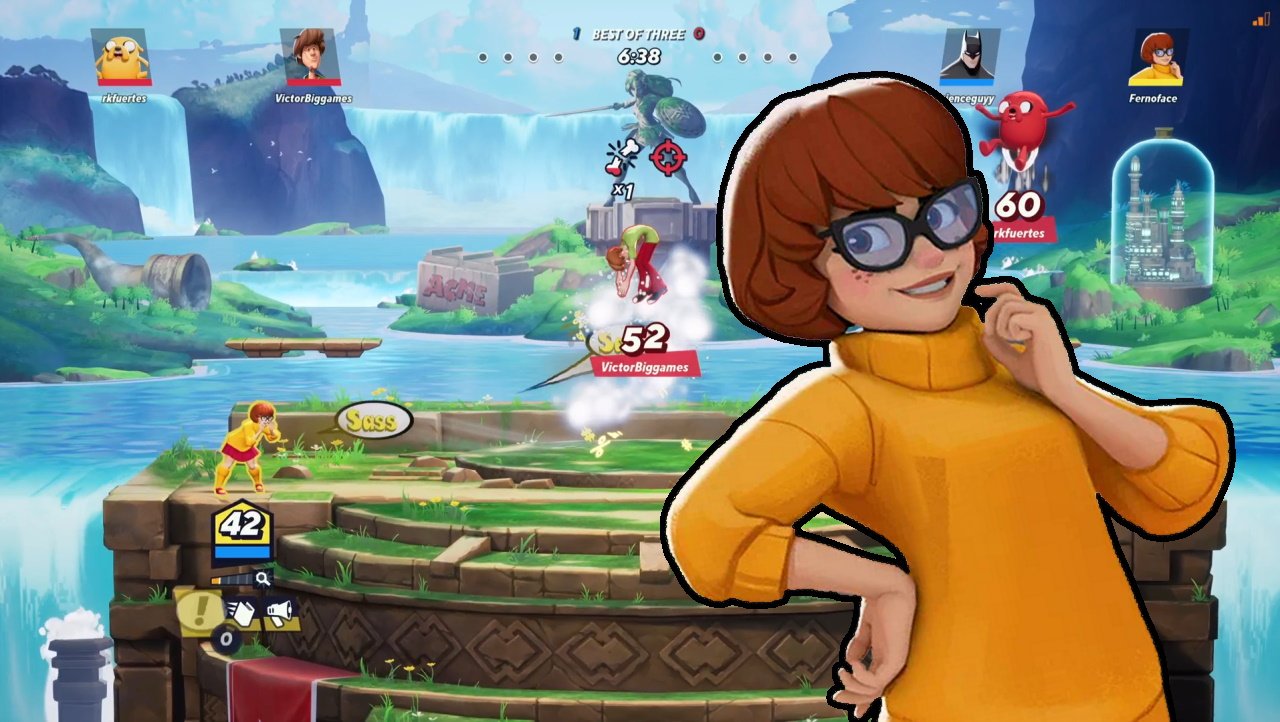 The EVO 2022 games you should be watching this weekend.

Velma may be a bookworm, but she’s no slouch on the MultiVersus battlefield either. A dedicated support character, the Scooby-Doo star excels in team fights with a deadly ally. In this MultiVersus Velma guide, we’ll take you through the Velma moveset, explain her ideal partners and perks, and give you tips on how to play Velma in MultiVersus so you can investigate your way to victory.

Velma is a dedicated support character, with several moves that buff or utilize teammates. As such, she excels in 2v2 fights, though it is possible to use her well in 1v1 matches as well. Here are how her key and special moves break down:

During matches with Velma, Evidence will spawn periodically and from certain attacks. Velma and her ally can pick up Evidence to fill her Evidence Meter. Evidence disappears after a while if uncollected.

When her Evidence meter is full, Velma can use Down Special while grounded to summon a police car. The car will target the nearest enemy, driving to pick them up before carrying them off the stage. The enemy and their ally can attack the car to destroy it, and the captured player can struggle to escape.

Velma fires a speech box which travels straight forward. The first attack marks enemies or allies such that further fired bubbles will lock onto the same target. Speech bubbles hurt enemies or, if they hit an ally, heal Velma and spawn a second bubble.

Velma fires a narrow beam projectile which repeatedly hits enemies and heals allies. The beam can be aimed up and down. If the final hit hits an enemy it will knock them back and apply the Weakened status effect. If the final hit is on an ally it will spawn a stronger beam from her ally. This beam can also be aimed by Velma. The beam will mark enemies for her word bubbles

Velma charges a forward sprint, grabbing enemies in her path or allowing allies to hop into her arms. Enemies will be thrown upward at the end if grabbed, while allies will grant increased damage and armor to the sprint.

If grounded, Velma spills toxic goop on the ground and jumps upward. The goop builds up stacks of Ice on enemies that stand in it. If in the air, Velma takes a photograph downward, launching her upwards slightly. The photograph attack has Armor Break and can spawn evidence.

Down Special: Spread the Knowledge

Velma fires a homing projectile which tracks her ally. Velma is granted the Educated buff when firing, and her ally receives it if the projectile hits. This reduces the length of all cooldowns while active. You’ll know it’s active because of the massive head on your shoulders

Crouch movement: Velma can also move while crouching! Do this online and you’ll see the screen blur after she takes off her glasses. Not very useful, but a fun nod to her source material!

Despite being a support, Velma effectively acts as a Mage/Ranged fighter, relying largely on projectiles. In addition, many of her attacks have cooldowns, including her neutral attack, neutral special, down special, and up special. As such, she benefits most from perks which reduce cooldowns and buff her projectiles.

It's worth noting that perks are always variably from match to match depending on your teammate and opponent. If you're teamed with Superman, for example, we highly recommend taking Ice to Beat You for the combo effect. Against Armor-heavy characters like Garnet, take Armor Crush.

With that in mind, here are three core perks we recommend using Perk Training on to obtain.

As Velma is a ranged character with a lot of cooldowns, she excels when partnered with a Tank character who can keep the enemy off her or protect her from aggressive assassins. Wonder Woman is a superb Partner for Velma as her Cooldown reduction will greatly benefit her and you’re likely to stack perks too. Brawlers like Superman and Shaggy, or tougher assassins like Batman also make for great partners, but be aware that Assassins with rapid movement are much tougher for Velma’s projectiles to target. Superman also has a unique combo with Velma. Her down special's Educated buff will enlarge his head, making his Ice Breath attack even larger.

Velma is built around her projectiles, cooldown abilities, and ally boosts. As such, she’s far less of a combo machine than many characters on this list. Here are the key Velma tips and tricks you can use to outclass the opposition.

1. Start every match with Down Special

Using Down Special (Spread the Knowledge) at the opening of a match will grant you and your ally an immediate cooldown buff, allowing you to unleash your specials and word bubbles far more effectively. Follow it up with Neutral Special or attacks to make use of the buff immediately, but watch out for speedy enemies rushing you down.

2. Use Neutral Special to snipe enemies off stage and delay mid-air

Motivational Speaker is one of Velma’s most powerful tools, capable of dealing damage, debuffing enemies, and boosting allies. The cooldown is short, and you’ll be using this a lot in the middle of fights. Mostly you should prioritize hitting your ally with the final part of the beam.

Its best use, however, is to snipe enemies knocked off the stage. When an opponent is over the edge. Get close to it and use this to land an extra hit that can KO them or force an awkward air dodge. Practice your aim and this will become your go-to ring-out move.

In addition you can use Neutral Special to pause Velma in mid-air. This makes it a great tool to avoid juggles or chases at high damage percentages, but be careful that your opponents don’t cotton on and become more aggressive.

3. Make use of your pokes

Velma isn’t a brawler, but she has a good number of disjointed attacks that are a pain for melee fighters to deal with. Her basic side attack string (Quip Master) spawns disjointed speech bubbles, as does her charged down attack.

Her grounded up attack and up air attack both spawn a disjointed light bulb which attacks will struggle to reach through. Use these and her torch flash forward air attack to keep enemies at bay.

4. Stay distant and force enemies to come to you

Because of the pokes described above, Velma is a pain to approach. She’s less effective on the offensive, so stick away from your opponents and force them to come to you through a wall of projectiles and attacks.

Using her Down Special to coat the floor when someone approaches will also punish them for sticking near to you and mean they need to risk being frozen. Be wary of speedy, sword-wielded aerial based assassins like Arya and Finn.

5. Learn her Evidence attacks and summon the Police in safety

Several of Velma’s attacks can or will spawn Evidence. These are primarily down attack, up attack, forward air attack, neutral special, and up aerial special. Building these into your regular combos (especially forward air and down attack) will see you steadily build up Evidence to charge your Police summon (5 pieces are required by default). Don’t forget to collect Evidence when you have the breathing room to do so.

When your meter is charged, wait until you have an opening before using the meter. The Police car pauses for a short duration after being summoned, leaving it vulnerable to an aggressive opponent. Knock your enemy back or wait for them to move toward your ally before using it. When the police car grabs an enemy, focus on double-teaming their ally to knock them back and stop them from destroying the car.

Velma has limited upward mobility and attacking potential, which makes her especially vulnerable to spikes off stage. As such, try to angle upwards when receiving sideways knockback. You can use her aerial side special

Velma isn’t a combo-heavy character, but there are a few basic attack strings you’ll want to use on the regular.

Down air into up attack / up air.

When approaching from above, Velma’s Down Air will launch grounded or airborne opponents off the floor, allowing for an easy follow up with an up air or up attack at low percentages.

Side attack x2 into down attack (plus Down Special)

A basic combo for Velma is to land two hits of her side attack before canceling it into a down attack. Hit the attacks quickly and your opponent won’t be able to dodge and you’ll get a guaranteed Evidence spawn. You can follow this up with a down special if available (and your opponent doesn’t dodge) or with a side or neutral special if your opponent dodges towards or away from you.

Kill move: Side attack x2 into up attack

When hitting up close, Velma can cancel her side attack combo into an up attack. This will KO most characters off the top above 140%, making it one of your guaranteed kill options at high percentages. Practice this in The Lab so you can always pull it off when needed during a match.

Piller combo: Down air into up special (repeated)

One of Velma's strongest combos is the ability to pillar opponents up and down off the floor using her down air and up special. Alternate between the two after hiting an opponent on the ground and you'll bounce them over and over, dealing upward of 50 damage at best. Just cycle between down air and up special while sliding left and right to track them. It takes a little practice to get the timing in The Lab, but this will be an invaluable sequence in your matches once you get it down.

That’s all the advice we have in our MultiVersus Velma guide, but you can check out more general tips and tricks for the game here! And to make sure you’re at the top of your game, we also have guides for Superman and Wonder Woman, as well as a full list of Status effects in MultiVersus for you to check through.