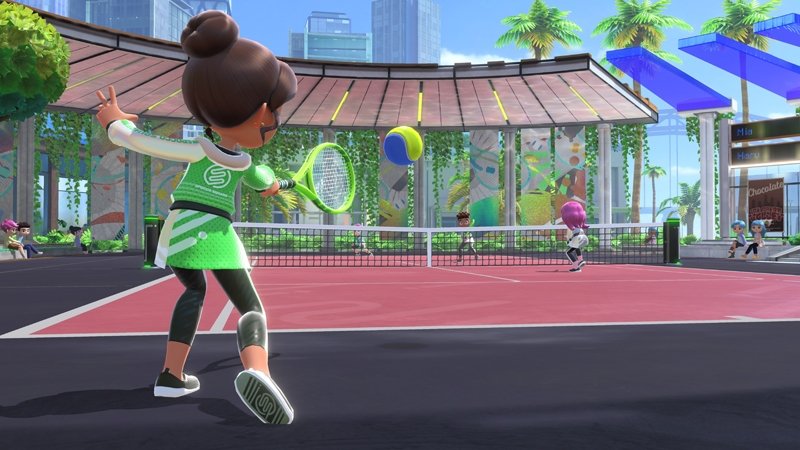 The grass has been covered up once more for its year-long R&R, and Djokovic has claimed yet another trophy title. Grass-court tennis has left us once again. But if you’re missing Wimbledon as much as we are, you can keep that satisfying sound of ball-meeting-racket alive in your home thanks to these excellent tennis games. Whether you prefer to serve aces with a swing or the tap of a button, these are the best tennis games for those missing Wimbledon already.

The best tennis games for those missing Wimbledon

Now, video games – even the VR ones – don’t exactly convey the full experience of tennis, so we haven’t restricted ourselves purely to realistic Tennis sims. Instead, these are the best tennis games of all forms, even if you aren’t actually playing tennis in them! As such, we’ve included a Serve Score rating to let you know how accurately it captures the feel of smacking the ball in a beautiful arc that barely grazes the baseline.

After its glory days in Wii Sports, humble tennis has been overshadowed somewhat by newcomers like Volleyball and Soccer in Nintendo Switch Sports. But don’t let the swinging swords of Chambara distract you forever, because Switch Sports tennis is a brilliant revitalization of the Wii’s motion-controlled classic.

With Joy-Cons in hand, you’re able to unleash an impressive range of shot types, adding curve and spin to the ball by twisting your wrist with each strike. Online limits you to brief bouts, but if you play with friends in the same room you can settle in for a lengthier match as well. Plus, if you get tired, you can always relax with a round of bowling.

What it’s available on: Nintendo Switch

Serve Score: 4/5 balls – You’ll be physically swinging with each and every shot, but you can do so from the comfort of your couch.

A lot of tennis fans won’t like Mario Tennis Aces. That’s because it is, in many ways, closer to a fighting game than a sports one. As the ball pings back and forth across the net, players need to not just position well, but also counter shot types, unleash zone shots, and defend with well-timed trick shots. You can even slow down time to reach distant balls – a skill all but necessary when your rival unleashes their character’s special shot to the other side of the court.

It’s a confusing experience to witness for the first time, especially for tennis purists. But if you and another friend do click with the core systems, Mario Tennis Aces will smash a wealth of competitive depth into your shared court. The game proved popular enough to receive a healthy dose of post-launch content, serving up new characters and extra single-player challenges to tackle.

What it’s available on: Nintendo Switch

Serve Score: 2/5 balls – The rackets, net, and balls are there, but we don’t remember the last time Nadal slowed down time before backflipping across the court for a winner.

WHAT THE GOLF? Special Event

It's time for Wimblegolf! Putt your way to glory in this special event where the court hits the fairway.

Seriously, a golf game? If you’re asking that question, you’re probably not aware that What the Golf? is about as far removed from the sport in its name as an ankylosaurus is from a modern-day sparrow. The game has you putting anything from people to houses around “courses” in miniature levels that are part puzzle, part joke, and always great fun. All well and good, but where exactly does tennis come into things? Well, developer Triband Games updated the tiny title with a special Wimbledon-themed pack of levels on Apple Arcade. It’s only available for a very limited time, but we’re hopeful it’ll return again in future.

Okay, so we’re cheating the description of “currently available” a little here, but you should probably expect that from a Bowser main. If you’re lucky enough to still have a GameCube and a few controllers kicking about, Mario Power Tennis remains not just the best Mario Tennis game out there, but one of the best Tennis games period.

Whether you’re playing with power shots enabled or not, the pace of the ball and skills required to hit forehand winners, curving slices, and looping lobs is perfectly pitched. It’s an experience that Mario Tennis Aces just can’t quite measure up to. Double matches allow the varied roster to truly come alive, and there are even entertaining gimmick stages to shake up the usual structure. Two Mario Tennis games in the list is a little cheeky, but it’s consistently one of the best Mario spin-off series.

What it’s available on: Nintendo GameCube

Serve Score: 3/5 balls – Switch off power shots and ignore the fact that you’re playing as a ghost or acrobatic monkey and Mario Power Tennis makes for a seriously satisfying tennis sim.

Before you toss your [insert reading device of choice] out of the window for our sacrilegious inclusion of a table, you really should give Eleven Table Tennis a go. For VR owners, it’s easily one of the most accurate physics realizations of the real-world activity. Given most of us don’t have room in our homes to be sprinting across a virtual tennis court, compacting the same general motions to the more reasonable size of a ping-pong table just makes sense. Eleven Table Tennis is fairly barebones when it comes to single-player functionality, but hop online with a friend and you can lose hours to rallies in miniature.

What it’s available on: PC and Oculus VR

Serve Score: 4/5 balls – An impeccable recreation of table tennis in VR. If it wasn’t for that pesky table we’d be seeing top marks.

If you are desperate for a VR take on the full shebang, here’s First Person Tennis: The Real Tennis Simulator. This work-in-progress title by Mikori Games includes both arcade and simulation settings that’ll adjust just how accurate your swings will need to be to return the ball properly. If you’re picking the latter, expect to find yourself missing or smacking the ball skyward an awful lot until you get into the – forgive us – swing of things. First Person Tennis has been receiving plenty of updates from its developer to fix bugs and improve the physics, but expect to still face a few bugs here and there.

What it’s available on: PC and Oculus VR

Serve Score: 5/5 balls – It’s tennis, but where you don’t actually have to run for any of the balls. Marvelous.

What are your go-to best tennis games? Let us know down in the comments below.