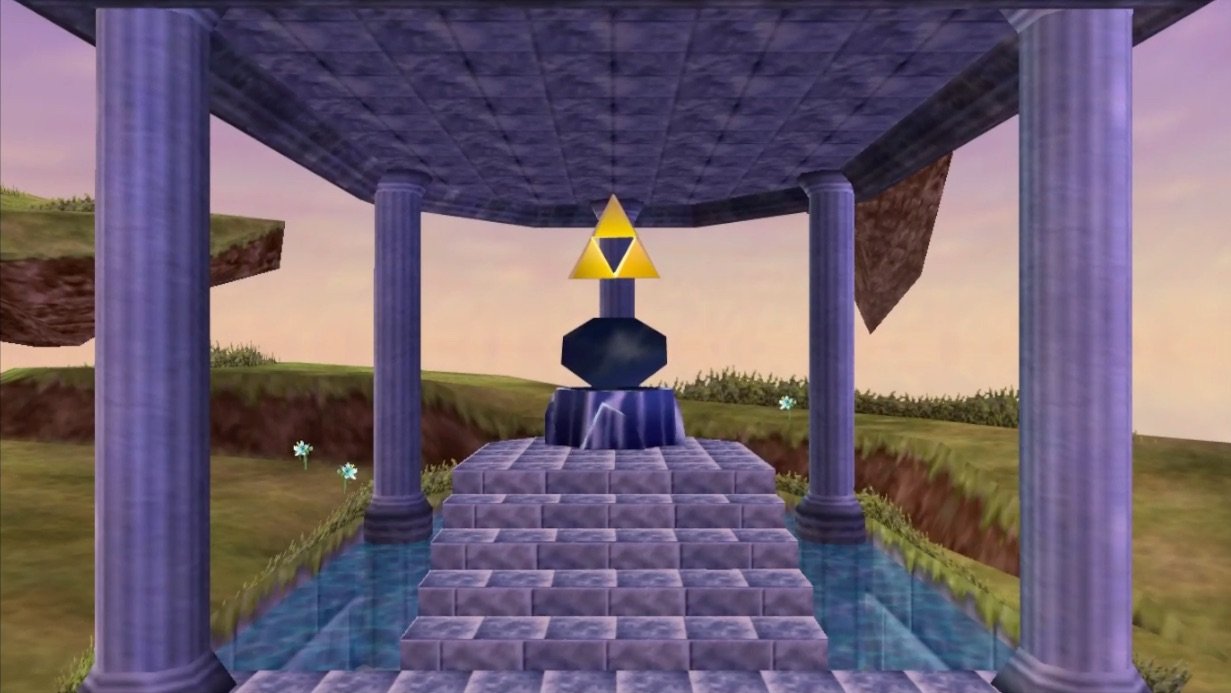 If you weren't chilling out with the best runs of the SGDQ finale last weekend then you missed out on something very, very special.

Not quite a speedrun (in a way you might be familiar with) but still extremely enjoyable, the Zelda Ocarina of Time beta showcase was a bonus game added to the schedule by donations from the community.

An hour long, the showcase used some very technical manipulations of a standard Ocarina of Time cartridge in a factory issue Nintendo 64 console to do some fantastical things. Here are some of the wonderful secrets we learned about in the SGDQ Ocarina of Time beta showcase run.

In 2019, members of the very large – and very dedicated – OoT community discovered assets and code on the retail cartridge relating to a much talked about beta version of the iconic game. This pre-release version had been shown off at Nintendo's Space World conference in 1997 and then hinted at after the game arrived (in a much changed state) in titillating forum posts from pseudonymous strangers.

The differences between promotional footage and screenshots floating around various forums and gaming mags fuelled rumors about hidden or cut content for decades. How do you melt the ice in Zora's Domain? Could you get over the fence behind the windmill in Kakariko village? Was this going to be unlocked when the Nintendo 64 DD came out? Rumors that persist to this day were confirmed, denied or made even more confusing after the discovery of this treasure trove of beta content hidden on the very carts we had first played on over 20 years ago.

As evidenced by the beta showcase run at SGDQ 2022, members of the team cracking into these bits of code to piece together the puzzle were hard at work sifting fact from fiction. In November 2019, shortly after the beta dump was discovered, Sauraen, Savestate, DwangoAC, Terusthebird and Rebeccaetripp started assembling assets and their relationships into a scenario that could feasibly explain what content it was intended to create in a final version of the game that was chopped down by Nintendo's developers.

But getting that scenario to appear on a screen was the real magic.

The SGDQ beta showcase run starts off with a setup many who are familiar with Ocarina of Time speedruns will recognize: arbitrary code execution. By tricking the game into rewriting its own memory, players can execute instructions on the game cartridge using Link's co-ordinates and positioning to overwrite values. The beta showcase team figured they could use this to repurpose assets already on the cartridge, like the cut beta content, and patch them into their intended purposes.

However, using arbitrary code execution is hard enough, there are dozens and dozens of very precise inputs just to do something simple like skip straight to the credits in an any% run. Using it to rewrite and code missing portions of the game would require thousands, hundreds of thousands of inputs.

In the end it was 2 million. So they enlisted TASbot, the Tool-Assisted Speedrun robot that pretends to be a controller and spams thousands of inputs a second into the N64's controller ports. After it was done basically rewriting the entire game, runner Savestate took over to guide us through a partial history tour, partially imagined scenario that shows what might have become of our childhood rumors.

The first revelation of the cut beta content is that there was a sort of item trading side quest, similar or in parallel to the Biggoron Sword trading quest. In fact it used the same item, a magic powder made from crushed up mushrooms. But to get it, you had to do quite a complicated secret code. In the original Zelda for the NES, the path through the Lost Woods was North, West, South, West. Perhaps as an Easter Egg, Ocarina's developers put in a secret where if you got kicked out of the Lost Woods four times in that pattern, it would unlock...something.

This may have been cut as the secret unlocked chime gives you absolutely no clue as to what exactly you've unlocked, leading to confusion for genuinely lost beta testers. The pattern makes a Kokiri child appear in one of the Lost Woods rooms, which the beta showcase team has coded using the original beta model of a Kokiri. They ask you for a butterfly, another cut item which could be caught in a bottle, or bought from the bomb shop guy in Hyrule Castle Town as long as you've spoken to this Kokiri.

Presenting the butterfly will earn you a trade for the Magic Powder, which can then be given to the Skull Kid who says he will now upgrade any of your masks. This mechanic appears to have been cut from the game to be expanded in the next game, Majora's Mask, as many of the masks have their effects from that game. The Bunny Hood when upgraded gives you increased running speed, but the Gerudo Mask upgraded is even more convincing a disguise, allowing you to get into Gerudo Valley as a child and talk to Nabooru.

Being able to talk to Nabooru as a child would allow her to teach you the second half of the Song of Time – an incredibly difficult to perform song input with sharps and flats that required the use of the analogue stick, which was left in just for fun. This "complete" song would allow you to travel back and forth in time without going back to the Temple of Time and placing or removing the Master Sword from its plinth.

This would have factored into the original design for the Spirit Temple in the desert, which was to be completed by switching back and forth through time, between child and adult Link, instead of completing one half as one Link and then going back and switching over. It's likely this was removed from the game because being able to change time whenever you felt like it had disastrous ramifications for the design of every other area in the game, and someone just didn't want to deal with that can of worms. It did lead to one fun sidequest interaction though.

Most people will remember that the Running Man of Hyrule Field is chilling in a tent at Gerudo Valley as adult Link. He has a little challenge for you to beat him to the bridge to Kokiri Village, but even if you run in front of him the whole way, he always beats you there by one second after the load zone. Infuriating.

Well, with the full Song of Time you could simply begin the challenge, go back in time, travel to the finish line and then become an adult, thus beating him by negative seven years (or something, we're bad at math). Unfortunately, despite him pretending to have been bested by you and humbly offering a reward, the Running Man is royally pissed at you cheating to win and begins a fight with some of the funniest (and toughest) attacks in the game.

Once defeated, he gives you your real reward: a Sage's locket that someone fleeing the castle dropped which doubles your magic meter, handy! It's one of many cut items, including the Sage's medallions, which used to be equippable.

Each of the six temples (for six Sages) would earn you a medallion when you completed them, and still do in the final game. But in rumors posted online and screenshots in gaming mags, it appeared at some point you could equip these medallions to the C buttons to use them.

Of course that was true at one point, with medallions like the Fire Temple Medallion giving you the same power as Din's Fire. These spells were simply repurposed into other items (Nayru's Love and Farore's Wind) but the medallion version of Din's Fire had one advantage over its final version.

As an adult, even after completing the Water Temple, Zora's Domain remains frozen, so you can never sink beneath the water's surface to explore. As a child you can only dive deep enough to get through the shortcut door to the Lost Woods. But if you used the Fire Temple Medallion as an adult you could melt the ice and then use the Iron Boots to get into a secret grotto: The Unicorn Fountain.

In here a beta model of the Great Fairy grants you the Sage's Wisdom, allowing you to unlock the final door in the Temple of Time. If you play the Song of Time at the plinth with the master sword in it, the doorway to the Sacred Realm will open, and you can finally retrieve the Triforce.

Most of this scenario is creative stitching together of odd leftovers found in the beta dump, but the ending of the SGDQ 2022 beta showcase is extremely special. Using nothing but the arbitrary code execution through controller inputs, the team behind the run put together a playable Sacred Realm section, a cute joke with Sheik and the final retrieval of the Triforce after two decades of rumors. But after that, they even include an in-engine flash forward to Breath of the Wild, along with integration of chat messages piped through live from the SGDQ Twitch channel, TASbot firing it all into the console through controller ports 2 through 4. It's really astounding stuff, and somehow emotional? Maybe that was just us, but it's a perfect ending to another GDQ marathon.