Look out PUBG, there’s a new go-to game on Twitch. 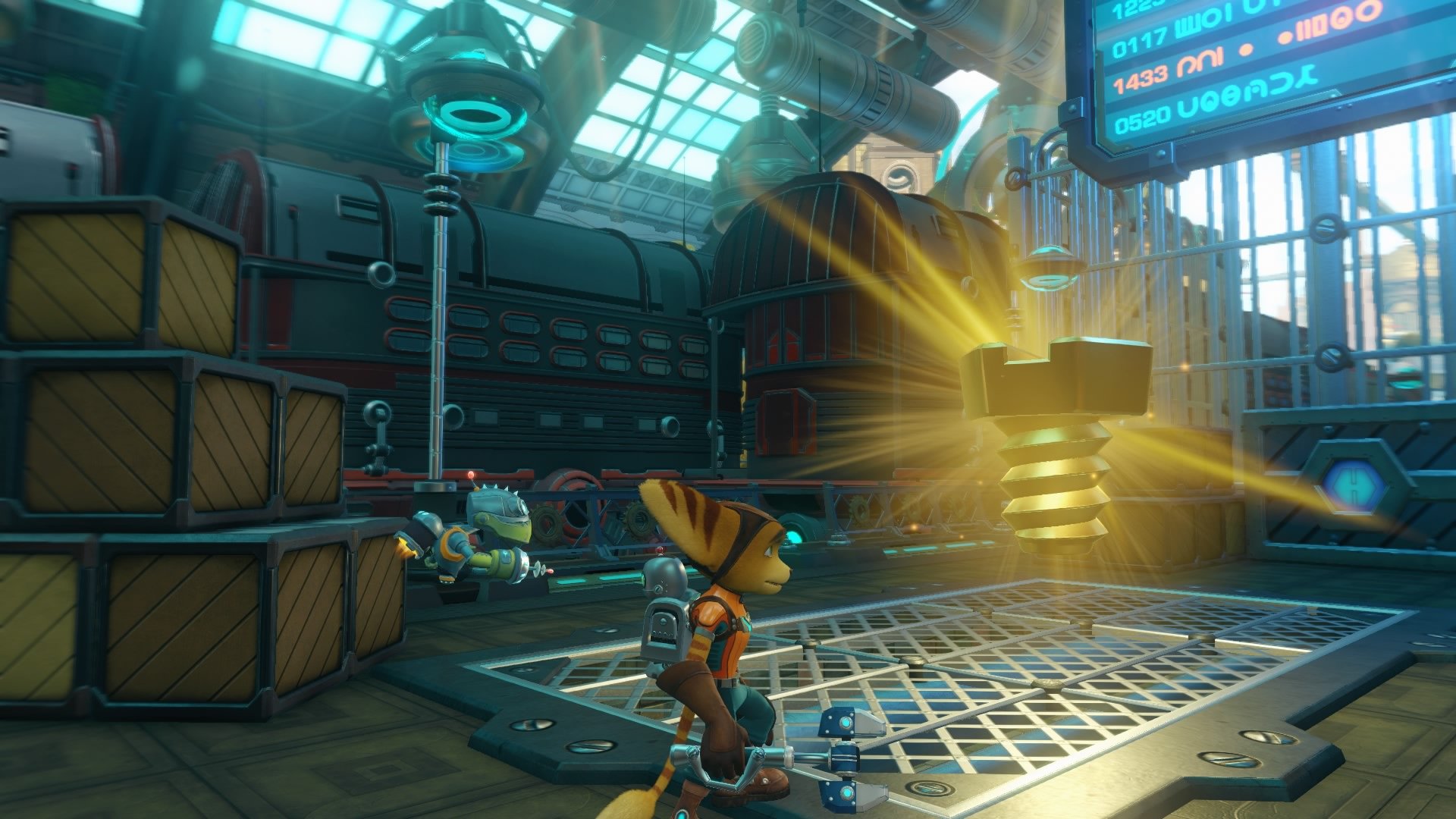 It’s a $375 mystery box featuring Inside, Limbo, and the possibility of something sexual.

There are 28 gold bolts to find in the PS4 remake of Ratchet and Clank, and once you get them all you'll earn yourself the Ultimate Explorer trophy and a bunch of menu options. Finding every gold bolt in the game unlocks fun cheats and alternative costumes for Ratchet and Clank, and allows you to check out other areas of the Insomniac Museum, a nice monument to the game's developer.

If you want to find all 28 gold bolts, we've listed the locations of all of them planet by planet here, along with maps and helpful screenshots to give you a hand. To see which gold bolts you're missing, select a planet on the galactic map and it will tell you how many gold bolts you've collected there. Check out the hints below to find the gold bolts you haven't added to your collection yet.

Just to the right of your garage there's a Magnestrip. Go for a walk up it once you've got your Magneboots and you'll find this planet's sole gold bolt. Done.

The first gold bolt is in the Grav-Train station, use your high jump to get on top of the crates on the platform to the right of where you come in (the one with white arrows pointing up hints at where to start). From there you can long jump to the high wall of crates and then drop down the other side to find a gold bolt and a Qwark statue hanging out together.

The second gold bolt is just sitting there on the third island tower in Qwark's fitness course thing. Can't get much easier than that.

Your first gold bolt location on Aridia is near the starting area, hug the right wall and at some point you'll spot it lurking behind a grate that you can't blast open. Luckily if you keep following the wall there is a bit of it that you can blast open, so do that and retrieve your prize from inside.

The next gold bolt is in the room where you get the Hydrodisplacer. Drain the pool and head down to the platform with a crank on it, but before turning that bolt, check out the water below you. You can dive down to a gold bolt right at the bottom, but be careful not to swim into the huge fan below it.

Once you've got the Magneboots and Thrusterpack, you can come back to Aridia and head to the campsite (using the teleporter next to your ship to save time). Walk up the very obvious Magnestrip and use the controls up there to move the cranes. Once they're in place you can then lasso your way across the swamp onto that small island, where you'll find the gold bolt in the back of a dumptruck.

The first gold bolt on Rilgar is in the maze of forcefields. Even when you turn them all off, there's still a small square in the corner stopping you from getting to the gold bolt. Instead of smashing into it over and over, go outside the maze to find a tall advertising board which you can hop onto, then hop onto the top of the maze beams. Walk across to the corner and drop in for your prize.

The next bolt is actually on the hoverboard course itself. The second turn has a ramp to take you to a higher path, where if you stay on long enough you'll find a gold bolt hanging out in a boost ring.

Once you've got your scuba mask, head back to the sewers and jump into this pool near the start. There's a tunnel under the water which, after you've swum up it long enough, lets out into a room with a gold bolt in it.

The Nebula's sole gold bolt is in a cage with a bunch of Swarmers. Just before you get to the Snagglebeast arena, there's a round room full of cells. On the upper right-hand side one of these cells heads into a small room full of the little ankle-biters. Dispatch them and grab the booty.

Required equipment: The jetpack from the end of the level

You can roam around with the jetpack once you've got it, so just complete the level as normal until then. Once you have it, head to the area where you receive the Grindboots and fly up to the Magnestrip on the side of a chimney. Walk along that, avoiding all the fire, and turn the crank at the end. Head inside and hit the three pads in succession to lower the forcefield on this gold bolt, which you can then find right next to your ship.

There's a double platform to the south-west of the map with a lot of enemies all over it. Deal with them first and then hit all 3 Tri-Pads before the time's up, it's easiest to start from the top of the building and work down to the bottom two. Then the forcefield will deactivate and you can grab the gold bolt.

On the opposite side of the map in the north-east, there's a small platform with a ring in the middle. The gold bolt's hovering in the middle of it so just glide yourself in and snatch it up.

Way over to the west there's this long, thin strip of land which has an area in-between its cliffs that you can jetpack into. The gold bolt is at the lower end of the slope.

First one's a total gimme: instead of going through this big door, walljump up the conveniently spaced columns either side of the door and get onto the roof for your prize.

Your next gold bolt is after you've extended your first bridge to continue. Once over it, head up some small cliffs to the right and then jump across some islands to find the bolt around a corner.

The last is on the ramparts of Fort Krontos, but to get up there you'll need to head inside the courtyard and jump up this large stack of boxes. Once you're on the ramparts run all the way around and you'll be able to claim your prize.

The first gold bolt on Pokitaru is in the water near where you arrive. There's a small island with two palm trees in sight of your ship, and after swimming out to it you'll be able to see an arch under the water. Under the arch is the booty you seek. It can be a tough dive without the O2 rebreather but you can do it with some skill, if not come back once you've finished the level.

While escorting the guy, you'll come along a path with a waterfall flowing across it and the next skiff you need to take at the end. Instead of getting on the skiff to continue, you'll be able to see a small island with high cliff walls across the water. Swim out to it and scale the east side of the island to jump up to where the bolt is.

The last gold bolt is a reward for completing the optional mission to get to the top of the waterfall. To get there, jump into the water where the first skiff docks and follow the cliff on your left to find a cave. Head in, being careful not to set off all the mines, and continue along the path inside to reach the top. You'll have to fight another Telepathopus but will be rewarded with a gold bolt for your victory.

Be on the lookout in the Clank section of this level when Zed locks himself inside a crate. As you enter this room, take a left and you'll be able to see it hiding behind a vent grill. Go grab a series of bots until you can place a bridgebot across to the bottom of the vent and then a springbot at the end of the bridge. Then you'll need to go grab a bomb from the last room to jump up and smash the vent grate. Then you can hop inside and grab the gold bolt.

As Ratchet, in the Warbot production line room, up in the south-west corner, there's a Tresspasser puzzle to solve to open a door to the gold bolt. Solve it and you'll be able to glide out across the molten steel to the bolt once the door opens.

On the west side of the Warbot production line room, there's a doorway that doesn't take you through to where the vendor is. Hit the button on the central column to drop the forcefield and let you fly through this small tunnel with the gold bolt inside.

After using the Thrusterbolt to spin the room around, go to head back and you'll see the gold bolt on a ledge to the right. You can get there a few ways, but double jumping and then gliding works most of the time. DO NOT TOUCH THAT GRINDRAIL FIRST, it's impossible to come back so you'll have to do the whole level again just to get to here.

Another hoverboard track, another hidden gold bolt. This one requires you to take two shortcuts in one lap, as you first have to take this thin high road by boosting and holding jump for as long as possible off this ramp. Stay on the track and it'll unlock a forcefield on the tunnel to the finish line which has the golden bolt in it.

This last gold bolt on Kalebo is on the grindrail section. It's pretty annoying. You need to hit these four buttons to unlock the path to the gold bolt, which will require you jumping off onto this optional looping section and avoiding trains and everything else. It's really annoying, but once you've done it you're pretty much finished.

On your first visit to the Deplanetizer, head to Drek's office (the room with planet holograms everywhere), stand by the Trespasser pad and look for a button on the right side of the wall. Hit it with a weapon and climb the ladder that drops down. Just a little bit of platforming from there gets you this gold bolt.

And on your second visit to the Deplanetizer, head to this room with two Drek statues. There's a couple of crates with blue lights that will help you climb a ladder onto this platform. From there you can see the gold bolt and you just have to jump across a couple more platforms to claim it. That's your last one! Congratulations!