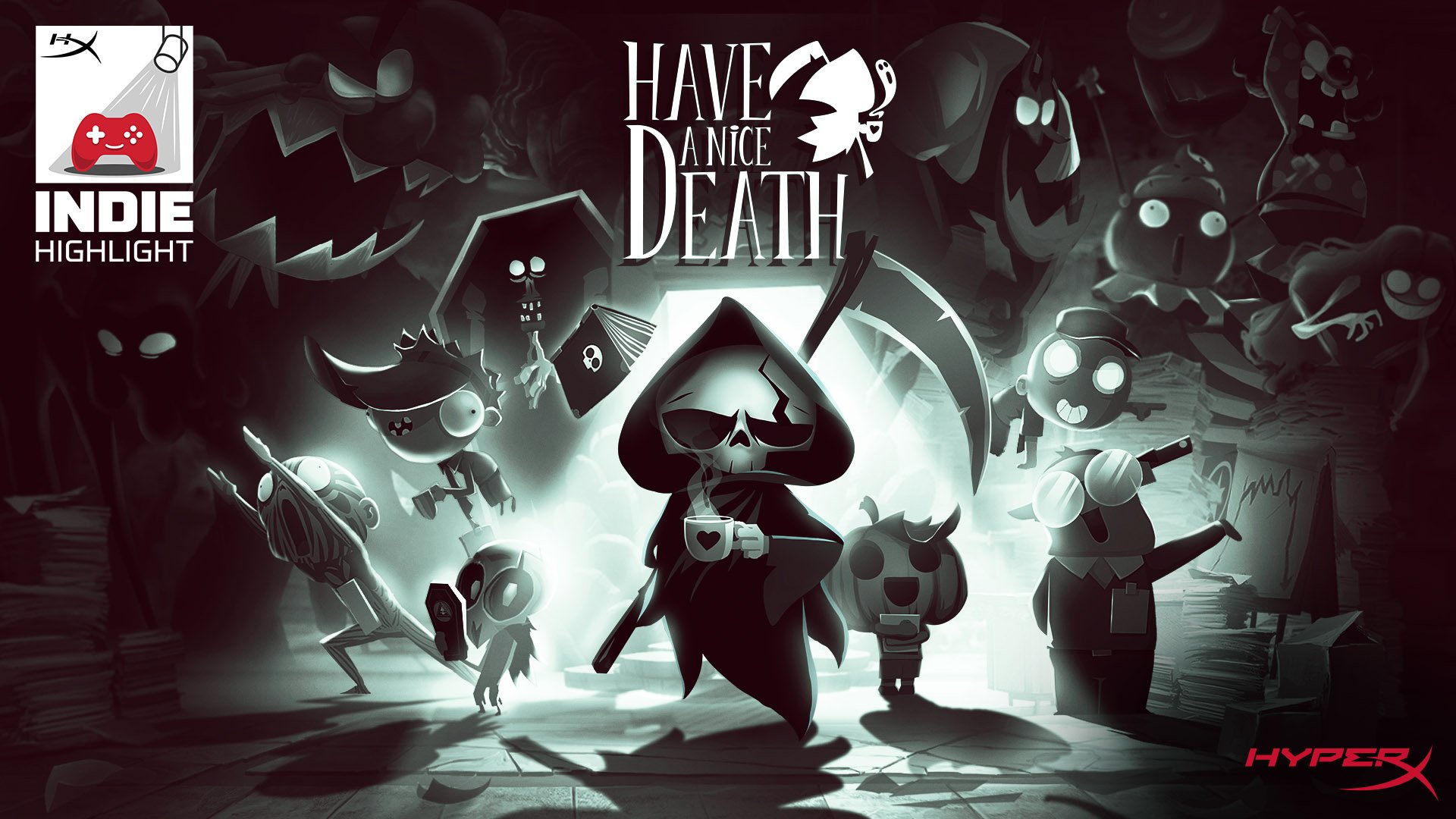 “You can rest when you’re dead.” Or so the old saying goes. But what this month’s HyperX Indie Highlight presupposes is, what if you couldn’t? Magic Design Studios’ morbidly themed action-roguelite, Have A Nice Death puts you in the role of Death, the CEO of Death, Incorporated. Unfortunately for our fateful protagonist, business is booming a bit too well.

Buried under towering mounds of paperwork, Death reaches his breaking point. They decide that they’ve had enough and set out to rein in the Sorrows, underlings who are wreaking havoc on earth – and on Death’s work/afterlife balance. In order to secure yourself a much-needed vacation, you’ll have to reassert your authority as CEO by jumping, dashing, and scything your way through the underworld. The game is currently out in Early Access on Steam, with a roadmap listing major content updates throughout 2022.

We dashed an email off to Montpellier, France to get in touch with the good folks at Magic Design Studios – a fairly young studio that boasts of an office fish on the staff roster on their website – and pick their brains about their entertaining bit of gaming gallows humor. Marketing Coordinator and Narrative Designer, Meredith Alfroy and Lead Game Designer, Simon Dutertrewere kind enough to provide their answers to our questions.

Magic Design was founded over five years ago, and your team has experience on working in the AAA space and the Indie space. What’s the company’s origin story?

Yes, Magic Design Studios was originally established in 2015 by Yang Lu, Nicolas Leger, and Bruno Gentile, former artists at Ubisoft. After years of experience in AAA, the trio set out to build a company focused on creating high-quality entertainment. To begin this new adventure, Yang wanted to create a game inspired by the Chinese novel, Journey to the West. Additional members joined them to form a core team. The first project – Unruly Heroes – became more ambitious and the team grew larger. The game was released in 2019 and won an Annie Award for best character animation in a video game and was critically acclaimed by media and players alike.  Now our team is working on this brand-new content for our game, Have a Nice Death (HAND).

So, how exactly did you come up with the idea to make a game about Death being overworked?

During a team meeting for Unruly Heroes, Nicolas Leger – Creative Director and Lead Animator on HAND – scribbled a little sketch of Death because he had always been fascinated with the macabre and the allegorical representation of death. This sparked a conversation about what it would be like if Death were in charge of the afterlife and worked in a traditional office. With everything that’s been going on in the world, he would probably be pretty busy processing paperwork for incoming souls and in desperate need of a vacation. The team thought this unique take on death would make an incredible setting for a video game.

The game is also a commentary on modern corporate culture and the futility of trying to maintain a healthy work-life balance.  In Have a Nice Death, we try to explore all facets of office culture, from dealing with difficult employees to the more mundane tasks like loading up on coffee and powering through a mountain of paperwork.

For a game that’s about the underworld and death, there are a lot of very creative and vibrant visuals. Who came up with the concept for the visual style, and what are some of your touchpoints?

One of our pillars for the game is immersion. Our goal is to create a strong and iconic universe, a mix between gothic, spooky-dreamlike, original but not too much as we wanted it to remind us of real life in a regular company. All of that is represented in a cartoonish art style.

The art of HAND comes from Nicolas’ limitless imagination, with help from Concept Artist Christophe Messier. The team was fascinated by Nico's art and the universe he could offer. His art style was inspired by The Nightmare Before Christmas and the overall imagery (color range, graphism, photography) in Tim Burton's animated movies. He was also inspired by Gustave Doré and Japanese anime studios like Miyazaki, Studio 4c, and Gainax (FLCL).

But the final product is a result of brainstorming and collaboration between Magic Design’s hubs: game design, narrative design and art.

We particularly enjoyed the mini-bosses being called Thanagers (Thanos + manager). Who’s your favorite?

[Mérédith] Probably Candice because the animation/character design is so hilarious, the game pattern requires good reflexes, and Julien – Lead Sound Designer – invited me to do the voice of this character, which was really fun to do.

[Simon] Will Hung. Mostly from a practical point of view. Since we went with ropes that come from outside the screen, if I want to create more attack patterns, it is quite easy!

Roguelikes and rogue-lites are having a bit of a moment right now. Any thoughts on why you think gamers are finding this style of game so appealing?

[Simon] The roguelike/lite genre mostly comes from the indie game sphere. Most of the time this leads to games that are more innovative, original, and freer in art style and game design that you won’t necessarily find in AAA games.

Also, roguelikes and roguelites offer an extended experience and pushes the player to become better and more competitive. Roguelike are games designed with two elements in mind: timeframe and mastery. A player that starts playing roguelikes know that a run will only last a short time and it will challenge them to improve.

[Mérédith] In Have a Nice Death, we’ve incorporated all of the mechanics that gamers already love about rogue-lites but put our own twist on the genre with fast-paced hack’n’scythe combat in a unique, hand-drawn corporate setting that’s rarely been explored in video games.

Have you come up with a name for the office fish yet?

I’m afraid that the fish has gone in peace. He supported our team during Unruly Heroes production and will never be forgotten.

Hopefully the late Magic Design Studios support fish will end up being memorialized somewhere at Death Inc’s offices. See if you spot it anywhere when Have A Nice Death scythes its way out of Early Access sometime soon.