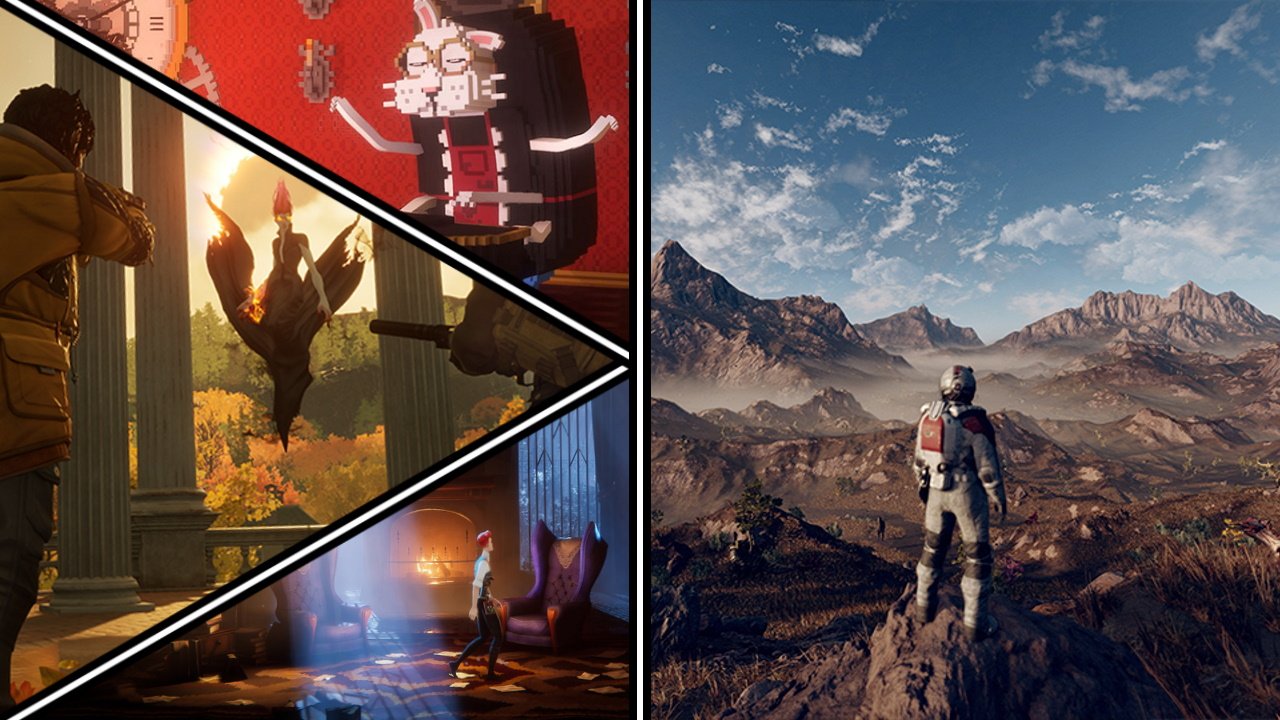 The biggest trailers and news from the Xbox + Bethesda Games Showcase

Just as delays had begun to make the upcoming Xbox calendar look a little slim, Summer Game Fest arrived with the Xbox + Bethesda Games Showcase. The lengthy hour-and-a-half broadcast delivered a dump truck of upcoming titles and major announcements, the vast majority of which will be arriving on Game Pass at release.

Missed the show? Don’t worry. We’ve rounded up the biggest game trailers and news from the Xbox + Bethesda Showcase below so you can easily catch up on the major announcements.

The show opened with our first look at Arkane’s co-op vampire shooter in action. Vamps might be tough, but they’re no match for a shotgun with a strapped-on stake bayonet. Left 4 Dead fans should definitely take note.

The new trailer gave us a look at the game’s lead four characters: Jacob Boyer, a crack shot capable of turning invisible; Remy de la Rosa, an engineer who can deploy a small (and unexpectedly adorable) robot ally; Devinder Crousley, a crypto-zoologist with access to a wealth of unusual gadgets; and Layla Ellison, a telekinetic medium who can unleash powers like warding off bullets with a giant ethereal umbrella.

Riot is bringing its catalog to Game Pass

One of the biggest surprises of the night was that Riot Games will be bringing its full catalog of titles – that includes League of Legends, Valorant, and Legends of Runeterra – to Game Pass. Subscribers will get access to all available Champions and Agents in each game without any need for unlocks in the future either. More information on the partnership is promised in the coming months.

If there was one game we weren’t expecting to see during the Xbox + Bethesda Showcase, it was Hollow Knight: Silksong. The bad news? There still isn’t a release date or window for the metroidvania sequel.

The next trailer for Asobo Studio’s rat-ridden sequel gives us another look at lead protagonists Amicia and Hugo, with the former seemingly on the hunt for a way to heal her younger brother from the Macula curse which allows him to control the rat plague. Amicia appears to be dealing with the moral ramifications of her growing capabilities as a killer – skills which Hugo is none too fond of.

Another unexpected appearance during the Xbox + Bethesda show was the next video game born from the mind of Rick and Morty creator Justin Roiland. It’s a sci-fi shooter in which your arsenal of weapons all seem to have quirky personalities and aren’t afraid to show them by nattering at you. The trailer wasn’t shying away from the Rick and Morty influences at all, with Roiland providing a voice over that might as well have been from Morty himself. It could be brilliantly hilarious or endlessly irritating.

Forza Motorsport is back and Horizon gets Hot Wheels

The Forza Horizon series pretty much snatched the stage from its original racing series, then used it to throw a wild party filled with a cacophony of colors and cars. At long last, the technical racer is returning, this time promising dynamic time of day with weather progression, full damage models, and ray-tracing on track. One for hardcore racers with an Xbox Series X.

The Forza news didn’t end there, as we got confirmation of the previously leaked Hot Wheels DLC for Forza Horizon 5. Everything goes a little Trackmania in the trailer, with cars zooming around loops built atop volcanoes.

Overwatch 2 is coming in October

Overwatch 2 has been in an odd limbo of semi-sequel ever since its first announcement, but the Xbox + Bethesda Games Showcase has finally shown us when it’s coming and what shape it'll take. We now know the game is coming later this year, and we also got a look at a new character, the Junker Queen.

A brand new title from Ashes of the Singularity developer Oxide Games, Ara: History Untold is a turn-based grand strategy game in the Civilization vein. There aren’t many details available just yet, but it appears to be focussing on the chance to create an alternate history for the world as you lead empires and civilizations through multiple ages. It’s coming to Steam and Game Pass.

Minecraft continues its forays into alternate genres with the announcement of action-strategy game Minecraft Legends. As the Piglins threaten to corrupt the Overworld, it’s your job to create alliances and lead the land’s people into battle to defend their home from the Nether.

Lightyear Frontier is a farming sim with giant mech suits

What have the likes of Harvest Moon and Stardew Valley always been lacking? According to Lightyear Frontier, the answer is giant mechs. Crash landing on an alien planet, you and your friends can start a new life by hoovering up resources, setting up a farm, and helping the produce grow. The world has its own mysteries to uncover, assuming you can tear yourself away from planting alien wheat for a few hours.

Dive into memories with The Last Case of Benedict Fox

A would-be detective bound to a demon? Crumbling mansions made from the minds of the deceased? There was plenty to intrigue us about The Last Case of Benedict Fox, a new indie 2D metroidvania game by developer Plot Twist. With the help of the demon companion bound to his body, Benedict Fox can dive into Limbo, a world formed from the consciousness of the dead. Delving into the dead’s minds isn’t just for fun, of course. Fox is aiming to discover what led to the untimely deaths of a family.

Pentiment is a visually distinct medieval tale from Obsidian

Medieval settings in games usually offer up knights and archers battling over piles of bodies. Pentiment, a new narrative tale from Obsidian, is anything but that. Inspired by illuminated manuscripts and woodcut prints, Pentiment follows journeyman artist Andreas Maler in 16th century (so slightly post-medieval – don’t judge us too harshly) Bavaria “during a time of great social unrest.”

One of the biggest games to get a look in during the Xbox + Bethesda Games Showcase was Diablo 4. Our first sequence of gameplay reveals a much grimmer and far less colorful world than Diablo 3. Fear not, there are still plenty of enemies to mulch through! The developer spotlight showed off extensive character customization, cross-play support, and PvP zones.

Ravenlok is a beautiful indie action-adventure

There were several indie highlights in the show, and Ravenlok was up there with the prettiest of them. It’s uniquely blocky art style comes courtesy of Echo Generation developer Cococucumber. The story follows a young girl who tumbles through a magical mirror and finds herself fending off the Caterpillar Queen’s assault on a fantasy kingdom.

Explore worlds within worlds in the next indie game from Jeppe Carlsen, lead gameplay designer of Limbo and Inside. Top-down 3D exploration spreads across lush landscapes and dry deserts as you hop between worlds to solve a cosmic mystery.

A new action game from Team Ninja, Wo Long: Fallen Dynasty promises a dark fantasy take on the Later Han Dynasty of Chinese history. Demons have overrun the land, leaving the player to fight them and soldiers with a mix of martial arts styles. Coming from producers who worked on Bloodborne and Nioh, there’s plenty of potential here.

The Persona series comes to the Xbox ecosystem this year, kicking off with Persona 5 Royal in October. That’ll be followed by Persona 4 and Persona 3 Portable down the line, with all of them releasing on Xbox Series X/S, Xbox One, and PC.

Hideo Kojima dropped in during the broadcast to reveal plans for an Xbox-exclusive game from Kojima Productions. We don’t know anything much about the game just yet, besides the fact that it will leverage cloud technology in some way. Don’t worry, PlayStation fans, this partnership doesn’t mean Kojima Productions won’t be working with Sony as well down the line.

Saving the big one for the end, the Xbox + Bethesda Games Showcase concluded with a first proper look at Starfield, the new sci-fi RPG from The Elder Scrolls developer Bethesda. The gameplay demo begins rather tepid, showing a uninteresting gray moon and gunplay against generic suited goons. Thankfully things pick up with the reveal of extensive ship customization, free-flight, and an absolutely massive universe with 100 systems and 1000 planets to explore. This is going to be a big one.

What was your favorite part of the Xbox + Bethesda Games Showcase? Let us know in the comments below. Check out our Summer Games Fest roundup to see all the new games announced during the opening broadcast.