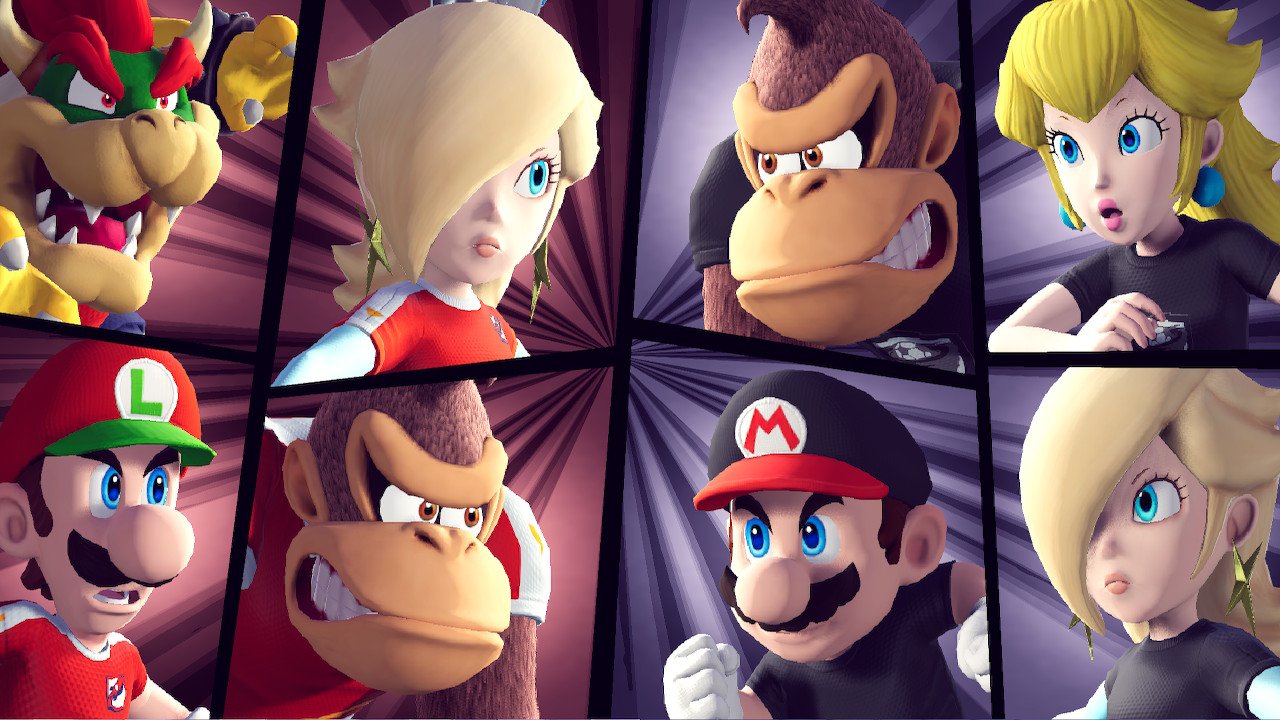 Mario Strikers: Battle League looks set for fierce competition, if you can conquer the chaos

Dungarees dumped in favor of a slick orange kit, Mario lifts his boot, lining up the perfect shot to arc the ball over the goalie and into the back of the net. The angle is perfect. Or it would have been, if our favorite plumber hadn’t been slammed face-first into the dirt by Bowser’s spiny shell. The crowd erupts anyway.

Mario Strikers: Battle League isn’t a game about playing fair. It isn’t even a game about playing soccer. Not really, anyway. It’s the concept of the sport, delivered with as much chaos and disregard for the rules as you might expect were a gorilla, fire-breathing turtle, and dinosaur tossed onto the pitch. Handball? Forget about it. In Mario Strikers, any and every limb is fair game for shooting, passing, and flattening the opposition.

With only two previous iterations, the Mario Strikers series never quite established the same lineage as Golf or Tennis. But that didn’t stop the GameCube original and its Wii sequel from amassing a dedicated fanbase of footie fanatics. Arriving 15 years later, Battle League has a lot to live up to. We got an early taste of the game thanks to this weekend’s First Kick demo, and it left us equally excited and terrified by the complexity and chaos on display.

One run through the Battle League tutorial and you’ll understand what we mean. With two types of pass, through shots, perfect moves, angled shooting, Hyper Strikes, and more, there is a lot of depth to Mario Strikers: Battle League. But that complexity comes at the cost of the simple, easy-to-learn standard set by most Mario Sports titles.

A pitch in pandemonium

Last year’s Mario Golf Super Rush had plenty of complexity stashed within its caddy bag, but the fundamentals were simple enough for anyone to get to grips with. Mario Strikers: Battle League makes no such concessions. This is a trial by fire – one in which even the tutorial’s CPU enemies will be happy to scorch you. To succeed here, you’re going to need to learn a lot of inputs fast and not mess them up on the fly.

Compounding that difficulty of entry is the sheer bedlam of on-screen action. Before you can master Battle League, you first need to comprehend it. Eight characters (plus goalies) are crammed onto a tiny pitch, with the ball pinging to and fro as effects and items fly in all directions. Things are constantly hectic. It’s extremely easy to lose track of not just the ball, but even which character you’re controlling. And a moment’s disorientation is all that’s needed for your opponents to slot a shot into your goal.

It’s an issue exacerbated online by unhelpful player markers which fail to clearly identify you over anyone else. With dedicated characters in the game’s final four-on-four matches, this is likely to be less of an issue, but the two-on-two showdowns here could do with a serious clarity overhaul.

It took us around three online games to finally click with Mario Strikers: Battle League. But once we did? We found plenty to pull us back for more. Get to grips and the initial commotion gives way to a game of rapidfire positioning, passing and displacement.

It’s here that the character stats begin to shine. Manipulate your opponent’s defenses and you can open space for slower shooters like Bowser to unleash near-guaranteed strikes. Prefer speed? Peach or Toad can outpace anyone else on the field, pulling defenders after them before crossing to an ally. Even the items are tactical. Rewarded any time a player is tackled off the ball, they’re best held for protection, gaining you those extra seconds needed to unleash a Hyper Strike.

The Hyper Strikes – supercharged shots which pause the action briefly for a stylish cutscene – feel like a refinement of the Wii predecessor’s equivalent. Grab a powerup orb then secure just a little more time than a standard charge shot demands and you have the chance to net two points. If your timing on the Hyper Strike’s swinging bars is perfect, that is. Mess up and your opponents can mash to attempt a save.

Even if the shot is blocked, each character’s Hyper Strike comes with a unique effect to open up subsequent chances. Peach charms anyone between her and the goal, temporarily stunning them; Waluigi wraps the goalie in a tangle of vines; and Mario’s flame-licked boot scorches the goalie’s gloves, making him unable to pick up the ball for a short duration.

Perhaps the best thing we can say from our limited time with Mario Strikers: Battle League is that it works as an online game. That might seem obvious, but with Nintendo titles, a smooth online experience is far from a guarantee. We experienced minimal lag during our limited game time and never felt outdone by the connection rather than our own lack of skill.

For the committed, competitive player, Mario Strikers: Battle League looks set to be a game you could sink countless hours into. With unlockable, stat-modifying gear thrown into the mix, the opportunity for refinement only expands. Grab three like-minded friends, and the online leagues could provide a team sports experience unmatched on the Switch. All of that, however, comes with the question of whether or not you can overcome that initial barrage of mechanics and manic action. As Strikers fans, though? We’re eager to don our boots for more next week.