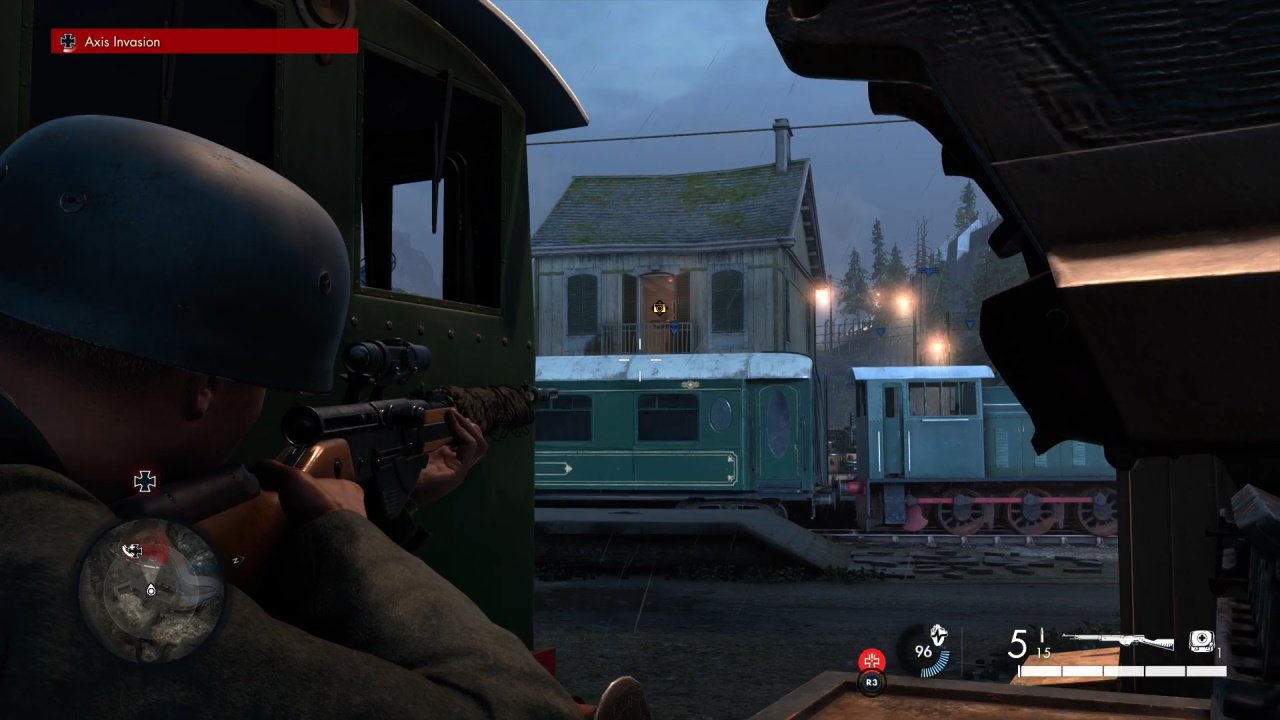 It usually ends in an instant. Whether it’s a precise shot lined up across hundreds of meters, a frenzied burst of SMG fire, or a heedless foot lowered onto an unseen landmine, Sniper Elite 5’s multiplayer shootouts rarely last long. But that final trigger pull? Only the ending note to a symphony of stealth, stalking, and tension. The real joy lies in the hunt.

Spawn into another player’s game as the infamous Sniper Jäger, and your objective is simple: find and kill the Allied sniper. What that will entail, however, depends entirely on the mindset of your prey. Are they a chaotic speedster, tearing through the French countryside with reckless abandon and a handful of explosives? They might be an agent of the night, slinking through the level with little more than a whisper. Or perhaps they’ll be waiting; shoring up defenses in preparation for your unwelcome arrival.

Assessing your target is one of Sniper Elite 5’s great thrills. The opening act for the Jäger can feel almost like a detective game as you hone in on your prey. By tagging other axis guards, the Jäger is notified whenever they’re alerted or under attack. As you build a web of informants, you’ll stumble across entire squads of butchered soldiers, or a single guard choked out by a key entrance – evidence that you’re on the right track.

You won’t know at which point you joined the fray, meaning it’s your job to assess the level’s situation and determine your target’s next objective. The allied sniper will know roughly when you’re closing in, but you’ll only find out if you risk activating a nearby phone to reveal both your current locations. A stealthy player might remain unnoticed for some time, but hearing a gunshot ring out in the distance and a flood of yellow alerts spring up generates an intense rush of adrenaline. At last, you’ve got them.

What follows is a steady ratcheting of the tension as you attempt to close in without revealing yourself. You could risk pretending to be an NPC, or lay traps on the exit to hem them in. Feeling bold? Lob a few grenades ahead to alert them and get the party started.

When you see them – if you see them, and not just an unexpected bullet to the head – there’s the brilliant realization that the figure skulking through your crosshair thinks that they're safe. That they are the one controlling the flow of the narrative. All you need to do to change the story is line up the shot.

You pull the trigger. And as Sniper Elite’s famous slow-motion bullet cam kicks in, you can smugly be sure that your victim is watching the same X-ray execution play out with a mix of shock and horror. Better luck next time, Fairburne.

Invasion mechanics seemed to have slipped into the gaming zeitgeist like a surprisingly late knife in the back. FromSoftware’s Dark Souls series has been sending red-wreathed invaders to ruin our day for more than a decade, but only recently have other studios started to try their hand at the format.

What makes Sniper Elite’s invasions brilliant is that, for the invaded player, they don’t really matter. In Dark Souls or Elden Ring, an unfortunately timed invasion might put extensive progress and several levels’ worth of Souls or Runes at risk. In Deathloop, invasions are a core part of the systems and story. The problem is that both put too much at risk for one side of the equation. Get killed in Deathloop and you’ll be sent scuttling back to the start of a run – all current progress will be lost.

In Sniper Elite 5 the stakes are life and death, yes, but only that. Take a Jäger’s shot through protagonist Karl Fairburne’s impeccably chiseled jaw, and you’ll rarely lose more than a minute or two thanks to generous autosaving. All the tension, engagement, and stress is supplied directly through the mechanics, not the burden of knowing just how much you’ll have to replay should you lose.

Sniper Elite 5 understands that its invasions shouldn’t make or break a given campaign run. Instead, they’re a chance to throw an extra, human-controlled difficulty modifier into each level’s playground. You can even request a rematch afterwards, resetting both players to their exact positions when the invasion began.

Forget the need to put any real progress at stake. Sniper Elite 5 knows that the jolt of exhilaration supplied by watching your shot connect with a distant player is the only reward we need.