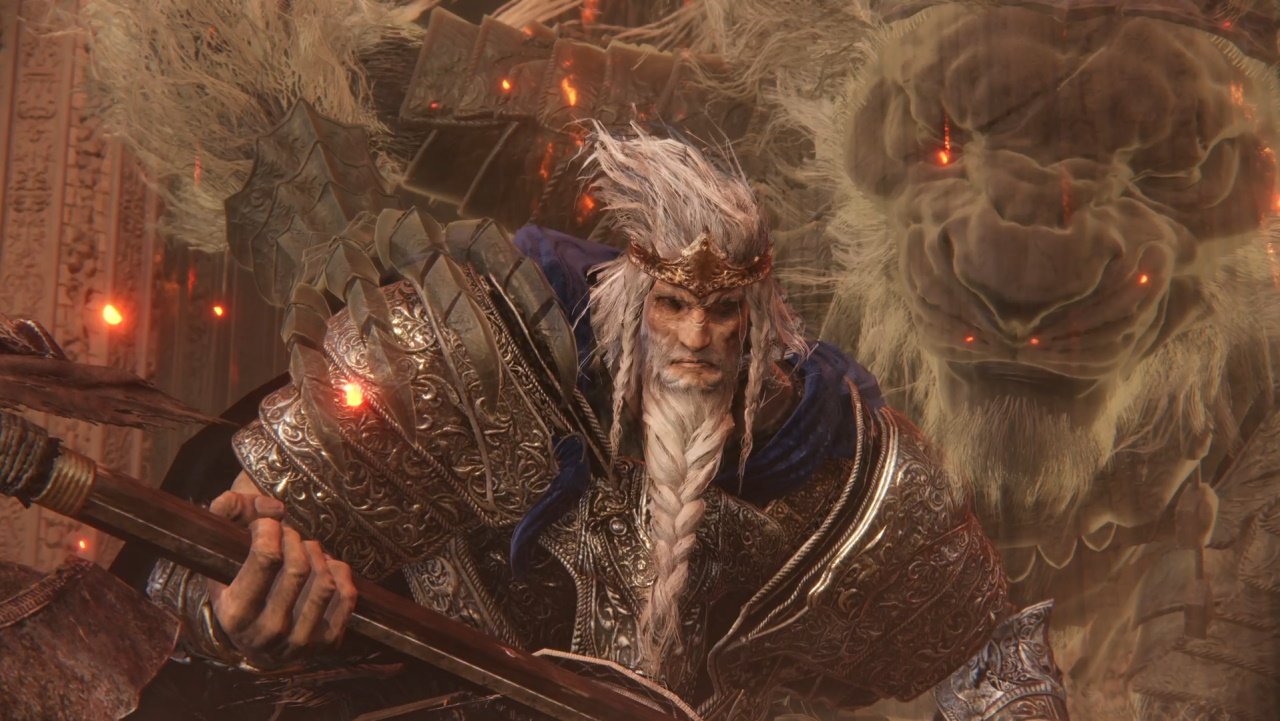 The last hurdle before you can face the final boss of Elden Ring is the Godfrey, First Elden Lord boss fight. As per Elden Ring’s usual convention, this is a two-phase battle which is also the Hoarah Loux boss fight. This beefcake of a boss is a test of the skills you’ve learned throughout the game, and he can prove particularly tough for certain arrangements. In this guide we’ll cover how to beat the Godfrey / Hoarah Loux boss fight in Elden Ring by breaking down key tips and tricks needed to claim victory.

The Godfrey boss fight isn’t as tough as the likes of Maliketh or Malenia, but his AoE attacks and deadly grapples can catch you out if unprepared. Godfrey deals high damage but is very slow and telegraphs each attack heavily. Play carefully and hold your dodges until the right timing for success here.

Our key tips for how to beat Godfrey / Hoarax Loux in Elden Ring are included below, before we dive into the specific moves to avoid in each phase.

High Vigor is essential: Godfrey deals immense damage per hit, and is capable of one-hitting low-health characters. Unless you’re confident of securing a no-hit run – in which case, why on earth do you need our tips? – we recommend boosting your vigor to at least 40 for this fight.

Avoid Holy damage: As another major demigod of the Golden Order, Godfrey absorbs a significant amount of Holy damage. He’s also resistant to the build up of Bleed, Frost, and Sleep making it tough to trigger their damage bursts on him.

Godfrey is weak to slash damage:If possible, using weapons like katanas and curved swords will see you doing extra damage here. All Physical damage types, along with Lightning, Magic, and Fire are also effective.

Jump to avoid stomps: Godfrey and Hoarah Loux’s most oppressive attacks involve repeated stomps. In basic form, these send rock shards along the ground in a cone. When powered up, Godrey/Hoarah will emit a shockwave which spans almost the entire arena.

These seem terrifying, but you can avoid the effects of stomps entirely by jumping. It’s easier than dodging and means you can land jumping attacks in many cases. Prepare to jump a lot in these fights.

Avoid summoning allies: In a rare case, the Godfrey boss fight is much tougher in multiplayer than it is alone. Many of his attacks cover almost the entire arena, and his second phase grapples will make him invincible if he successfully grabs an ally. The extra boost to his health is therefore rarely countered by having another player in the fight.

You should still bring Spirit Ashes into the fight, and the NPC Nepheli Loux can be a great help as a summoned ally owing to her larger health pool. Our recommendations for the best late game ashes can be found here, but we’d recommend avoiding other player summons unless you’re up for a challenge.

Elden Ring Godfrey moves to watch out for

In phase one, you’ll be battling Godfrey, First Elden Lord in a very similar fight to that encountered as a golden shade earlier in the game. You have loads of time at the start of the fight to prepare, so consume buffs and summon Spirit Ashes before you move forward into the fight.

In general, you’ll want to stay close to Godfrey during this first phase as this will limit his dangerous dash stomps. Focus on dodging his slow swings and attack back when he finishes a chain with an overhead swing or a jump attack. For all stomp attacks, watch his leg and wait for it to start coming down before you jump.

Axe throw: Godfrey often begins the phase with this move. He leaps into the air, then throws his axe into the ground ahead before slamming down after it. If you’re far away, you can sprint backwards/dodge to avoid this. If close, run forwards as soon as he jumps to get past the axe and his slam and be ready to hit him back.

Fissure: Godfrey raises one foot, then slams his axe into the ground, creating a fissure which runs the length of the arena. After a brief delay, this explodes upwards. Dodge away from the initial slam, then take stock of the fissure direction. Tun sideways out of the fissure area as quickly as possible. If you can’t escape, you can also time your dodge to the explosion.

Shockwave stomps: Godfrey lifts his axe overhead and raises one foot while emitting a roar. After a lengthy windup, he slams his foot to the ground, releasing a massive shockwave. While he’s cloaked in the red aura, all his stomps will emit this shockwave.

During the first massive charge up, you can hit Godfrey for free damage. Jump as his foot comes down to avoid the effect of the stomp and land a jumping heavy in return. Jump for all future stomps to avoid damage, though be prepared for them to be much faster.

Elden Ring Hoarah Loux moves to watch out for

At 50% HP, Godfrey enters phase two and becomes Hoarah Loux, Warrior. In this phase he’ll ditch his axe in favor of grapple attacks which deal enormous damage if successful. The good news is that they’re still highly telegraphed and rarely have follow ups, allowing you to dodge them and counterattack.

All the grabs come out in very delayed attacks, similar to Morgott, Godfrey’s son. Don’t panic roll and wait for the attack to approach before dodging. Focus on avoiding stomp damage, then strike back after you successfully dodge a grapple attack to beat Hoarah Loux in Elden Ring.

Two-handed grapple power bomb: At the start of phase two, Hoarah Loux will charge at you with both hands raised to his sides. He’ll attempt to grab you and power bomb you into the ground. Walk calmly backwards and dodge sideways or away when you see his hands lower down to his sides in a sweep. You’ll have plenty of time to attack him afterwards. He also performs a faster running version with arms crossed. Stay calm and dodge this in the exact same manner.

One-handed grab: Hoarah Loux puts one arm across his body onto his shoulder and winds the other arm up in the air behind him. He then lunges forward to grab with the raised arm. Again, wait for his grabbing arm to swing low to the ground before dodging away. Hoarah often uses this after hitting you with a stomp or kick, so avoid panic rolling in those cases.

Shockwaves: Hoarah charges up with one leg raised in the same manner as Godfrey during phase one. He’ll slam the foot down emitting a shockwave, then slam both hands into the ground for a second wave. He’ll sometimes follow this with a final foot stomp. Stay close to him and jump as his foot/hands land to avoid all damage and land a jumping hit in return.

Eruption: Like the shockwave attack above, but begins with a large roar that knocks you over if close. Hoarah then jumps and slams the ground in a shockwave, then sticks both hands into the ground and causes a massive eruption in several places around him. Jump the first shockwave, then sprint away from him to clear the eruption as it charges. Don’t run sideways like in the clip above.

Along with the hefty hunk of Runes, the Remembrance of Hoarah Loux can be traded with Enia at Roundtable Hold to obtain the Axe of Godfrey or Ash of War: Hoarah Loux’s Earthshaker.

That’s all we can teach you about how to beat the Godfrey / Hoarah Loux boss fight in Elden Ring. If you’ve already taken down Malenia, Blade of Miquella (read our Malenia guide here if not), you’ve only the final boss of the game to beat. Best of luck, Tarnished!