Elden Ring: How to beat the Malenia boss fight

The Goddess of Rot Malenia is the toughest fight you'll face in Elden Ring, but with the right tips and tricks you can overcome her. 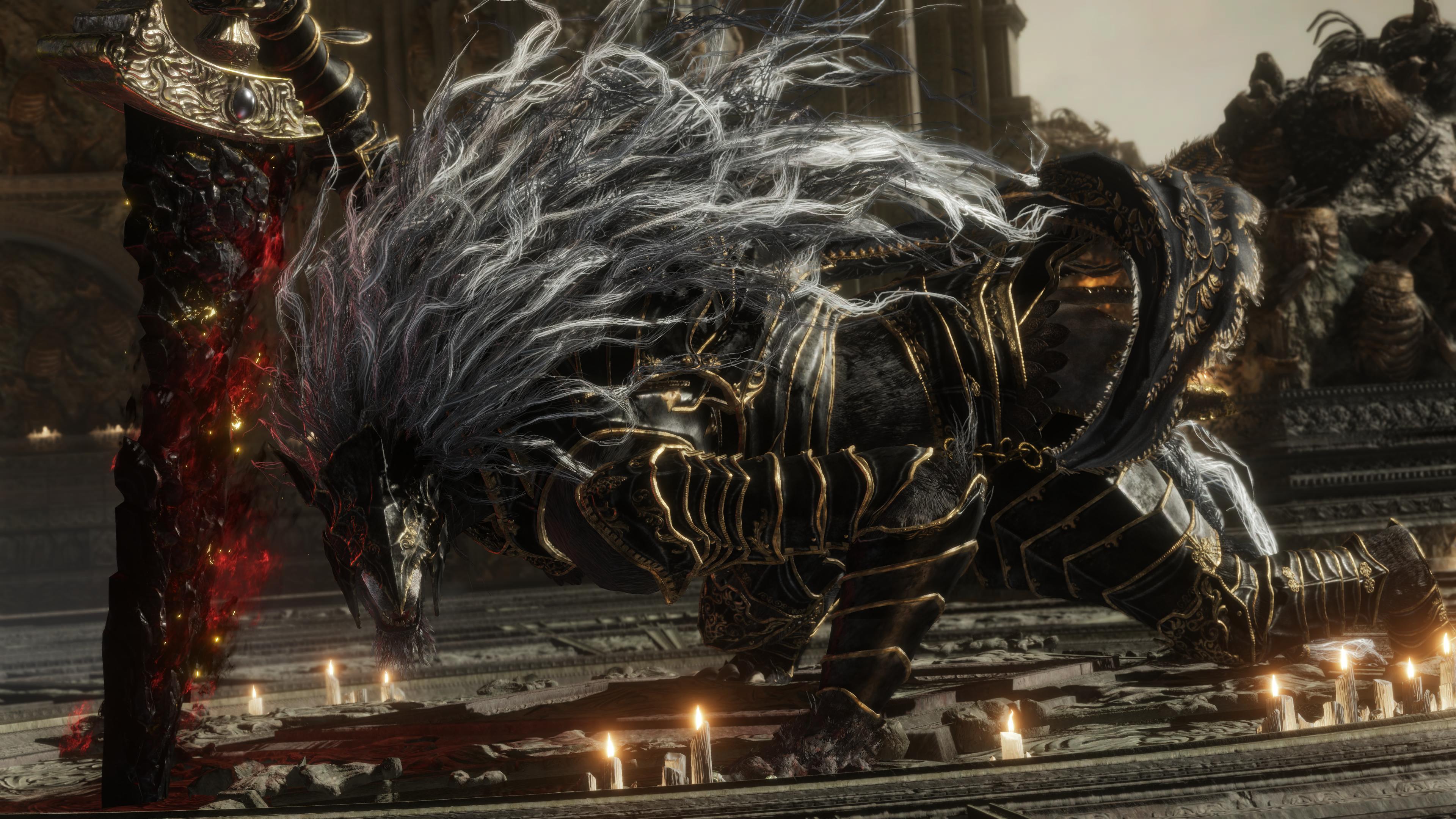 Elden Ring: How to beat the Maliketh boss fight

After 30 years FIFA is no longer the big name in soccer games, for now.

At the end of Crumbling Farum Azula in Elden Ring is the Maliketh, The Black Blade boss fight. For those who’ve yet to beat Malenia, Maliketh will likely be one of the toughest fights you’ll have faced so far. The guarder of Destined Death uses black flame strikes that deal immense damage, burn you, and reduce your maximum health.

Fortunately for those who want to know how to beat Maliketh in Elden Ring, the Black Blade leaves plenty of openings too. Our Elden Ring Maliketh guide will teach you the key tips and tricks required to overcome Queen Marika’s brother and release the Rune of Death.

Elden Ring: How to beat Maliketh, The Black Blade

The Elden Ring Maliketh boss fight is a two-stage battle which begins with you facing his Beast Clergyman form before moving on to Maliketh, The Black Blade. The former deals high damage but is extremely predictable and easily taken down once you’ve learned a few tricks. The latter is a far more serious affair, but follow the advice below and you’ll be ready for all the attacks he throws at you.

Avoid Holy damage: Maliketh is highly resistant to Holy damage, and has strong resistances to Bleed and Frost build up. The latter two can still trigger, but we’d highly recommend changing weapon or affinity if you’re primarily using a Holy weapon at this stage.

Dodge towards and under him: Maliketh’s main blind spot in both phases is underneath him and to his side. Stick close, dodging towards most attacks he throws out and you’ll have far more opportunities to hit back. Many of his sword swings will miss you in these positions, and they’re far easier to dodge than his ranged black flame strikes.

Get the Blasphemous Claw: Maliketh has a unique weakness in that any of his attacks which flash golden can be parried using the Blasphemous Claw. This key item can be obtained very close to the fight itself. As you come up onto the large stairway from the Site of Grace, turn left and follow the path down to jump over the gap.

You’ll eventually be able to turn right and climb down to a bridge across to a tower in the position shown above. As you near the end of the bridge, you’ll be invaded by Recusant Bernahl. Defeat him and he’ll drop an armor set along with the Blasphemous Claw.

We recommend equipping the Blasphemous Claw in one of your quick three item slots, accessed by holding Triangle on PlayStation or Y on Xbox. Activate it as Maliketh strikes following a golden flash and you’ll stagger him for a significant time. It has a generous parry window, but be aware that Maliketh will flail his sword twice while staggered, so avoid getting hit by these swings as you approach. Read more about how to use it here.

Ranged builds should use fast, low-cooldown abilities: Maliketh’s ranged attacks are some of his most dangerous, and the openings to strike back are short. If you’re using a purely ranged build, we recommend equipping fast-casting Sorceries or Incantations with little cooldown like Lightning Spear to capitalize on openings. You may also have time during the opening to unleash powerful spells like Comet Azur as the Clergyman approaches.

Beast Clergyman moves to watch out for

In the first phase, the Beast Clergyman will use a number of Beast infancations along with a dagger. You’ll have time at the start of the fight to summon Spirit Ashes (we recommend Black Knife Tiche or the Mimic Tear), but we highly recommend sprinting into the main arena after doing so. You do not want to fight the Beast Clergyman on the small bridge at the entrance.

Most of the Clergyman’s incantations have massive tells like him sticking his fist in the ground. Almost all can be dodged by rolling towards him. Focus on closing the distance with dodges and then punishing him after he does a dagger slam which pokes down into the ground.

Bestial Sling: The Clergyman hurls a handful or rocks in a cone forward. There are several triggers for Bestial Sling, some coming at the end of a move sequence. This is the hardest incantation to dodge but once you recognize it, dodge towards and to the side as the rocks are about to be flung to avoid getting hit.

Stone of Gurranq: The Clergyman grabs a stone from the ground in one hand and hurls it forward. Dodge forward or to the side as the rock approaches.

Beast Claw: Beat Clergyman raises a paw up, sticks it in the ground, then unleashes waves of claw blades along the ground which will launch the player into the air. This can either be unleashed forwards or in a circle. Dodge forwards through the attack, not to the side.

Ground rupture: Beast Clergyman sticks his blade in his mouth, raises both hands up, and slams them into the ground. This hurls lumps of rock up which crash down after a short delay. Back up when you see the initial animation, rolling backwards. Spot the patches of dust  and rubble on the ground as he strikes to see where the rocks will launch from and land. This attack is often followed by Stone of Gurranq or Bestial Sling.

Maliketh moves to watch out for

At around 50% HP, you’ll need to beat Maliketh, The Black Blade. In this phase you need to stay patient, and only strike at key openings to beat Maliketh. He’s most dangerous when you’re far away from him, as he’ll unleash more black flame attacks which reduce your max HP. If you’re a melee build, stick close and try to get under/behind him to force him into using easily avoidable sword swipes. Watch for the golden glow on his sword to know when you can parry with the Blasphemous Claw.

Opening slice: At the start of the phase, he’ll always perform a sweeping slice. If you dodge this, he’ll usually leap onto a pillar and either slam or unleash a black blade flame attack. You have enough time to heal at the opening, but you can also run directly toward him as the phase starts to get behind the hit.

Sword swipes: Stay near and Maliketh will usually attempt to hit you with several sword swipes. The most common and easily punishable is a low sweep followed by a slow overhead slam.

Black Blade: Maliketh jumps in the air and unleashes 2 - 3 Black Blade flame attacks. Hold your nerve and only dodge to the side when the flame is incoming. If he fires two, he’ll follow with a slam that does an AoE explosion. This can usually be parried with the Blasphemous Claw, though if you go too late the AoE explosion will still hit.

If he does three flame attacks, the third will come out delayed, so slow your dodge timing. He’ll then spin twice along the ground toward you as the final hit. The spin attack can be parried with the Blasphemous Claw or dodged by rolling towards his direction.

Slam ‘n’ Slice: Maliketh jumps into the air and drives his sword into the ground. Sometimes he will do one impact which leaves a small AoE explosion. Other times he’ll leap up again and land to summon a zone of slices similar to Malenia’s Waterfowl Dance. Move backwards and to the side to avoid getting caught in the center.

Overcome the wielder of Destined Death and you’ll earn the following Maliketh rewards in Elden Ring:

The Remembrance of the Black Blade can be traded to obtain Maliketh’s terrifying weapon, along with a Black Blade incantation. You’ll also find yourself teleported to the royal capital once more, though this time things will look significantly different to how they used to…

That’s all we can teach you about how to beat the Maliketh boss fight in Elden Ring. If you’ve taken him down, you might feel brave enough to venture into the Haligtree and face Malenia, Blade of Miquella, Elden Ring’s toughest opponents by far. Follow our Malenia boss fight guide tips for a helping hand there.