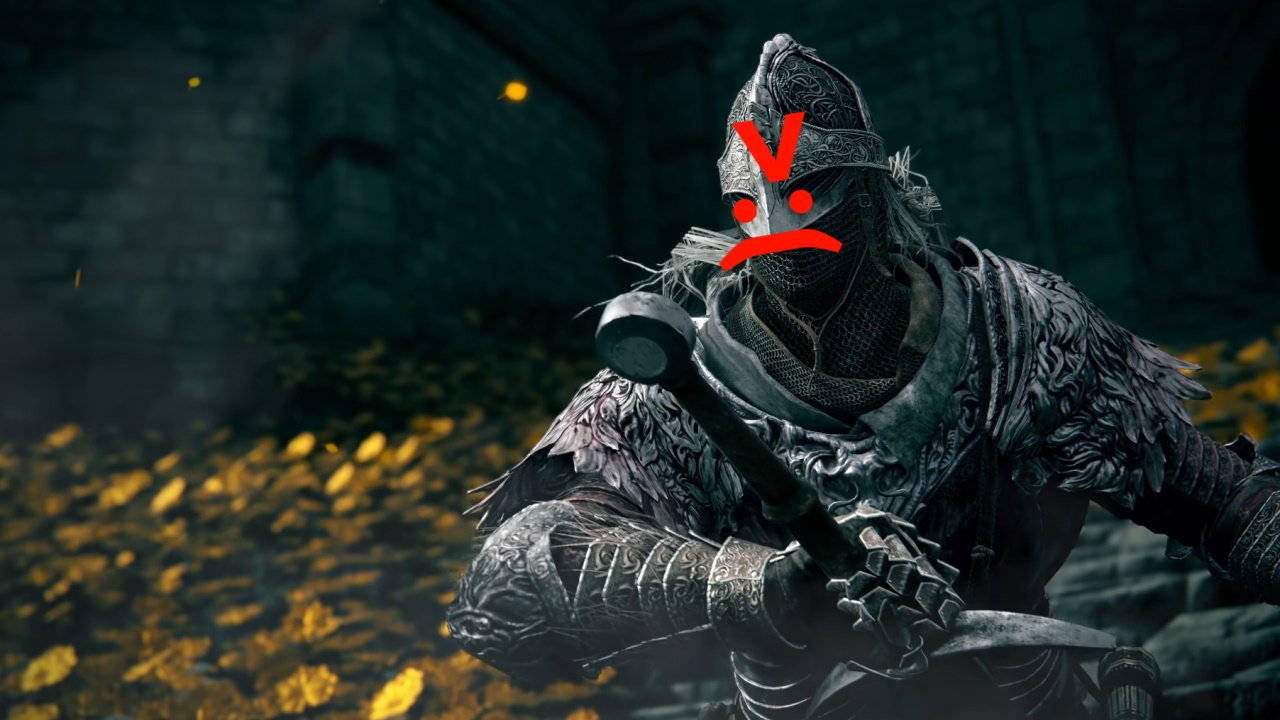 Elden Ring isn’t a perfect game. But as the metacritic rating shows, developer FromSoftware got pretty damned close. By this point, many of those those exploring the Lands Between have sunk hundreds if not thousands of hours into multiple playthroughs. Their love for the world and it’s many very angry bosses is clear.

But they don’t love everything. To celebrate just how perfect Elden Ring isn’t, the game’s community took to Reddit this weekend to share their main criticisms. The confusing narrative? A wonky late-game difficulty curve? Inconvenient co-op arrangements? All but minor bosses when laid next to the Malenia-grade inconvenience of pop-up messages and button prompts. Here are the least-loved features of Elden Ring.

As enemies close in, you ready your weapon, tense yourself, and… do absolutely nothing. You are battered to death in a flurry of panicked key presses. If you’ve played even a decent chunk of Elden Ring already, you probably groaned just reading this one.

Dare to be so presumptuous as to activate a Stonesword Key door or pull a dungeon’s lever, and Elden Ring will slap a message on the bottom of the screen informing you that, yes, you did just do that thing. What it doesn’t tell you, however, is that this seemingly harmless message will deny the ability to attack, dodge, or do anything remotely useful until you dismiss it. Given Stonesword doors often hide enemies waiting to ambush you, it’s all too easy to find yourself desperately mashing every button you can to just make that bloody message go away while your character is impaled repeatedly.

We know we just used a Stonesword key – is it too much to ask that the message disappears on its own? The system is already there for group password rewards, making it even easier to forget that you actually have to dismiss some, but not all, messages. In our view, there’s no death more unjust in Elden Ring than a message-blocked one, and we’ve died hundreds of times to Malenia’s Waterfowl Dance.

2. Paying a flask to revive Torrent

That’s not the only mixed message the Elden Ring community has highlighted. Another raising hackles with the game’s fans is the option to resummon Torrent by spending a healing flask. Or as Reddit user piquant-nuggets puts it: “YES I WANT TO USE A *!#$ING FLASK CHARGE TO REVIVE TORRENT”

Many of Elden Ring’s bosses are designed to be fought on horseback. Dragonfire, for example, is notoriously difficult to outpace on feeble human legs. So when Torrent falls to an enemy’s stray blows, you’ll naturally want to get back in his saddle as soon as possible. Elden Ring isn’t so sure, however. Perhaps you didn’t mean to hit that button, and would prefer instead to be flattened by that incoming tail swipe? Just to be certain, could you fill out this survey?

When all your attention is focussed on dodging that next incoming boss swing, the last thing you want to be doing is selecting from multiple choice Yes/No menus. Especially when the answer you’re likely to hammer automatically defaults to No. Perhaps this isn’t hard enough though, as one user suggests that the prompt be replaced instead by a captcha you need to type mid monster fight.

Bowse have, historically, been pretty terrible in FromSoft's former games. Yes, you could cheese certain enemies or snipe them from afar, but the damage of even mighty arrow-flingers was so pitiful and the aiming so unsatisfying that you could easily fall asleep while whittling down most enemy lifebars.

Elden Ring looked like it was going to do things differently. There are plenty of different options to unlock, tons of ammo types, and they even gave the starting Samurai class a bow to practice with. Sadly though, the magic-free ranged options fall off faster than the projectiles they fire. Not that it’s difficult when most of Elden Ring’s arrows travel slower than the residents of your local care home.

All of Elden Ring’s bows and crossbows lack decent stat scaling, meaning their damage drops off dramatically compared to other weapons as your levels shoot up. Worse still, you’ll need to constantly harvest resources or cough up Runes to supply the ammo you’re after. Underleveled and underpowered. Brilliant.There’s a dearth of decent Ashes of War, too, meaning you’re forced to give up one of Elden Ring’s coolest combat features to instead spend your days clunkily adjusting a reticule to tap enemies down from afar.

Elden Ring’s map is extremely useful. So useful, in fact, that it seems the game doesn’t want you to leave it. Opening the map for a quick location check while out and about? A tap of the Touchpad or Change View button and you’ll be ready for a scan. Want to close it? You’ll need to press Circle or B.

On paper, it sounds reasonable. And yet, a lifetime of other video games seems to have ingrained the expectation that maps open and close with the same button. It’s not just us being brainwashed, either. A wealth of players shared their woes over the button selection, most notably because the resultant spamming of the back button often leads to your character hopping backwards off a ledge or dashing forwards over one when mounted on Torrent.

Okay, so the menus can be fiddly, but what about actual game design issues? We’ll wrap up with the one complaint we’ve seen come up time and time again: Roundtable Hold. As Reddit user _Joshua-Graham_ notes, the hub zone feels dead far too quickly. FromSoft’s games always include some kind of space for NPCs – a spot to return to when you want to upgrade weapons, learn spells, and generally catch up on what fresh miseries are facing your companions in the world.

Roundtable Hold starts this way. The space is packed with NPCs on your first arrival, and you can see the progression of stories like Sorcerer Rogier and the Black Knifeprint play out upon each visit. Unfortunately, by the time you set forth into the Altus Plateau and Leyndel, Royal Capital, Roundtable is an empty shell. Almost all the NPCs will have abandoned it, and few to none of the new characters you meet will ever bother showing up there.

With only Gideon, Hewg, and Roderika left, Roundtable feels lifeless for practically half of Elden Ring’s runtime. The zone is so dead, in fact, that you can hardly blame anyone for signing up with Volcano Manor’s band of murdering miscreants upon arrival. At least there you’ll have some company for a time.

You can read the full list of Elden Ring criticisms over on the game’s subreddit. What are your biggest complaints? Share them in the comments below.