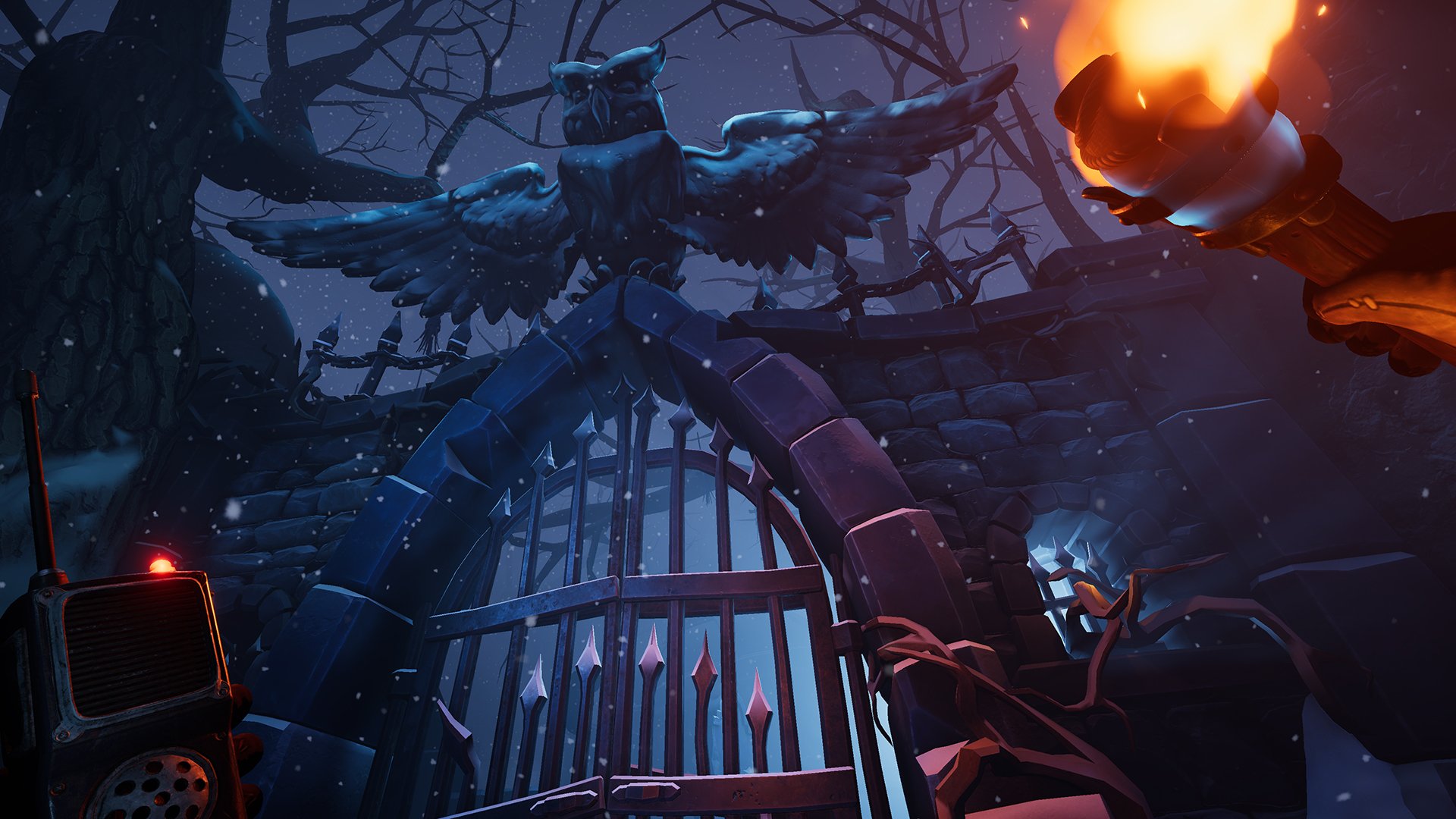 Metroid Dread is now the best-selling game in the franchise

The story of Total Mayhem Games, the developer of the month in this edition of the HyperX Indie Highlight, is an unconventional one. They may be the only students whose teachers have advised them to drop out of college because they were too good at what they were learning.

The team started out as a group of university students who built a game for a class project. After 14 weeks of work, they put together a first-person puzzle game called We Were Here that they released on Steam for free in 2017.

Flash forward to 2022, and the team has grown into a successful indie studio. Their college project not only turned into an award-winning success, it became the start of the We Were Here series. Now Total Mayhem are ready to release their fourth game in that series, We Were Here Forever.

This installment of the game promises to give fans of the series deeper insight into the mysteries of Castle Rock, and to assist in fleshing out the world Total Mayhem have been releasing shorts called The Chronicles of Castle Rock that shed light on the tragedy that befell the castle and the city of Rockbury.

AllGamers: So, you started as a group of students with a dream. What was the moment that made you realize, “Maybe this fun thing has a real chance of working?”

Lucia de Visser, Managing Director and Co-founder, Total Mayhem Games: Well, it’s the easiest to speak from my personal experience. I, myself, was an art student, studying at the Art Academy named Willem de Kooning in Rotterdam. I have been telling stories with all kinds of media, mostly photography. One of my biggest dreams was to use gaming as a medium, but I was not confident enough that that could be a path for me to walk. One day I received a message from a friend: “there are openings for a minor at your school, for a program called ‘Game Design & Development’, you should try to apply.” And so I did, together with 44 other students.

First we had to do a small few-weeks-assignment and produce a mobile application. After that, we were split up into three groups and developed three different games. I, together with my 2 team members, got scouted by other teams. We formed the group that was going to be responsible for the first title called ‘We Were Here’.

We wanted to do something that was different from what other groups were doing. Benjamin, our walking gaming encyclopedia, was really in love with the concept of asymmetrical co-op. And we fell in love too. We created these ‘explorers’, two unidentifiable characters that really gave the players the impression that it was their story, not the one of some heroes like Lara Croft or Nathan Drake.

We never thought we had something in our hands, but when we launched the game on the 3rd of February 2017, we found out quick enough it was indeed something. I remember one of my team members, Christian, walk up to me and saying: “Lucia, did you check Steam yet? We have over 10,000 downloads in just a few hours!”. And then the counting went on; 200,000 downloads in the first month, 400,000 in the next.

Our teachers were impressed with the numbers. They told us they were going to give us some advice they never handed out to other students in their 15 years of being teachers at this minor: “you should pause your studies to pursue a career in gaming”. And so we did.

AG: I imagine the idea to make the shorts came as a reaction to some of your fans’ wishes to learn more about the world that you’d created. How did you settle on the idea to tell these tales with actors instead of in-game, and how much of the story has been circulating in your minds since you envisioned the concept in 2017?

LdV: Well, it kind of happened by accident. As Bob Ross would say, it was a happy little accident. Our Creative Director Ruud wrote a lot of stories by himself, late at night. He showed us the next day what he wrote and our producer, Geoffrey, was immediately hung up by the stories. The quality was really good and it told a really nice background story that indeed a lot of fans would be really excited about. The idea first started out with a podcast, where Ruud himself would tell the stories one on one to the fans. but Geoffrey felt like it didn’t give the story the attention it deserved. And that I think is completely true. We were looking for a way to give more body to these very vivid stories. Geoffrey came with the idea to make a professional production out of it and I was really excited about it.

He gave us a contact who did some serious film productions, and before we knew it, the Chronicles of Castle Rock were born. We created a vision together with our Concept Artist Rocky, Ruud, Geoffrey and the Production Manager of the film company, and in just a matter of two months we were filming a mini series with British Actor Nick Cornwall in a castle in Gent, Belgium.

Once, in 2017, my team and I built a foundation of story. Now, Ruud has a way of bringing it to the next level. The world of We Were Here is more vivid than ever and I still can’t believe all the amazing things we accomplished 'til now.

AG: So what can veterans of the series expect going into We Were Here Forever? How long is it compared to the previous installments?

LdV: It is by far the longest game in the series. It’s not strange, having been in production roughly for the last 2.5 years. If you are an experienced player, we aim for a good 12 hours of gameplay. We do say, the world is way more lively than it ever was. Don’t rush the experience and enjoy the journey together with your friend and all the world or game has to offer. The story behind Castle Rock finally unfolds, so buckle up and enjoy the ride!

AG: Would you recommend that new gamers coming into this series play the previous installments first, or will the games and the story clips be enough to get them up to speed?

LdV: We designed We Were Here Forever to be able to be enjoyed without having to play the other titles. BUT… If you want to have the best experience and know all the mysteries and narrative the series has to offer: start with We Were Here. We Were Here is not specifically representative of the quality of our latest installments, but it still is a nice game to try to figure out if you like the concept and be fully aware where your journey started and understand why you’re here now in We Were Here Forever.

We Were Here Forever will bring you up to speed nonetheless, but you know, in the end it’s still a series.

AG: What’s the planning process like for your team’s unique take on creating a puzzle game? What comes first in the concept, the level design or the puzzle design?

LdV: It really, really depends on the area and puzzle. Before aunt 'Rona said hello to the world, we used to work in department teams: Game Design, the Art Department, the Programming Department, and Ruud, Geoff and I floating in between. We had to work from home and the whole dynamic changed within the team. So we divided the studio into smaller teams we called ‘Strike Teams’. These consisted of one artist, one developer and one game designer. This worked out just great. Every team was the product owner of their own area in the game. So one team developed puzzles before areas, and the other exactly the other way around.

For example, the Illusion Room puzzle in our game (we call it the dodecahedron puzzle), was the creation of one of our game designers, Thijs. Actually every area and puzzle was already set in stone, but he just had the feeling that he had a really good concept for a puzzle in his hands, so he made it in his own leisure time. He presented us with his concept and we loved it. We especially rewrote the story to fit this puzzle in the game. Sometimes if something’s really good, you just have to work your way around it.

Other areas really tell a story with the environment and the puzzles support that narrative. It really depends which developers worked on the areas and puzzles. That’s also why everything feels – and is – completely custom-made for the experience.

AG: Were most of the team huge puzzle game fans from childhood? If so, what are some of your favorite games in the genre?

LdV: Actually, mostly our game designers are really big fans of puzzle games. But that’s what they’re designers for, they like a challenge! I always used to play puzzle games with my parents when I was young, because I am an only child. It was a really fun way to be able to play together with my parents. Team favorites are Myst, Portal 2, and Keep Talking and Nobody Explodes! Some names, huh?