Learn where falling snow marks something unseen to access the Heretical Rise in Elden Ring. 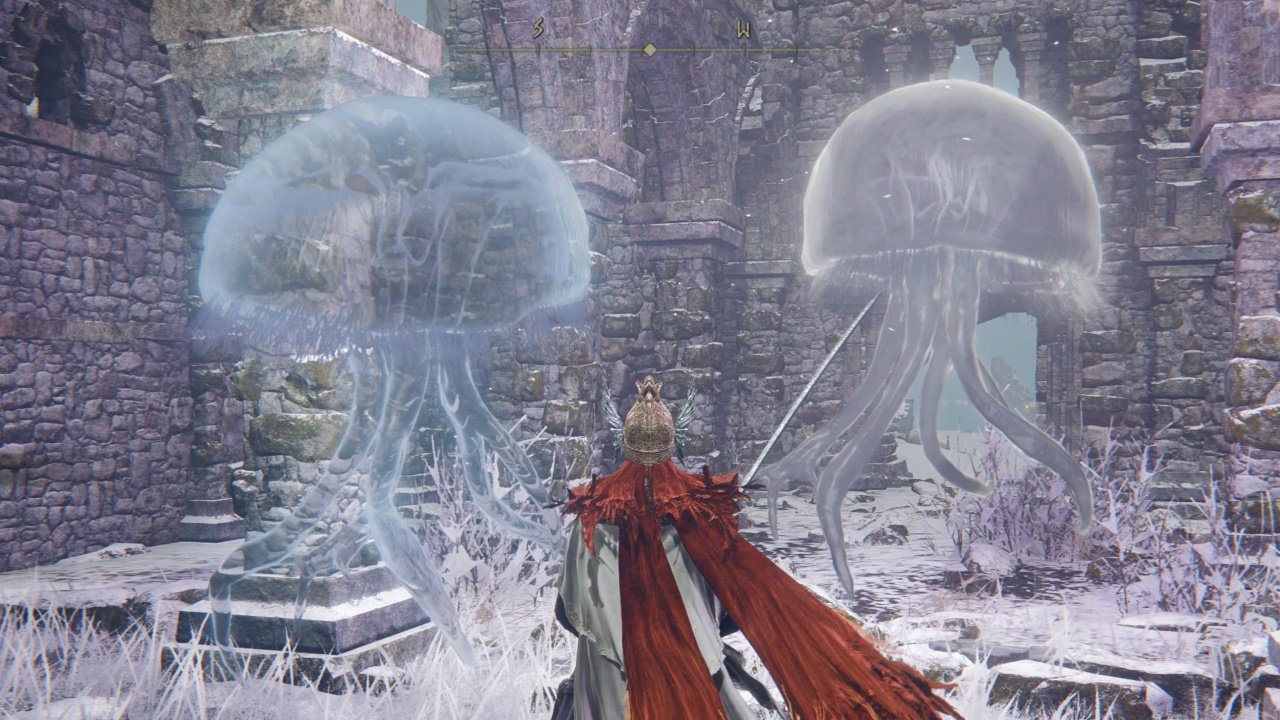 And delivers a huge number of buffs to weapons, weapon arts, and spells.

Reach the Mountaintop of the Giants in Elden Ring, and the Stargazers' Ruins will serve up a novel new puzzle to solve. The Stargazers' Ruin seal is easy to find, but figuring out how to open it isn’t easy. A Spirit Jellyfish nearby will be calling out for its sister. Fortunately, we can solve both problems in one easy step. Below, we’ll explain how to open the Stargazer Ruins seal by finding the Jellyfish sister in Elden Ring.

To open the Elden Ring Stargazer Ruins seal we need to bring the sister of the Spirit Jellyfish which talks here. Fortunately, the Jellyfish sister is the exact same Spirit Jellyfish that Roderika gave us ages ago in Limgrave’s Stormhill Shack. If you missed her there, Roderika will be in the NPC hub area of Roundtable Hold. You may have already convinced her to become a spirit tuner so that you can upgrade Spirit Ashes.

Use the Spirit Calling Bell – available from the Twin Maiden Husks in Roundtable Hold if you don’t have it already – to summon the Spirit Jellyfish Ashes next to the talking Jellyfish in Stargazer Ruins. The talking Jellyfish will rejoice and the two will vanish into the stars together. Yes, that’s right, an actual positive ending to a quest in Elden Ring. They do happen!

Once you’ve summoned the Spirit Jellyfish and the pair disappear, the Stargazer Ruins seal will lift automatically, allowing you down the nearby stairs. Inside you can claim the Primal Glintstone Blade as a reward. This talisman is a powerful one for sorcerers – it reduces the FP costs of sorceries by 25% at the cost of 15% of your max HP.

If you killed the jellyfish at Stargazers’ Ruins, don’t worry. You might be mean and cruel, but it’ll respawn whenever you rest at a Site of Grace, allowing you to return and solve the puzzle in future.

That’s all there is to know about the Stargazers’ Ruin in Elden Ring. Once you summon the Spirit Jellyfish sister you’ll still be able to use the Spirit Jellyfish Ashes, so there’s no reason not to help out their sister when you’re in the area. We also have a guide for the Heretical Rise puzzle which you can find in the nearby area.