Bugsnax makes the jump to Xbox, Switch, and PC this month

Arriving with the free Isle of Bigsnax expansion. 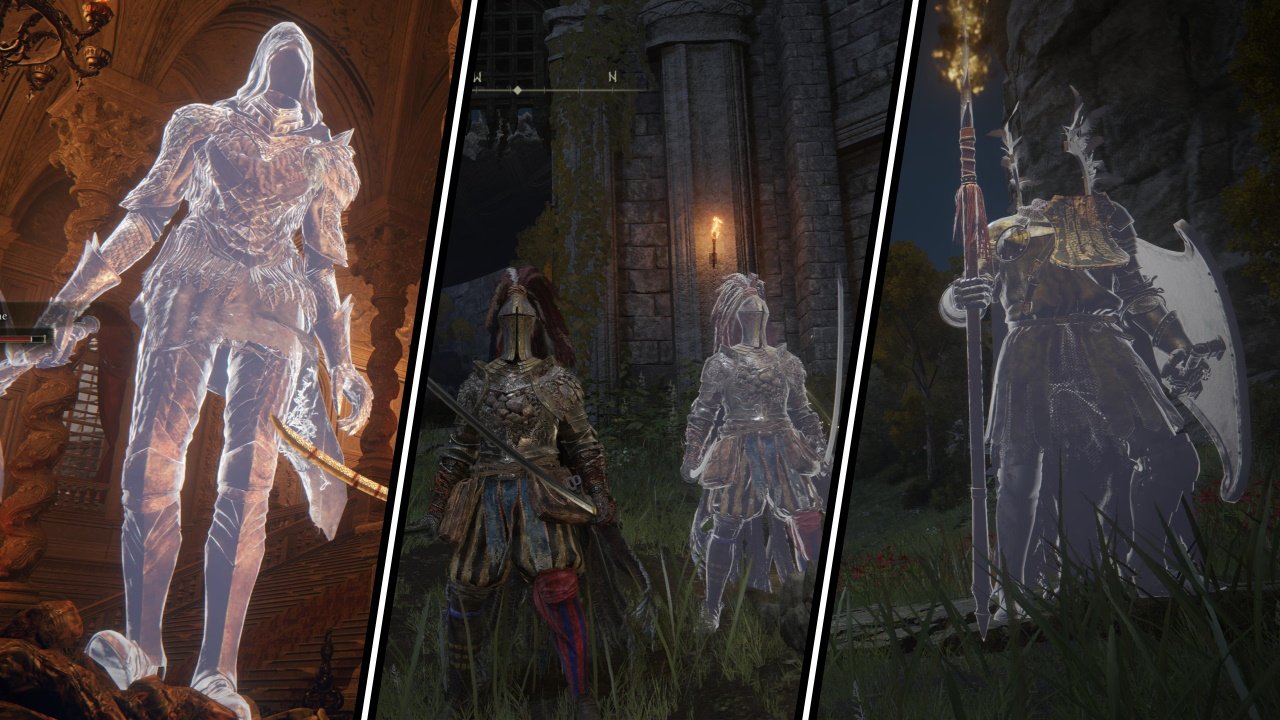 Peridot is the next mobile game from Niantic

Raise and breed magical creatures to save them from extinction.

The right Elden Ring Spirit Ashes are more than just a power to utilize; they’re your greatest ally against the brutally tough bosses and areas the game throws at you. There are plenty of great options available for the early game, but as you head to Elden Ring's late game of the capital and beyond, you might want to consider a change. In this guide, we’ve rounded up a list of the best Spirit Ashes for the late game in Elden Ring. Boost their levels and you’ll have stalwart allies to tackle any enemies and bosses you face.

There are explicitly best Spirit Ashes among those listed below, and we’ve done our best to include the top contenders right at the start. We’ve also, however, included a few more options which will prove useful for certain builds and niche scenarios. Variety may be spice for the living among us, but Spirit Ashes swaps are how us undying Tarnished get our fun. With that in mind, here are the best Spirit Ashes for the late game in Elden Ring.

At the time of writing, Black Knife Tiche is unequivocally the best Elden Ring Spirit Ash. One of Elden Ring’s Elite Spirit Ashes, Tiche excels at one-on-one fights thanks to her mobility and lifestealing capability. Her projectile attack drains enemy max HP, making her exceptionally useful against those with huge health bars. Tiche’s main weakness is her high cost and that she can prove unreliable at drawing aggro. Her AI will sometimes focus on dodging when you need her to attack.

To obtain Black Knife Tiche, you’ll need to have navigated through the Lake of Rot and beaten Astel, Naturalborn of the Void (we have a guide here) to reach the Moonlight Altar in Liurnia’s southwest corner. You can then earn her ashes by beating Alecto, Black Knife Ringleader at the Ringleader’s Evergaol. This is a tough fight, however, so make sure you prepare well.

The Mimic Tear remains one of Elden Ring’s best Spirit Ashes even following its debuff. Creating a duplicate of your current character, it’s capable of unleashing the same special attacks and powers as you, making it an incredibly adaptable companion. Before summoning, make sure to equip powerful consumable items in your quick use bar. Your Mimic Tear will also copy them, allowing it to use consumables such as Cuckoo Glinstone. If your own class is built for it, the Mimic Tear is brilliant at burst damage when attacking in conjunction with you.

To obtain the Mimic Tear, you’ll need to access Nokron, Eternal City after defeating Starscourge Radahn. Beat the Mimic Tear fight there and you can head south from the Ancestral Woods to enter Night’s Sacred Ground. While you head down through the rooftops and rooms of this area, you’ll find a Stonesword Key door. Pay the cost to access the chest containing the Mimic Tear Ashes.

Lhutel the Headless is available extremely early but remains effective into Elden Ring’s late game. While she won’t compete with the damage output of Black Knife Tiche or the Mimic Tear, she’s fairly tanky and can teleport, increasing her survivability. In addition, her lance attacks build the instant Death status effect. Overall, she’s a stalwart companion that’ll work effectively with almost any player build out there. Her biggest weakness is her AI sometimes spending most of its time teleporting rather than attacking.

To get this one of Elden Ring’s best Spirit Ashes, you need to complete Tombsward Catacombs in the Weeping Peninsula. Beat the Cemetery Shade lurking at the end to receive Lhutel’s Elite ashes as a reward.

If you’re looking for a tanky distraction rather than an all-out damage dealing, Ancient Dragon Knight Kristoff is one of the best out there. Equipped with a hefty shield, this Elite Spirit Ash can take more hits than pretty much every other summon out there. He also deals lightning damage which proves effective against many enemy types. Against large bosses he won’ get the chance to attack to often as his lack of maneuverability means they’ll repeatedly flatten him. The good news is that he can take the hits and then some.

To obtain Ancient Dragon Knight Kristoff Spirit Ashes, you need to complete the Sainted Hero’s Grave dungeon in Altus Plateau. It’s found west of Leyndell, by following the upper cliffs south from the windmill village. Be warned, the tomb is guarded by a Black Knife Assassin. It’s also close to the Champion’s Painting location if you wanted to collect that also. Be sure to grab the Prattling Pate Let’s Get To It located inside the dungeon as well.

The Dung Eater Puppet is one of the rarest Elite Spirit Ashes in Elden Ring, but also one of the best. A solid tank, he’ll inflict bleed on enemies he strikes, building up the status well for builds that also rely on it. He also curses enemies, reducing their resistance against various other status effects.

Obtaining the Dung Eater Puppet is highly convoluted. You’ll need to progress Ranni the Witch’s quest enough to meet Seluvis in the Three Sisters north of Caria Manor. When he gives you the potion to use on Nepheli, keep it instead. You then need to progress the Dung Eater quest until you meet him tied up on a chair in the Subterranean Shunning-Grounds underneath Leyndell. Here you’ll have the chance to give him the potion, cutting his quest short.

If Ancient Dragon Knight Kristoff has too high an FP cost or you want an alternate tanking option, the Greatshield Soldiers are easily one of Elden Ring’s best Spirit Ashes for pure caster builds. This summoned group of five soldiers will keep enemy aggro superbly and tank most attacks bosses can throw at them. Put them up front and you’re free to sling spells from afar in comfort.

The Greatshield Soldier Ashes can be obtained from a corpse within Nokron, Eternal City, accessed after beating Starscourge Radahn. Once you enter Nokron proper, head forwards and to the right, to find the graveyard on the map marked above. The ashes are found close to a Fallen Hawk undead enemy.

The Azula Beastman Ashes are the best Spirit Ashes for players aiming to melt a boss’ lifebar in as short a time as possible. This pair of aggressive beast soldiers dish out damage rapidly and batter through shields. The downside? They die extremely quickly. If you’re aiming to speedrun a foe and are comfortable keeping boss aggro on you, they’re a highly entertaining pair to throw into the mix. Just don’t use them if you prefer a more patient approach to combat.

To get the Azula Beastman Ashes, you’ll need to have reached Crumbling Farum Azula through the Mountaintop of the Giants. From the Dragon Temple Site of Grace, head west and drop down the platforms until you reach the bottom level. There’s a building you can head through to grab these Ashes from an altar.

For builds light on Mind, Stormhawk Deenh offers a lot of power for a very small FP cost. It’s a great partner to high-damage melee builds, as upon arrival it’ll unleash a screech which dramatically boosts the player’s damage for a short time. After that, the hawk is a mobile and aggressive partner, though its damage output is substandard when compared to others on this list.

You can get the Stormhawk Deenh ashes from the Chapel of Anticipation. Return to this starting area by accessing the Four Belfries in Liurnia. Once you reach the chapel, take the door and stairs on the right to access the upper balcony and grab the Ashes.

And finally, something a little different. Perfumer Tricia is a bizarre and niche addition to Elden Ring’s best Spirit Ashes that’s worth testing out just to see if she’ll work with your melee or faith build. Rather than attacking directly, she’ll make use of perfumes that can apply a powerful shield to the player or buff attack damage at the cost of speed. She’s a strange partner to most boss fights and absolutely demands practice to utilize well. But if you’re up for something different, give her a try.

To get the Perfumer Tricia Spirit Ashes, you’ll need to complete the Unsightly Catacombs dungeon in Mt. Gelmir, as marked above. The end boss of the dungeon is a pairing of Perfumer Tricia and the Misbegotten Warrior, giving you some indication of how she likes to do battle. Best the duo and you’ll get her as a summon.

Those are the best Spirit Ashes for the late game in Elden Ring that we’ve tested. If you’ve got your own suggestions, however, feel free to share them in the comments below.For more Elden Ring content, read our roundup of secrets you might have missed.