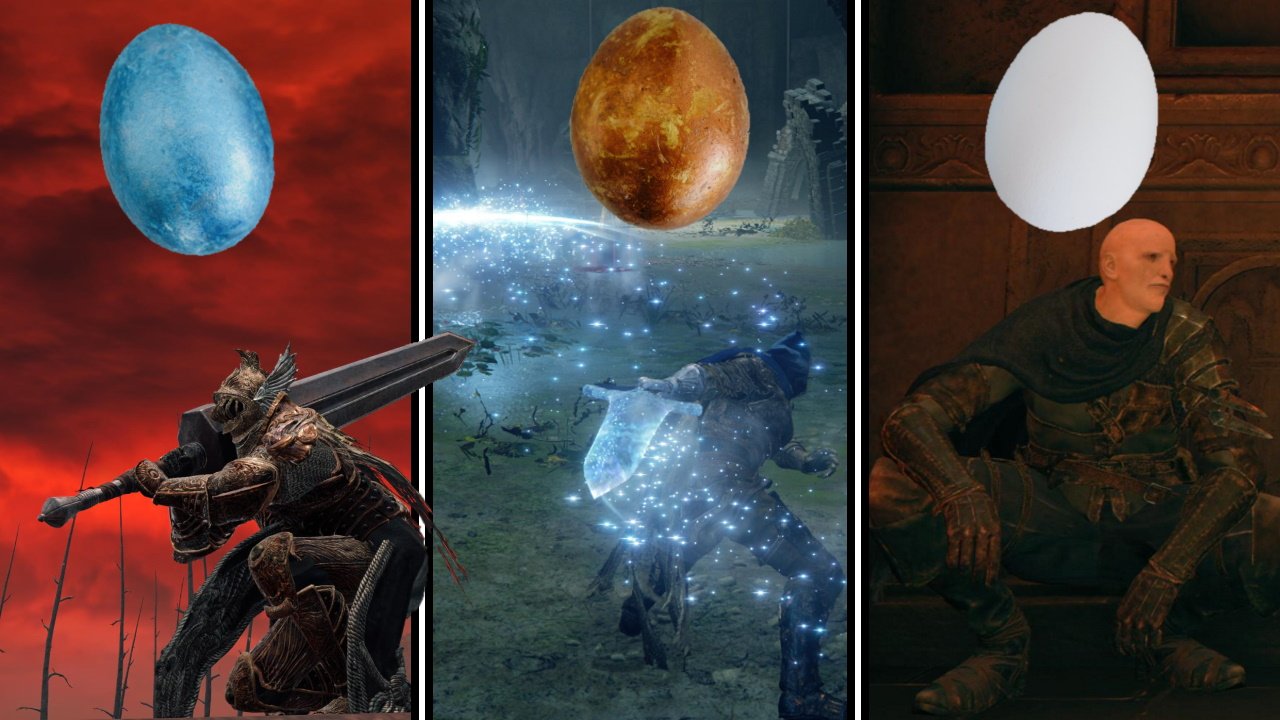 Do not eat eggs imported from Caelid. It doesn’t matter how tasty they look – the birds in that place are definitely not laying anything healthy. Fortunately, our roundup of Elden Ring Easter Eggs below will keep you sustained in a way those creepy corvids can’t. Here are six hidden treats in FromSoftware’s epic open-world spin on the Soulsborne formula that you might not know.

Elden Ring might not share the Dark Souls name, but its heritage is plain as day. The lifeblood of developer FromSoftware flows plainly through more than just the core mechanics. One obvious nod to the series' past lies in the Moonlight Greatsword. A powerful weapon granted only by completing Ranni the Witch’s questline, the Moonlight Greatsword is actually a series staple.

Variants of this giant, glowing blade have carved an arc through enemies in the entire Dark Souls trilogy, their precursor Demon’s Souls, Bloodborne, and even the Armored Core games. Its true lineage, however, dates back even further. The first appearance of this lunar life taker is in 1994 first-person RPG, King’s Field. Back then, the Moonlight Sword was a mighty translucent blade built to take down the game’s main antagonist. Nearly 30 years later, it’s fair to say that its boss-slaying tally has gathered quite a few extra notches.

Of FromSoft’s core releases, only the starkly different Sekiro: Shadows Die Twice has eschewed inclusion of this classic weapon. A shame, really, as it would have come in handy when taking down that pesky giant snake.

Blades aren’t the only recurrence in FromSoftware games. The studio is also fond of bastards – one in particular. Patches can be found in Elden Ring by exploring Limgrave’s Murkwater Cave. After calling you out for attempting to steal his goods, he’ll make a half-hearted attempt to start a boss battle before calling it quits and begging for mercy.

Along with setting up a shop, Patches makes quite a few appearances throughout Elden Ring’s world. You can even summon him as an ally for the Radahn boss fight, though he nopes out before even landing a blow.

The incorrigible scamp (or insufferable backstabber, depending on your viewpoint) made his first proper appearance in Demon’s Souls as Patches the Hyena, where he lures you into an enemy ambush and kicks you down a hole. Returning in Dark Souls, he drops a bridge from under you and, yes, boots you down a hole again. And in Dark Souls 3, Patches locks you in a tower, steals your friend’s armor, kicks them down a well, and then drops a bridge from under you. Remind us why we like this guy again?

Patches has even popped up in Bloodborne and the Armored Core series. Quite the well-traveled traitor indeed. He’s been consistently voiced by the distinct William Vanderpuye, whose tones can be enjoyed in far more savory form thanks to children’s TV shows like Rastamouse, Apple Tree House, and Octonauts: Above & Beyond.

How much impact George R.R. Martin actually had on Elden Ring’s world is up for debate, but one thing the author has categorically spoken out about is that he didn’t name everyone after his initials. But no matter how much the Game of Thrones author might protest, we still find it a little suspicious that so many of the main characters in Elden Ring start with a G, R, or M.

From the tops of our heads, we can think of Godrick, Godwyn, Godfrey, Ranni, Rennala, Radahn, Roderika, Rogier, Rya, Marika, Margitt, Melina, and Melania. We’re almost certainly forgetting a few there, too. So while Martin might not think anything is up, we wouldn’t put it past FromSoftware to have filled the game with such a confusing concoction of Gs, Rs, and Ms to navigate just for a laugh.

Even if our initial theories are incorrect, that doesn’t mean Elden Ring is free of any sneaky nods to the Game of Thrones author. Defeat the Leonine Misbegotten boss in the Weeping Peninsula’s Castle Morne, and you’ll earn the Grafted Blade Greatsword as a reward.

It's a hefty weapon, demanding a whopping 40 Strength to wield. All that weight appears to come from the fact that the sword is actually a cobbled together mess of smaller blades. Pointy in every direction, it’s not unlike a certain throne made famous in Martin’s A Song of Ice and Fire series.

We’re not convinced that a sword made of swords would actually be more effective than a traditional blade. But then again, Elden Ring also lets us run around blowing deadly bubbles out a trumpet if we so please. There’s something for everyone, but especially if you’re a Game of Thrones fan.

5. A blast from British TV past

Okay, so this is less of an Easter Egg than an amusing connection for British fans. Elden Ring features a very welcome wealth of accents from across the UK and Ireland. For players from the area, many of those voices will seem oddly familiar.

The reason is that in choosing their leading voice cast, FromSoftware seems to have actively scraped through the archives of classic UK TV and Radio. It’s hard to find a single actor in Elden Ring that hasn’t, at some point, appeared on one or more of Casualty, Holby City, The Bill, Coronation Street, or EastEnders.

Godrick becomes a far less imposing boss when you realize he shares a voice with five different patients from the local Accident and Emergency department. We’ve yet to see the one where surgeons have to remove a grafted dragon arm, mind.

Elden Ring director Hidetaka Miyazaki has never been shy in his love of long-running manga Berserk. The Dark Souls games have drawn numerous inspirations for weapons, enemies, and characters established in the manga, and Elden Ring is no exception. From armor designs to NPC poses, the game is rife with homages to Beserk’s brutal world.

The most obvious of these is the mighty Greatsword. Despite the rather unassuming name – by Elden Ring’s standards, anyway – this gigantic Strength-based blade is a clear nod to the weapon of choice for Berserk protagonist Guts. You’ll also see the blade leaning on the wall behind Blacksmith Hewyn, who in turn bears resemblance to Berserk’s grumpy master smith Godo. The Greatsword and Guts’ famous Dragon Slayer are far from identical, but the manner in which your character rests the oversized slicer easily over one shoulder is unmistakable.

Those are all the Elden Ring Easter Eggs we know of, but have you spotted anything else? We’re sure there are more references lurking somewhere in those item descriptions. Share them with us in the comments below. And if you're interested in more in-game secrets, here's our roundup of hidden mechanics and systems you probably haven't spotted!