Fortnite developers Epic Games are working with Lego to shape the metaverse into a 'safe and fun' place. 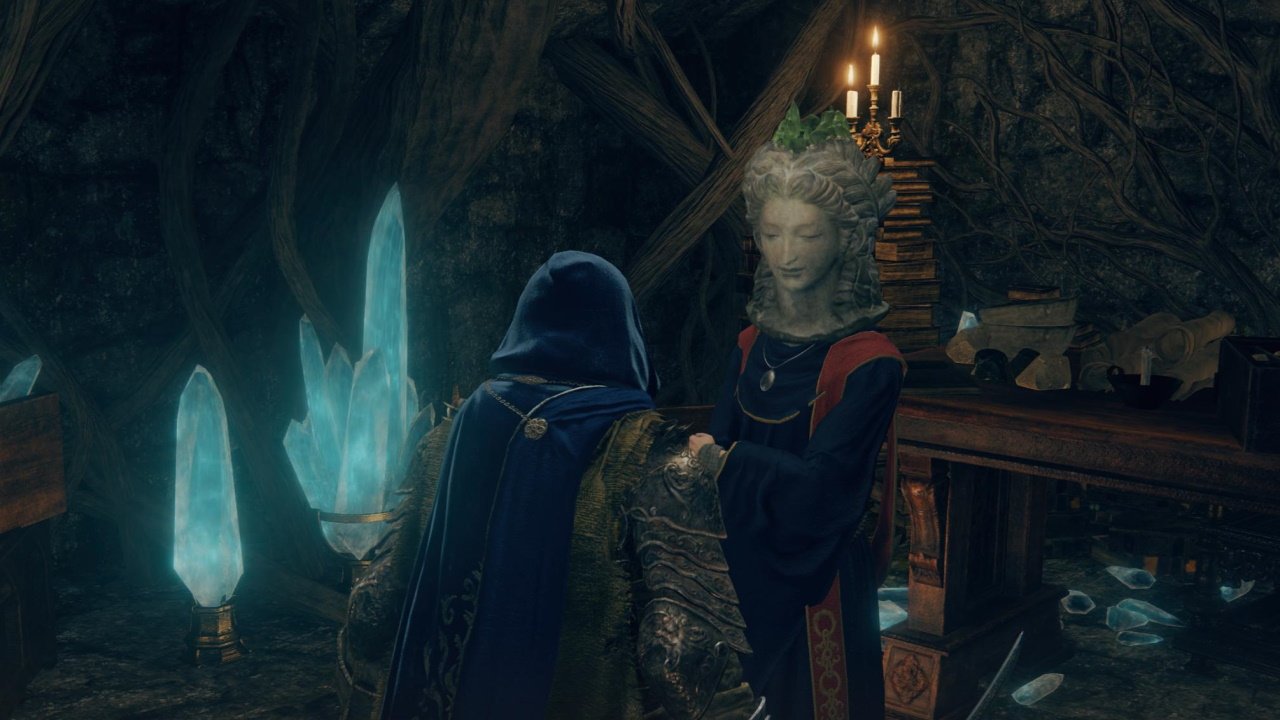 Returnal wins big at the 2022 BAFTA Games Awards as indie releases see success in many categories.

The Elden Ring Sorceress Sellen NPC questline is one of the most intriguing stories you can uncover. Sellen can be met in the opening hours of the game and her tale has hints hidden in places like Witchbane Ruins or during other NPC quests quite early. Sorceress Sellen’s story, however, won’t play out until you explore some hidden locations in the end reaches of the map. Our Sorceress Sellen quest guide will walk you through how to start this academy exile’s quest. We’ll teach each of the key steps required to complete Sorceress Selen’s quest in Elden Ring.

An exile from Raya Lucaria Academy, Sorceress Sellen’s aim is to study primeval sorcery and restore Raya Lucaria Academy to studying its ways. She’s an excellent early merchant, but sign up as her pupil and you can not just learn sorceries, but also help her achieve her goals.

Where to find Sorceress Sellen

You can first find Sorceress Sellen in a dungeon below Waypoint Ruins. The crumbling structure is filled with poisonous plants, but if you sneak down the stairs within, you’ll encounter the Mad Pumpkin Head boss. Best them and you’ll reveal Sorceress Sellen studying in a small chamber beyond the Site of Grace.

To start her quest, you’ll need to say accept her offer to study sorceries. She’ll inform you that she’s an outcast, but that’s about everything you’ll learn thus far. You can bring any sorcery scrolls you find, like the Royal House Scroll, to Sellen to expand her available wares.

Explore Witchbane Ruins in the Weeping Peninsula and you can also discover a version of Sorceress Sellen chained to a wall. Speaking with her won’t offer much dialogue, but as you might be able to guess, this location will be important much later. You can purchase the following spells from Sellen:

Sorceress Sellen gets a brief cameo as part of Ranni the Witch’s quest, accessed beyond Caria Manor and the Royal Knight Loretta boss fight in Liurnia. When tasked with figuring out how to access Nokron, Eternal City, you’ll visit Preceptor Seluvis who sends you to Sellen with a letter of introduction.

Seluvis, it turns out, helped Sellen out with troubles at Raya Lucaria in the past. Handing the letter over to Sellen will see her inform you that Starscourge Radahn must be defeated before you can access Nokron. You won’t progress Sellen’s quest any further, but the connection to Seluvis is an important one to remember

Sorceress Sellen’s quest will only get started once you visit Mt. Gelmir north of Liurnia and the Altus Plateau. Head through the path underneath Volcano Manor, past the lava lake, and you’ll eventually reach Hermit Village.

Fight through the location shown on the map above and beat the Demi-Human Queen boss. You can then find the sorcerer Azur sitting on the cliff edge to the north. Growing crystals on his shoulders, Azur is bareful capable of movement, and won’t even speak. What he will do is hand over the incredibly powerful Comet Azur sorcery. Should Azur's state be a warning as to the path Sellen is treading? Maybe, but that's a dang fine sorcery he's given you too.

Once you’ve spoken to Azur, return to Sellen and choose the new dialogue option relating to him. Sellen will ask you to track down another sorcerer, Lusat. She’ll give you a special key and direct you to find him near Sellia, a town of sorcery in Caelid to the east. If you haven’t been there already, we have a guide to solving the Sellia barriers and flames puzzle here.

Sellia Hideaway can be found northeast of Sellia, town of sorcery. Follow the path up and around, past the Church of Plague which holds the NPC Millicent who needs the Gold Needle. By the cliff wall to the north are a number of graves and a single beefy mage. Take him out, then attack the cliff wall at the spot marked above to uncover a hidden wall into Sellia Hideaway.

This crystal-packed dungeon leads to a boss of three Crystalians, but finding Lusat requires you drop down the second large chasm ahead of this fight. Make your way down the large crystals and you’ll find a blue barrier guarded by a single sorcerer. Interact with the barrier and you’ll use the item Sellen gave you to gain access. Within lies Lusat. What’s left of him, anyway. Half melded with crystals, he’s unable to speak and seems to be barely cognizant of the world around him. Talking with him will reward the Stars of Ruin spell.

To progress Sellen’s quest further, you’ll need to have beaten Starscourge Radahn through Redmane Castle. Once he’s bested, return to Sellen and she’ll explain that her present form is only a projection. She’ll ask that you visit her real body at Witchbane Ruins in the Weeping Peninsula.

Head down the stairs at Witchbane Ruins to find Sellen shackled to the wall at the back. Speaking with her will see her entrust her Primal Glintstone to you. Effectively her essence, Sellen’s Primal Glintstone can be used to transfer her mind into another body.

If you haven’t already spoken to Witch-Hunter Jerren at Redmane Castle following Radahn’s defeat, you’ll need to return to the throne room and speak with him there, exhausting his dialogue. Once done, return to Witchbane Ruins and you’ll find Witch-Hunter Jerren there having slain Sellen. Fortunately, you’ve already got her essence in the Primal Glintstone.

Seluvis’ dungeon and a new body

The next step of Sorceress Sellen’s NPC quest requires finding Preceptor Seluvis’ hidden chamber in the Three Sisters area behind Caria Manor. At the position marked above is an illusory floor guarded by a single undead mage. Strike the stone floor to reveal the path and head down to find a hidden chamber filled with Seluvis’ puppets.

At the back of this room, to the left of the message by Seluvis, is another illusory wall. Behind this is a puppet seemingly identical to Sorceress Sellen. Interact with it to place Sellen’s Primal Glintstone within the body. This will revive Sellen, leading her to ask you how long it’s been. She’ll express her desire to return to the academy and continue her work.

Just outside the entrance door by the Raya Lucaria Grand Library Site of Grace will be two summon signs. One will let you challenge Sorceress Sellen on the side of Witch-Hunter Jerren. The other will let you aid her against him.

If you kill Sorceress Sellen, you’ll earn the Witch's Glintstone Crown and Sellen's Bell Bearing. Jerren will then grant you an Ancient Dragon Smithing Stone as a reward close to his summon sign.

Side with Sellen, however, and you can continue her quest. You’ll earn the Eccentric Set from killing Jerren and will be able to collect the Glintstone Kris dagger by speaking with Sellen repeatedly afterwards. She’ll also add Shard Spiral to her shop.

Sellen will replace Rennala at the heart of the library, saying that the school can now hone the primeval current thanks to the return of Azur and Lusat’s bodies. Sellen will bid you to become the Elden Lord, swearing the allegiance of the entire academy and saying that you’re welcome to visit her in future.

Don’t worry if you were hoping to respec your class, as the replacement won’t be permanent for poor old Sellen.

The end of Sellen’s quest

So long as you visited Lusat earlier to obtain the Stars of Ruin sorcery, Sellen will unfortunately meet a swift end. Once you rest at a Site of Grace, you can return to find Rennala returned and Sellen transformed into a ball of Glinstone crowns.

Sellen is only capable of uttering a couple of uncomfortable words, but she still retains her ability to sell sorceries. You’ll also collect the Witch’s Glintstone Crown from close by. Seems it won't fit on her head anymore, or perhaps that should be heads. After witnessing Sellen’s transformation, you can then return to Azur and Lusat’s locations to gather their respective armor sets.

That’s all there is to know about Sorceress Sellen’s quest in Elden Ring. It comes so close to offering a positive ending to your exiled friend, but sadly reaching for boundless knowledge never ends well for anyone in FromSoftware’s worlds. For more quest guides including how to unlock an alternate ending, take a look at our breakdown of Fia's quest in Elden Ring.