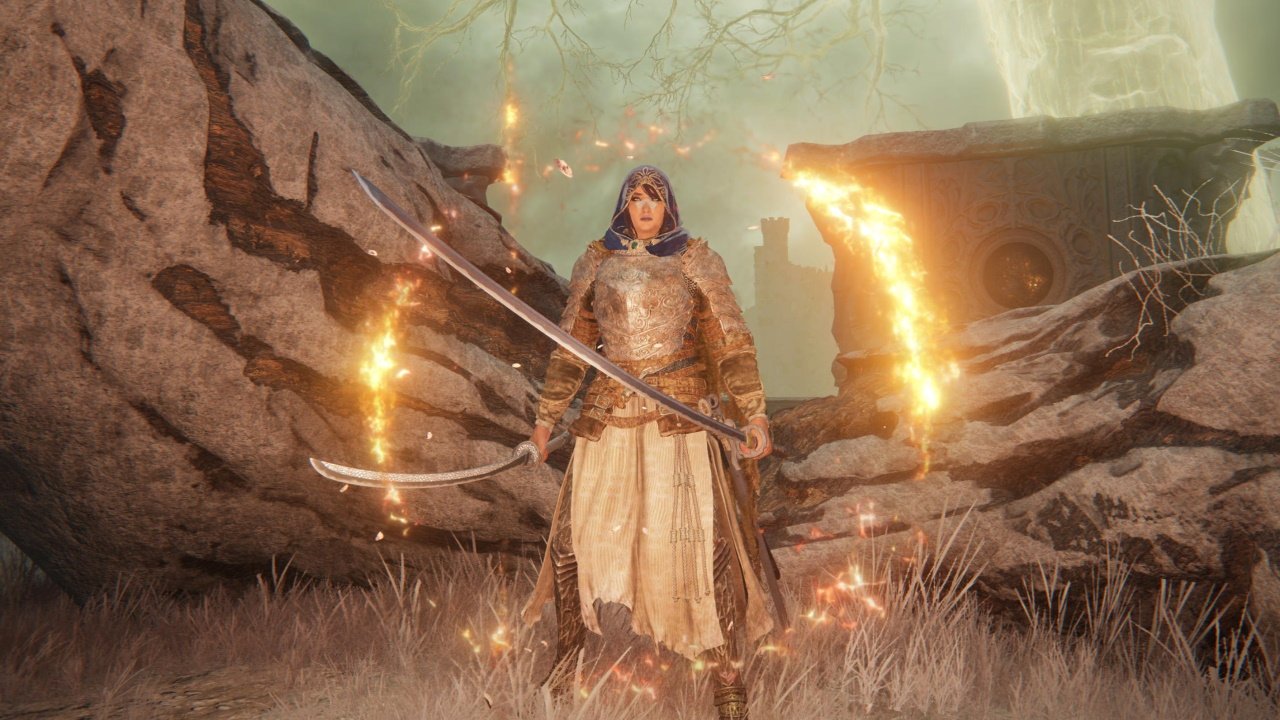 Don’t worry, we’re not just here to lie to you about a hidden path ahead. Elden Ring has plenty of illusory walls, sure, but we’re talking about a different kind of secret. After 80+ hours, we’re still being surprised by tiny details or interactions we’d completely overlooked while exploring the game’s gargantuan (and seemingly ever expanding) map. Here are X cool secrets you might have missed in Elden Ring.

Elden Ring secrets and systems you might have missed

Your Tarnished might not need to worry about dropping a toaster in a bathtub, but they’d still do well to remember that electricity and water make for a bad combination. The type of weather, you see, affects the resistances you’re currently rocking.

On a rainy day, those sodden clothes will drop your protection against lightning significantly. Your fire resistance, conversely, shoots up as things get damp. The same applies while standing in water, and those hit by lightning will even emit a small aoe ring. In short, it’s probably best not to try fighting the draconic tree sentinel in the middle of a downpour. We’re not after that kind of electric relationship, sorry bud.

Here's another one that isn't clear at all to newcomers. You'll see golden leaves falling all around you on some nights while out exploring the world. When this effect is present, you'll also see your character seemingly boosted, with some kind of golden light shimmering upwards around you. During this period, you'll gain a boost to the number of Runes earned any time you defeat an enemy.

If you enter a shared password in the game's multiplayer menu, you'll also trigger the effect anytime someone with that same password defeats a shardbearer or completes the game. As such, it's hugely beneficial to look up some of the larger group codes online to boost your Rune income.

3. Portraits of the sages in Raya Lucaria Academy

Elden Ring has a thing for paintings. There are grand depictions of warriors all over the shop, and even magic directions that’ll point you toward items. Some of the coolest touches, however, are those hidden in the background. Throughout the magical university of Raya Lucaria, you’ll find Glintstone heads which can be equipped to boost various stats and sorceries. Take a look at the walls of the Debate Parlor after beating the Red Wolf of Radagon, and you might see some familiar faces.

An array of pictures along the walls depict the presumably famous Glintstone scholars of the academy. There’s one for each hat you can find, and it reveals that the uncomfortably double-faced Twinsage Crown is actually intended to represent two separate people. What happened to these mages? Given the various hideous glintstone amalgamations you’ll encounter around the world, it’s probably best not to dig too deeply.

4. Margit’s Shackle has some extra uses

If you visited Patches in his early Limgrave home, you may have picked up Margit’s shackle to make that early Stormveil boss fight a touch easier. Sure, the item comes in handy again when Margit shows up for revenge, but it also has some other unexpected uses. Slapping Margit’s Shackle on the ground will reveal any nearby illusory walls, as well as triggering those pesky fire pillars – useful when exploring underground tombs.

This likely isn’t an intentional use but a side effect of the ability creating a zero-damage AoE attack within its range. Still, it saves smacking seven walls after every  “hidden path ahead” message you read. And yes, we know you’re still doing that.

5. The reason for these tiny totems

Ever noticed these tiny stone totems sticking up from the ground? You may have even seen a few with “if only I had a giant but hole” jokes and laughed/despaired at the Elden Ring community. They do have a purpose beyond jokes, mind. Those totems signify a connection to the dead and the areas in which you can summon Spirit Ashes to aid you. You don’t really need to see them, as the blue gate symbol on the screen indicates the same effect. But still, it’s nice to have an in-world connection to the ability.

Latenna is already a pretty unique Spirit Ashes summon. She’s found through an easy-to-miss dungeon in western Liurnia, and comes with her own quest line to follow. Like all the albinauracs you’ll encounter in the nearby village, Latenna has lost the use of her legs, meaning her summon will sit in place while firing off magic arrows instead.

Unless, that is, you summon her near a wolf. As the Elden Ring community found, in this rare circumstance, Lattena can actually mount one of your canine enemies, transforming her into a deadly mobile archer with extra attacks. It’s a link to her fallen companion Lobo, but such an odd and specific occurrence for one of many Spirit Ashes that most players are unlikely to ever trigger it unintentionally.

There are several sneaky takedowns for some enemies that the majority of players will simply never encounter. One of the rarest and most satisfying it for the fire-spewing head chariots which litter regions such as Caelid and the path to Raya Lucaria. Sure, you can sneak around and smack the fleshy person hiding in their back, but there’s also a far more dramatic way to take them out.

Leap from above and it’s possible to damage theses devices’ exhaust fumes with a plunging attack. Get it right, and the result is a dramatic explosion that’ll knock out anything else in their vicinity. Useful? Not really. But let’s be honest, these obnoxious hot air machines deserve some payback. There’s even an in-game merchant note that’ll clue you in to the takedown, though

Overloading enemies doesn’t stop there, either. Those poison-pumping land squirts which group up in any large patches of water? Striking them with extra poison will push them over the limit, causing them to explode in a gaseous cloud that’ll likely trigger any of their nearby friends. The same applies to the rot land squirts in Caelid. It’s an oddly satisfying thing to watch, but we’d recommend doing so from afar.

8. Cursed enemies are hurt by heals

While we’re on the topic of dealing damage, did you know that Elden Ring’s cursed enemies are injured by healing? Use any AoE incantation for healing against the insidious crawling foes in Liurnia and beyond and you’ll severely injure them. Faith healing finally serves a purpose beyond multiplayer!

We've left this secret until last as it's a bit of a story spoiler for one aspect of Elden Ring's lore. If you're looking to go into everything without prior info, skip ahead now. Happy to delve into the dark? Be warned, madness lies ahead. Elden Ring's Nomadic Merchants are an odd lot. Often found hidden away in unusual corners, they're a reclusive bunch. The first you're likely to meet, Kalé, will warn you against attacking one, as they'll all aggro against you. Make that mistake and you'll find the merchants unleash attacks centered around madness and frenzied flame.

Those who venture to the depths of the capital, Lleyndell, may find the hidden path to a chamber in the depths. Within is a wealth of bodies which look suspiciously like our merchant pals. This is the path to the three fingers, and the way to obtain the Frenzied Flame ending to the game. So why are the merchants here? Obtain the Mechant set hidden within and you'll be given an uncomfortable clue:

"These merchants once thrived as the Great Caravan, but after being accused of heretical beliefs, their entire clan was rounded up and buried alive far underground," the description reads. "Then, they chanted a curse of despair, and summoned the flame of frenzy"

In short, those chilled out merchants were all rounded up and buried by the leaders of the land. Doing so led to the summoning of a terrifying deity which then threatens to engulf the entire land. Did the merchants follow the three fingers before being buried? Are the ones above ground escapees or spies? Do they still support the Frenzied Flame or are they attempting to escape it with a quiet life? These greater questions, we leave to you.

Those are all the Eden Ring secrets that we've found so far, but we're sure there's more to appreciate out there. Have you found anything worth sharing? Comment below to teach our Tarnished a thing or two.