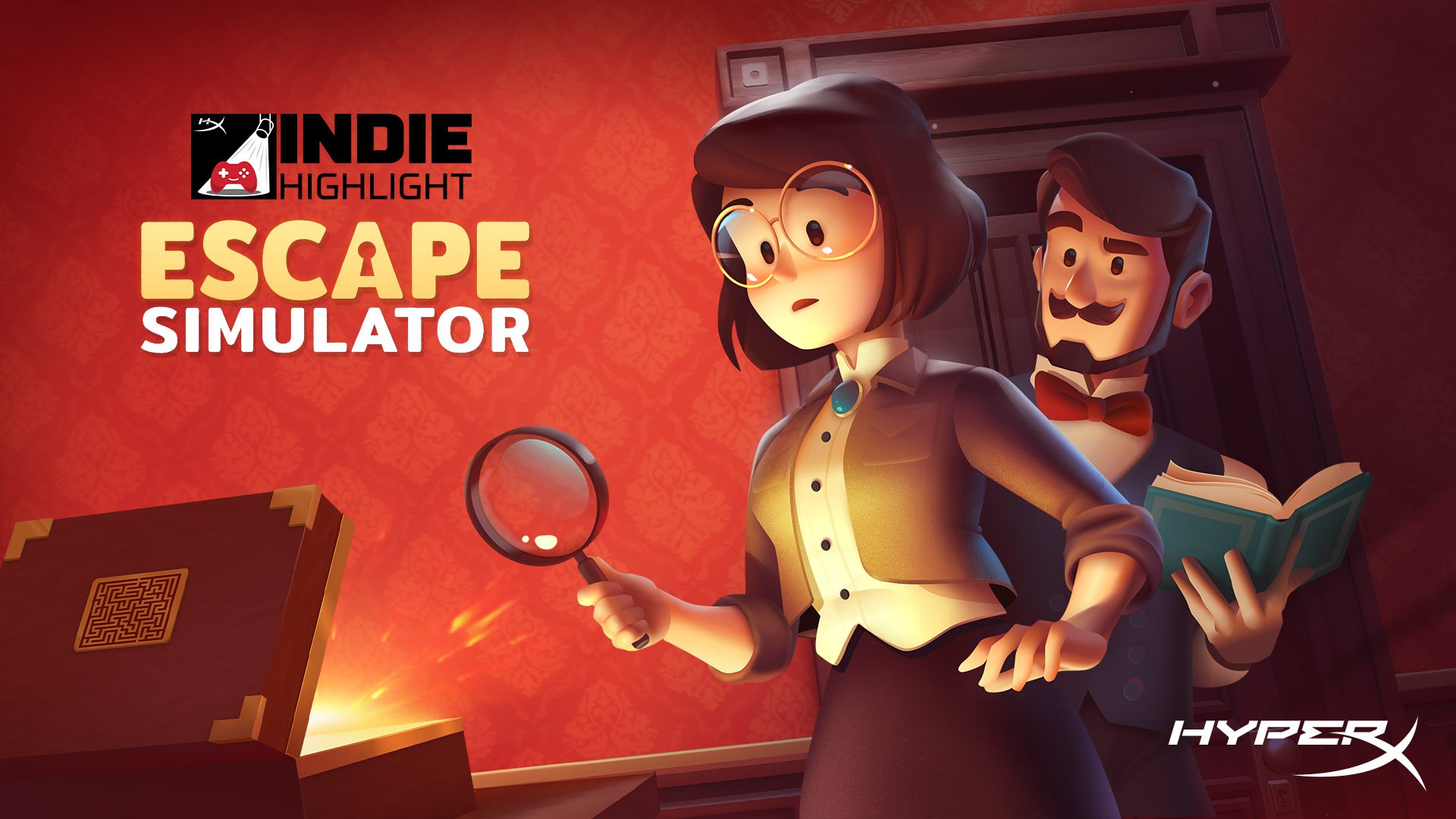 The folks at the Croatian-based Pine Studios describe themselves as “obsessed with crafting awesome puzzle games,” and one look through their catalog confirms that obsession is real! This month in the HyperX Indie Highlight, we’ll be taking a look at their latest title, Escape Simulator, a game that condenses all the fun experience of an escape room into your PC.

With over 20 devious rooms full of perplexing puzzles for you to solve on your own, or with a squad of friends, Escape Simulator seeks to solve a puzzle that has confounded many an escape room aficionado: “How am I gonna get a group of friend together to go to an escape room with me?”

Once you’ve overcome all the machinations of the base game, you can either try your hand at being an escape room designer yourself, and make your own room in the game’s Workshop, or you can attempt to solve the fiendish inventions that the community have uploaded to the Steam Workshop.

If you’re an adventure gamer or escape room fan looking to scratch the itch in your brain that can only be soothed by solving a clever puzzle, Escape Simulator may be right up your alley (you might even see some super cool gaming gear and PC peripherals in the game, wink emoji, wink emoji). After trying to make our way through several of the rooms, we sat down with Pine Studios to get some hint—er, questions answered.

AG:What prompted you to take escape rooms back to their digital roots?

As fans of the puzzle game genre, what are some of your favorite puzzle games of all time?

Our team loves puzzle games! The Myst games were huge at the time, with a great feeling of mystery about them. We’re also fans of adventure games like Grim Fandango and the Monkey Island series. The Room series were great, as was Portal. Basically anything with puzzles!

What’s your favorite room or setting in the game?

For me personally, it’s Egypt. We like to research the themes before making a room, and everytime an Egyptian theme comes up it’s really popular with puzzle solvers. A lot of people enjoy the feeling of adventure, or find it mysterious or a bit exotic, like somewhere you might meet Lara Croft on an expedition. The music also really helps create a rich atmosphere - altogether this is why we decided to make it the theme for the first level in Escape Simulator. The pyramids were full of secret rooms, doors, buttons, and so on, so it made sense as a setting for a puzzle game.

What was the QA process for this like? Did you have a tester that was particularly proficient in breaking the intended logic of the puzzles?

Our first testers were Pine Studio teammates. We’ve made a lot of puzzle games so it made sense to test things internally first. Everyone on the team played through rooms and gave a review. Once we were happy with the puzzles, the next step was testing with the community. We shared it with our Discord full of the people who played our previous games. It’s a hardcore puzzle community, so they had really helpful comments. It helped us a lot with the puzzles and feedback. After that, we did an open beta with ‘regular’ gamers.

In your mind, what’s a benefit Escape Simulator has over a real world escape room?

There’s a few benefits. First off, in real escape rooms there are limits to what you can do. You’re not allowed to throw stuff around and break things! In Escape Simulator you absolutely can do that and find items that way. Some things in the game, like a room with zero gravity, are hard to do in real life. There’s more options to play with.

The second advantage is locations. You can have your escape room in a pyramid, or a space station. Players can explore some wonderfully interesting places.

Third thing is that the game offers a digital space for people to hang out and solve puzzles together. This is helpful for friends who might not be able to meet up often in real life, but it’s also been a real boon for a lot of people in hard times like during the corona pandemic.

Have there been any community-created rooms that stood out to you?

Our community has made more than 3000 rooms so far, and a lot of them stand out - they’re really creative! The most recent one I played was Develish Diorama – a super cool concept where you play with a miniature version of the room and it changes the full scale room at the same time.

I'm a big sudoku fan and there have been some nice rooms based on that concept. It’s also possible to do different vibes as well – Little Emily is a horror room, made by one of the best designers out there, Cico.

If you were to make another setting for the base game, what would you like it to be? The future? The past? An entirely different video game?

Right now we’re working on a special room that pays homage to one of our previous projects. We also have some other exciting themes that we’re playing around with and hope to be able to reveal very soon!

You can pick up Escape Simulator on Steam for 20% off until April 4 and try your best to design the ultimate escape room game!