The best Elden Ring Talismans for the early game and beyond

Here are the best Elden Ring Talismans to grab early to suit your playstyle. 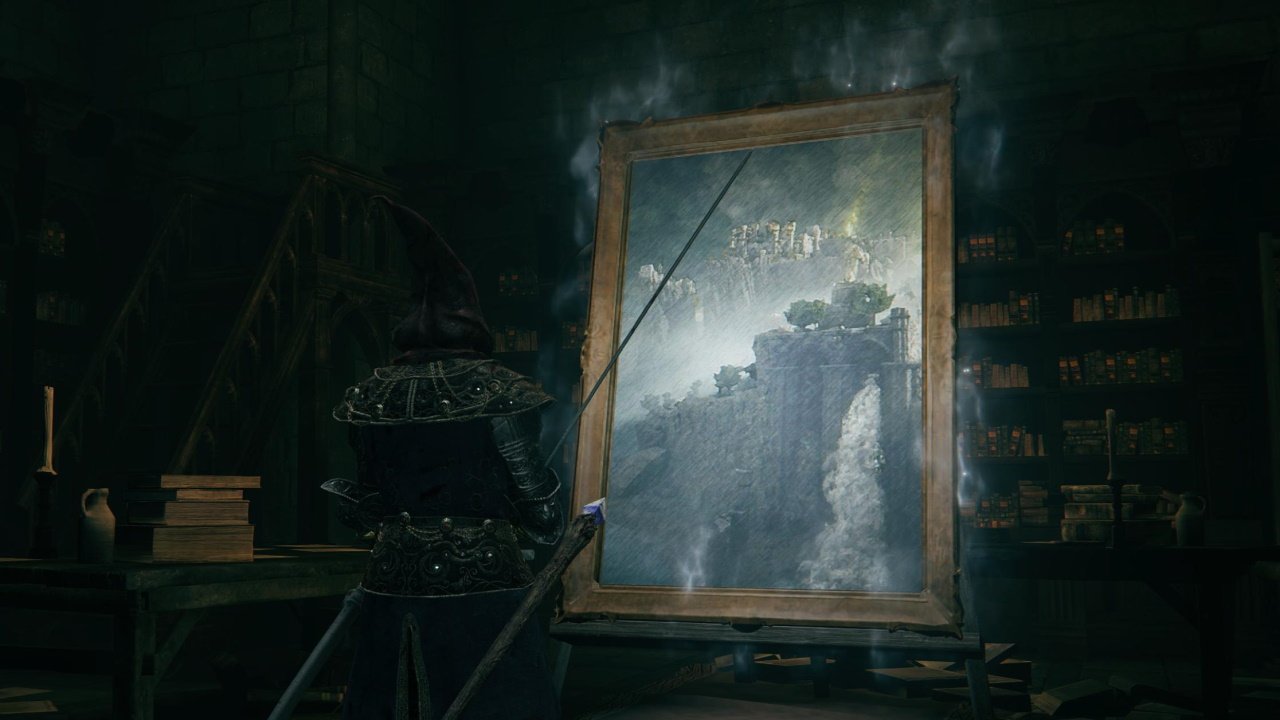 A new horror game from the makers of Until Dawn and The Dark Pictures Anthology.

The Homing Instinct painting was captured southeast of the First Steps Site of Grace and northwest of the Seaside Steps Site of Grace, as shown above. There’s a small grave here with the broken arch ahead of it. Approach the grave and a spirit will appear before fading, dropping the Incantation Scarab as a reward. This headpiece reduces the FP cost of incantations but increases damage received.

Found in a side room of Stormveil Castle's main courtyard, the Prophecy painting shows a rising landscape with a castle in the distance. The nearest Site of Grace is the Liftside Chamber, and you'll need to head past an ogre enemy to reach the small room containing the painting.

The Prohpecy painting was captured at the northern edge of the Weeping Peninsula in south Limgrave, just north of the Church of Pilgrimage. Head out and north from the church looking along the cliff's edge to the left until the ghost appears and points at the castle in the distance.

The Limgrave Artist’s Shack is found on the east side of the lakes, reached by following the Liurnia Highway North’s right fork all the way to its end. Find it on the cliffs just west of the Study Hall Entrance Site of Grace. The location of the Liurnia Artist’s Shack painting, however, is much further north.

The Resurrection painting location is beyond Caria Manor in Liurnia’s northwest. You’ll need to fight through the area and beat Royal Knight Loretta to access the grounds behind the manor. Head right and past the Behind Caria Manor Site of Grace before traveling south to reach the graveyard shown above. Look for the southernmost stone segment jutting from the ground.

The view of Raya Lucaria should be clear here, and the ghost will spawn close by on the southern side before dropping the Juvenile Scholar Cap, Juvenile Scholar Robe, and a Larval Tear. That last item is a vital one, as it will allow you to respec your character by visiting Rennala after you beat her boss fight in Raya Lucaria Academy.

The Caelid painting doesn’t actually have an artist’s shack, presumably because it would have been scorched to the ground. Instead, this painting is in Sellia at the top of the stairs up from the swamp/Crystal Mines. Look to the right of the stairs for a collapsed building with several enemies digging around. The Redmane painting can be grabbed under a small porch at the back.

The Redmane painting points to a location close to the Minor Erdtree in Caelid’s northeastern Dragonbarrow region, as marked on the map below. You’re looking for the spot just to the left of the Ulcerated Tree Spirit where you can drop off the cliff edge to land on a ledge below. We highly recommend jumping off with Torrent, as this will allow you to double-jump and adjust course if you miss the platform.

Look towards the castle in the distance with the broken pillars in front and you should find a spirit which will fade to drop Ash of War: Rain of Arrows. This is a handy ability for the few archers playing Elden Ring, as it’ll call down a barrage to bombard foes at range.

The Champion's Song painting is found within The Shaded Castle in the north of the Altus Plateau. It's the same place you'll pick up the Valkyrie's Prosthesis needed for Milicent's quest. The location it points to is close to the Rampartside Path, southeast of the minor erd tree. If you follow the path south from Dominula, Windmill Village, you'll eventually reach the Sainted Heros grave (a large statue-topped structure with a Black Knife assassin out front). This is the structure seen in the image.

Head east and up the hill to find the Champion's Song painting location on the higher rocks looking north toward the minor erdtree and Mt. Gelmir, as marked below. Be warned that Ancient Dragon Lansseax will appear in this area if already defeated near the Abandoned Coffin Site of Grave. Avoid drawing its attention unless you're eager for a fight. Find the spirit and you'll be able to grab the Harp Bow as your reward.

The Flightless Bird painting is found in the western side of Leyndell, Royal Capital. You'll need to explore the ground floor of the Fortified Manor that's a copy of Roundtable Hold (or is it the other way round?). The Flightless Bird painting location is in the northeast of Altus Plateau. The closest Site of Grace is Windmill Heights, which requires you to have fought the Godskin Noble in Dominula, Windmill Village.

From the Windmill Heights Site of Grace, head southeast to the raised platform with a group of dancing women. There's a rock to the left of the building here nearby and you can look toward the capital gates from the grass next to it, matching the painting. Approach this spot and the spirit will appear before vanishing. It'll leave behind the Fire's Deadly Sin incantation which sets the character and surrounding area on fire.

The Sorcerer Painting is found within Castle Sol. It's found on an out-of-the-way path which can be reached a couple of ways, most easily by dropping off the ledge before the Commander Niall boss fight room and following the path round on the lower level. Once you climb down a ladder you'll be able to find the Sorcerer painting glowing inside the room.

The Sorcerer Painting location is southwest of Castle Sol, up on the bridge which travels south from the higher cliff. You can see the location marked in the image above. Ride west from Castle Sol and the south up the path until you reach the bridge. The painting spirit will materialize on the first lip sticking out to the east from the bridge. It will leave behind the Greathood headgear. This comically large hat will boost both Intelligence and Faith at the cost of total HP.

Those are all the Elden Ring Artist’s Shack painting locations that we know of so far. If you’re still early in your ventures, make sure you take a look at our roundup of the best Ashes of War you can grab while exploring. We also have a breakdown of great early Spirit Ashes that can aid your adventures.