Unleash powerful attacks by tracking down the best Ashes of War in Elden Ring as early as you can. 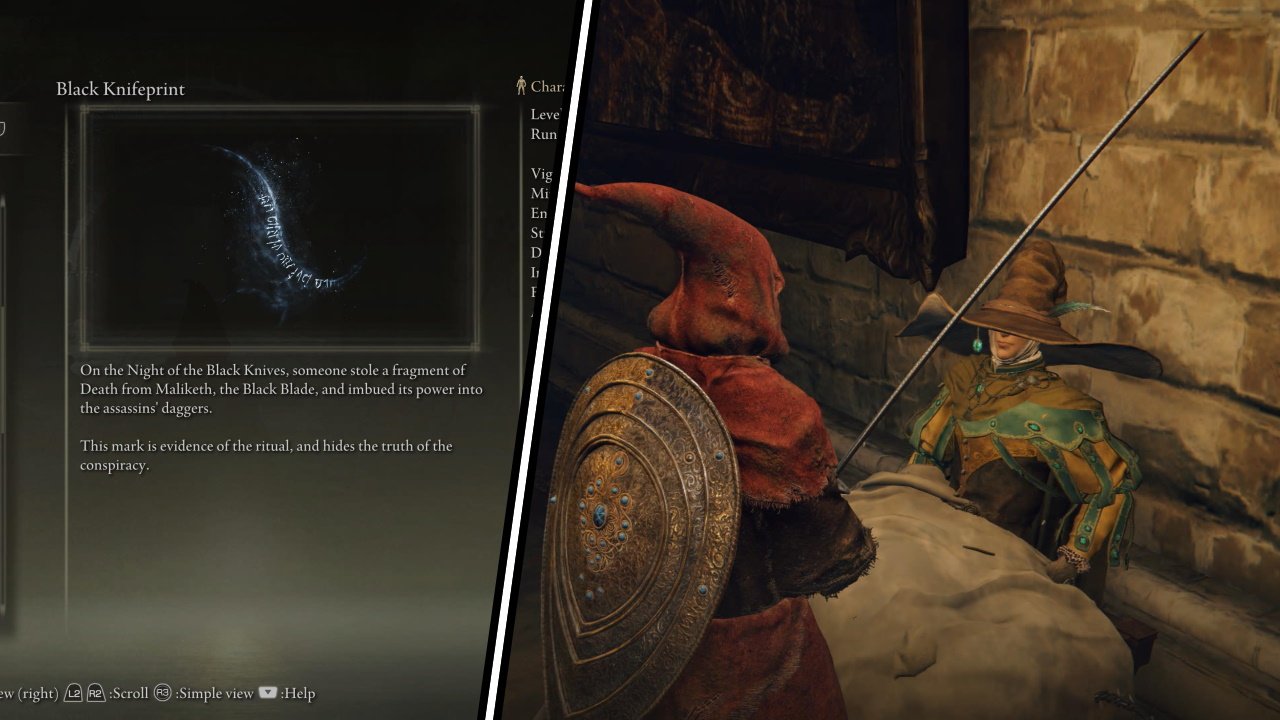 Homage to Sonic The Hedgehog 2 game box art proves this is the best video game adaptation we're gonna get.

One key NPC questline in Elden Ring ties to the sorcerer Rogier. Not only does it reward you with a powerful weapon early, Rogier’s quest will uncover key plot points in the lore and ties directly into the narrative of a few other NPCs. The main catch is that you need to follow certain steps early or Rogier will die and cut his quest short. To ensure that doesn’t happen, we’ll walk you through what to do with the Black Knifeprint and how to complete Rogier’s quest in Elden Ring below.

The Rogier quest in Elden Ring is split into a few discrete chunks, but you’ll need to complete most of them before progressing to a key location in the game. We’ve covered the key points for each step below, along with big decisions like whether to give Rogier the Black Knifeprint. We’ll let you know below when you’re at risk of messing anything up.

The first opportunity to meet Rogier comes in Stormveil Castle’s chapel, a small building you can drop into or enter after you access the main castle compound. He’ll say that he’s looking for something at the castle and also sells three different Ashes of War.

After you beat Godrick the Grafted in Stormveil, Rogier will move to the NPC hub of Roundtable Hold. You’ll find him on the balcony section next to the roundtable room. He’ll explain that, due to his injuries, he can no longer wield his weapon. You’ll then receive Rogier’s Rapier +8, which comes equipped with Glintblade Phalanx, one of the game’s best Ashes of War.

At this point, it’s easy to forget about Rogier’s mission and head off to explore for yourself. Be warned: If you visit Ranni beyond Caria Manor in Liurnia before completing the next steps, Rogier will fall asleep and die, cutting his quest short.

To complete Rogier’s quest, you need to head into the depths of Stormveil Castle. Start from the Secluded Cell Site of Grace and head backwards to the path toward the living jar enemies . It should be through a gouged route in the middle and two raised platforms on either side. Run up the slope and then turn around to take the raised platform on your left.

From the wood at the end, jump across to the ledge poking out from the wall in front. Follow this route along, staying on the higher platforms and watching out for enemies until you eventually  reach the outside of the castle walls. The platform will have a corpse and a message reading “surely what you seek is somewhere close by…”

From here you can jump down the outside of the walls to your left until you can enter a door and then unlock the back door to the Liftside Chamber Site of Grace. That’s a shortcut which will save you some valuable time in future.

Keep making your way down inside this secret path, walking down the sloped beams and dropping onto the wooden platform below. Eventually you’ll reach the base and the depths of Stormveil. There are several rats including one giant rat among the ruined statues down here. Follow the path right to take out the Teardrop Scarab and earn the Rancorcall spell.

Slightly further ahead, you can finally drop down into an arena covered in tree roots and bodies. When you move forward here, an Ulcerated Tree Spirit will spawn, though it technically isn’t a boss. Making use of fire or blood loss will work wonders in the fight, and taking it out will earn you a Golden Seed. Alternatively, you can sprint straight past it to avoid the enemy if it’s too tough for now. Make sure to grab the Stonesword Key in this area, though.

In the room behind the Ulcerated Tree is an unsettling giant body with a flattened, folded head. In this room, pick up the Prince of Death’s Pustule item and inspect the bloodstain on the floor. You’ll see Rogier seemingly grasped by something, lifted into the air and shaken. We’re guessing he found what he was after. Once you’ve inspected that, you can climb the ladder and make your way back to Rogier at Roundtable.

Speak with Rogier at Roundtable Hold and discuss what you saw down in Stormveil’s Depths. After some reluctance, he’ll divulge his research into the the Night of Black Knives, explaining that the body in the depths was part of Godwyn the Golden, and that he’s interested in a Black Knifeprint. As part of his research, he's infused half of his body with Death. Maybe not the best idea, old Rog. Next, let Fia the Deathbed Companion hold you. Talk with her about Rogier and the Black Knifeprint. She’ll give you a map hinting to the Black Knifeprint location. Make sure you use Baldachin’s Blessing afterwards to dispel the health debuff she applies.

Your destination is the fittingly named Black Knife Catacombs in Liurnia’s northeast sector. Inside this dungeon is an optional boss found by riding the second blade trap up to reach the secret platform. Wait for it to slam down, then step on the gap to be lifted up high enough to jump over. Beat the Black Knife Assassin here (you can summon D, Hunter of the Dead for help) and you’ll earn the Black Knifeprint.

Should you give Rogier the Black Knifeprint?

To continue Rogier’s NPC questline, you need to agree to give him the Black Knifeprint. Don’t worry, you’ll get it back shortly. You can then speak with Fia again for a bit more dialogue about Rogier (again, remember to use Baldachin’s Blessing afterwards). Return to Rogier and he’ll say he’s completed his research – it turns out that Ranni the Witch was behind the Night of Black Knives, and caused the deaths of many demigods. Next, rogier is after the mark afflicting her skin as punishment for her crime.

Rogier reckons Ranni is at Caria Manor in the north of Liurnia, so that’s where we’re headed next. This mini dungeon requires that you take on the Royal Knight Loretta boss. If you’re having trouble, we have a guide for that here. Once you beat her, head through the back and find Ranni at the top of the Ranni’s Rise tower.

Ranni will refuse to speak with you further, but if you return to Rogier in Roundtable, he’ll suggest becoming her Vassal. Speak with her again after and she’ll accept your service, starting Ranni’s questline. If Rogier died early, Ranni will accept you as a vassal right away.

The end of Rogier

Sadly, this is where Rogier’s journey comes to a close. After you’ve signed up with Ranni, speaking with Rogier will see him say that he’s falling into a deep slumber. He’ll even apologize for some future trouble that he believes he’ll cause. The next time you rest, Rogier will fall asleep and die. He’ll leave behind a Bell-Bearing, his armor, and a letter noting the whereabouts of D’s younger sibling.

After Rogier’s death, you can speak with Fia again for a little more information on him being a constant companion of hers (don’t forget about that blessing!). If you take on her quest, you’ll eventually face him one last time, though sadly only as a spectral champion who must be defeated.

That’s everything in Rogier’s Quest for Elden Ring. It’s one which unveils some intriguing lore for the world and major players, and will tie in directly with other NPCs you’ll meet on your travels. It’s a shame Rogier’s dabbling with Death led to an untimely end, but this is a FromSoftware game, after all. NPC stories rarely, if ever, end in a warm retirement sipping a flask by the fireplace. By continuing Ranni's quest, however, you can finally convert the Black Knifeprint into the Black Knife, a powerful weapon for Dex and Faith users.