Learn how to equip more spells in Elden Ring by finding Memory Stones across the Lands Between. 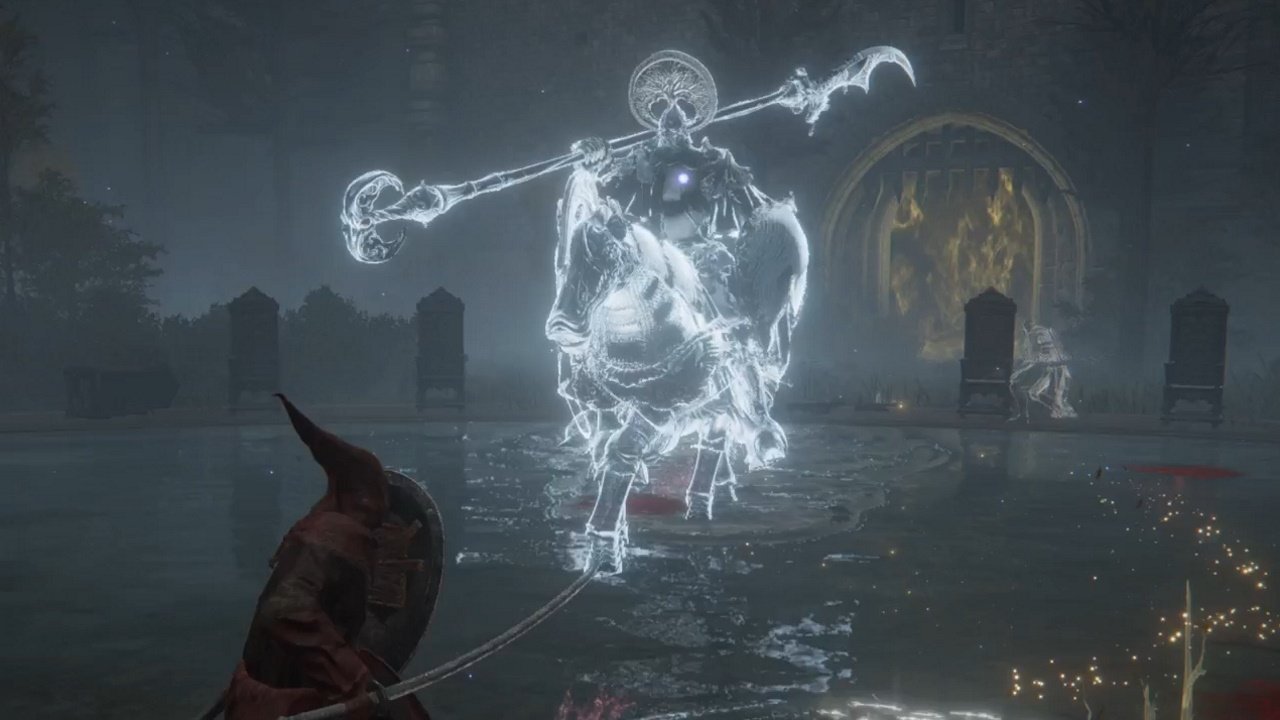 Unleash powerful attacks by tracking down the best Ashes of War in Elden Ring as early as you can.

Explore the unsettling Caria Manor in Elden Ring and you’ll need to face not just hand-spiders but also the Royal Knight Loretta boss fight. This apparition delivers a painful mix of melee and magic, which can make it a serious challenge for many builds to face. Below, we’ll take you through how to beat the Royal Knight Loretta boss fight in Elden Ring with general advice and a showcase of the moves you need to watch out for.

The Royal Knight Loretta boss fight in Elden Ring has two main stages, with Loretta increasing her magical powers during the second phase. She’ll alternate between firing off spells for a distance and leaping close to unleash two or three slices with her glaive.

The main move you’ll need to handle here is Glintblade Phalanx (the array of blades around her head). You’ll need to dodge these at a medium distance before closing the gap once more or risk being comboed by them and another of Loretta’s strikes. They launch toward you after a delay of a couple of seconds, so try to get used to the timing so that you can practice your dodge rolls. Spirit Ashes will also serve as a great distraction for the Glintblade Phalanx, freeing you up to get in and deal Loretta damage.

Equip magic resistant armor and shields: Royal Knight Loretta will be throwing a lot of spells your way during the fight, especially when at range. Minimize their impact by equipping armor and a shield with high magic resistance if you can.

Stick to the central ring:Loretta likes to hop around a lot during this fight, and will often back up or bully you into the trees at the edge of the ring. When that happens, focus on getting back into that central space. You need to see what she’s doing to dodge or counter her moves, so don’t get blinded by a branch in your face.

Stay close until the Glintblade Phalanx comes out: Loretta’s slowest and most telegraphed attacks are her melee swings, which means fighting up close with a melee weapon is actually far easier in this fight, especially during the second phase. When she summons her Glintblade Phalanx, back up and dodge those first before getting stuck in again. Try to stay to her front or side so that you can see which attacks are coming easily.

Summon a tanky Spirit Ashes: We somehow missed that Spirit Ashes were available in this fight, but given you want Loretta tied up in melee attacks, we highly recommend taking a beefy melee Spirit Ashes like Lhutel the Headless if you can afford her. The Skeletal Militia will work as cheaper backup. Check out our Spirit Ashes guide and make sure to upgrade your pick before entering the fight. Avoid the Rotten Stray as we believe Royal Knight Loretta is immune to Scarlet Rot.

Moves to watch out for

Three-hit combo and phalanx: Loretta’s bread-and-butter combo is a three-hit sequence during which she summons a Glintblade Phalanx. It starts with a leaping strike, then a poke, and then Loretta twirls her staff around twice, summoning a Glintblade Phalanx on the first swing then hitting out at you on the second. Look for the blade on the glaive to come around before dodging the final hit. Be patient and dodge all three strikes before attacking. You may take a hit from the Phalanx, but if you have magic-resistant armor equipped, it’ll reduce the effects drastically.

Swing & Slam: Another of Loretta’s basic attacks sees her lunge forward with a low swing before slamming overhead. It’s an easy enough combo to dodge, and it leaves her wide open for a counterhit afterwards.

Magic double slash: Loretta’s blade glows briefly before she leaps forward delivering a one-two hit. She uppercuts on the first during a leap, then lands with a slice in the other direction. Watch for the blade to start glowing and get ready to dodge. Dodge towards her on the second swing to get in close for an attack.

Phase two: Once she reaches 50% health, Loretta will begin unleashing faster and more powerful magic attacks, including Loretta’s Greatbow. During this phase, it’s more important than ever to stay close to her, as her magic blasts become increasingly tough to dodge. She’ll also double her Glintblade Phalanxes, equipping two sets at once. They’ll fire out of sync, giving you time to dodge one then the other. You can avoid them at range by sprinting sideways.

Loretta’s Greatbow: Loretta’s horse rears back as she charges a massive arrow. This deals enormous damage but is pretty easy to dodge if you don’t let it scare you. She’ll fire around 1.5 seconds after the bow appears. Use this time to close in on her. Loretta occasionally fires this at the end of a combo, while jumping in the air.

Magic Missile: Stray too far from Loretta in phase two and she’ll begin unleashing a lengthy sequence of homing magic blasts, often in addition to her Glintblade Phalanx. These can prove relentless, so try to run diagonally forward to avoid them and close in enough for her to stop. Don’t roll or you’ll likely run out of stamina and be caught.

For beating Loretta (the first time), you'll have proven yourself worthy of wielding a few of her moves. That includes the mighty Loretta's Greatbow and a fancy Ash of War.

That’s pretty much all we can teach you for how to beat the Royal Knight Loretta boss fight in Elden Ring. She’s a cool enemy, but one that most players should be able to handle if they stick close and force her into slower melee strikes. After you’ve beaten her, consider heading north up the Liurnia chasm to take on the Magma Wyrm Makar boss fight when you’re ready.