Summon powerful allies by tracking down some of the best Spirit Ashes in Elden Ring available in the early game. 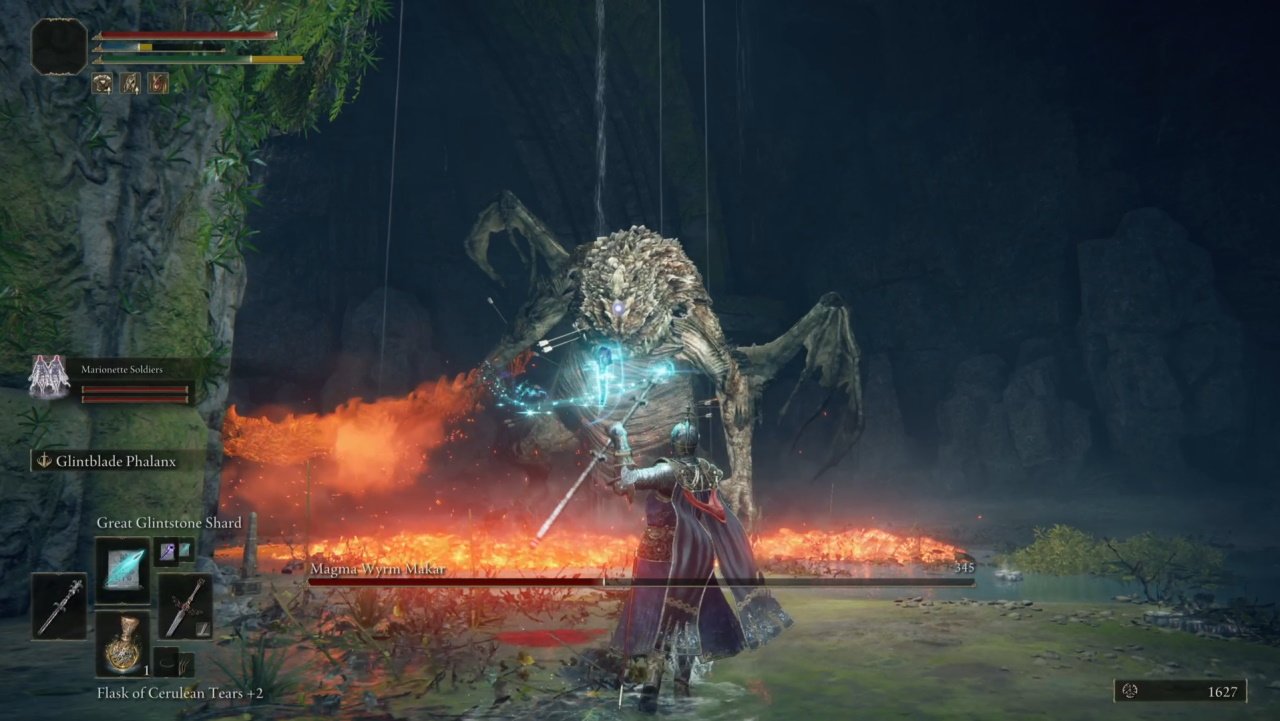 These best early game sorceries will add some magical firepower to your arsenal in Elden RIng.

The Magma Wyrm Makar boss fight, and likewise both other Magma Wyrm boss fights, will see you avoiding attacks from a giant stompy lizard which spews out lava, hurls fireballs, and tries to smash you with its giant blade. The good news is that is has a very limited moveset which you can learn and exploit

Use magic: All variants of the Magma Wyrm are highly susceptible to magic damage. If you have access to magic attacks, you’ll have plenty of time to unleash them for major damage during this fight. Similarly, applying Magic Grease can boost your damage too.

Distract with Spirit Ashes: Spirit Ashes aren’t likely to survive a full fight with the Magma Wyrm, but they’ll serve as a brilliant distraction during its first phase. Let them draw aggro and move behind the Wyrm to strike its rear legs. Be wary of its tail swipe as it changes target. Ranged ashes are best, as they can pepper the Magma Wyrm to eventually break its focus for a critical hit and force it to move around the arena.

Equip fire resistance: The Magma Wyrm will cover a lot of the arena in lava during the course of a fight. While your aim is to avoid stepping in it at all, equipping a fire resistance talisman or armor with higher fire resistance will grant you more protection against accidentally burning your feet.

Use the room you have: The Magma Wyrm Makar boss fight takes place in an enormous cavern, giving you plenty of room to maneuver. You’ll have plenty of time to summon Spirit Ashes and apply buffs before he arrives. The other Magma Wyrm boss fights take place in much smaller arenas, forcing you to get up close with the Magma Wyrm early. Here, wait for the boss to charge around the arena before you take the time to summon.

Be patient, and prepare to dodge: All of the Magma Wyrm’s attacks are slow, high-damage moves with a lot of windup. As soon as you see the Magma Wyrm begin an animation, stop attacking and prepare to dodge when you see the swing come. You’ll likely need to dodge an attack to get up close, but so long as you watch the boss, you’ll get plenty of warning.

Be wary of two-phase attacks: A few of the Magma Wyrm’s attacks with its blade see it attack forward, then drag its blade back towards it along the ground. The backwards drag deals heavy damage, so be prepared to dodge a second time.

The regular Magma Wyrms share their moveset with Magma Wyrm Makar’s first phase. Many of the boss’ phase one attacks involve slamming in front of him with his large weapon. Watch the windup and only dodge when you see the swing coming. Here are the key moves to watch out for.

Stab & drag: The Magma Wyrm pokes its weapon forward, pauses and roars, then drags the blade back along the ground. The backward drag is easy to miss and deals hefty damage. Dodge sideways rather than forward to avoid the followup.

Slam: The Magma Wyrm lifts up its arms before slamming down with two hands above its weapon. This is an AOE hit which covers a wide area. If you’re up close, you’ll need to dodge to avoid this attack. For melee builds, dodge towards the wyrm. For ranged builds, dodge away to build space.

Fireball: The Magma Wyrm rears up and fires a ball of fire at you from a distance. This attack is slow and easily avoided by side pedaling. If you’re a melee build, run diagonally forward to close ground when it uses this move.

Lava charge: The Magma Wyrm charges in a line, spewing lava as it goes. Don’t engage while it’s charging. You can spot this attack coming when the Magma Wyrm raises its head with fire in its mouth. It’ll charge in a line up to three times, dealing damage to anything it hits. Stand back and use ranged attacks if you have them, or wait for the charge to finish.

Tail spin: The Magma Wyrm raises its front half up, then spins 180°, Swinging its tail and weapon. Touching any part of the boss’ body will result in massive damage. This is by far the hardest move to see coming, as it’s performed when you’re attacking it from behind. Watch for the front half to raise up and prepare to block or dodge backwards.

Starting at around 50% HP, phase two of the Magma Wyrm Makar boss fight sees it coat its weapon in lava for extra damage and begin standing upright. Its moveset shifts, but the slow swings still mean patience and single dodges are the way forward. Regular Magma Wyrms don’t seem to enter this phase, instead opting for more lava charges and fireballs. Most sword swings can be dodged in the usual way, but here are two key moves to watch out for.

Transformation: At the start of phase two, Makar will vomit lava all over its blade. This also covers the ground in front of him. If you’re up close, sprint behind the boss to hit it while it’s performing this transformation or you'll get covered in lava too.

Spin & slam: The most comical move in Magma Wyrm Makar’s arsenal. It spins 360° on its butt before slamming its sword down straight. Wait for the full spin before you dodge to the side.

That’s all our advice for how to beat Magma Wyrm Makar in Elden Ring. The oversized lizard is intimidating, but its slow moveset makes it vulnerable to speedy dodges once you learn the moves it performs. If you haven't beaten them already, check out our guides for taking down Rennala and the Ancestor Spirit next!